Fans of the Delta Wing know that designer Ben Bowlby is a big fan of ‘Boundary Layer Adhesion Technology’, or BLAT, which is a feature of the wingless Delta Wing’s aerodynamic package.

BLAT was invented in 1980 and ‘81 by Dan Gurney and All American Racers engineers John Ward and Trevor Harris who developed the unique Eagle Indycars of those days. Mike Mosley qualified AAR’s ‘81 Eagle-Chevy in the middle of the front row at Indianapolis that year, then scored a stunning victory on the Milwaukee Mile the following weekend after coming through the field from the back of the grid to win as he pleased by over a lap.

“Mike just picked ‘em off one at a time,” Gurney recalls. “He passed them on the inside or the outside. It was a phenomenal display and really, on that day, we had no challenge. We were mighty stoked. Milwaukee was something you don’t see very often. That was a very memorable win.”

Later that year Rocky Moran led the CART race at Watkins Glen aboard AAR’s Eagle-Chevy before a refuelling gaffe and Geoff Brabham drove the car at Riverside, qualifying on the pole and running away with the race until a wheel nut was cross-threaded during a pit stop.

The BLAT Eagle-Chevy is Dan’s favourite Eagle because it represents everything that he and All American Racers always stood for. The car was completely different from conventional thinking, highly innovative in a number of ways and the maverick Eagle-Chevy package was entirely competitive with, and sometimes a good deal better than, the turbo Cosworth-powered opposition in 1981. The ultimate compliment to its success was that it was banned!

Most CART teams ran turbocharged Cosworth DFX V8s in those days but AAR typically went a different route developing its own normally aspirated Chevrolet stock-block engines built around Donovan aluminium blocks. The Eagle chassis was completely unlike the other top cars of the time from Penske, Chaparral, Coyote, March, Wildcat and Phoenix. Everyone else was in the midst of developing classic, ground-effect cars based on the Lotus 79 concept with underwings or ‘tunnels’ creating a low pressure area under the car. The basic concept remains true today.

But AAR found a different way to create downforce and Gurney, Ward (above) and Harris produced a car that was at least as effective as the traditional ground-effect cars. The idea had also been employed with Harris’s championship-winning Frissbee CanAm car raced by Al Unser Sr and Jr in 1980 and ‘81. Compared to its competitors the BLAT Eagle presented a very different nose to the wind and also enjoyed a strikingly different overall shape. Instead of ducting air underneath the car into an enclosed venturi or underwing in the traditional ground-effect method, the BLAT concept generated twin vortexes through its underbody and the trailing edge of the rear bodywork, aided by a very efficient exhaust cooling system. The routing of the engine exhaust system added further energy and downforce to the airflow, and variants of this concept have been used off and on in Formula 1.

The Eagle’s success prompted other top teams like Penske and Truesports to build experimental Chevy-powered cars. Suggestions were made that it would become necessary to have turbo engines for ovals and stock-blocks for road courses, therefore pushing up costs. Eventually, CART solved what they perceived as a problem by writing first the BLAT aero concept and then stock-block engines out of the rulebook.

Gurney and many others regard that ruling as the beginning of the road to the arrival of the spec car plague in Indycar racing. From then on the layout of an Indycar, including the aerodynamic package, was essentially defined by the rulebook. Of course, F1 has gone in a similar direction, strictly defining for many years the general parameters of chassis, aerodynamics and engine design.

“It put a huge damper on creativity and what I think the fans want to see, and still would love to see today,” Dan remarks. “But it didn’t matter. A few powerful guys knew it was good for them. They didn’t care what was good for the sport. All the creativity that went into that car and engine package was wiped out because it was too good. They said we don’t want to go down your path and build cars and engines like that. We want to go down our path, and we have the power to make the rules.”

Thirty years later the BLAT concept has been reborn as a component of the Delta Wing. “We’ve adapted the area, ratio and vortex-spilling side profile of the ‘81 Pepsi Challenger to the Delta Wing,” Ben Bowlby commented. “The car pulled the best numbers we’d seen in the first run with the BLAT stuff with the car running at high ride height. At low ride height it wasn’t as efficient but it had a lovely characteristic inasmuch as the downforce increased as the car rose higher off the road and when the car was car going through the corners at lower speed it was making the maximum downforce.

“And it had a fantastic nose-up, anti-lift characteristic because the power of the vortexes maintained the forward downforce if you did have a nose-up excursion, which Michael Krumm proved when he launched the car off a kerb in practice at Le Mans.

“Following the BLAT path was a great way to go,” Bowlby added, “and a great homily to the genius of Dan Gurney, Trevor Harris, John Ward and their team of people who did this 30 years ago only to have it banned for being too good an idea. So it’s very fitting that the BLAT concept has a new lease of life on the Delta Wing. Dan and his people take great satisfaction from it, and rightfully so.” 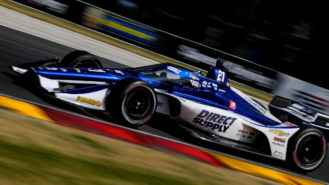 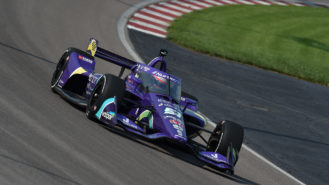