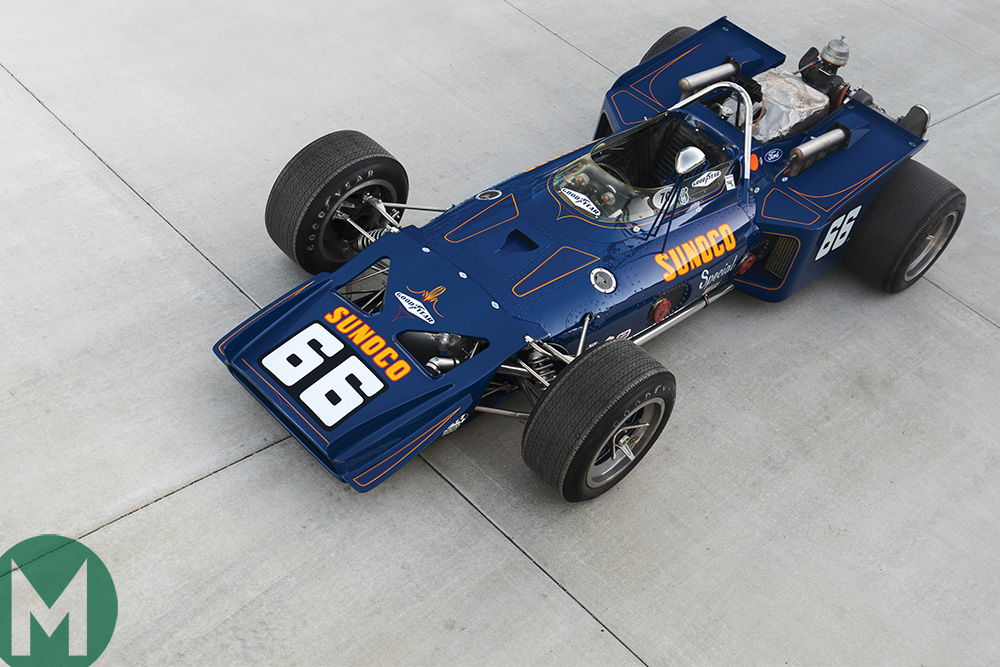 “The race itself was anticlimactic,” Mark Donohue wrote of his 1970 Indy 500 second place in his excellent autobiography, The Unfair Advantage. “I just drove around most of the day while other cars fell out, and I ended up second behind Al Unser.”

The car that took him to the podium is an important, and unique, one. Effectively a Lola T152, Donohue and Penske sent their 1969 car back to Eric Broadley’s Lola base with a list of required changes. More specifically, swap out the four-wheel-drive for a two-wheeled one, and bolt a Ford V8 in place of the Offenhauser motor.

Returned, and painted in famous Sunoco blue, it was christened T153 and this month could fetch more than half a million dollars at RM Sotheby’s Monterey auction.

Its first runs in Phoenix hadn’t been so smooth. A piece of paper between the points, noticed only after two days of investigating the V8’s failure to start, foiled things.

The motor would prove yet more frustrating, following the Indy 500 with a non-finish at Ontario. Overheating problems had required more and more coolers, which succeeded more in slowing the car down with extra weight than actually cooling. A holed piston confirmed Donohue’s point to a disbelieving Penske that the motor had blown a lap before.

The following season, Donohue “just motored around in the middle of the field” at Ontario to claim sixth before retiring from Trenton with a failed transmission.

David Hobbs had since signed to drive the car for one of the three 500s: Indy, Pocono or Ontario, while Donohue took the new McLaren M16. “I went for Indy,” Hobbs recalled earlier this year in a Royal Automobile Club Talk Show. “It was easier than I thought – daunting, but still not as bad as I thought – because the banking isn’t really that steep. We both did literally thousands of miles all through the month without any problems at all and then for some reason, which is most un-Penske-like, they put lightweight gears in for the race.

“Mark walked off into the distance and then the gearbox broke, so he parked it down between three and four. In those days they didn’t bother with all the safety car crap, you know, so he just parked it and walked back.

“About half an hour later mine broke coming out of Turn 4 with a guy called Rick Muther right behind me. All of sudden my car made this awful clattering noise and obviously stopped going forward.

“I put the clutch in – I actually thought the engine had blown – and I’m looking in the mirror thinking ‘where am I going to park this thing?’ because I’m on the outside of the road and I’ve gone past pit in. I thought I’d better just pull down on the grass at Turn 1.

“Now, I look in the mirror thinking ‘where’s old Rick gone, because he was right there’ but when I slowed up he had swerved, hit the wall and then clipped me just about by the left rear wheel and we both spun down the track. Neither of us was hurt and then I ran back to the pits across the road because our big fear in those days was fire. I had just filled it up, so I was ready for the off.

“I didn’t judge the distance between myself and Turn 4 very well I must have temporarily lost my sense of speed because when I leapt onto the pit wall AJ Foyt missed me by that two inches!

“Roger had gone from leading the 500, I would have been Rookie of the Year and I probably would have finished seventh, and instead ended up with two wrecked cars.”

The Lola’s time had come and it was sold to Leonard Fass, with whom it stayed for the next 25 years. The McLarens, like they had a few years before in Can-Am, had taken over.