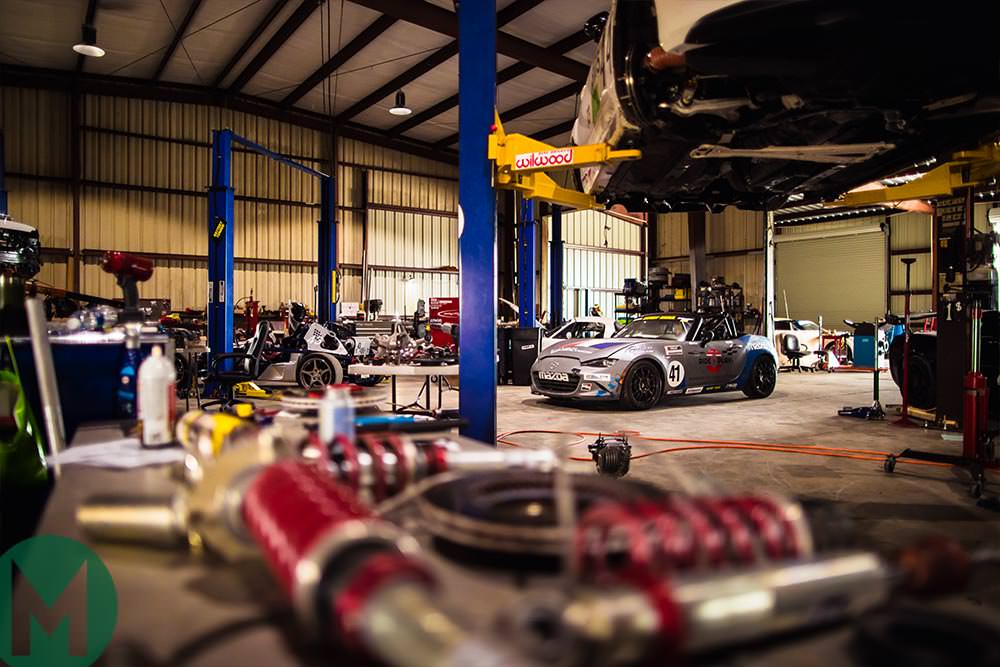 What follows simply wouldn’t be possible in the UK.

Those who have read the April issue of the magazine will hopefully know that Mazda’s market share of grassroots racing, club racing, whatever you want to call it, is a startling 55 per cent. Fifty-five per cent.

It’s hard to imagine every other race car in the UK having the same badge on its nose, with the vast diversity we enjoy.

Mazda has capitalised on that majority share by initiating a Road to Indy scheme as recently as 2010, helping drivers graduate from USF2000 right to the top of the American ladder, IndyCar. The current poster boy is Spencer Pigot, Ed Carpenter Racing driver in IndyCar and factory Mazda IMSA racer.

“Without Mazda and the scholarships on offer there’s a very, very slim chance that I would have made it as far as I have,” believes Pigot. “I’m really fortunate that it started just as I was approaching that level, graduating from Skip Barber into USF2000. I was right on the cusp of all that starting out.

“You just get that little bit of hope that it’s going to happen. Obviously you’re not going to win the championship every year but it gives you that chance that when you do step up you can attract that little bit more funding.”

The genesis of Mazda’s programme was the 1980s, according to US motorsports director John Doonan, and it was the willingness to stick to and believe in the strategy that paved the way to its current position. “Mazda has been dedicated to the customer and their experience. It’s always about them and making sure they’re satisfied and that we’re giving them opportunities. It also starts with great road cars, be that the MX-5 Miata or the historic rotary cars.”

The ladder is, in fact, more a rising forked path: one way to IndyCar, the other leads to IMSA. The Road to 24 scheme focuses on the sports car drivers, and even symbolically gives its name to the stunning Mazda RT24-P Daytona Prototype international car that came so close to a podium at Sebring under Team Joest’s stewardship in only its second race.

Mazda stumps up prize money to help its MX-5 Cup drivers reach that next step or simply just continue to compete, another unheard of in the UK. As a result, the Road to Indy programme’s $200,000 pot and various scholarships attract entrants from all over the world.

Pigot: “The primary benefit of the scholarship obviously is the money. But Mazda takes everyone under their wing, whether you’re the USF2000 scholarship winner or the Indy Lights scholarship winner, they provide you with media training, and if you want to learn about sports cars they’ll give you tickets to Daytona, and just try to expose you as much as you can.”

But there’s no obligation to spend it on your own next race car, as shown by the MX-5 Cup’s most successful driver ever and now team owner of front-running team Sick Sideways Racing, John Dean II.

He’s expanded his base, which is found just around the corner from Sebring Raceway, having won the championship and big prize fund in 2015 to give him a future and a living rather than simply spend money on racing.

“Looking back at it now,” the likeable former Skip Barber instructor says in his vast office, “it’s almost impossible to have dreamed about what we’ve achieved in the seven years that we’ve been in business. I had no money; I took a $5000 loan when we started from my brother and I paid half of it back – he wouldn’t accept the other half.

“Then winning the Mazda prize was good timing. The money allowed me to get two of the new Global Cup cars, fund the next year’s racing and grow the business. Most of that was probably spent on spare parts to get started with all the customers we had. That side is now a profitable side of the business, it took time but we finally got there. We’re definitely one of the teams that you need to beat: it’s Sick Sideways or MMR. We like to be the guys everybody hates.”

Grassroots racing in the US is no small undertaking. Florida-based SSR race all over the country on the support bill of IndyCar, and that can mean the best part of two weeks travelling to and from race circuits. As a result, independent teams have all but disappeared from the MX-5 grid, highlighting the importance of his team’s well-timed growth.

“It’s tough for the privateers,” he says, “we’ve seen pretty much all but maybe one go.

“Ballpark budget is probably $130,000 for the season not including travel and lodgings. You can save a lot of money by doing it yourself but that’s a lot of work. You have to have yourself or someone else take off all those days around the events, some take 12 days. Not many can take 12 days out of their schedule.”

For the prizes at stake, it seems an easy decision to make for the career drivers, especially when those at the foot of the pyramid look up to drivers such as Pigot at its very peak.

“I have the best of both worlds,” he admits. “Now I get to do IndyCar full time and do the long races in IMSA. Mazda was a big part of getting me to Indy, but once you’re there then you’ve graduated. You’re on your own.

“The programme is now attracting people from Europe and South America, whereas five or 10 years ago we were getting guys that just wanted to go straight to IndyCar or Indy Lights. Now you’re seeing guys start a lot earlier and work their way up.”

Dean perhaps sums it up best: “You can race something other than a Mazda in the States,” he says walking past a covered Radical, uncovered Corvette and Viper, “but why would you with so much on offer?”

It’s that factory commitment, the financial backing, so lacking in the UK. It’s the very reason this simply couldn’t happen here.