It was the Australian’s first Sprint Cup victory in 105 starts and he became the championship’s fifth first-time winner this year. The 34-year-old led more laps than anyone else in the race, pushing his way past Brad Keselowski on the final restart to score Richard Petty Motorsport’s first victory since 2009.

Ambrose has been the man to beat in most of NASCAR’s road races in recent years. He won the second-division Nationwide race at the Glen in 2008, ‘09 and ’10. Marcos has also finished second or third in each of the Glen’s last three Sprint Cup races and was leading last year at Sears Point (Infineon Raceway) but stalled the car while saving fuel under a late-race yellow. So it was a great relief for him to at last achieve his goal of winning a Cup race.

“I know I’ve tripped over myself once or twice trying to get to victory lane,” he said. “It’s not that I was worried, but the word ‘choke’ was starting to creep into the back of my mind. I’ve tried for two and half years and we’re going onward and upward from here. It’s a proud day.”

Ambrose won the British Formula Ford championship in 1999 and took consecutive Aussie V8 Supercar titles on home turf in 2003-04. In ’06 he made the move to NASCAR with JTG/Daugherty and Michael Waltrip Racing.

At the end of last year Ambrose joined the reconstituted Richard Petty Motorsports team, alongside AJ Allmendinger and with Ford cars and engines.

With Ambrose’s victory, Petty’s team has now won 274 first-division NASCAR races over 62 seasons. But in recent decades the team has been much less successful, winning only eight races in the past 26 years. Petty merged with Gillett Evernham Motorsports in 2009 but the partnership did not go well, and when Gillett ran into financial trouble Petty invested several million dollars to buy back his team and enter a new partnership with Andrew Murstein and Doug Bergeron’s DB Investments. Murstein is president of Medallion Financial, which finances the purchase of taxi medallions in New York, Boston, Chicago, Newark, Philadelphia and Baltimore.

RPM is a small team with fewer than 50 employees. The highly regarded and experienced Robbie Loomis runs the shop and veteran Todd Parrot is crew chief on Ambrose’s car. Roush-Fenway Racing, Ford’s top NASCAR team, supplies most of RPM’s chassis and the engines are built by Doug Yates, also a long-time Ford man.

“You have to admire Richard Petty,” said Ambrose (above). “He saved the company single-handedly. He propped it up when it needed to be kept going and put good people in place to try and reorganise the company – and it’s been done. It’s great to see and I’d personally like to thank Richard and his family and everybody at the team who have persevered through all that adversity and come out the other side stronger. I’m privileged to be working with him and I hope he’s proud of me.”

Ambrose is a driver rarely without a smile and has become one of the most liked and respected men in NASCAR today. He will celebrate his 35 birthday on September 1 and appears to be in the prime of his career. 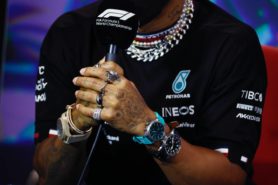 'I don't realise I'm 50,' says Jacques Villeneuve as he qualifies for Daytona 500

Jacques Villeneuve said that qualifying for the Daytona 500 ranks just behind winning the Formula 1 world championship and Indy 500, after securing his place in this year's NASCAR classic.…