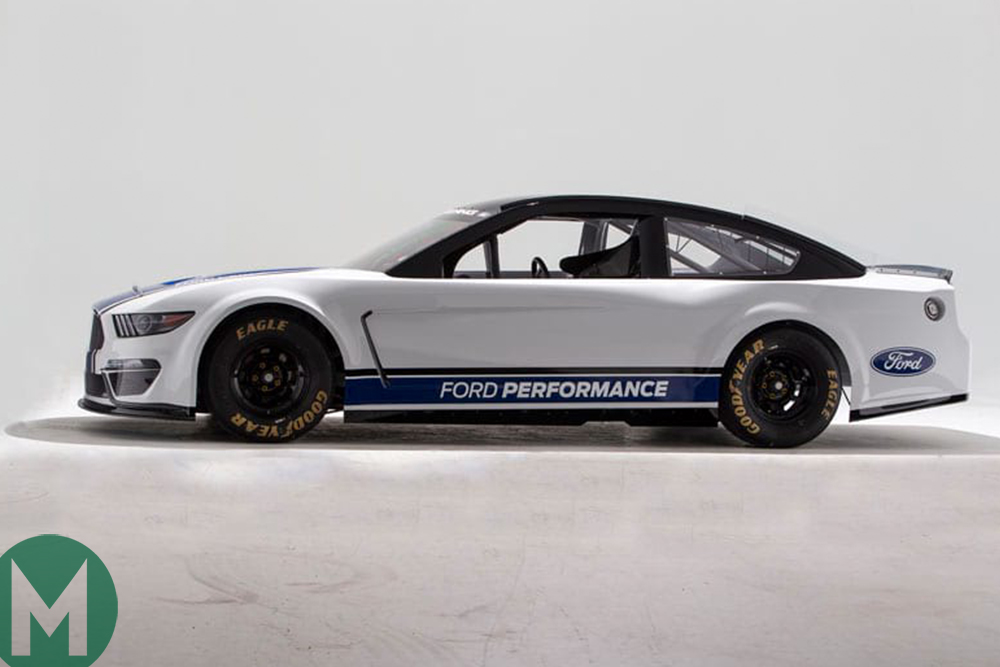 NASCAR Cup Series cars currently uses naturally-aspirated V8 engines, which Rushbrook says will remain in the motor sport for years to come. But change is on the horizon, he adds.

“Do I think there is a time and a place to introduce alternative power trains in NASCAR, whether it’s a different internal combustion engine architecture or hybrid? Yes I definitely think there is, and I don’t think it’s necessarily that far away.

“For now, however, we think the V8 is still very relevant. We have a lot of cars including the Mustang itself that has a naturally-aspirated V8 and a lot of [pick-up] trucks.”

Ford will introduce the Mustang into the NASCAR Cup Series this year, starting with the Daytona 500 on February 17 and Team Penske Ford driver Brad Keselowski said last year that hybrid power belongs in NASCAR.

He touted a Formula 1-style KERS system installed in the V8 stock cars, increasing power output to 1000 horsepower, deployed in a push-to-pass system.

“There’s no point putting a hybrid power train in the Daytona 500 because the format of that race requires wide-open throttle,” explains Rushbrook.

He also implies, with a generic comment, that NASCAR’s three manufacturers – Ford, Chevrolet and Toyota – are in the early stages of exploring the idea.

“As manufacturers, we all have regular open dialogue with NASCAR and our teams and each other about the state of the sport and the future of the sport. There are a lot of discussions about all aspects of the sport.”

For now, however, the naturally-aspirated V8 is here to stay; it’s the appearance of the cars that matters more to manufacturers, especially given the old adage: ‘win on Sunday, sell on Monday.’

More: Ford to roll out Mustang for NASCAR 2019

But does that phrase still ring true?

“There’s definitely data there that does support it – it’s not necessarily that we race a Ford Fusion and the fans go and buy a Fusion on Monday; they more typically will go buy a Ford F150 or other cars.

“We’re demonstrating the capabilities of our brand and we believe that there is a strong connection between our performance on track and the brand.

“Today, the naturally-aspirated V8 engine is working well in NASCAR.

“I think we can get some more relevance with the car itself in terms of the architecture of the car, to make the body look even more like the production body, or change the suspension aspect of it.

“It’s certainly got an opportunity to add a hybrid, though. I believe that with the correct implementation and introducing it in the right way, it would [resonate with fans].”

As for the World Rallycross Championship, Ford withdrew its support of factory team Hoonigan in 2018, but with full electrification of WRX coming from 2020, Ford could give its support to the championship.

“We continue to talk to IMG and the FIA and other OEMs to see who is commiting to it, and we’ll come to a decision in March,” says Rushbrook.

“We withdrew in 2018 because that programme has served its purpose well for the Focus RS.

“We do continue to study the possibilities for electrified motor sport, and rallycross is one of them.

“It makes sense as a good place to race full electric cars given what the event is: the performance, the duration and the passion or explosiveness of the cars.

“We think that could work really well on a full electric platform for motor sport. There’s a deadline coming up to commit to that.”

As for the World Endurance Championship’s incoming hypercar regulations, Rushbrook says that Ford participated in early meetings over the rules but pulled out as it wasn’t “an appropriate place for [Ford] to be racing.”