Sprint Cup leader Jimmie Johnson is in no mood to slow down, he tells Gordon Kirby 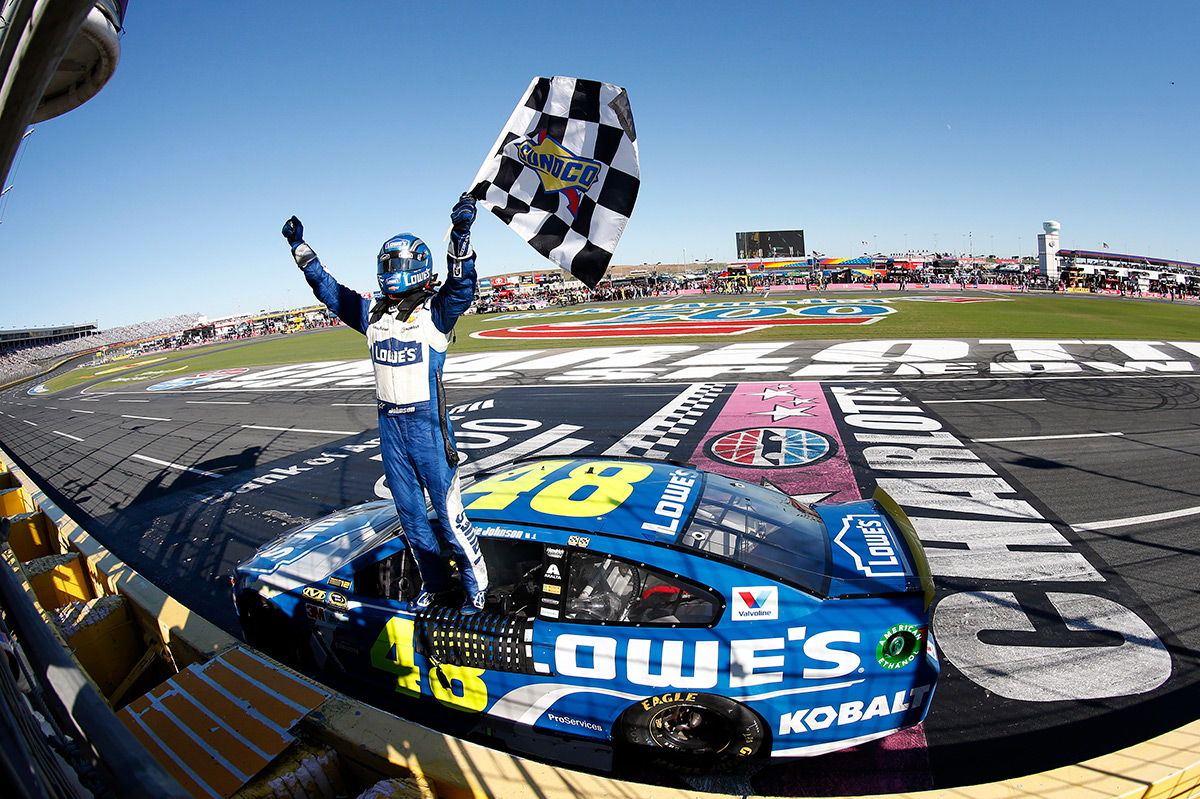 Born and raised in California, Johnson has been racing at NASCAR’s top level for 16 years, all with Rick Hendrick’s eponymous four-car Chevrolet team. Johnson was spotted and selected by Hendrick’s team leader Jeff Gordon, who mentored Johnson through his first few years in Sprint Cup cars and remains a co-owner of Johnson’s car after retiring at the end of last year.

Johnson is an amiable, soft-spoken fellow who rarely loses his cool. He’s also a complete gentleman, far removed from the traditional image of a rough-hewn Southerner. Johnson is a clean, precise driver who is renowned for his ability to analyse a car’s handling and feedback to his long-time crew chief Chad Knaus.

“I think one of my big assets is that through all the chaos inside the car I’ve always been able to communicate my feeling for the car,” Johnson says. “Maybe I don’t know how to fix it, but I can understand what I’m feeling. I’ve been surprised that Chad has been able to understand everything I’ve said to him over the years. That’s really been the beauty of our relationship. I can be very descriptive and analytical but it’s understanding what I’m saying that is the key and Chad is the guy who has been able to do that.” 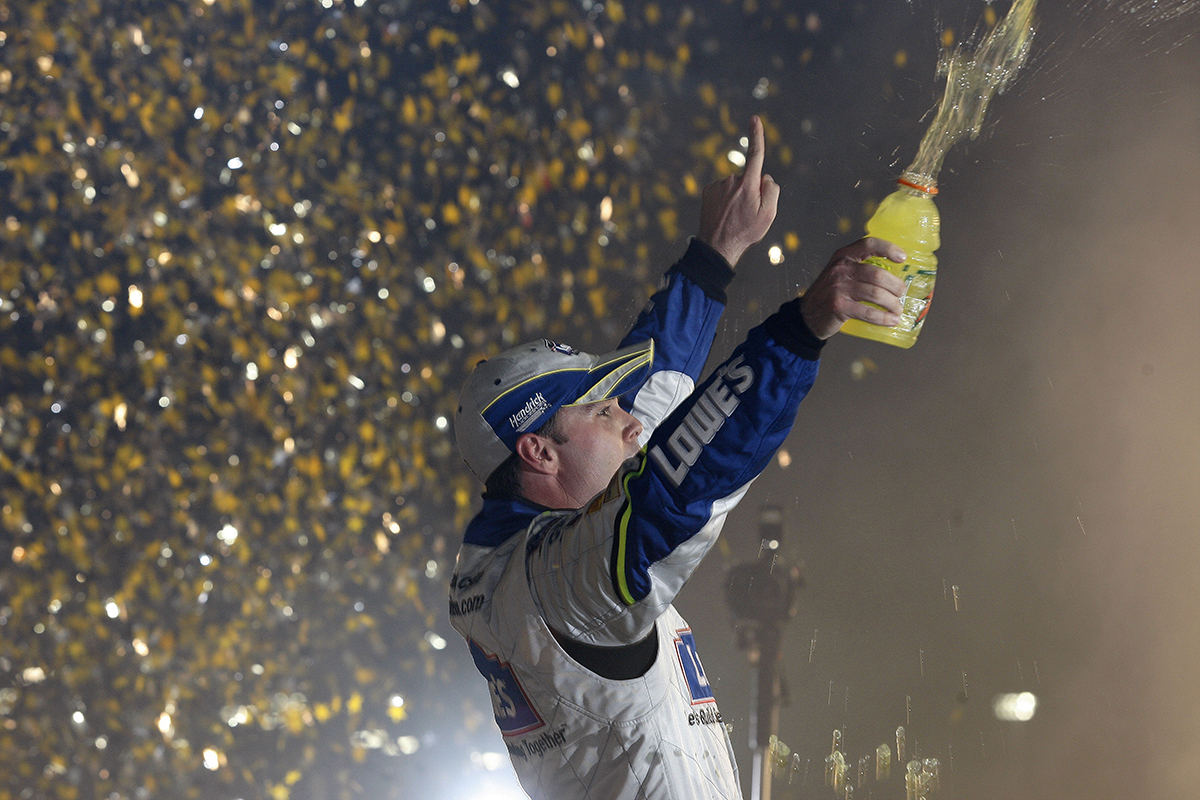 Johnson celebrating his 2007 title at Homestead

Johnson, Knaus and Hendrick’s team dominated NASCAR from 2006-2010, winning five consecutive championships. He’s been a little less effective in recent years, but has continued to win races every year and took his sixth title in 2013. This season started well as he scored his 76th and 77th career wins inside the year’s first five races. But then followed the longest win-less streak of Johnson’s career as it took 24 races before he scored his 78th win at Charlotte a few weeks ago marking himself as a serious contender for this year’s NASCAR championship.

“There are times when you’re on top and deserve all the accolades that you and the team receive,” Johnson remarked. “And there are times when you’ve got to dig deep and re-create yourself and your team. The last couple of years haven’t been the most productive for myself or Hendrick Motorsport, but the commitment to getting back on top and the work and time and effort that’s going into it is pretty darn amazing. We’re making progress all the time. We’re getting better and we aim to be in the battle for the championship.”

NASCAR’s philosophy is almost diametrically opposed to Formula 1. NASCAR’s goal has always been to restrict technology as much as possible and to encourage close, competitive racing among as many cars as possible.

“I love F1 and all the technology,” Johnson grins. “I love the concept of building the fastest vehicle, but that’s not what NASCAR is. Our sanctioning body wants to put on an entertaining event. So they want to keep technology out. They intentionally want the cars to drive poorly in order to put on a better show. Everything in NASCAR is aimed at putting on a good show for the fans.”

NASCAR allows its teams to use electronic data systems during testing but data gathering and telemetry is not permitted at the track on race weekends. “By design NASCAR tries to limit what we do,” Johnson says. “But we use every tool that F1 teams have to make our cars perform better within the limitations that we’re allowed. Although we can’t run data on the cars on race weekends, we collect data at every point in time we can otherwise. We have simulation programs, seven-poster rigs, wind tunnels, rolling road wind tunnels and CFD models. We use everything F1 does but you can’t connect the two worlds.

“In NASCAR, the driver ends up being the computer. It’s my job when we come to the track to go racing to validate all of the virtual testing that we do during the week. One thing I am very proud of is the human element in NASCAR. You really have two different worlds, the virtual world of modern technology and the limited use of all that stuff at the races. I’m the one that has to flow between those two spaces and help Chad and the team point it all in the right direction.” 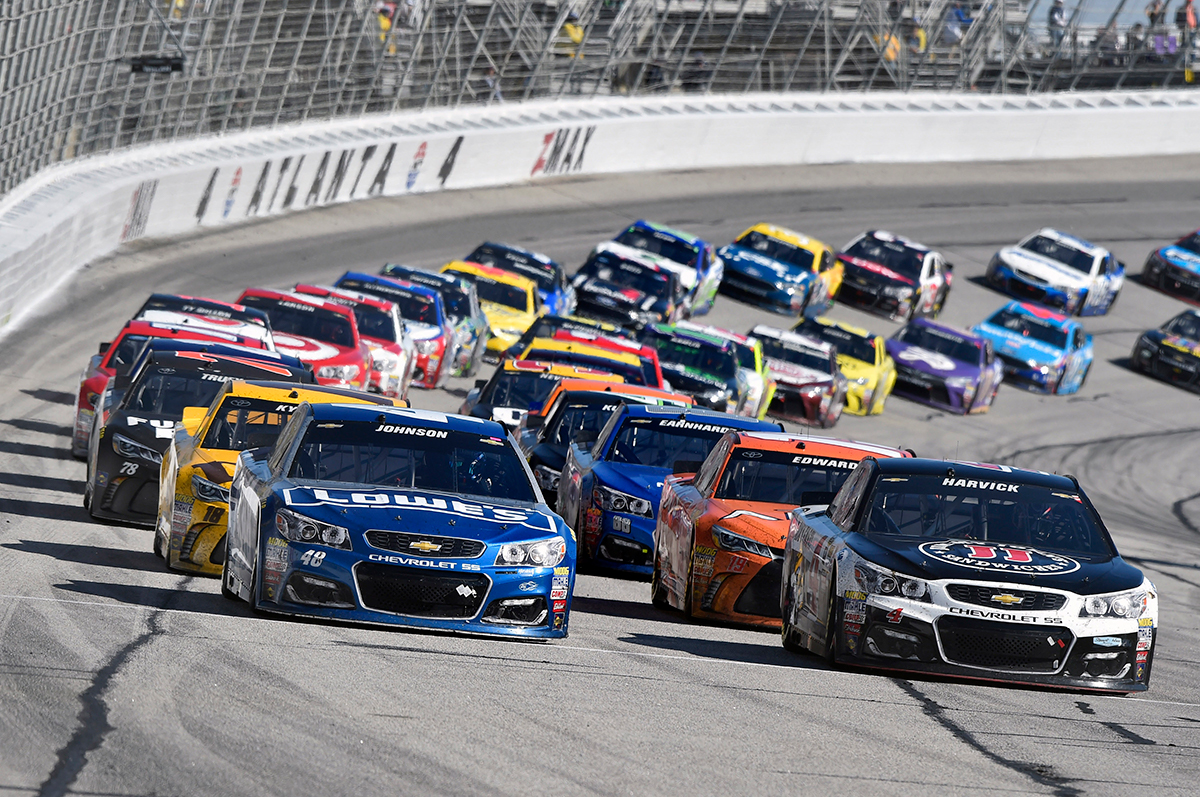 This year NASCAR has mandated much smaller spoilers and splitters, cutting downforce by as much as 30 per cent. The result has been much better racing for both drivers and fans. Johnson was a big proponent of the move to low downforce.

“I think taking the downforce off the cars has worked very, very well in all cases,” he declares. “Ironically, there are some tracks where it doesn’t show up as much as we thought it would. But I think on the tracks with abrasive surfaces the low downforce package has put on the best racing we’ve had for years and years from each of driver, fan and statistical perspectives.”

NASCAR’s schedule is the longest in all of sport covering 10 months and 36 races, plus three special events making for 39 race weekends each year. “It is very demanding,” Johnson admits. “Right now we have three weeks off during the season and an eight week off-season. That’s pretty short! If I could find another four or five weeks it would change my quality of life. But it is what is and you’ve got to make the best of it.

“I spent many of my younger years just wanting to race each and every weekend. I guess having a family has certainly changed that. I’m 41 now and I do have other interests in life. The 39 races in total do take a toll on that. This is my 16th season racing Cup cars. As you can imagine, the walls of my motorhome get awfully small, but I find things to do at each track. My ‘bike is always in my bus and I go out for a couple of hours of riding whenever I can and explore the local countryside.”

Johnson says he sees no signs of retirement anywhere on his horizon. “My wife and two young children prefer to stay at home rather than travel all the time and that makes it difficult sometimes,” he says. “But I’m all-in with racing. If I wasn’t racing Cup cars all the time, I’d be racing something else. I can’t see myself racing full-time in Cup cars when I’m 50. I guess there’s an end out there that’s closer than it’s ever been, but I have no idea when I can identify that.

“We’ll see what opportunities happen. If we were to win one or two more championships that might sway me to consider slowing down sooner rather than later. But I plan on racing for a lot of years. I love sports car racing and would love to do the Daytona 24 hours again. I’d love to get back to my roots and do some off-road trucks again because they are among the most extreme vehicles on the planet.”

Jimmie Johnson is a true racer who is writing his way into history as he chases his seventh NASCAR championship. He’s enjoyed a remarkable career and looks like he will continue to stand as NASCAR’s benchmark for at least a few more years to come. 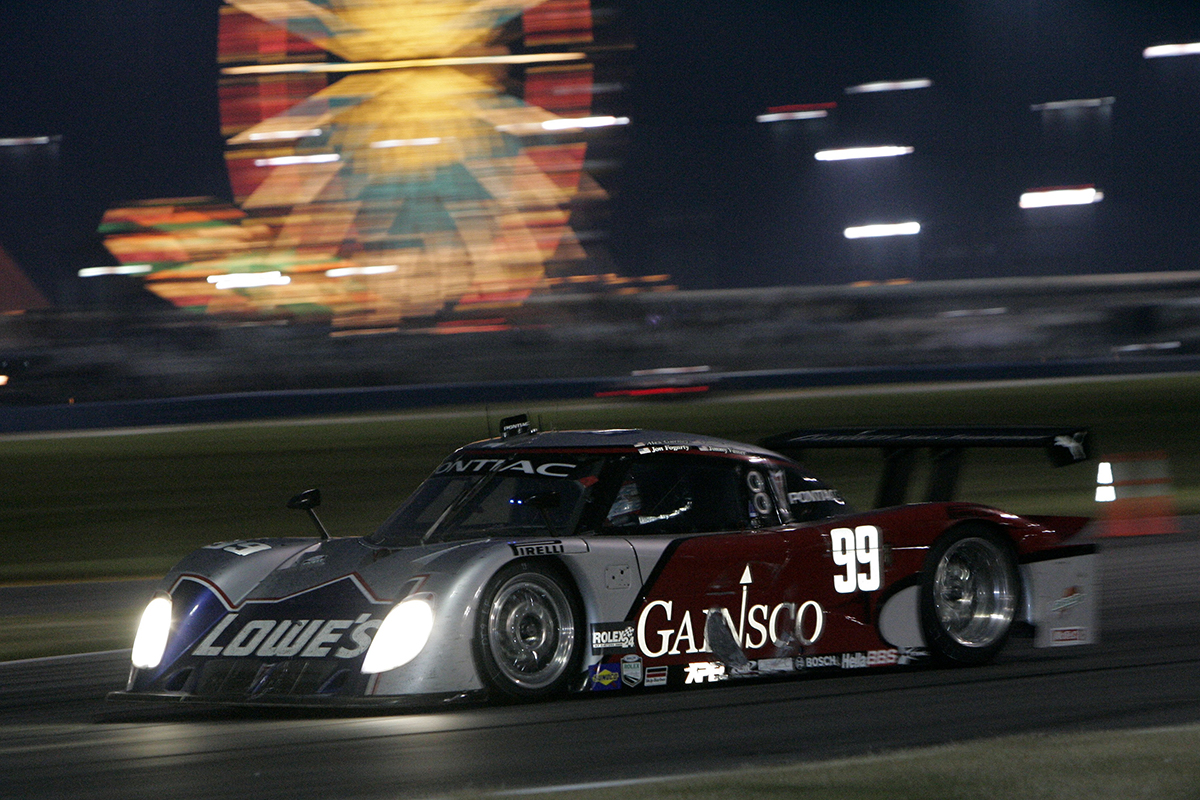 The Pontiac/Riley Johnson shared with Jon Fogarty, Alex Gurney and Jimmy Vasser​ at the 2008 Daytona 24 Hours