They are billed as the toughest endurance races in the world: the Nürburgring 24 Hours for cars, and the Le Mans 24 Hours motorcycle race.

Switching between the two-wheeled and four-wheeled competition, the film concedes that the only thing that the two events have in common is their length.

What unites the drivers and riders are the physical and mental lengths they are prepared to go to in search of the finish line.

Watch the 2+4=24 film below. Directed by Jeremy Hart, it charts the progress of touring car driver Tiago Monteiro and MotoE rider Josh Hook. Both feature as talking heads in addition to being followed through their race weekend.

Monteiro, who scored a podium for Jordan in his single F1 season, describes the Nürburgring slog as “The most challenging, the most difficult race on earth”, before slightly backtracking as he admits that the Le Mans bike race is actually a bit harder.

Just what a knife-edge the motorcyclists race under is emphasised by Hook: “Mentally and physically, it destroys you”. The tiniest mistake can lead to a race-ending crash, leaving the team packing up to the sound of battling bikes — the lengthy preparation for naught. 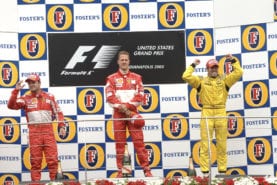 Tiago Monteiro: the only man who cheered at the 2005 US Grand Prix

F1's 2005 US Grand Prix fiasco dented the series' image, angered teams, and left Ferrari's drivers looking sheepish. But there was one man leaping for joy: Tiago Monteiro tells his story.

Just to make things a little more challenging for himself, Hook competes with a still-healing metatarsal break, having to be lifted off his bike by mechanics when he finishes his stint.

Motorcycle legend Wayne Gardner gives his view on the challenge of endurance racing as does GT driver Charlie Martin, who tells us of “the fear factor” of the Nordschleife.

Both Hook and Monteiro are followed off track in between their stints, while on-track action shows hair-raising racing aplenty, as well as the usual comedy prangs that sometimes inhabit endurance racing.

And at the flag… well, all is revealed.