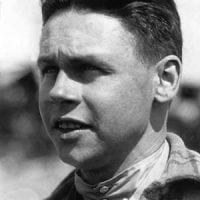 It is unusual for a driver to achieve so much in such a short time and to then retire without injury. Chicago’s Billy Arnold only raced in what is now the IndyCar Series for just three full seasons and won both the Indianapolis 500 and National Championship during 1930. With boyish looks and a “take it to the limit attitude,” he disappeared as fast as he arrived.

His debut in America’s greatest race was in 1928 when he finished seventh with a Boyle Valve Miller. He was also fourth and third that year on the boards of Altoona and Salem respectively as he finished ninth in his rookie Indycar season.

A consistent finisher in four starts the following year (including eighth at Indy in Boyle’s Miller), Arnold was without a drive for the 1930 Indianapolis 500 and he travelled to the Speedway more in hope than expectation. When a recovering Harry Hartz called off his qualifying attempt, Arnold was promoted as his replacement.

Arnold promptly qualified the Summers-Miller in pole position at an average speed of 113.268mph. Lou Meyer led at the start but Arnold stormed to the front after just two laps and was never headed again to win in front of a record 170,000 crowd. Two more victories that year – both from pole position and both at Altoona – clinched the 1930 Indycar title.

After such a successful season, his 1931 Indy 500 could not have been a greater contrast. It started well with Arnold seemingly on pole again only for his time to be disallowed when his brakes failed scrutineering. Even faster a day later (but only 18th on the grid due to Indy’s qualifying rules), Arnold was in a class of his own in the race.

He took the lead after just seven laps and remained unchallenged for almost 400 miles. Arnold had a five lap advantage by three-quarter distance but he collided with a backmarker on the 162nd lap and hit the Turn 4 wall. His wheel flew over the grandstands and into a nearby garden where it hit and killed an 11-year-old boy.

Arnold broke his pelvis in the incident but he returned in 1932, again with a Hartz-entered Miller. Second on the grid, he took the lead after a lap but crashed over the wall when avoiding another car. That Arnold led 410 of the 421 laps he completed at the Brickyard over the last three years is testament to domination seldom seen in this arena.
Apparently under pressure from his new wife, he retired from the sport after his latest accident. Arnold then worked for Chrysler before serving his country with distinction during World War II.

Outgoing and a star when in his twenties, Arnold grew ever-more removed from the sport that had made him famous in later years. He later worked in the building industry in Oklahoma City but died after suffering a brain haemorrhage in 1976.