As we close for press we hear of a few interesting cars for disposal. The Anzaniengine(‘ Lea-Francis which itarry Bowler mentioned in his recent ” Cars I Have Owned ” article is in London and for sale at about £25, some R:50 having been spent On it just before the war, when it was 99 per cent. finished, and has not been run since.

Then there are two F.W.D. Alvis 2-seaters, a spare engine, and spare blacks, valves, supercharger, manifolds, camshafts, gearbox parts, front universals, half shafts, crown wheels and pinions, etc., for same, can be had for £50 the lot. A Lea-Francis, less engine, is offered at £5.

The famous twin o.h.c. Aston-Martin ” Razor 13Iade ” is seeking a new home, a 1903 single-cylinder de Dion has been seen in Shoreham, and someone is willing to exchange a non-spring-frame I,000-c.c. Ark! Square Four solo for a sports car, with cash adjustment 6( her way.

It-will not have escaped notice that by prodigious efforts our magazine has been published earlier this month. To save unnecessary correst-onde n ye may we mention that the date (Arra 1st) is not in any way connected with this event, though possibly some of our critics may consider it most suitable. 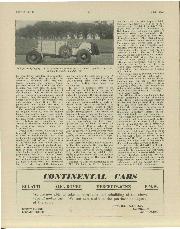 his then future wife located a complete Model 40, which they persuaded the breaker to dismantle with care and, having acquired the complete frame, proceeded to cut Off the front…

B. Bira: Siam's prince of racing

To passers-by at Baron's Court underground station, two days before Christmas 1985, he was just an elderly man, but by his appearance not a local one. That he had seen… 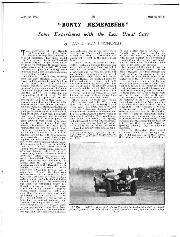 " BUNTY REMEMBERS" Some Experiences with the Less Usual Cars by DAVID SCOTT-MONCRIEFF THE description of the Renault "45 " in an old copy of the Motor, lying in a… 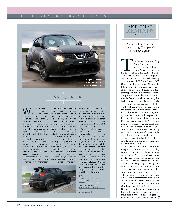 A difference one liffle letter can make. The Nissan Juke is an odd-looking and dynamically very ordinary 'crossover' hatchback. It has been a runaway sales success. A Nissan Juke R…