A WEEK-END WITH THE ALVIS “FIREFLY”

THE increasing stand.ardisation in the design of modern cars has naturally led to similarity in control, so that in the ranks of cheaper cars there is very little to chose between them in this respect. This state of affairs is largely brought about by mass production methods, and does not apply to those cars which are built, not to a price, but to the designer’s ideal. This train of thought passed through the writer’s mind when he first took over an Alvis” Firefly” Sports Saloon for a week-end test recently. His previous mount had been a popular light six, which did its job adequately without revealing a trace of character and without making any demands on its driver—except at high speeds, when concentration was required to remain in a straight line. What a difference in control was needed for the “Firefly,” and with what

correspondingly greater pleasure ! Alvis cars have always been renowned for a rock-like solidity and strength, and this new model is no exception to the rule. Tautness and robust construction are one’s first impressions of the car, and one felt unmistakeably that it was descended from the famous old 12/40 model of ten years ago. For sharp turns at walking pace on full lock, the writer found the steering rather heavy, especially in comparison with the light six he had previously been handling. But You can seldom have it both ways. The effort required at low speed was more than counter-balanced by the inherent steadiness of the Alvis when travelling fast over a rough surface, a circumstance in which the light six would be a “handful.” The steering is high-geared, with pronounced caster-action, so that cornering is at all times safe and controlled. After all, the majority of a ” Firefly’s”

life will be spent in cruising at 50 m.p.h. on main roads, and at this speed the steering is effortless and at the same time Positive. Suspension can make or mar the steering qualities of a car, so that a description of one must inevitably lead to an account of the other. The ” Firefly” holds the road beautifully at all speeds,

and although the shock absorbers were adjusted for fast work, no discomfort was experienced at low speed. Undoubtedly the long wheelbase, 9′ 10 r is partly responsible for this, and indeed the general riding qualities of the car belong to a machine of greater size and horse-power.

It is common knowledge that a car, to be safe at its maximum speed, should be so designed that the chassis can hold the road perfectly at speeds a good deal higher than its actual maximum on the level, thereby providing a margin of safety. In order to test this margin of safety it is our custom, whenever possible, to take test ears to a certain stretch of road, straight and downhill. Here the car is driven at a higher speed than can be hoped for on the level, and a thorough test of the road-holding, and incidentally, the engine of the car under review obtained. The .Alvis ” Firefly ” came through this trial with flying colours. 70, 75, 80 m.p.h. was registered by the speedometer, and at this speed the car held the road like the proverbial leech. As for the engine, we had already demonstrated its readiness to turn over smoothly at 4,700 r.p.m. on third gear, so that we had no qualms about its safety. The speedometer, by the way, is

A 12 h.p. saloon with the dimensions of the Alvis ” Firefly” naturally requires a long stretch of road in order to reach its maximum, and on such a highway we succeeded in reaching a speed of 75 m.p.h., with a full complement of driver and three passengers. On any good main road 70 m.p.h. can be attained, but special conditions are necessary for the extra 5 m.p.h. to be gained. The ‘ Firegy ” cruises without any effort at 50 m.p.h. The engine is flexible at low speeds providing that it is not required to pull too hard, and the ignition control on the steering wheel quadrant enables satisfactory results to be obtained. An owner of a ” Firefly ” will not be of the type of driver who wants to creep about on topgear, and will probably prefer to use the gear-box, as should be done with a car of

its specification. By dropping down to second the car accelerates well even from walking pace, and on this gear a maximum of 38 m.p.h. is possible. Third is on. the low side, which benefits the get away from usual town traffic. 50 m.p.h. was reached in comfort on several occasions, although it is probably better to change up at about 45 m.p.h. for the fastest acceleration.

The gear change requires a little practise in order to become completely at home with it. Precise timing has to be effected for quiet changes, the slightest delay making it impossible to engage the gears. Once the correct pause has been learned, however, no difficulty is presented at all. Unusually, changes down can be made easier at first than upward “gearshifts,” that from top to third being particularly delightful.

The brakes are well up to their work, arid although they require considerable pressure for maximum operation, they can be applied to the exact amount necessary. The foot-pedal has a large surface, which adds to the driver’s sense of security, and indeed the angle of all the pedals has been carefully designed—a point not as common as one would imagine.

The body of the car we tested was a coachbuilt saloon of generous proportions and very pleasing lines. Four wide doors enabled the interior to be reached without any acrobatic contortions, and the driving position was beyond criticism. A large boot at the rear provided plenty of room for luggage, and altogether the car was admirably suited to long distance touring. Our only criticism of the body was that the front doors, being hinged in the middle of the car, allowed a draught to enter the front cockpit, while another breeze seemed to find its way into the rear compartment from the foot-wells and from under the seat. These faults, however, may very well be only found on the actual car tested—and in any case should not be difficult to remedy. The equipment was complete, the Rotax headlamps giving a splendid driving light, and the British Berkshire screen-wiper coping satisfactorily with a blizzard of snow and sleet.

The price asked for the Alvis ” Firefly” saloon is £495, and when one considers the strength of its construction, its lively performance, low tax, and the famous Alvis wearing qualities, the worth of the car can be readily appreciated. 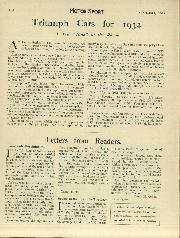 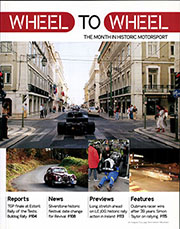 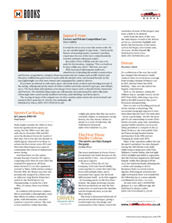 Jaguar E-type Factory and Private Competition Cars Peter Griffiths It would be oh so easy to tar this review with ‘Oh no, not another Jaguar E-type book…’ Surely in the… 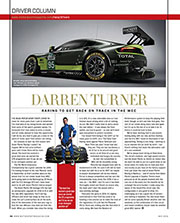 Raring to get back on track in the WEC I’ve read Motor Sport from cover to cover for more years than I care to remember. I’ve read tales of my…

May 2016 Issue
By Darren Turner