Just as in April 1962, the motor racing world is on tenterhooks as a giant who once bestrode the sport lies in a coma in a hospital bed. While we all hope Michael Schumacher makes as full a recovery as Stirling Moss did, at the time of writing that was a long way from certain as he remained in a stable but critical condition following his skiing accident just before New Year. But if there’s one thing we learned during his career, it was never to bet against him; whichever part of the brain activates the will – neuroscientists suggest it’s probably the dorsolateral prefrontal cortex – is incredibly strong in Michael.

How the will is manifest is of course different in each of us, but the way that Michael marshalled it during his career had a few curious side effects. It was as if he delineated his personal and professional self into two boxes, with no overlap. Everything in the professional box was done to maximise his chances of success – from swerving in front of the other guy at the start because the wording of the regulation said you could, to how he conducted himself in the paddock – and there was no apparent link with that and the off-duty Michael who is, by the testimony of those who know him well, a genuinely good guy.

“He made like I wasn’t there, just completely blanked me”

While Michael’s one-time protégé Sebastian Vettel wears his greatness lightly in his manner, Michael’s strict delineation never allowed that. With the result that many who know only his public persona at the track find him just slightly odd – which is a great shame.

I’ve known him only slightly for many years and interviewed him one-on-one a few times, most recently in the back of a limo after he’d announced his (second) retirement. I like him, but do see how he can leave some cold. There was an occasion during his Ferrari years when he suffered a left-rear puncture during practice at Hockenheim and spun into the gravel trap at the entrance to the stadium section. I was standing trackside there and watched as he climbed from the car, signed some autographs for the marshals and then – upon realising he was marooned there for the rest of the session – stood and observed the on-track action. I wandered over after the marshals had dispersed and asked if he’d felt when he’d picked up the puncture, whether he’d hit a kerb perhaps. There were just the two of us, the recovered Ferrari with its flat rear Bridgestone was a few metres away and he made like I wasn’t there, just completely blanked me.

Maybe he didn’t hear over the sound of the engines, I thought, and asked again when there was a gap in the traffic. Same response, this time looking over my shoulder to the empty track. It then dawned on me what the problem was: he had not had the chance to talk with the team or the tyre company about the failure so could not even acknowledge that there had been a tyre problem at all. So to acknowledge my presence was to acknowledge the question, accept the fact that the tyre was indeed punctured and then be obliged to answer. That could be counter-productive, could later cause him problems with Bridgestone, maybe interrupt his weekend in some way later. So his solution was to refuse to acknowledge my presence. Anyone else would either have simply answered or at worst said: “Look, I can’t say anything until I’ve spoken with them. You know how it is.” That awkward link between the person and the competitor caused many people to get him wrong or simply be puzzled by him. 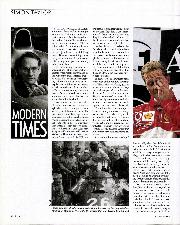 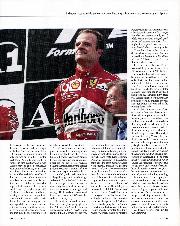 I’ve had a minor deluge of letters and e-mails from readers wanting to know what I thought of Ferrari’s tactics at the end of the Austrian Grand Prix, when Rubens…

“I know what you mean,” said Ross Brawn, with a grin, when I spoke to him about it. “When you know him well and are working with him the whole time, you see that everything balances out as you get a picture of the whole. But he does have some traits that in isolation would make you say: ‘Hello, that’s a bit odd’. But he’s a great guy.”

The power of his will in the intensity of the cockpit allowed no room for how he might be perceived or the legacy he could be leaving with his more questionable moves. The real world only rushed in as he removed his helmet – and he would then often be completely uncomprehending about all the fuss. The most obvious example was the negative crowd reaction he got after Rubens Barrichello had conceded victory to him just short of the finish line at Austria in 2002. He tried to make amends by having Rubens stand on the top step, again displaying a certain lack of emotional intelligence – the deed had already been done and that meaningless sop to the jeering only made it worse.

At Budapest a few races later, with the championship already sealed – the goal attained – Schumacher had no compunction about allowing Barrichello to win, but only an examination of his slow laps around the pitstops and the subsequent leisurely early lap stints made this obvious. With the target achieved, he was trying to be magnanimous and Rubens did not do anything to point out what the reality was: that he had been given a win back that he’d surrendered earlier (though even in Austria, it had never been a race – both were simply circulating, well off their potential).

Rubens publicly made like he’d beaten Michael in Hungary on merit. Within the team, Michael felt he had paid his debt. The world at large didn’t get that story painted for them – because the tale of the arrogant German demanding that his team-mate should always be subservient to his needs was a much better one, accorded better with what the fans wanted to believe. And the reason the fans preferred that story goes back to that awkwardness in linking the off- and on-duty Michael. Some drivers can do this effortlessly, gracefully – Mario Andretti, Moss; others find it more difficult. Michael perhaps found it the most difficult of all.

But he was simply a phenomenon, with a natural talent that was off the scale and a way of working that was calculated to maximise that at all times. Out of the car he devoted perhaps more thought to how he could give himself advantages than any other driver has ever done, cultivating and enriching his relationships with those who could help him. Not in a cynical or exploitative way, but in a way that was going to be to everyone’s advantage. All driven by that incredible will.

Moss talked about will in his biography All But My Life. He had read once about a driver who had been knocked unconscious in an accident, and who though essentially uninjured was then consumed by fire.

Moss made a mental note that if ever he found himself unconscious in a car he would somehow endeavour to get out. Marshals who rushed to his car after his crash at Spa in 1960 reported that though Moss was unconscious, his legs were moving. We don’t really know what happens in that twilight world, whether there is perception of any sort. But if there is, Michael will be directing that will.