Intrigued by cars almost from birth, Simon was still at school when he persuaded a local newspaper editor that he really, really needed to run race reports from Oulton Park, Aintree and elsewhere. He has since followed the sport all over the planet and edited several titles, including Motoring News, Autocourse and this one (August 1991-October 1996).

Going back in time to racing at its finest: On the road, August 2022

Mini Festival Brands Hatch, August 7 The intention had been to commence the month watching one of the highlights of the Veteran Sports-Car Club’s annual itinerary, at Prescott, but regular…

Circuit Dijon-Prenois only held seven GPs and was criticised by some, but still managed to produce some famous moments in F1 history

Herbie Blash will bring credibility back to F1 race direction

On the surface, it might not appear a particularly forward-thinking move to rehire a 73-year-old official five seasons after he stepped away from Formula 1. But the return of Herbie…

Ageing racers never lose their instinct, says Coulthard — but do go for gaps that aren't there

It would be easy to assume Romain Grosjean’s semi-autobiographical new book, written in partnership with his wife Marion, is a slice of commercial opportunism – a chance to cash in…

Tyrrell ‘Shed’ takes in the world

F1 Retro – March 1998 Twenty-five years have now gone by since Ken Tyrrell announced his plucky gang of garagistas was selling up to British American Tobacco. Tyrrell’s eponymous squad was… 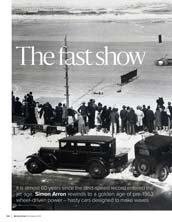 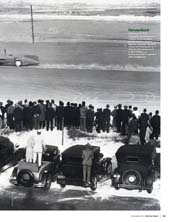 Golden era of the land speed record: before the jet age 

The noble art of chasing land-speed records is approaching the 60th anniversary of a significant crossroads. On August 5, 1963, Craig Breedlove’s jet-powered Spirit of America was clocked at 407.447mph…

They are rarely mentioned in the same breath, but Mallory Park and Formula 1 are by no means strangers. The circuit was a staple on the British Formula 1 Championship…

Back in black: Lotus and Emerson reunited at Brands Hatch

It’s one of motor racing’s most familiar photographic clichés: black livery with gold flourishes, distinctive dark helmet with elegant red swirls, driver’s head cocked to one side as he coaxes…

The fiery trail blazed by Hesketh Racing: from F3 to F1

Good grief. I haven’t sat in this since I climbed out at Brands Hatch in 1972, having just buried it in the bank…” Half a century on, ‘Bubbles’ Horsley (it…

1969 through a lens: a spectacular year for racing photography

Fate has a reputation for moving in mysterious ways, but can sometimes be unexpectedly productive. When watchmaker and motor sport aficionado Richard Mille visited the DPPI archive to seek bygone…

It's quite common for sports stars to bolt to a tax haven as soon as fame or fortune strike, but convention has seldom been the Mark Blundell way. “I did…

Finding your way in to historic racing

Combining work with a personal passion is a goal for many – and achieved by a relative few. Harvey Stanley is one of that small number. By day he works…

Over more than 120 years of motor racing, many drivers have served long, rewarding careers. Few, though, have spent 19 consecutive seasons with the same front-running team. As Oliver Gavin… 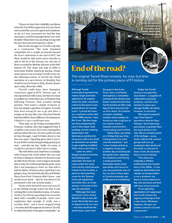 Although Tyrrell eventually expanded into newer, larger premises adjacent to its original shed, the latter remained critical to the team’s race preparations for several years. “I joined the team as…

More than 20 years have passed since its name last appeared on a grand prix entry list – and almost 40 since its most recent victory. For many, the Tyrrell…

When you reach a certain age it is traditional to carry two pairs of spectacles, one for reading and the other with a powerful, roseate tint. Trouble is, the view…