In a world where racing simulation games aren’t rare, you have to do something different to stand out. Assetto Corsa Competizione does this by going against the grain. Whereas titles such as Gran Turismo, Forza Motorsport and Project Cars thrive on boasts of more and more cars, tracks and variety of gameplay, Assetto Corsa’s developer, KUNOS Simulazioni, has gone the other way with its second console release, trimming back content in search of perfection in its field.

For Assetto Corsa Competizione, it’s a little different, and the clue is in the title. KUNOS has struck a deal with the SRO Motorsports Group to make it the official game of the GT Challenge – nee, the Blancpain GT Series. Therefore, you are offered just a single class of machines: GT3. The game has finally been rolled out across consoles as a way of spreading the accessibility of both the Assetto Corsa brand, and GT3 racing in general.

It may seem a risky move. Outside of the official Formula 1 and World Rally Championship series, very few developers willingly risk investing in a title pared back to a single championship. And it’s not like GT racing has the widespread following grand prix racing has, either.

Therefore, in order to truly succeed, Assetto Corsa Competizione really does need to raise the bar in terms of experience to avoid a short shelf life and being swiftly consigned to the bargain bin. 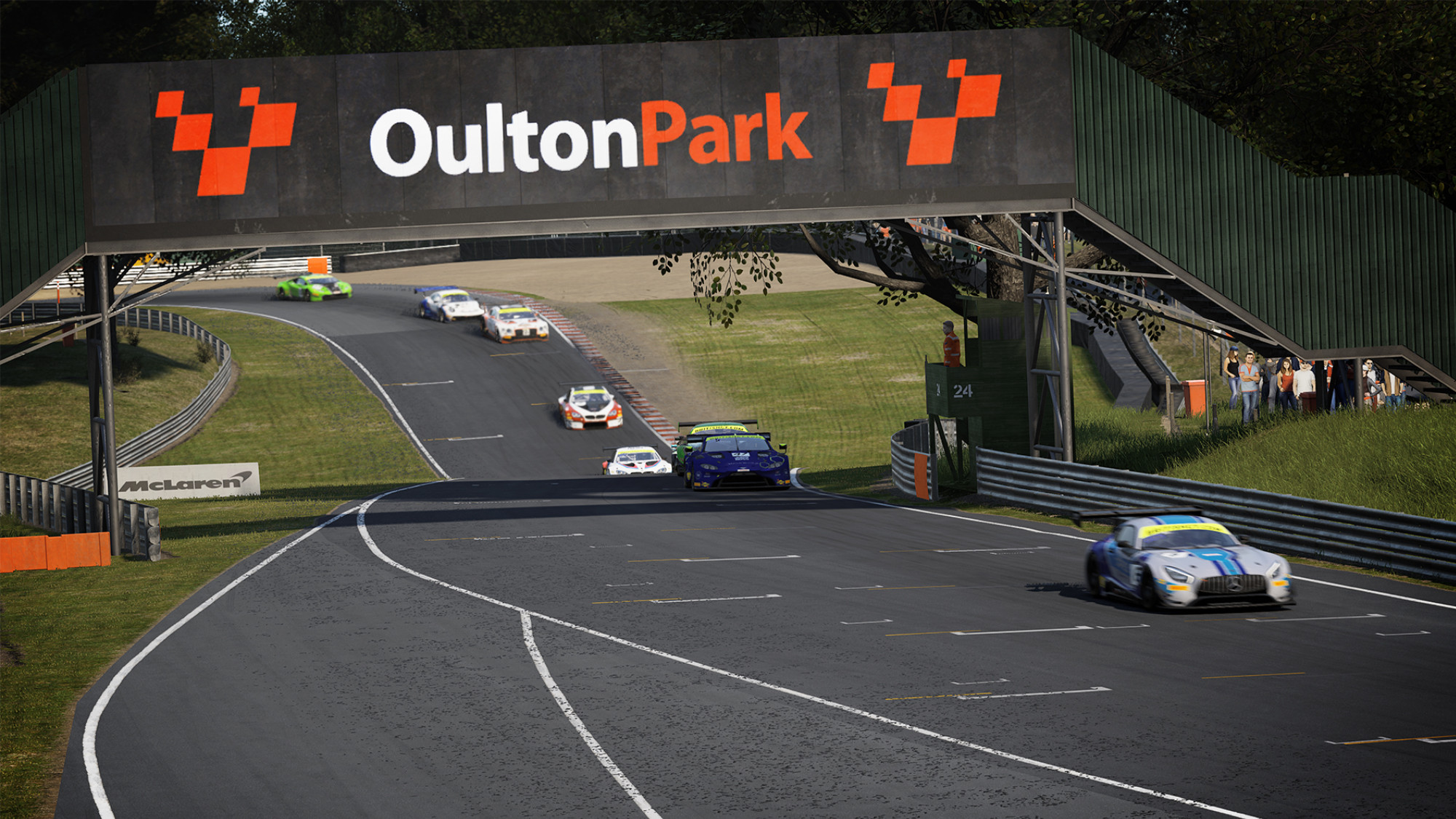 The latest downloadable content pack for Assetto Corsa Competizione has finally dropped on PC and will arrive on consoles later this year. The British GT Racing Pack adds plenty of content to get stuck into for UK racing fans.

Mixed class racing is now available around three iconic British racing venues on PC and will be arriving on PlayStation and Xbox later this Spring.

Alongside the Intercontinental GT, Base GT4 and 2020 World Challenge GT season DLC’s, there is no shortage of cars and circuits to dive into for those looking to get a taste of GT sim racing.

First, let’s deal with what the game does well. Very well, as it turns out.

For a comparatively small developer, KUNOS has always punched well above its weight in the physics of its games. One of the reasons the main, broader Assetto Corsa game – which has been around since 2013 on PC – gained such a following was due to the superb true-to-life feel it gave drivers with the right equipment.

Car models behave almost exactly as they would in real life. The cars here feel like the weighty, powerful, raucous beasts that they are. Rolling out of the pit lane and lighting up the rear tyres to the roar of a big and brash engine in this is as exciting as it gets. It makes you feel something, which is always a real plus for any game claiming to offer an immersive simulation experience.

The graphics also look great. Outside of a professional-grade gaming PC – which cost thousands – ACC does a lot of things right. It may not be as polished as bigger-name titles, but crowds swell as you race by, marshals wave flags as they should, and every inch of asphalt is accurately represented here. 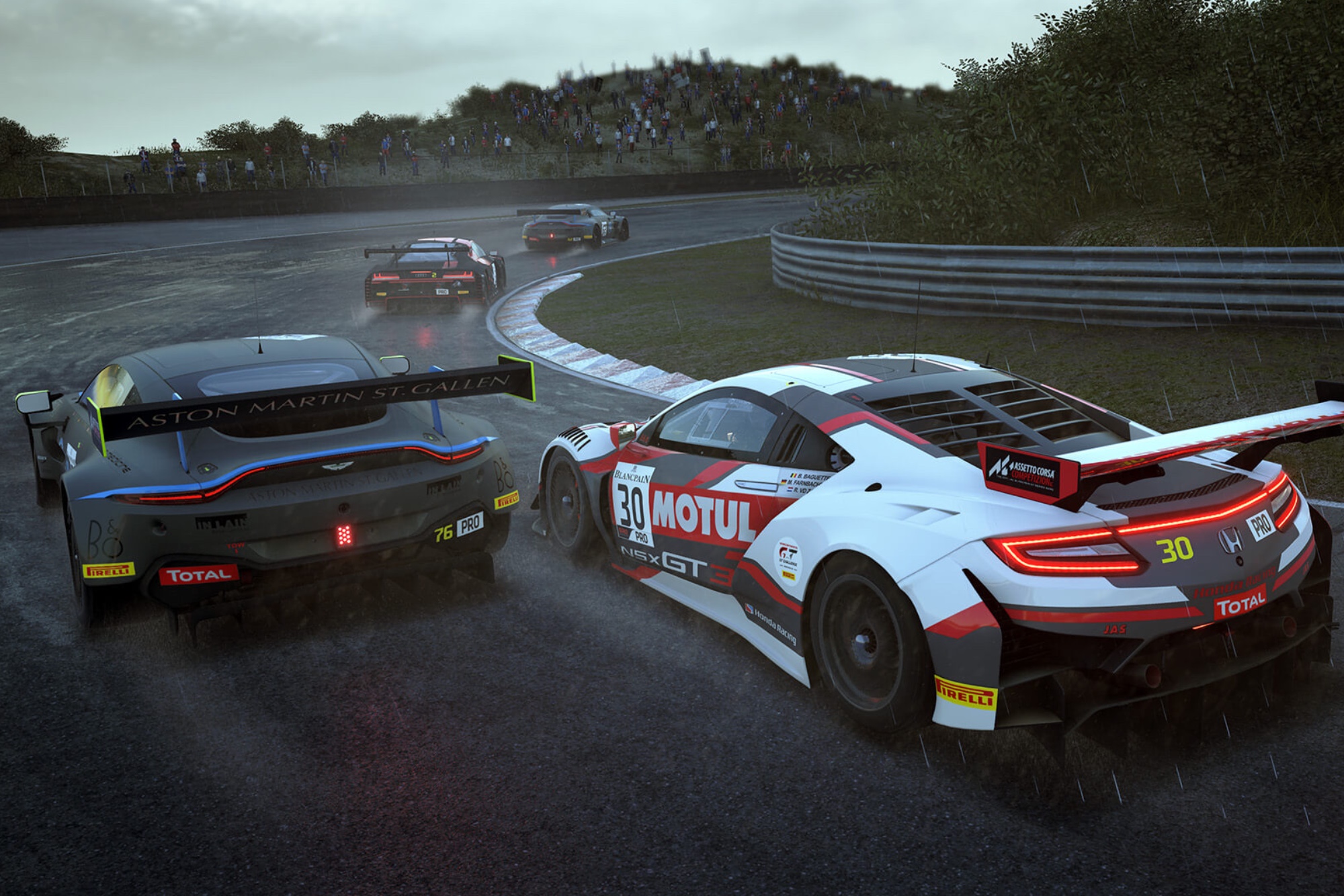 The console release is a strong sim, but does lack in a few areas

The circuits have all been laser-scanned to perfection, and you get 11 as standard, covering each of the real-world venues SRO’s GT Challenge runs at. There are more tracks coming, with an extra four – including the punishing Bathurst Mount Panorama layout, Kyalami, Suzuka and Laguna Seca – available as downloadable content from launch. There’s also a British GT package in the works, which will bring three other UK venues to the mix – likely Snetterton, Oulton Park and Donington Park – but it’ll be paid-for content on top and sadly not included from launch to flesh out the offering a little.

All of the GT Challenge or Blancpain entries since 2018 are included, meaning you get 24 different GT3 models from 14 different manufacturers, and can choose from the range of real-world team liveries for them. They look beautiful, and they sound superb. The audio in this game is perhaps the best I’ve experienced, with unique engine and ancillary sounds for each model, which are truly stirring.

So far so good. But you can tell this a scaled-down port of a PC game in a few areas, which add up to prevent ACC from being the complete package as it stands.

Firstly, the graphics are crisp enough, but they max out at 30 frames per second, meaning if you switch immediately to this game from something like Project Cars 2, like I did, there is a noticeable difference in running speed. Race animations can sometimes be jerky as a result. It’s not ideal, but you do get used to the slower rate and adjust with time.

Multiple users have reported early compatibility issues with their steering wheels, having to manually set up the controls each time. And ACC is a game that you really should play with a wheel. I made a point of playing with a standard Xbox One controller to see what the handling was like for a casual player. The good news here is that you can play with a standard controller, but the handling is just that bit off. 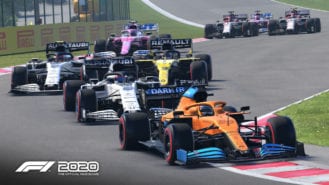 Cars become quite twitchy, and the lack of force feedback means they lose much of the sensation that the physics model has created so well. It becomes hard to identify a slide, or tell when brakes are locking, or even distinguish between a low kerb and a sausage one at times. Feedback development is also an issue when using a wheel, but it’s not as bad and is translated better, but nowhere near the levels of something like PC2.

There are other things that ruin the immersion also, such as the terrible animation of your driver’s virtual arms, which appear to fling the steering wheel left and right erratically with the slightest input. It’s distracting to the point that you’ll likely never use the driver-eye view again after trying it once. Fortunately, there are many other camera options.

It’s likely that most of these are compromises made by porting to a less powerful processing tool in either the PS4 or Xbox One, either that or a clear sign of rushed development.

Even though many will buy this game knowing full well it’s a one-championship only title, the lack of content is also quickly apparent.

For one example, at launch there are no private online lobbies, meaning users cannot organise private online races for leagues or clubs, which is surely the entire point of a game like this? KUNOS and publisher 505 Games is working to rectify this and add private lobbies in soon, but they should have been there for launch.

You can play single races, both solo or online, do a full championship season, or start a career, which is essentially the same but with a few skill test sessions in a Lamborghini Super Trofeo beforehand before you’re flung into the full GT Challenge. It would have been nice to have some sort of story in the career mode, such as a warm-up season in the Trofeo to earn your stripes, or some form of contract negotiation, but instead it all just feels like a tagged-on afterthought. There’s also no livery creator, so you’re stuck with a largely plain black car. Another missed opportunity.

While the GT3 cars are hugely impressive themselves, the lack of wider variety is troubling for longevity. The developers know this and are already extending the license with SRO to bring in both GT4 cars and some variants from British GT also. Sadly, both will be additional paid-for downloadable content scheduled from this winter and into next year. 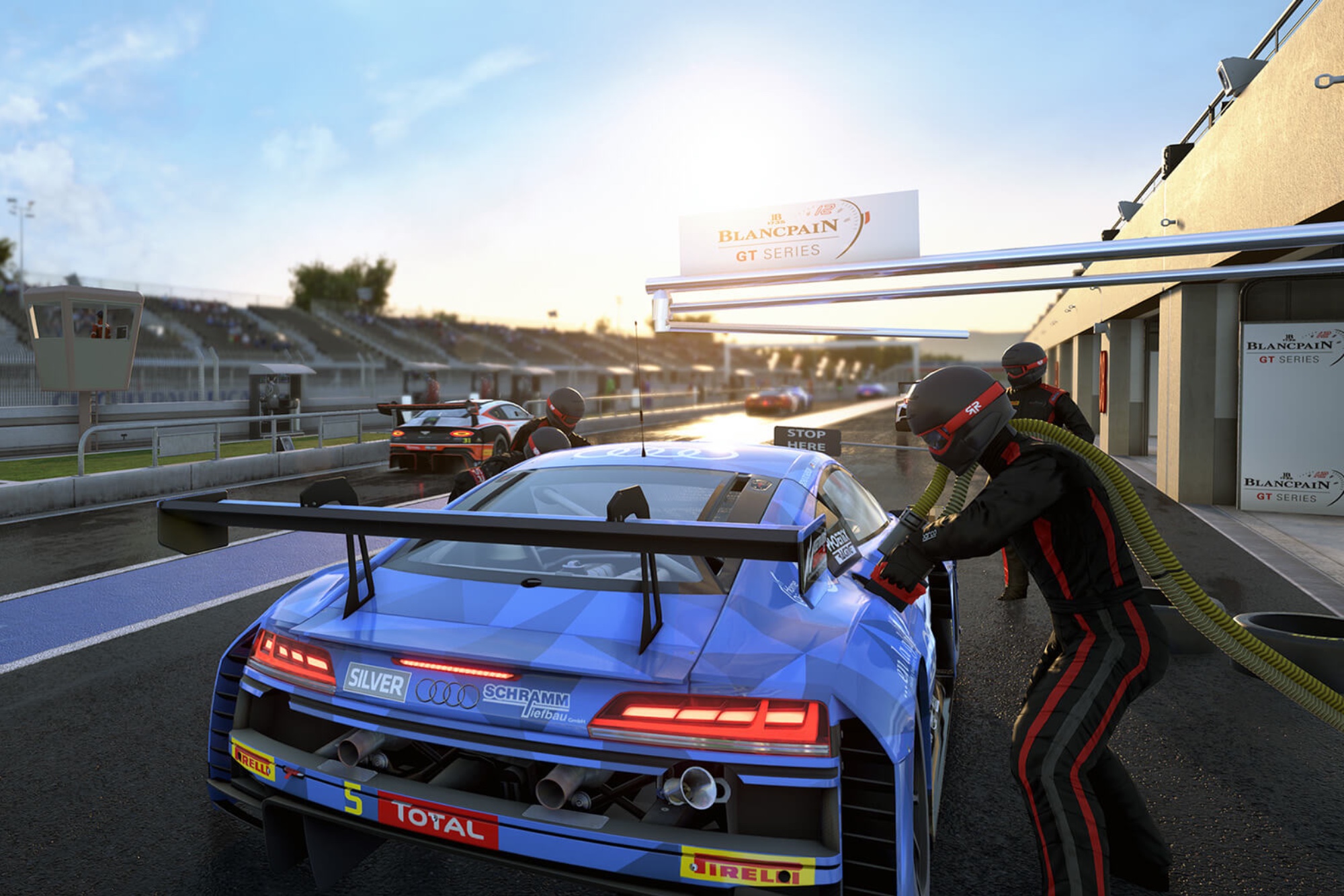 When you do get racing though, there’s a lot to enjoy. With a wheel correctly set up, ACC’s handling model is class-leading, and its AI is competitive and aggressive without ever coming across as brainless. There are also real-time incidents. Rivals can spin off on their own, or get into incident. You also have a spotter on the radio to help notify you when cars are close or of any changes to the condition of your machine. It can be tough to hear him though, with so much glorious engine noise drowning him out. And there’s no way we’re turning that down.

Damage feels accurate, even if at times it may not look it, and some of the animations are great, such as pitting and watching your crew go to work changing all four tyres. Some, however, are less interesting, like the way the same crew stands idly beside your car while a repair timer counts down however many minutes to rectify the damage you’ve inflicted. There’s also no option to fast forward to the end of any given session, which is a tad irritating.

There’s the usual huge range of setup options that most will either need a degree to understand or to spend hours analysing the impact of each small tweak, but some of the pit menus behave strangely, or are broken entirely, as asking your team for a strategic change on the fly is rather difficult.

Overall, Assetto Corsa Competizione is a mixed bag. On one hand it’s a superbly rounded, hardcore racing simulator with a fantastic real-world license and excellently accurate car models. On the other, it’s rough around the edges in many areas, feels a bit too stripped back and should really have hit the shelves in a more complete condition than it is now.

We will have to wait and see if the coming developments can allow this title to live up to its true potential. 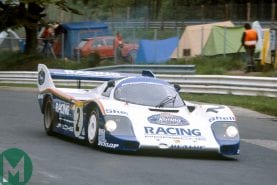 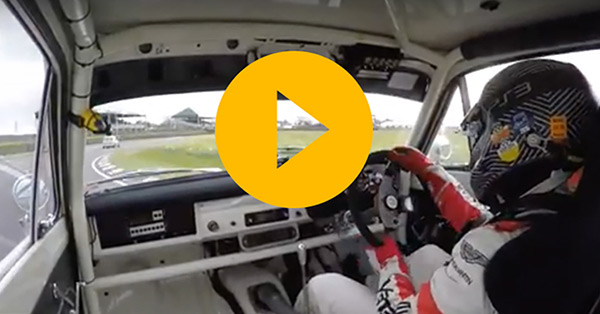 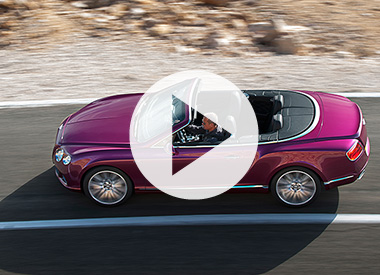 Bentley is showing its fastest-ever open car at the Detroit motor show. The Continental GTC Speed is powered by a 616bhp version of its evergreen 6-litre W12 motor, enough says… 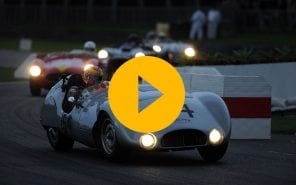