You’re reading this in place of what would normally be the Australian Grand Prix race analysis, but turns out there wasn’t much track action in Melbourne. For one reason or another…

What over half-a-million fans watched instead was an online race, The All Star Esports Battle. That’s right, half-a-million people watched a handful of real world racers – such as Max Verstappen, Indy 500 winners Juan Pablo Montoya and Simon Pagenaud, Neel Jani, Felix Rosenqvist and Antonio Felix da Costa – slog it out from across the globe with professional sim racers. Not only was that 90 per cent more than any other esports racing event ever held, it garnered more viewers than many pay-to-view channels get for an actual Grand Prix! In the words of David Crosby, a singer probably unfamiliar with the esports generation, ‘There’s something happening here. What it is ain’t exactly clear.’

In the post coronavirus world, racing has switched like a smart virus from real to simulated. Not to any preordained plan, but just organically.

The event simulated the Nürburgring (modern version) in F1 cars over a series of heats and finals and was won by professional sim racer Jernej Simoncic, from Slovenia. He’s a multiple champion in the discipline. 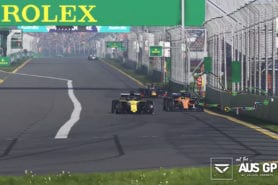 Esport races, featuring F1 drivers and gamers recorded more than a million views over the weekend, as fans watched virtual racing after the cancellation of the Australian Grand Prix. Viewing…

There is enough commercial sponsorship to form prize money funds for the top events, which the elite sim racers can make a living from. They are contracted to teams who in turn find commercial backers (real money, not simulated!) and in some cases even pay them retainers. From the driver’s perspective, sitting in an actual racing seat, with actual pedals and controls, the in-car graphics on the screen reflect the input of both them and the other players around them. The combined inputs are converted into a viewers’ perspective of the race.

Ferrari and McLaren both have Esports teams. Ferrari made a victorious debut in the discipline last year, backing the FDA Hublot team, for which 17-year-old David Tonizza won the F1 Esports Series after a sequence of races around simulations of Suzuka, Austin and Interlagos. McLaren’s ‘Shadow Project’ has been running since 2017.

In yesterday’s race Verstappen won his heat from pole but qualified only ninth for the final and was caught up in a first corner incident that restricted him to 11th at the end. Montoya ‘got involved in someone else’s shunt’ in his heat and didn’t make the final. Da Costa made the final and was fighting for 10th when he was taken out. Rosenqvist was the highest-placed of the actual racing drivers, finishing the final seventh.

The event was hurriedly pulled together precisely because of the widespread cancellation of real world events (Melbourne F1, St Petersburg IndyCar, several Formula E races, NASCAR) as the coronavirus does its worst. The idea was to bring together real world drivers kicking their heels with the Esports people – and presumably to capitalise on the unquenched hunger for fans denied the real races.

So the real world and the simulated world were brought another step closer together. There are many real world racers who already regularly take part in a wide variety of championships: Verstappen and Lando Norris won the simulated Spa 24 Hours last year, despite a late drama with a broken pedal in the driver’s bedroom! But this was something perhaps more significant.

For those of us having trouble getting our heads around electric racing cars, what about no actual racing cars? Just computer screens of them. With hundreds of thousands watching on just as thrilled as at a real race. For the moment at least they are being raced by real humans. But what about an Artificial Intelligence version of a human, programmed to be the ultimate sim racer? Bet it could beat Jernej Simoncic… Fantasy? What would we have said about a pretend race generating half a million viewers? Just last week. What a time to be alive…