“A brighter scene would be hard to imagine; sunshine, dresses, sumptuous cars, grass, trees, advertisements, and lastly the little green and blue projectiles themselves, such is the picture retained in the mind of this great event.”

These are the opening words of Motor Sport’s report from the very first British Grand Prix, held 95 years ago this Saturday on August 7 1926 at Brooklands, on a swelteringly hot day – much like that which baked 140,000 fans at Silverstone a few weeks back. Has the British GP really changed that much? At its core and from a point of view of anticipation, public excitement and a sense of occasion, perhaps not.

The grand prix Motor Sport heralded in its September 1926 issue as ‘The first Great International Race held at Brooklands’, and officially named the Grand Prix of the Royal Automobile Club, will be celebrated this Saturday as Brooklands marks that 95th anniversary  – admittedly not the most catchy number, but who cares? – with an event the museum has dubbed ‘Brooklands Relived’. A line-up of grand prix cars through the decades is promised, while a ‘Race Starts’ display on the Finishing Straight will feature cars and motorcycles blasting up on to the Members’ Banking, with ascents of the 1 in 4 Test Hill also on the cards. Little excuse is needed for a visit to the remnants of the glorious old Surrey speed-bowl, but if you need one here it is. The occasion also offers a chance to check out a new exhibition called ‘Driven by Design’ which has been put together in collaboration with McLaren Automotive, featuring among real cars a life-size McLaren 720S made from Lego. How many pages did that instruction booklet stretch to?

Silverstone’s vital role in establishing Britain as a central hub of European motor sport post-war from 1948 is regularly acknowledged, just as it should be. But we must never forget the original ‘home of British motor sport’ and the roots of the British Racing Drivers’ Club. Yet even by the mid-1920s Brooklands, opened way back in 1907, was beginning to creak. Even then it was increasingly considered archaic, especially in contrast to emerging European venues such as Monza (built in 1922) and the new breed of fast road courses such as Spa-Francorchamps (first grand prix held in 1925) and the Nürburgring (completed in 1927). In hindsight, the 1926 British GP can be translated as concerted, if ultimately futile, attempt to reignite Brooklands’ prominence on the European scene.

The race counted as a round of the original World Manufacturers’ Championship, established in 1925 and which petered out before the end of the decade, attracting an entry probably described as respectable at best – even if the works Bugattis that would claim the 1926 title snubbed the trip across the Channel. Three Talbots in nationalistic green faced a trio of French Delages, Malcolm Campbell’s Bugatti (chosen over his Talbot which also appeared on the entry), George Eyston’s Aston Martin – there’s a hazy link to the 2021 British GP grid – and Frank Halford’s Aston-based Halford Special. Nine cars.

For the layout, the RAC chose to eschew the complete Outer Circuit oval, choosing a teardrop track that ignored the Fork and most of the Members’ Banking in favour of a straight blast off the Byfleet Banking on to the Finishing Straight. To slow the cars, a pair of sandbank chicanes were added, with drivers threading through the right-hand span of a footbridge added for the occasion between the chicanes, before they swept up on to the end of Members for the run along the Railway Straight.

The occasion certainly caught the imagination of the public. “One was impressed by the resemblance to a horse-racing meeting, even to the parade of cars burbling gently out to the distant starting line from the paddock, to the delight of the huge crowd, many of whom did not again have an opportunity of examining the vehicles at such close range,” reads Motor Sport’s breathless report. “The antics of the mechanics when climbing in to accompany the drivers to the start were most amusing, some of them only just retaining their precarious seats as the drivers ‘trod on the gas’.”

The race itself was a four-hour slog of attrition, a gruelling marathon becoming of its grand epreuve title, as heat became a running theme – especially for the poor feet of the Delage drivers who suffered as they had done elsewhere with burns from white-hot exhausts. For anyone visiting Brooklands this Saturday, listen out for the following echoes, as captured by Motor Sport on the day. 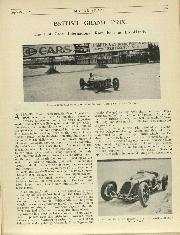 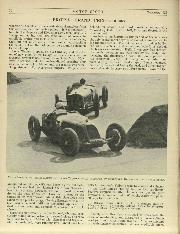 Great International Race held at Brooklands A brighter scene than Brooklands on August 7th, 1926, would be hard to imagine; sunshine, dresses, sumptuous cars, grass, trees, advertisements, and lastly the…

“Henry Segrave’s Talbot exhaust pipe belched wicked yellow flames in the most ominous manner without apparently affecting his speed; Robert Sénéchal appeared to delight in violent skidding on all the corners, whereas all the other drivers restrained themselves from this amusing and destructive policy; it was interesting to note that Segrave and Albert Divo shot away from Robert Benoist’s Delage on leaving the last sandbank, but owing to unreliable brakes and lack of faith in their front axles, they cut out much earlier than Benoist, approaching the bends, so that the Delage lost no ground to them on the whole lap.”

No Lewis Hamilton/Max Verstappen-style shenanigans, of course – but the drivers still had their moments. “The crowd now settled down to watch the extraordinary skids performed by Robert Sénéchal, who seems to delight in this method of cornering,” Motor Sport tells us. “One of the most exciting incidents of the race occurred at the second series of bends: Sénéchal was being closely followed by Divo, who was usually most unspectacular; on the right-hand turn Sénéchal skidded broadside, nearly stopping in front of Divo; in perfect time Divo executed an exactly similar skid, checking his car when it was parallel to the Delage; both cars then proceeded to turn left on to the main track, where the same thing took place again, except that Divo slipped past Sénéchal on the inside and stole a useful lead.

“Just before 90 laps Benoist came in to try and rectify various troubles, and [Louis] Wagner took the lead on Sénéchal’s Delage. Benoist’s car was on fire, and spent some time at the pits, eventually restarting in the hands of André Dubonnet, an amateur, who drove in his ‘gent’s natty suitings’ and hatless!” In blue lounge suit, Dubonnet had no experience of the layout but gamely picked up the challenge of subbing for future WWII resistance hero Benoist. Such were the casual-in-attitude, formal-in-attire heroics of pioneering motor sport.

“Wagner was soon in trouble with his feet, and stopped every few laps to bathe them, but managed to retain an ever decreasing lead,” Motor Sport continues. “Divo in the meantime stopped once more, and after many fruitless attempts to restart [his Talbot] eventually gave up, thus eliminating the last British hope. Excitement rose to fever pitch during the last 15 laps, with Campbell gradually overhauling the crippled and flaming Delage driven by Dubonnet, who was evidently suffering greatly, tongues of flame belching from the bonnet. Both these cars, however, were catching up Wagner’s Delage, which kept on stopping on account of the driver’s feet. On the 102nd lap the Bugatti passed the Delage, thus securing second place, which it maintained to the end. Wagner was too far ahead to be caught, and eventually won at 71.61mph, a remarkably good speed considering the number of stops.”

Thus were British hopes vanquished by the French that day at Brooklands, although Segrave – whose Talbot dropped out plagued by engine and brake problems – claimed the Stanley Cup for fastest lap, at 85.99mph.

For Louis Delage, victory didn’t assuage his frustrations over his cars’ heat troubles that left mechanics wrapping asbestos around exhausts to stop them burning through bodywork and soles of feet. He chose not to enter the final round of the World Championship at Monza in September as his engineers turned the 15S8 engine through 180-degrees, moving the exhaust pipes away from the driver. The redesign triggered a dominant 1927 for Delage which claimed the final world title to be awarded before the ‘reboot’ in 1950. There was no drivers’ title back then, although that didn’t stop the French press dubbing their darling Benoist ‘world champion’ in a year he was also awarded a Chevalier of the Legion d’Honneur. Scenes at Brooklands a year earlier contributed to his enduring legend.

Wagner, Sénéchal, Dubbonet, Benoist, Campbell, Segrave… Distant motor racing figures who in some sense seem familiar, in another as if they from another world. But head down to Brooklands on Saturday and listen closely: their echoes still linger.