We are going to take a dive here into statistics regarding how representative might the Mercedes performance at Bahrain last weekend be for the rest of the season.

Yes, it won the race. But it did so as the underdog for once. To win required a strategy advantage against a faster car and a perfectly judged drive from Lewis Hamilton. Mercedes was afterwards quite clear about where it was losing time to Red Bull: the biggest time loss was into the combined braking and cornering approach of the turn 9-10 combination, a downhill kink braking into a hairpin. The next biggest loss – and it was a significant one – was the Turn Five-Six combination, a high-speed left kink bleeding into a decreasing speed right. Pretty much everywhere else the two cars were very evenly matched. What the two areas of time loss have in common is their combination of high-speed and inter-connected nature. Compared to the Red Bull, the Mercedes W12 was reluctant to change direction once it had been loaded up. In the pure high-speed corners where the car gets loaded up only once and then runs through the turn – turns 7, 11, 12-13, 14-15 – there was little or no difference. Suggesting the shortfall is not simply raw, high-speed downforce, but a combination of that with a balance change. 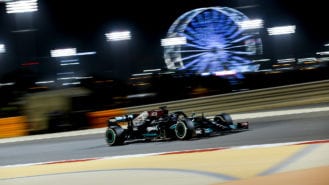 How Mercedes sneaked past Red Bull with bold strategy in Bahrain

The first instalment of what could be the battle of the ages was won in sensational style by Lewis Hamilton and Mercedes. Between them, they took the ball from the…

In the hybrid era, there has been something in the Mercedes’ DNA – maybe its low-rake aerodynamic philosophy – which doesn’t sit very well with the demands of the Sakhir circuit. It’s an extreme example of a rear-limited track whereby the need to minimise the heat degradation of the rear tyres mean that a car’s rear end grip is at a particular premium. So the cars will all be given an artificial understeer bias in their set up. In this way the rear grip of any individual car will determine its overall grip level; the more rear grip it naturally has, the higher a speed a rear tyre-protecting understeer balance can be maintained.

A slight high-speed understeer balance need not be too much of a lap time drain – or any at all. But such a balance will hurt when the car is already loaded up but is then asked to do something else while still in the corner: either begin braking or begin turning in another direction. In testing, it was a wayward rear end that was making the Merc difficult but for the race weekend the solution to that problem brought with it more understeer.

Which may mean we started the season off with a picture-skewing track. Yes, the Red Bull-Honda was definitely quicker there, and by a very handy margin of just under 0.4sec in qualifying. But even if we froze the specifications of the car right now and had no further development parts, history suggests we’ll see a more competitive Mercedes at pretty much any other track.

Here’s how Mercedes has performed at Bahrain relative to its seasonal average of all the tracks since the beginning of the hybrid era. The percentage numbers show the difference to the next-fastest car in each case. 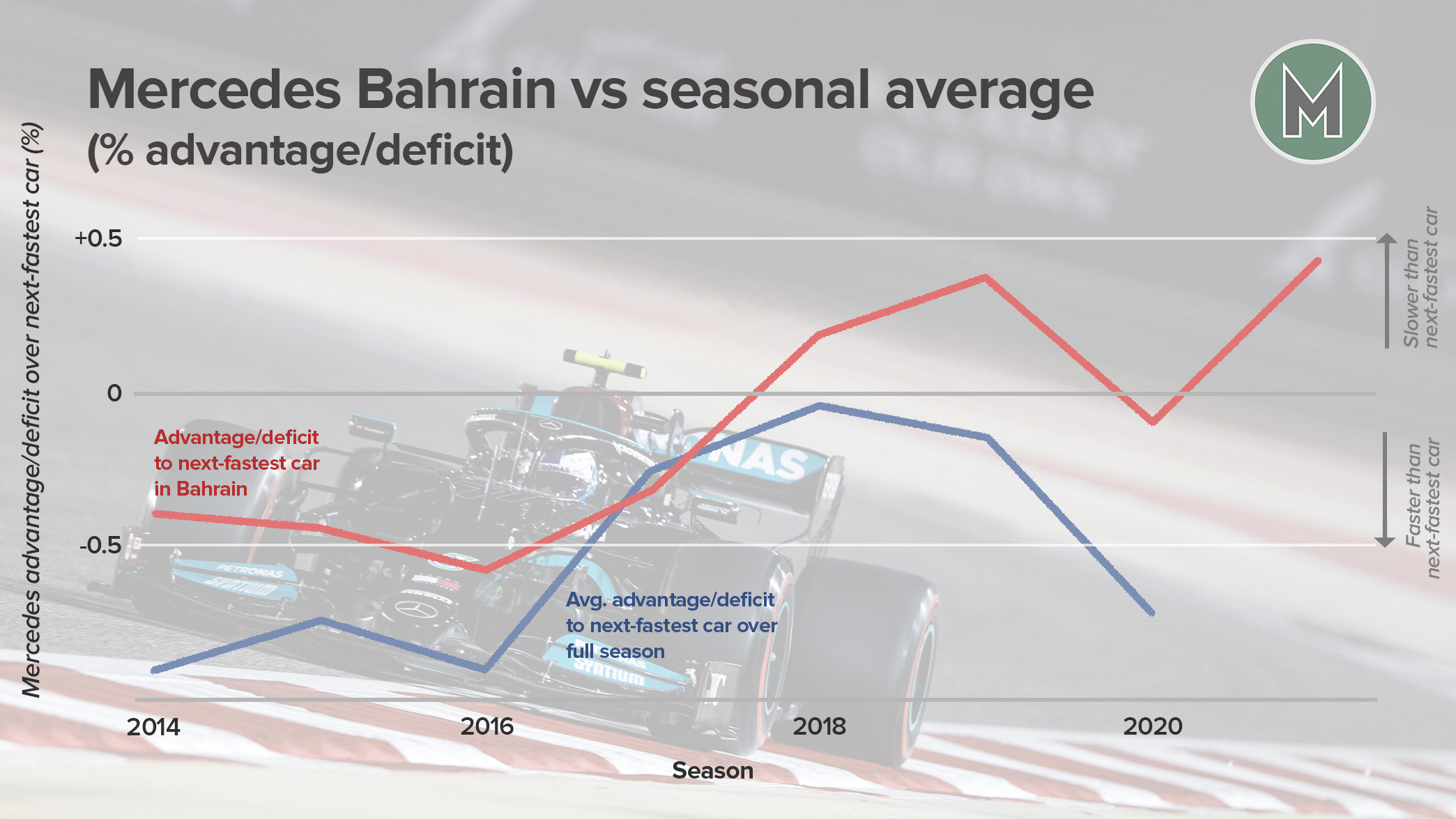 Red indicates where Mercedes has qualified slower than a rival.

As can be seen, with the exception of 2017 Mercedes’s Bahrain performances have always been well below their own seasonal averages for all the other tracks. How do these percentages translate into lap time? The seasonal average pole time for all the different length tracks is usually around 1min 20sec.  So typically, relative to the next-fastest car, Mercedes has been around 0.28sec slower at Bahrain than its seasonal average. Which is a big chunk in competitive terms.

It’s true that the deficit (to Red Bull) last weekend was bigger than has ever been seen by Mercedes at Bahrain in the hybrid era. It’s also true that it was by a margin that was bigger than the historical difference between this track and the rest. But we would expect a much more competitive Mercedes in forthcoming races, something that should allow Hamilton to race Verstappen on equal performance terms than was the case in Bahrain.