In September Scotland will decide whether it wants to split from Great Britain, after three centuries together. Two months later the Catalan people will vote in a referendum to decide whether Catalunya will split from Spain, also after 300 years together, following the conquest of the region by the Bourbon kings. 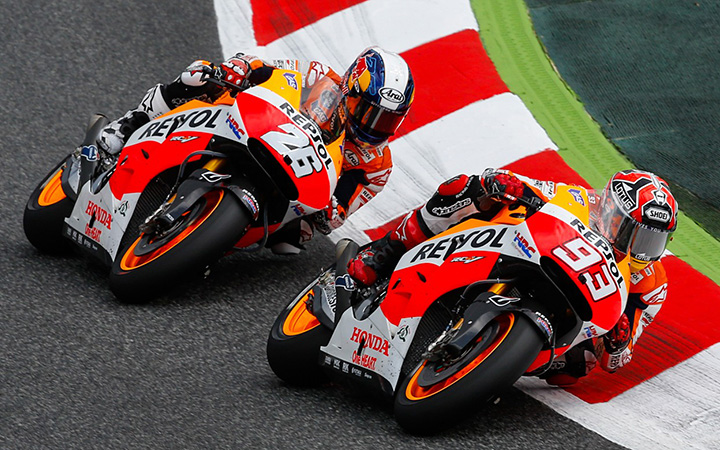 This is a huge political issue, much bigger than anything to do with motorcycling, but if Catalunya does gain the independence it craves it will become the greatest bike racing nation on earth, even greater than Spain.

All three current Word Champions – Marc Márquez, Pol Espargaró and Maverick Viñales – are Catalans. On Sunday all three races were won by Catalans – Márquez the elder and the younger and Tito Rabat. And each time the Spanish national anthem played as the winners stood atop the podium the grandstand crowd loudly booed and whistled its disapproval. They want to listen to a Catalan national anthem, not Spain’s Marcha Real. 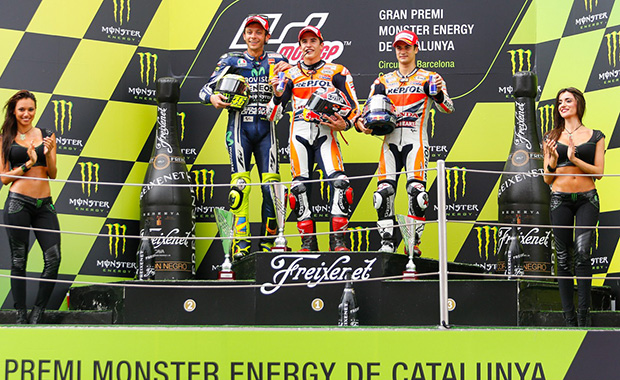 Catalunya and motorcycling go together like fish and chips in Britain. “Bikes are in the character of the people in and around Barcelona,” top Spanish bike journalist Juan Pedro de la Torre told me. “It’s not quite the same in Madrid.”

Pol Espargaró, one of four Catalans in the top seven in the current MotoGP points standings, was born and bred in Granollers, just three miles from the Catalunya track, which hosted its first GP in May 1992, 11 months after he was born. Ever since he was a toddler he can remember hearing bikes warming up for the Grand Prix. Like most Catalan riders, Espargaró usually does his post-race interviews in two languages: Spanish and Catalan, because the locals don’t want to hear their riders speaking in a foreign tongue.

The question, of course, is why are Catalans so damn good at riding motorcycles? To answer that question, just like any other, you need to look at history. 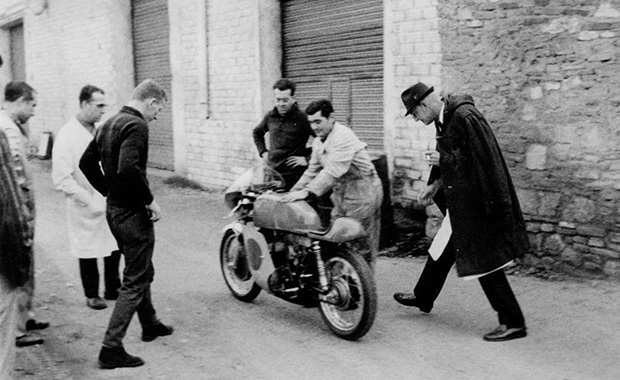 Catalunya is the home of Spanish motorcycling because it was the home of the Spanish motorcycle industry that boomed for several decades after the Second World War, thanks to General Franco’s anti-import policies. Bultaco, Derbi, Montesa, Ossa and MotoTrans (who built Ducatis under licence to sidestep heavy import duties) were all based in and around Barcelona.

Ah, but you say, Spain’s first world champion Ángel Nieto came from Madrid. Yes, he did, but when he was a thrusting teenager he met Bultaco founder Paco Bultó during a race meet outside the Spanish capital. “What must I do to be a champion?” he asked. “Come to Barcelona,” said Bultó. So Nieto did. Bultó’s contribution to Catalunya’s motorcycling brilliance is now commemorated with a fine sculpture at the entrance to the Catalunya circuit.

Nieto won the 1969 50cc title for Derbi and won another 12 world titles over the next decade or so, always in the small classes because the local industry focused on small-capacity runabouts for the everyday citizen. And although he won more than half his 13 titles on Spanish (Catalan?) motorcycles, if there was no competitive local machinery available, the go-ahead Spanish federation would support him financially to make sure he had competitive foreign machinery. They understood that most basic of sporting truisms: success breeds success. 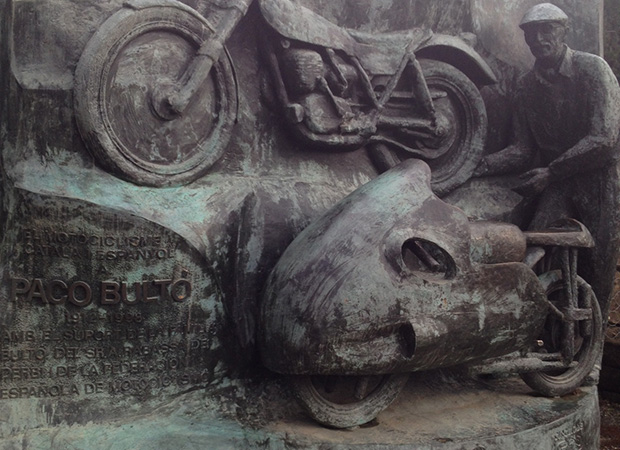 So it all comes down to uniting local hardware and humans. During the first four seasons of World Championship racing from 1949 to 1952, all 16 world titles were won by British and Italian riders, because those were the countries making the best motorcycles. The first non Briton/Italian to win a world title was German Werner Haas in 1953. Guess what? He was riding a German NSU.

Although the Catalunyan motorcycle industry is a shadow of its former self, the concentration of bike factories in the area fomented a motorcycling culture that still inspires many locals to Grand Prix glory. 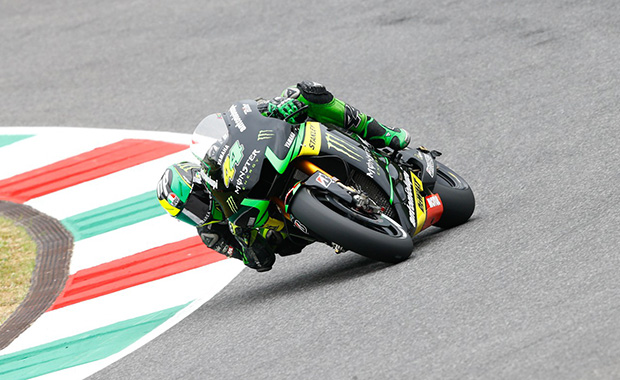 It’s the same in Italy, where the country’s top MotoGP racers of a few years ago were all born within 60 miles of each other, creating some kind of Italian magic circle. Valentino Rossi, Loris Capirossi, Andrea Dovizioso, Marco Melandri, Alex de Angelis and Marco Simoncelli all hailed from a tiny region in the north east of a country that measures almost 1000 miles from top to bottom.

Again, the reasons for that extraordinary concentration of talent are historic, going back decades or centuries or even millennia. In 187 BC the Romans completed the straight-as-an-arrow Via Emilia road, which dissects the nation’s MotoGP magic circle. Over the centuries that busy trunk road created local industries – artisans toiling in their workshops building carriages and other travelling contraptions. It is believed that the workers who forged and welded in Enzo Ferrari’s first workshop in Modena and those who built the first motorcycles at the Ducati factory outside Bologna (both towns slap bang on the Via Emilia) were descended from the same stock.

Some people call this area ‘motor valley’, which is why it’s given birth to dozens and dozens of Italian racers and during the 1990s was home to the minimoto craze that got Rossi and the rest started. 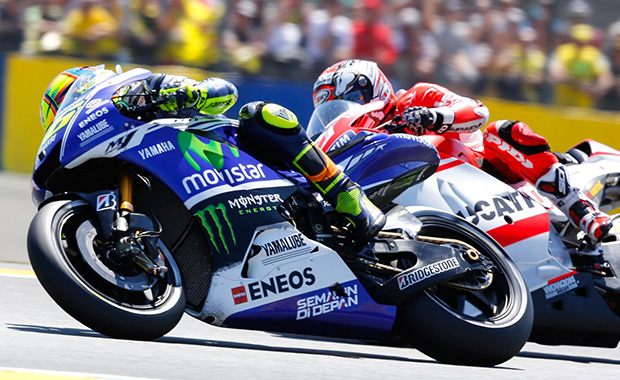 Now back to Catalunya. MotoGP is run from Barcelona. Although Dorna’s head office is in Madrid, much of the business is done in its Barcelona office, where Barcelona-born Carmelo Ezpeleta sits in charge. Dorna also run the Spanish championship, which, because it’s a brilliant series for bringing up youngsters, has now been blessed with the status of a European series by the FIM. The Catalans are so imbued with motorcycle culture that they know how to raise great racers and the sport’s profile guarantees huge media coverage which generates plenty of sponsorship. Again, success breeds success.

Funnily enough, the date for the referendum on Catalan independence is set for November 9, the day of the season-ending MotoGP round at Valencia. However, the Spanish government in Madrid insist they will not allow Catalunya to become independent. It’s not allowed in the constitution, they say. Others say the constitution can be changed. 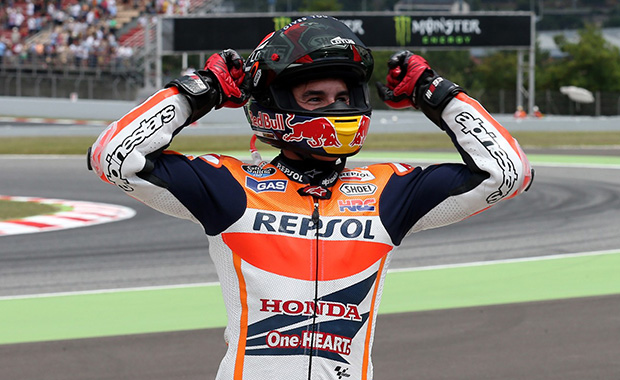 This is obviously a huge issue in Spain, so much so that Márquez was asked about his feelings on the subject last weekend. Sensibly, he stood firmly on the fence. “It’s difficult for me to say one thing or the other, because if I do say something it will be difficult for everyone.”

Finally, to show how we all walk in the footsteps of history, George Orwell, author of the 1938 book Homage toCatalunya, fought against Franco’s fascist army on the Aragon front, where he was shot in the neck and hospitalised in Lleida, where the Márquez brothers now do dirt-track training. He was then moved to convalesce in Tarragona, where Aussie MotoGP immigrant Jack Miller lives.