Four races into 2017 and the racing is more unpredictable than ever, which is why even MotoGP’s cleverest engineers left Jerez confused 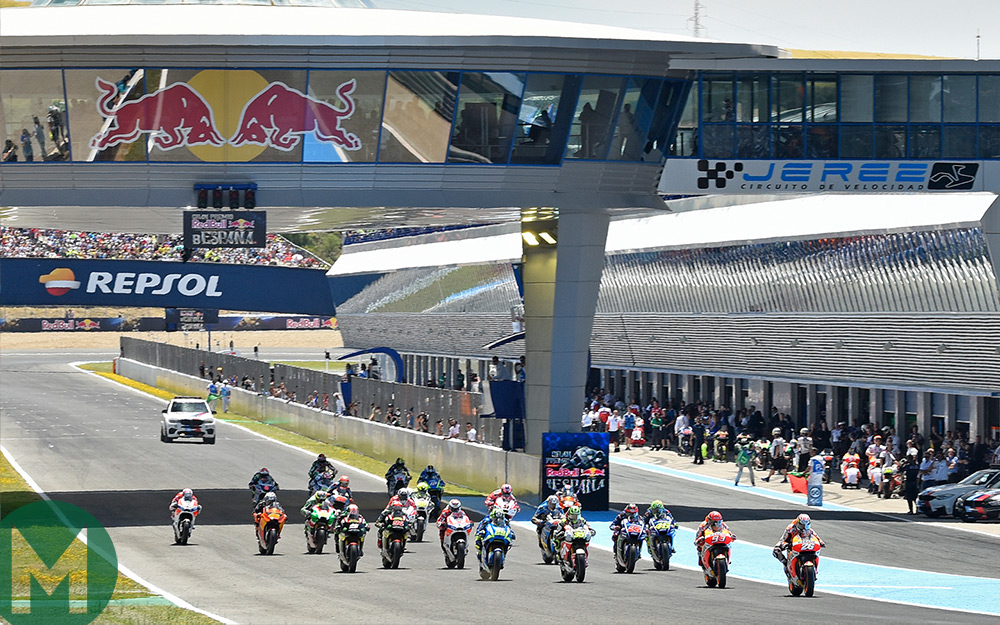 In 1991 Wayne Rainey referred to the start of the European Grand Prix season as the start of “the ground war”, because in that year the GP circus arrived at Jerez shortly after the first Gulf conflict.

Many riders still think of Jerez as the place where the title race gets real, because the out-of-Europe season-openers can be a bit rare-groove. Even Valentino Rossi still holds that opinion, kind of. “I don’t want to say Jerez is the start of the real championship, but…” said the seven-time Jerez winner on the eve of the 31st GP at the Andalusian track.

Rainey spoke of the ground war as separate from the rest of the championship because European tracks are different, because teams operate out of elaborately equipped trucks, instead of flight cases, and because the riders live in the paddock.

Well, the MotoGP riders do. They luxuriate in motorhomes so shiny that they hurt your eyes, while the Moto2 and Moto3 riders commute in and out of the paddock in rentacars, unless they can afford 2500 euros a weekend to stay in one of the truck-based hotel pods owned by GP-winner-turned-banging-DJ Fonsi Nieto.

The European paddock is still a special place but it’s a shadow of its former self. It’s no longer the rambling campsite where the millionaires’ motorhomes were parked next to the rusting campervans of the strugglers. And no longer is each evening enlivened by the mouth-watering smell of a few dozen barbecues and soundtracked by parties thrown by riders and friends, either celebrating the joy of victory or drowning the sorrow of defeat.

Sorry, I’m getting all misty-eyed with nostalgia and badly side-tracked. What I’m trying to say is: the results of the flyaways can be a bit misleading, so Jerez is usually the first race where we can have a proper go at figuring out what’s happening.

But not this time. MotoGP fell through a rabbit hole on Sunday, just like Alice did in Wonderland. Logic turned into nonsense, just as the hopes of some riders turned to dust.

Racing is usually a logical process of clever people working around the laws of physics. After each MotoGP race these engineers will debrief you in a matter of minutes: this is why the Honda worked here, this is why the Yamaha didn’t, and so on. 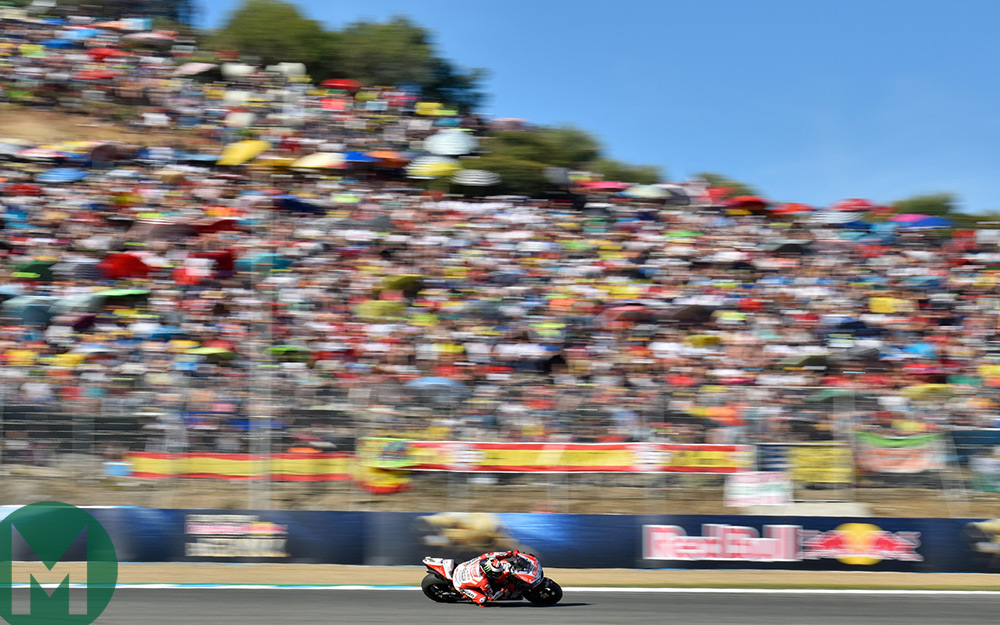 Not this time, however. I wandered the back of the pits on Sunday evening searching for an answer to this weirdest of races, but not a single engineer with whom I spoke (in other words, those who would stoop to speaking with me) came up with a viable theory to explain the events.

It was certainly a weird race. The factory Yamahas that scored a one-two last year were nowhere. And the factory Hondas that were nowhere last year scored a one-two. And Ducati, which usually has a horrible time at Jerez, was on the podium, with Jorge Lorenzo grinning the biggest grin he’s ever grinned. The last time they did that in the dry was in 2009: way back in the Casey Stoner era.

You would think that Guy Coulon, crew chief to Monster Tech 3 Yamaha’s Johann Zarco, would know the secret. But even the Frenchman wasn’t sure why his rider had done so much better than the factory Yamahas.

“I cannot explain,” shrugged Coulon, which is bit like Albert Einstein telling you he can’t work out what two plus two equals. “Maybe tyres. Johann and Jonas [Folger] used the medium front, but the other Yamahas used the hard front. Johann can use a softer tyre and a soft front spring because he is very smooth on the brakes. But I don’t think the different chassis [Tech 3 use 2015/2016 chassis, Movistar use 2017 chassis] make much difference because they all have similar geometry.”

Cal Crutchlow’s LCR Honda crew chief Christian Bourguignon was similarly befuddled. “Why did Honda dominate at what’s usually a Yamaha track? I have no clear answer,” he said. “In warm-up Maverick Viñales was so fast that everyone thought he would be hard to beat, but in the race he struggled.”

However, Bourguignon did have a couple of theories. “Some people say there are so many spectators here that a lot of dust gets blown onto the circuit, but I don’t believe that. I think it’s more a case of short circuits like this, where the Moto2 race is a lot of laps, they put down a lot of rubber at every corner, then the track loses grip. Another reason could be the track temperature, it was much hotter than in practice and qualifying.”

When the race started Dani Pedrosa and Marc Marquez disappeared on their Repsol Honda RC213Vs, while Viñales had no front grip on his Movistar Yamaha and team-mate Valentino Rossi had no rear traction on left-handers.

In fact, the mystery of Jerez wasn’t really a mystery. MotoGP didn’t so much fall down a rabbit hole on Sunday, as fall down a rubber hole.

Jerez has always been a strange race track and hyper temperature-sensitive. Riders visit in the winter, blow the lap record to smithereens, then return in the summer and try in vain to get even closer to their earlier pace.

On Sunday most riders chose the hard front and asymmetric medium rear, including Pedrosa, Rossi and Viñales. Somehow Pedrosa’s RCV generated rear grip, whereas Rossi had so much wheelspin through left-handers that “we were lucky to finish”. 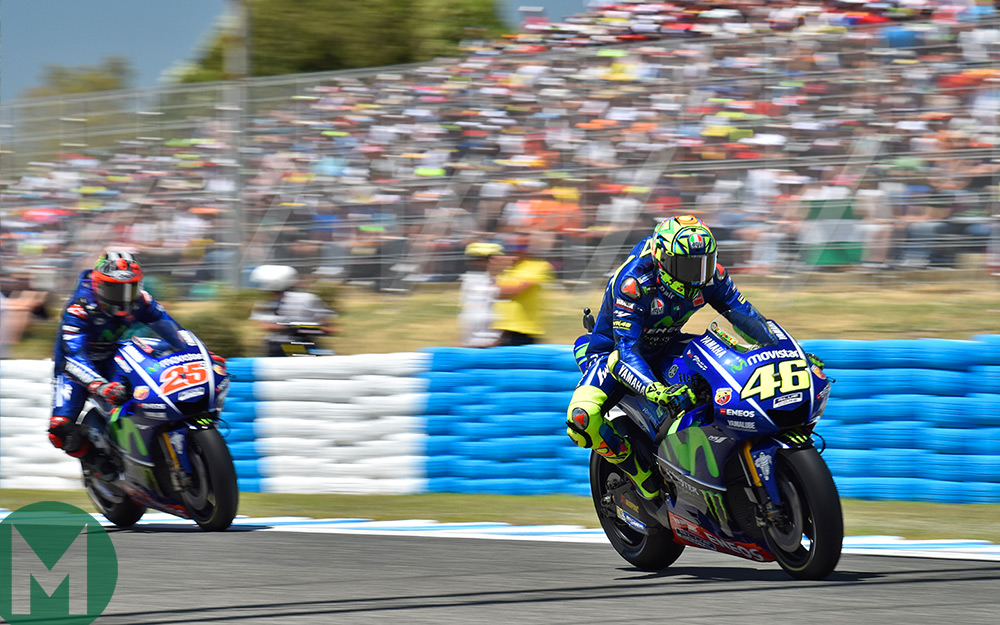 Rossi found himself in no man’s land on rear-tyre choice: the hard was too hard and so too was the left side of the medium, but the soft was way too soft. His crew devised a chassis balance/traction control combination to reduce his problems, but this time the rabbit stayed firmly in the hat. That’s what happens in Alice’s Wonderland. Rossi must be worried.

Viñales’ Sunday was even curiouser: he topped warm-up, but was sideswiped by a lack of front grip in the race.

“I had no feeling from the front,” he said. “The Yamaha is usually good in fast corners but I nearly crashed three times at turn 11 (Curva Alex Criville, the fast right, three corners from the end of the lap).”

So what was going on here? We already know that Jerez is very temperature sensitive. But there was something bigger at work on Sunday.

Every make of race tyre varies in performance from one track to another and even from one day to another, but the Michelins do so more than most. As Rossi said on Sunday evening, “now every race track is another story”.

This is a nightmare for engineers and riders who want tyre performance to remain consistent, so they don’t have to reinvent bike settings and riding techniques from one track to the next.

“With Michelin it’s not easy to manage every weekend,” said Andrea Dovizioso. “Every weekend is different. The situation is never stable, so you must be smart to manage every situation. Things are much better than last year but the character is very similar. Every weekend you have to adapt and understand what’s going on. It’s not so easy but it’s the same for everyone.”

This year’s Michelins are better, but a certain amount of inconsistency is good for the racing because it forces riders and teams to think on their feet, adapting to each new situation as it comes. They can never pack the truck after one race, happy that they’ve got everything figured out. Because they know they will have to start doing the sums all over again when they get to the next race.

The important thing to remember is that everyone gets the same tyres. The window of peak performance may be narrow but every team has the same chance of getting inside that window. The fact that one team gets there one weekend and another team gets there another is good for the fans: the engineers and the riders can never relax and the fans can never predict the result.

Consider the first four races of 2017. Both factory Yamaha riders climbed the podium in Qatar and Argentina, so that some people were already predicting a Viñales walkover. At the same races not a single Repsol Honda made the top three. Then Márquez and Pedrosa finished first and third in Texas and scored their first one-two at Jerez. Yamaha had just one man on the podium at the third and fourth races.

And who knows how it will be at Le Mans? Those who left Jerez with grins on their faces may have to swap with those who headed home wearing frowns. Le Mans could be 180-degrees different: all depending on the track, the temperature and the tyres.

Viñales’ front-tyre disaster was Sunday’s only real mystery. Track temperature increased from 23 degrees in warm-up to 41 degrees in the race. Was that the explanation, or did he get a bad tyre? His lightning-quick pace in Monday’s test suggests a dud tyre was the problem.

Tyres are made in batches and it’s impossible to maintain perfect consistency from one batch to another. And MotoGP tyres often go through several heat cycles: they get heated on tyre racks, then they cool down if unused. This cycle can change their grip character, but Michelin make sure that riders keep race tyres aside that haven’t gone through heat cycles.

All this may be true but the fact is that Michelin’s tyre allocation didn’t match the hot conditions at Jerez. The window shrank too much – some riders didn’t so much miss the window as fall out of it. The good news is that Jerez will be resurfaced this summer.