Last year Ducati’s Gigi Dall’Igna maddened many with his wings, now he may have solved an age-old problem with Formula 1-inspired jounce-dampers 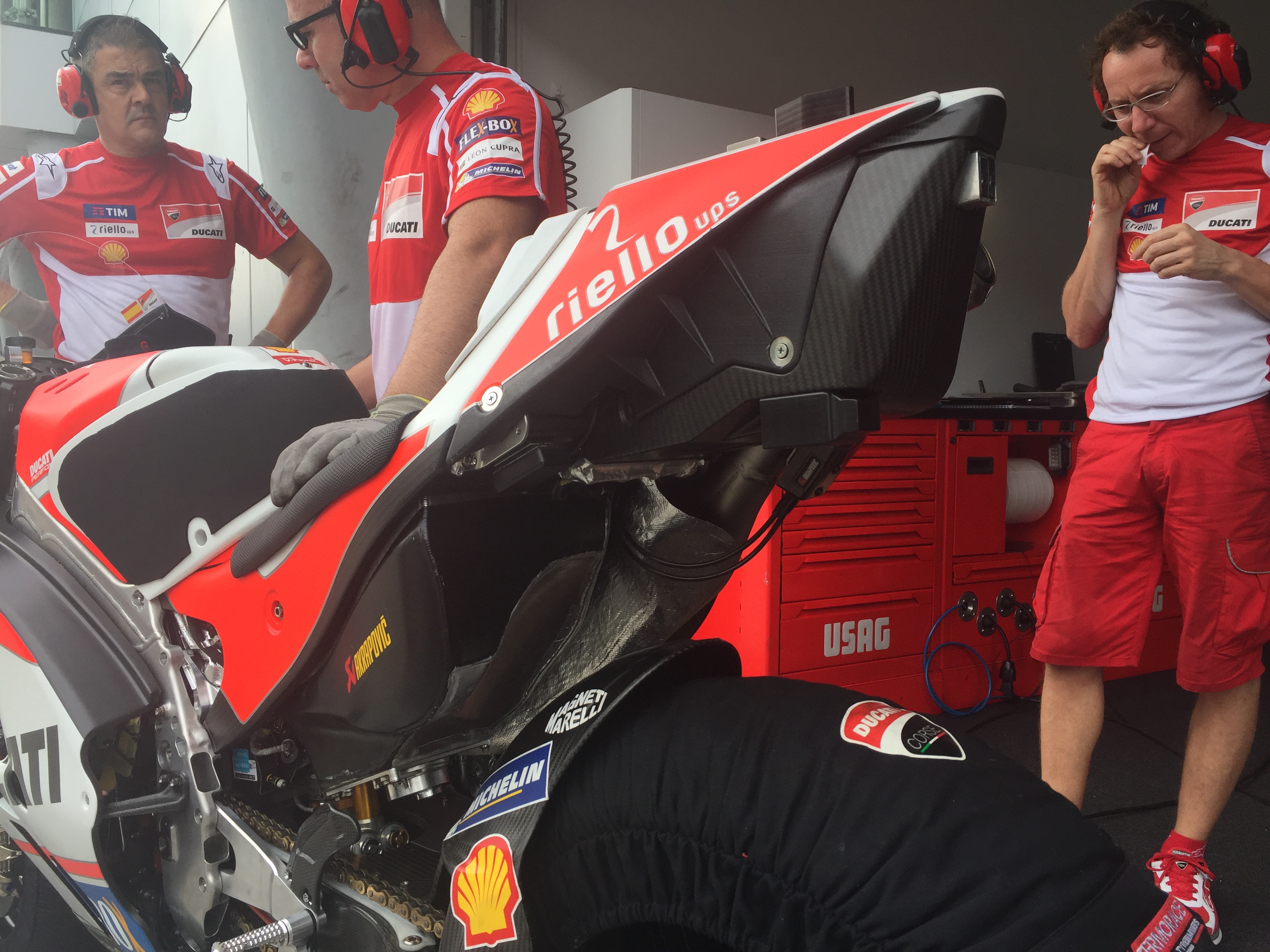 This year’s brand-new MotoGP bikes are currently on their way from Malaysia to Australia for the second preseason tests, which take place next week at Phillip Island.

If you are a motor sport fan of a James Bond bent it’s tempting to imagine an industrial-espionage agent dodging through airport security to stow away aboard Dorna’s cargo plane, where he prises open Ducati’s flight boxes to disassemble that little black box at the back of Jorge Lorenzo’s GP17.

Make no mistake, this stuff does happen. Some years ago, when Michelin dominated MotoGP, it also supplied its super-secret MotoGP tyres to Honda’s British superbike team. At the Mondello BSB round someone broke into the Honda truck under cover of darkness and removed one rear slick. No one knows who took the tyre, but how could anyone have wanted it for anything but dissecting the rubber and casing to discover its secrets?

After last week’s Sepang tests there is still plenty of speculation about what’s inside Ducati’s little black box. I guessed it might contain a chatter-damper or (more fantastically) a gyroscope that optimises the motorcycle’s dynamics during acceleration and braking.

A gyro might be illegal because MotoGP rules state that ‘electronically controlled suspension and ride-height systems are not allowed’, so a chatter-damper makes more sense, because tyre chatter is a major performance inhibitor in bike racing.

Chatter is caused by high-frequency resonances – emanating from the chassis, suspension and tyres – which can overwhelm the suspension hydraulics. The chatter vibration is thus transferred to the tyres, with a disastrous effect on grip. Particularly severe attacks defeat the suspension so completely that you can sometimes see daylight between tyre and racetrack. And daylight doesn’t grip very well.

Even worse, chatter usually appears entirely unannounced, like an unwanted guest at a party: you’re not sure why it’s come, you’re not sure how to get rid of it and you know that things will go very wrong if you don’t.

In last week’s blog I told the story of Wayne Rainey’s Team Roberts engineers who accidentally created their own anti-chatter damper in the very early days of data-logging.

“We learned about chatter and the moment of inertia of the frame in a strange way,” recalls Tom O’Kane, GP racing’s first full-time computer expert who now works for Suzuki. “We used to run a data-logger in the seat hump of Wayne’s bike during practice. Everything would go perfect, then the mechanics would remove the unit on Saturday night, to save some weight for the race.

“Wayne would come in after the race, saying, ‘what the fuck happened? The bike chattered its brains out!’ Hmm, we thought, it must have been a dodgy tyre. This happened at three races in a row and finally we realised that the datalogger sitting inside the seat hump was curing the chatter. The unit only weighed two kilos, but it was a long way from the centre of the bike. The moment of inertia increases by the square of distance, so if you double the distance from the centre of the bike you quadruple the effect.” 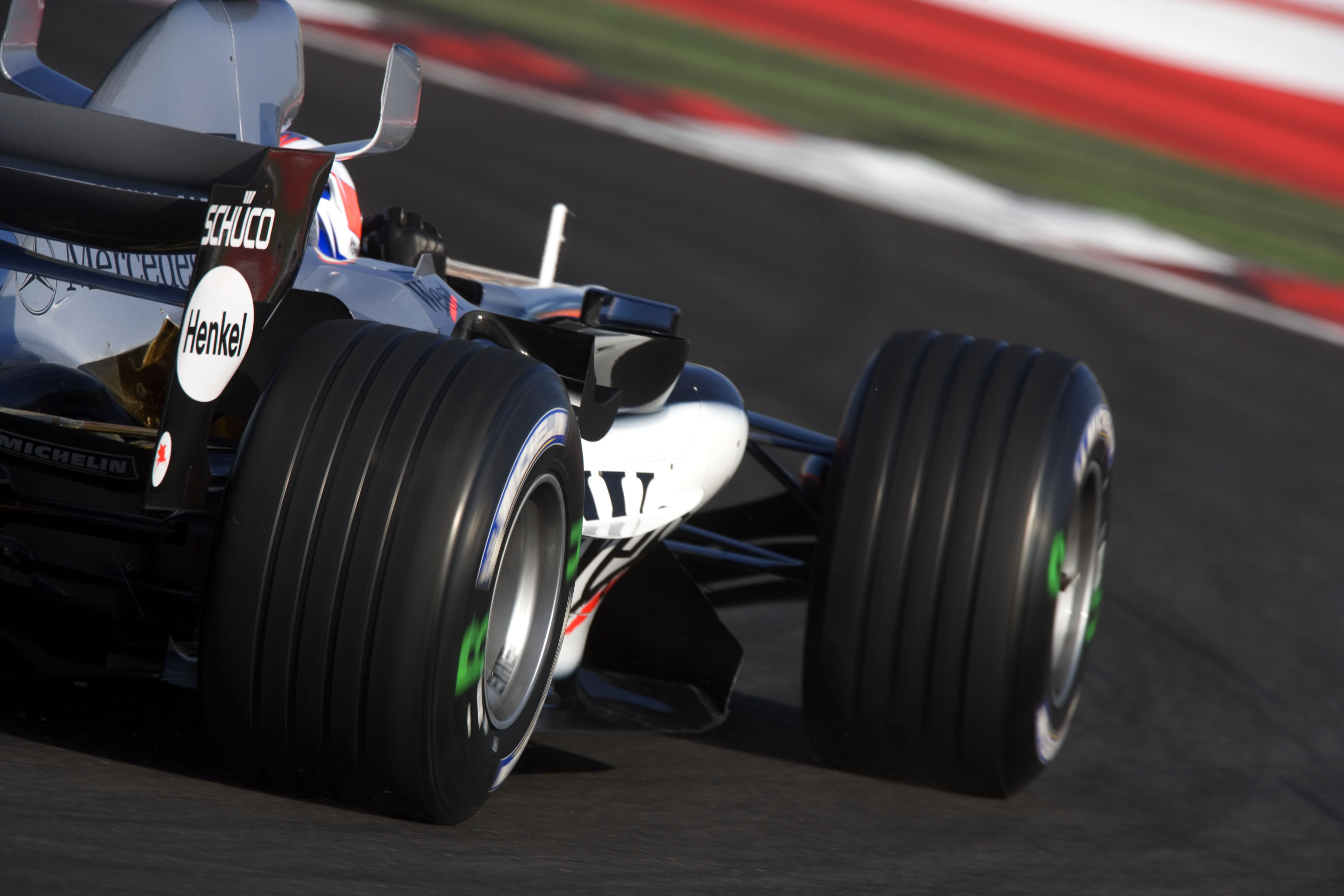 Why else would Ducati fix a box at the very rear of their motorcycle, which is the worst possible place to add weight, as far as basic steering and handling go?

Anti-chatter mass-dampers were first used in Formula 1 by Renault in 2005. These units controlled a sprung weight via springs and damping fluid to neutralise chatter, by imposing a calculated force opposite to the movement of the chatter. Ultimately, they were banned because the sprung weight was deemed to be moveable ballast and therefore illegal.

At the same time, McLaren introduced something much cleverer: a J-damper or jounce-damper; the J standing for jounce, an amalgamation of jump and bounce. The technology was conceived by Professor Malcolm Smith at Cambridge University and won its first race, with Kimi Räikkönen, at the 2005 Spanish F1 GP.

The correct scientific name for this technology is an inerter, which is very basically an electrical version of a mechanical damper system, in which mechanical force equates to current and velocity to voltage. An inerter unit takes the linear energy produced by chatter and changes it into rotational energy, which is stored in a flywheel and then released.

This vital and top-secret technology was recently licensed by Cambridge University to Penske Racing Shocks, who now sell them to anyone who wants them, from F1 teams to Ducati.

Fitting an inerter to a motorcycle makes a huge amount of sense because chatter can cost a rider a race, or even a title. For example, Casey Stoner lost the 2012 MotoGP championship largely due to a front-end chatter problem caused by Bridgestone’s front slick.

Stoner’s otherworldly talent usually allowed him to ride around problems that would beat other riders, but smoother riders who load the tyres more consistently through corners tend to suffer worse chatter. And there are few smoother MotoGP riders than factory Ducati men Lorenzo and Dovizioso. Thus jounce-dampers could be a huge help to them, especially because harder tyres tend to cause the most chatter. 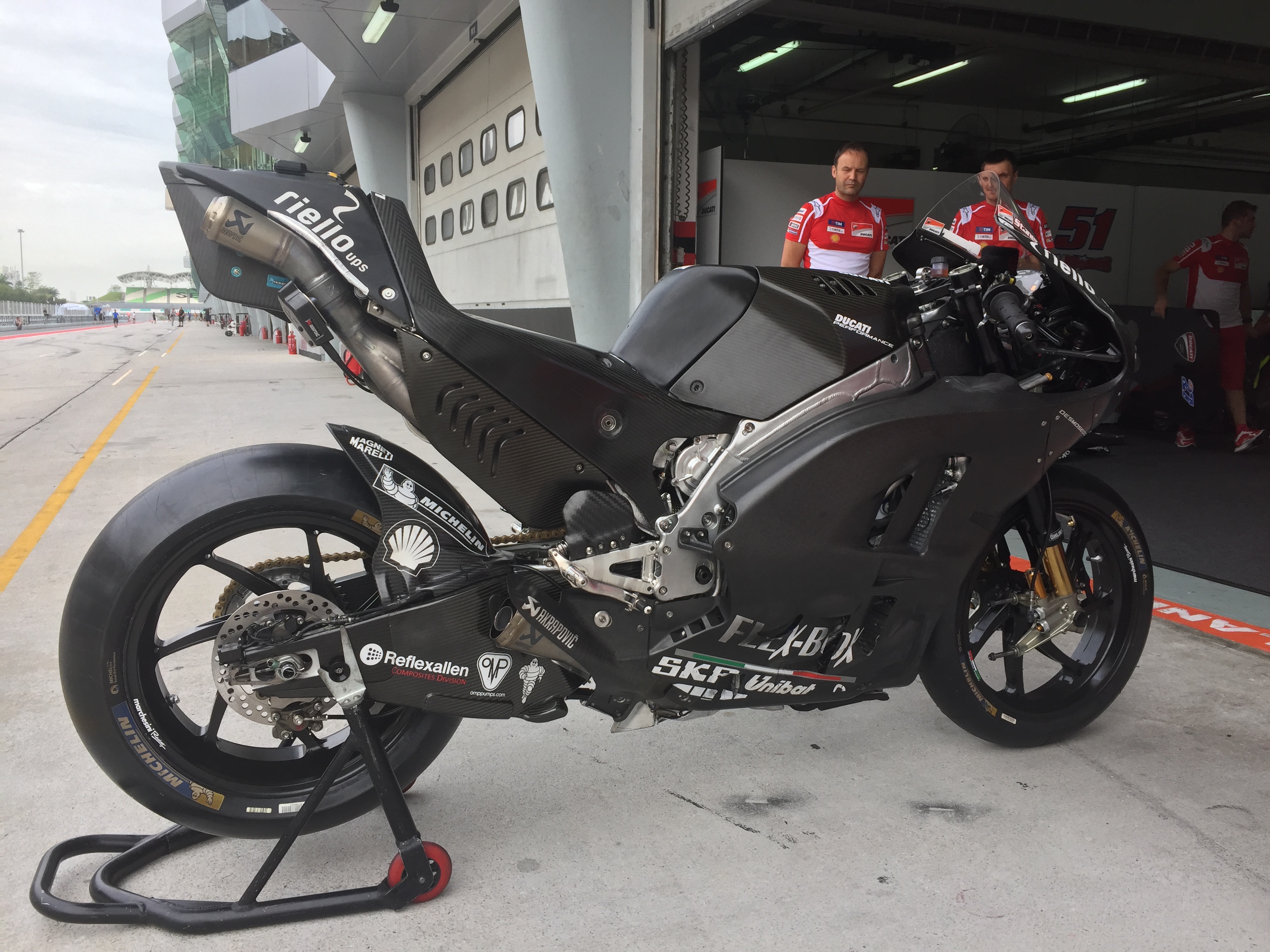 At last October’s Motegi GP Lorenzo experienced bad chatter with Michelin’s hard- and medium-compound front tyres, so he had to race with the soft front, which no doubt contributed to his crash in the final laps that ended his title hopes. And Dovizioso suffers from chatter even more than his new team-mate.

“When Dovizioso has vibration he has no grip,” says Michelin’s Nicolas Goubert. “Vibration is something we have to keep working on. Vibration at the front of a race bike can happen for different reasons – sometimes it can be the tyre, sometimes it’s a combination of suspension and tyre rigidity, so it’s a very specific problem. Some riders are more sensitive to chatter. As soon as Dovizioso gets a little chatter he cannot push, whereas some riders can have double the vibration and they don’t care.”

Reigning champion Marc Marquez may have an advantage here because his spectacular flick-it-in-and-drive-it-out cornering technique allows him to choose a harder front tyre without suffering so much chatter. Meanwhile other riders who want to use hard tyres for maximum race-long performance can’t because they fear the chatter. Thus Ducati’s jounce-damper should allow Lorenzo and Dovizioso to use harder tyres to for better grip all the way to the chequered flag.

No doubt Gigi Dall’Igna hopes he will be laughing all the way to the podium in Qatar and elsewhere, while rival factory engineers frantically contact Penske for their own jounce-dampers. But maybe not. MotoGP’s rule-makers are already cloistered in meeting rooms, debating the legality of this new technology.

Of course, there’s always the possibility that we are getting our knickers in a twist about nothing. Ducati’s little black box may be no more than a device for gathering data during testing, in which case it will have disappeared by the time we go racing in Qatar. But somehow I doubt it.