Aprilia had an up-and-down 2017, so what does the Italian factory need to do to make Aleix Espargaró and Scott Redding competitive in MotoGP 2018? 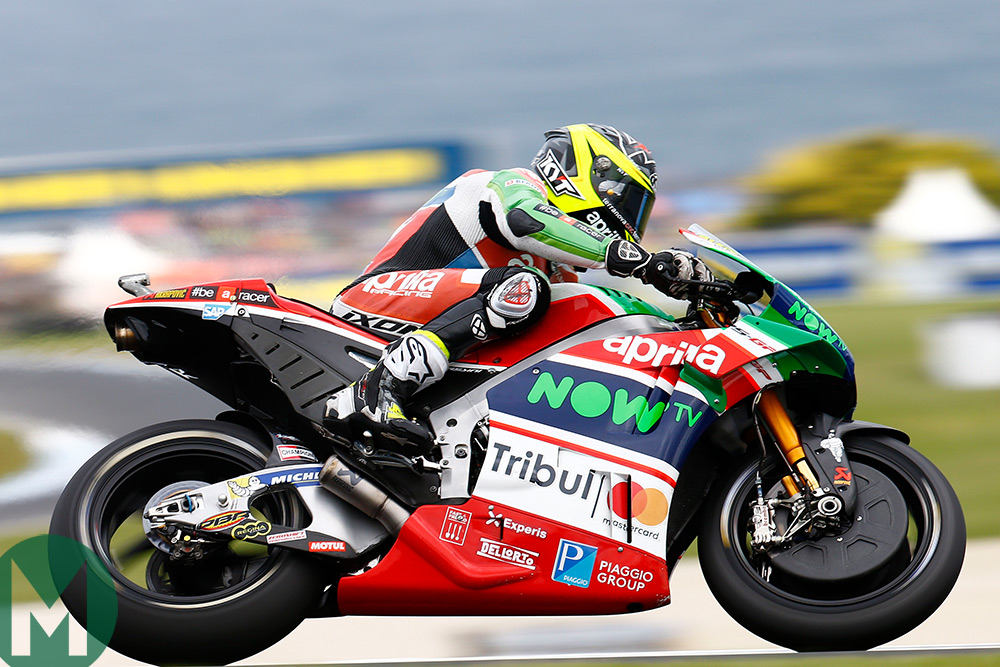 Aprilia is MotoGP’s underdog; the factory with the smallest race department of them all.

Racing manager Romano Albesiano has 70 staff working with him at Noale, which is considerably less than most of his rivals. Suzuki probably has MotoGP’s second smallest race shop, although the company won’t reveal numbers.

It’s a fact of racing life that budgets matter because money buys the best riders, the best engineers, the best R&D facilities and so on. Aprilia does pretty well, all things considered, but needs to do better in 2018.

Last year was only the factory’s second season with its RS-GP MotoGP bike. Before that Aprilia raced a glorified CRT machine, powered by an RSV4 Superbike-based engine. No surprise then that 2017 was a year of ups and downs with more of the latter, but the occasional glimpse of promise.

Espargaró went particularly well at Aragon because the RS-GP suits the circuit and because Aprilia had just taken some important forward steps during a private test session at Valencia.

“The RS-GP is the best frame I have ever ridden,” says Espargaró. “It suits my style because I need to feel the front a lot, so I can brake super, super late and carry a lot of corner speed. We have a little less power than the others, so I have to use more corner speed to make up for this. The rear tyre spins, like it does with every bike, but we are one step better than the others on this. There are lots of long corners at Aragon where you get a lot of spin when you are on the edge of the tyre, but good rear grip is one of the most valuable things we have.

“We also have good corner-exit traction. For example, out of Turn 15 [the tight left-hander that leads onto Aragon’s long main straight] I had better traction than the other guys, so I was able to catch the bikes ahead and get a perfect slipstream.”

However, one good race result doesn’t make a good season. And Albesiano knows that.

“How you judge our 2017 championship depends on your perspective,” says Albesiano. “From a technology and performance point of view, we were very happy, because we grew up fast, achieved a performance level that surprised us and we learned how to make the bike fast in every part of the weekend. On the other hand, if you look at the points we scored, we are disappointed. We made some mistakes on the technical side and the riders made some mistakes, but everyone was pushing 110 per cent. The next step for 2018 is to be consistently close to the front, which is even more difficult, but I think we have the means to achieve this.”

“Aleix had three engine failures in races,” adds Albesiano. “The first two were caused by extreme high rpm. At each corner you plan to reach a certain rpm, but then you get extra rpm from wheelspin on bumps. One of the failures was at Barcelona, but the damage started at the previous race at Mugello [like Yamaha’s 2016 Mugello blow-ups]. The third failure, at Silverstone, was caused by a bolt coming loose inside the engine. We found a way to fix the rpm problem with a mechanical modification. It’s all part of the process.

“The good points of our bike are good turning, plus we are very strong entering the corners with the brakes, we have good traction and we are quite gentle with the rear tyre. Overall it’s quite a good bike – for 2018 we need to improve things like the weight. We started last season on the minimum limit, but then we added some extra devices to the bike and it became a little fat. We fitted a more complicated exhaust, a more complicated inlet system and some more thermal insulation. Everyone is trying to improve the bike, so new things get added…

“Mass centralisation is something else we want to improve, because you can never have enough. Last year we made a major redesign of the bike’s mass position – raising it and moving it towards the rear, always trying to move the heavy parts as close together as possible. For 2018 it’s more a matter of moving the components that are still a long way from the centre of mass. We believe that turning is very much related to the centre of mass, so we are always trying to improve this. 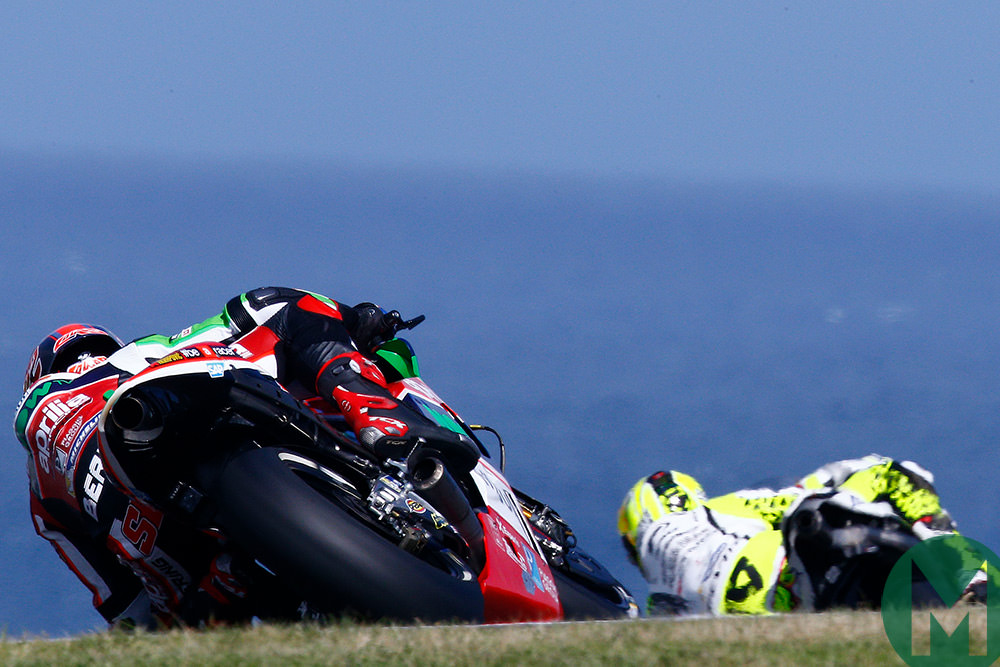 During the winter Aprilia has also been working hard to improve engine cooling, aerodynamics and ergonomics, so the ride can be more comfortable over race distance, an important performance consideration.

Espargaró has his own priorities. “Overall the bike is really good now,” he says. “We are really close, but we know we still have some weak points that we must improve. We are very good in braking and entering corners with the brakes, but we suffer more in longer corners where the front isn’t loaded by the brakes. So the neutral phase – brake off, no gas – is the most difficult thing for us. Engine-wise we have made some big steps, but we can always improve.”

Aprilia contested the last five races of 2018 with Ducati clone aerodynamics. Espargaró used this design for the first time at Aragon, where the aero parts were 3D-printed. Lighter carbon-fibre was introduced later.

“I like the aero a lot,” says Espargaró. “It doesn’t make a big difference with wheelies, but the best thing is the stability out of the corners, the turning, the stability in fast corners and most of all the braking.”

The Spaniard, formerly with Ducati and Suzuki, has a new team-mate this year, with Scott Redding replacing Lowes. Following Lowes’ gloomy experience in 2017, Redding asked for assurances that he will get the same machinery as Espargaró. “For sure, it was no problem to guarantee equal treatment for Scott,” says Albesiano.

Aprilia will commence its 2018 season alongside its rivals at Sepang, Malaysia, on January 28-30.