The reigning world champion and world number two have given us much entertainment over the past year and a half, but can they ever match the thrill of watching Schwantz and Rainey? 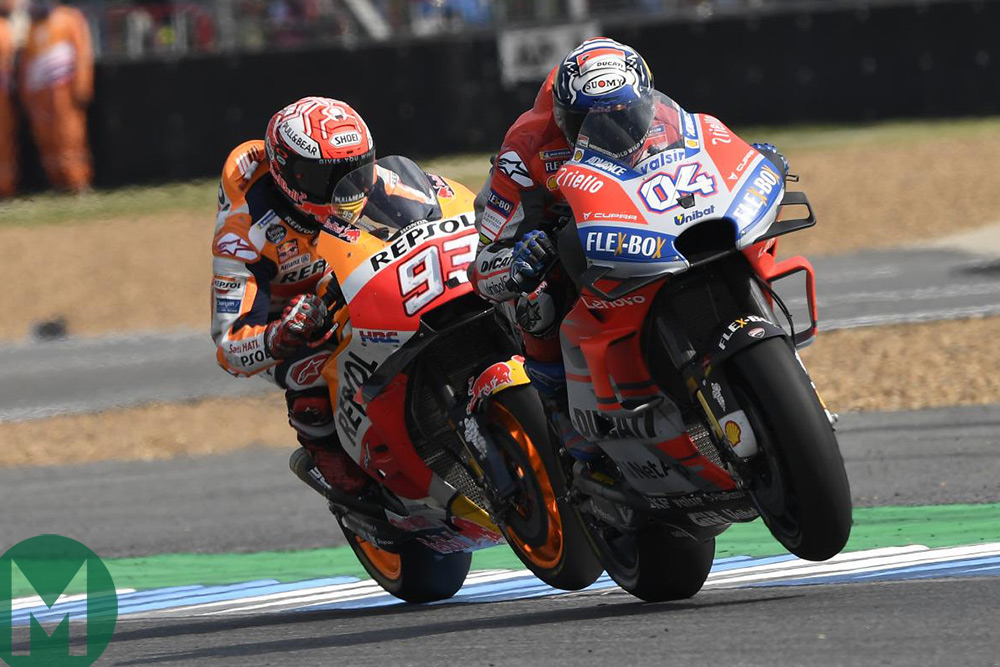 Someone in Sunday’s post-race media conference asked Marc Márquez and Andrea Dovizioso if they are the Kevin Schwantz and Wayne Rainey of today. This was a good question, especially after that last-lap slugging match, which brought back memories of the greatest last-lap shootout between the two Americans, who had made Grand Prix racing their own in the late 1980s and early 1990s.

Sure, it’s a stretch to compare the epic 4.2-mile lightning-fast blast that was Hockenheim with the mundane asphalt doodle that is Buriram, but here goes…

It’s May 1991, and this is Schwantz’s and Rainey’s second visit to Hockenheim. They are still deadly rivals who mostly care about beating each other rather than winning races. This time, it’s both.

It’s the final lap and the pair are way ahead of the pack, playing scary slipstream games through the deep, dark forest that surrounds much of the ancient German venue.

Both of them know exactly what’s coming: Hockenheim’s long forest loop ends with a sixth-gear straight, then a 90-degree right-hander that takes them into the final section, overlooked by vast concrete grandstands, packed with noisy Germans.

There are no supersized TV screens to tell the fans what’s happening; all they know is what they can hear: the staccato scream of the commentator and the baleful roar of two high-geared 500s in a crescendo, stretched as far as they’ll go in sixth gear.

What happens next is the stuff of racing legend – one of the greatest overtakes of all time – though, as always, there’s a wee gap between myth and reality.

Reigning world champion Rainey is leading, Schwantz wedged tightly into his draft, sucking on the Yamaha’s exhaust fumes. The leader sits up to brake, impossibly late. Schwantz jumps to Rainey’s right and hauls on his brakes; his Suzuki’s rear end skittering this way and that, the rear tyre tapping out Morse code on the asphalt as he stamps on the brake. He is out of control. Will they both go down?

Nearly, but not quite. Schwantz just about gets himself sorted out before the corner, where he’s in so deep that he can’t help but put a huge block pass on Rainey, who has two options: yield or crash. He chooses option one. Schwantz wins the race by less than two-hundredths of a second and is ecstatic. Rainey is extremely pissed (to use the American vernacular). And part of him probably still is.

In fact, what looked like a typical “see God and brake” Schwantz manoeuvre wasn’t exactly that. On the long straight before the stadium Rainey wasn’t using his normal line, so his reference points were different, so he braked slightly early and Schwantz very nearly rammed him. When he jumped out of his rival’s draft his main aim was to avoid a collision, not pull off an unforgettable pass. And the reason he laid so much rubber with his rear tyre was because he had shifted down too many gears, into first instead of second.

At Buriram on Sunday, Márquez had run out of rear tyre, so he didn’t have enough traction exiting the Turn 11 right-hander, which made him easy prey for Dovizioso at the subsequent and final corner. On the penultimate lap the Italian got a run on Márquez out of 11, levelled with him and cleanly out-braked him into the dead-stop Turn 12.

On the final lap Márquez tried to avoid a repeat by eking a little more speed out of 11. It still wasn’t quite enough to prevent an attack, but this time Dovizioso couldn’t get alongside before he hit the brakes, so he had to launch his attack from behind. Those two metres made all the difference. Dovizioso couldn’t quite get his Ducati stopped and Márquez was able to cut back inside to win the race; just as Dovizioso had done to him in Austria and Japan last year, and in Qatar this year.

There was no super slow-mo in 1991, so we never got to dissect Schwantz’s sideways attack on Rainey at several thousand frames per second, but there is now and that final corner was poetry.

Márquez knows the attack is coming, so he’s as late as late can be on the brakes. His front tyre is hopping over the rippled asphalt, which kicks the rear of the bike into the air. The whole motorcycle starts to pivot around the headstock, the airborne rear tyre swinging to the left.

At the same time, Dovizioso has decided that it’s death or glory – metaphorically speaking. He wrenches his bike to Márquez’s right and grabs the brakes, his rear tyre swaying to the right, but in a more controlled manner and never really losing contact with the racetrack. This is important, because in the Michelin era riders need the rear tyre to help them get the bike stopped, which they didn’t in the Bridgestone era. 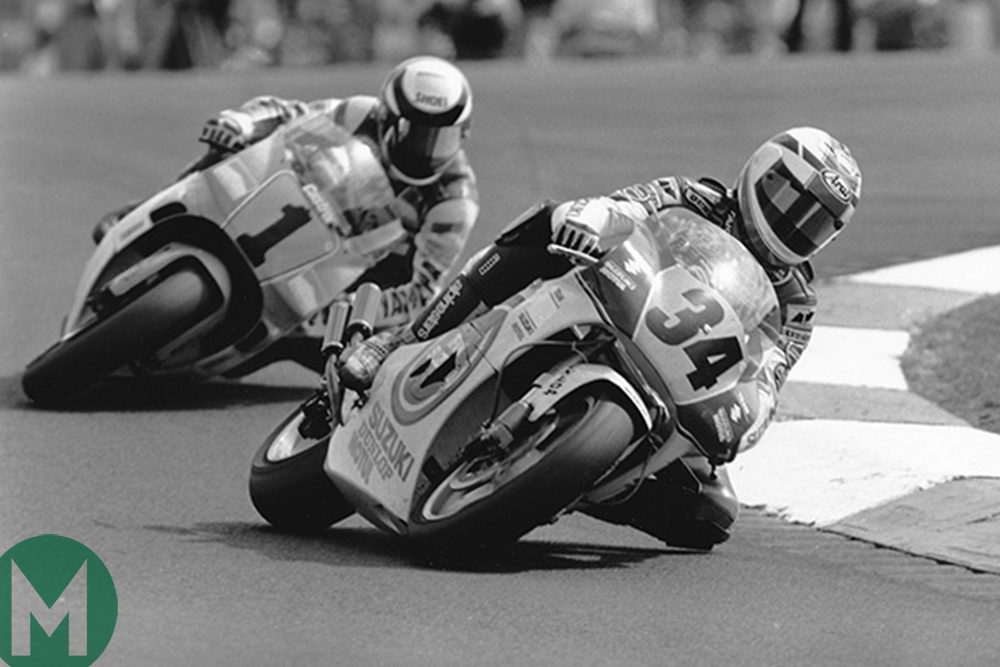 So, which of them is Schwantz and which is Rainey? Such a disingenuous question had Márquez laughing out loud.

“I don’t know, but yeah, maybe I’m Schwantz,” he grinned.

“Dovi brakes more under control, while I’m braking more on the limit, at that special brake point that everyone has in his mind,” added Márquez. “But my target is to change my style. I’m trying to be more Dovi style: smoother braking, lean a little bit and accelerate. But at the moment that’s impossible.

“Today we swapped styles – I was Dovi and he was Marc. He went into the last corner really fast and went slightly wide, but was very, very close to achieving his goal with a kind of block pass, but I was able to stop some more in the last metres. It was the exact same move as in Austria last year.” (But the other way around.)

Dovizioso explains that it’s the different mechanical characters of Ducati’s Desmosedici and Honda’s RC213V that make their duels so entertaining.

“I think Marc’s style goes the same way as the Honda – very agile and aggressive. My style is a bit more relaxed, but you have to ride our bike this way. Marc couldn’t ride the Ducati like he rides the Honda, just like I don’t think I could ride the Honda in the same way I ride the Ducati. That’s why our battles are good, because his approach to braking and his lines are the opposite to mine. We study him and try to be better where he is better, but there is still a big difference in styles and bikes.”

Márquez’s seventh victory of the year – which gives him the chance to seal his fifth title in six seasons next time out at Motegi – didn’t come at all easily. Michelin had created special heat-proof rear tyres for Buriram, which required some tricky changes to the electronics.

“My team was working in the box until 10.30pm [on Saturday] because we had some troubles that we didn’t understand,” he revealed. “I went out in the race with different electronics settings, because we were struggling in a few areas in which we don’t usually have problems. Even in the race I was losing two-tenths accelerating out of the last corner and the first corner. Our electronics weren’t working in the best way, so I didn’t feel the acceleration I wanted.”

Buriram was the opposite for Dovizioso.

“In the past we couldn’t even fight for the podium at tracks where tyre consumption is so high,” he said. “But now we can put Marc in a difficult situation, so I think we have made a huge step.”

Ducati has lost this year’s title fight, due to its struggles earlier in the season, so Dovizioso already has his sights set on 2019.

“We are not racing for the championship,” he said. “We are racing to try to get the maximum results and to develop the bike for next year.”

But are they really the Schwantz and Rainey of now? Yes and no. Márquez is Schwantz, but has already won four more premier-class world titles than the 1993 500cc world champion. Dovizioso is Rainey, but has yet to win a premier-class crown, while Rainey won three consecutively from 1990 to 1992.

The reason they both see something of the American legends within themselves is because they really do share things in common.

Both ways work, although Márquez’s has a greater hit rate, especially in the Michelin era, when the tyres sometimes throw curveballs at the riders. This is where Márquez’s magical make-it-up-as-you-go-along technique leaves his rivals floundering – he has the bravery and skill to push where no one else dares. And he who dares, wins.