It’s almost 40 years since MotoGP’s first carbon-fibre chassis, so with Honda’s and Suzuki’s latest carbon-fibre frame coatings, how long before we see the next fully carbon MotoGP bike? 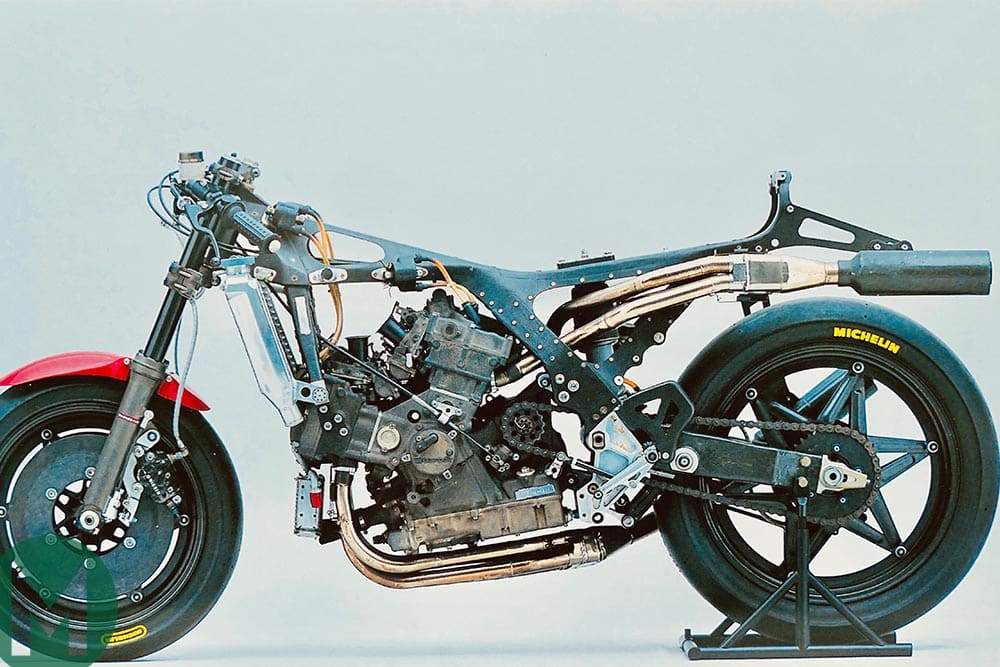 Back in the early 1990s when Kenny Roberts’ Marlboro-moneyed Yamaha 500cc and 250cc team bestrode motorcycle racing the ‘King’ walked into the paddock each morning carrying a shiny carbon-fibre briefcase.

The briefcase – paired with Ray-Ban Aviators and a big, fat Rolex – was the ultimate statement of racing intent: a man at the cutting edge of motorsport technology and with money to burn.

Carbon fibre became the standard chassis material in Formula 1 during the early 1980s, after McLaren engineer John Barnard designed F1’s first carbon chassis. But you can count on the fingers of your hands the number of motorcycle grands prix won by carbon-fibre chassis.

The exotic aerospace material was first used in the premier class by Honda in the same year, when HRC equipped its first NSR500 with carbon-fibre wheels. Crucially these reduced unsprung mass to improve steering and handling.

Freddie Spencer and the carbon-wheeled NSR nearly won the 1984 Daytona 200 – a shakedown outing for the season-opening South African GP, where disaster struck. A rear wheel collapsed during practice, Spencer crashed and he was out of the race. What few knew at the time was that the American had noticed the NSR handling strangely as he flew around the Daytona banking at 180mph during the final laps of the 200. That’s when the wheel had started to fail.

Spencer’s accident taught HRC plenty and no doubt made bike people wary of carbon fibre. Indeed carbon-fibre wheels are now banned, but due to costs and concerns about rims getting damaged during frequent tyre changes.

The NSR’s carbon wheels came from Honda’s most exotic grand prix bike, the oval-piston, 32-valve, 21,000rpm NR500 four-stroke. The NR made its debut at the British Grand Prix in August 1979 (which made this year’s Silverstone event the 40th anniversary of Honda’s current participation in GP racing).

The NR never scored a world championship point against the all-conquering two-strokes, but it was a rolling laboratory for Honda engineers. In 1983, HRC built a futuristic NR500 with a full carbon-fibre chassis: carbon frame, carbon swingarm, carbon wheels, carbon brakes carbon fork sliders and a carbon silencer. The bike was never raced (by then HRC was winning with the NS500 two-stroke) but it pointed the way to the future.

So far, carbon brakes have had the biggest impact on MotoGP. These brakes aren’t carbon-fibre but carbon-carbon, a composite initially developed for the nose cones of intercontinental ballistic missiles. Wayne Rainey tried carbon discs and pads for the first time during practice for the 1988 British GP at Donington. He was so impressed that he insisted on racing them, even though they were unproven. It wasn’t so much the improved braking power that convinced him as the reduced front-wheel inertia that allowed him to flick right to left much quicker down Craner Curves. He ran away with the race, although he nearly crashed on the warm-up lap while trying to get heat into the brakes.

Many smaller constructors experimented with carbon-fibre frames during that era. In 1990 Piero Ferrari (son of Enzo) built a gorgeous carbon-fibre frame for Cagiva’s 500 GP bike. Randy Mamola tested the frame, which steered very accurately but chattered like crazy. It was too stiff.

At the 1985 Suzuka Eight Hours I rode a carbon-fibre-framed Honda CBX750, built by Japanese car-racing constructor Dome. The so-called Black Buffalo worked well and survived intact when I crashed at high speed. To me, it seemed inevitable that this technology would feed into MotoGP, but here we are in 2019 with not a single carbon-fibre chassis on the grid.

However, there are signs that MotoGP is finally moving in this direction. Most of the factories are now playing around with carbon fibre as a frame material, as part of the conventional alloy beam structure.

Last year Ducati used carbon inserts in its GP18 frame, but they don’t feature in the GP19.

In April Suzuki’s Álex Rins used a carbon-fibre-coated GSX-RR frame to win the Americas GP at COTA. The factory introduced this concept midway through last season, when some assumed the coating was only there to hide carbon-fibre sections inserted into the frame to create the right twist points. But the type of weave changes frequently, which suggests the coating is more than a cover and is used to change stiffness character.

Although none of these factories will reveal exactly what they are trying to do with these carbon-fibre components, it’s all about improving turning and grip.

Engineers can be more accurate in tailoring rigidity, flex and twist points with carbon fibre than with aluminium, so they’ve got a better chance of creating exactly the right kind of lateral flex to improve grip and therefore turning. Some engineers believe that the right kind of kind of flex can also create a self-turning effect by twisting the wheelbase around the corner. They also work in this area with different stiffness triple clamps, different steering-head bearings set-ups and so on.

There are other knock-on benefits to these improvements. If the bike turns better the rider can lean less and use the tyres less, so it reduces the risk of crashes. And if the tyres have an easier time during races the rider can use softer, grippier tyres, which improve performance.

Of course, carbon-fibre frame add-ons aren’t entirely new. This tech was especially a big deal in 2009, when Ducati equipped its Desmosedici with a full carbon-fibre chassis and HRC used bonded carbon sections to improve the behaviour of its troublesome RC212V. Suter later did the same in Moto2.

The carbon Desmosedici won seven races in 2009 and 2010, all with Casey Stoner on board. The chassis didn’t last much longer, not because the material wasn’t right, but most likely because Ducati’s concept of using the engine as part of the chassis no longer makes sense when ultra-high lean angles demand chassis flex.

Barnard, whose carbon-fibre chassis transformed Formula 1, still insists the material will one day dominate MotoGP. During the first decade of the new four-stroke class he worked for Roberts’ Proton team, where he found his high-tech plans defeated by lack of vision and lack of budget. (Roberts had long since lost the Marlboro millions)

“Carbon gives you more options than you can shake a stick at,” says Barnard. “You can change the material, the layup and the direction of the fibres to give different properties, which you can’t do with metal.

People talk about lateral flex, vertical flex, all this kind of thing. My answer is that they may be necessary but you need to know the numbers. And these numbers are obtainable – it’s not some mystical science that only occurs in bikes.

“When I was at Team Roberts we started looking at stiffnesses to try and understand all of this. I wanted to make a carbon swingarm, but I wasn’t allowed to, because Kenny would say things like, ‘carbon swingarms don’t work’, full stop. He had had one made years before by Lotus, but did anyone know how stiff it was supposed to be and what they were trying to build? Of course they didn’t, they just built a carbon swingarm.

“It tends to be a bit of a bike thing: if somebody tried something once a few years ago and it didn’t work out of the box, then it’s no good, it won’t work, is the attitude.”

How long before we see the first Japanese carbon-fibre chassis in MotoGP? It could next year or it could be 10 years from now. All I know for sure is this: the scooter I ride around London features plastic panels moulded to look like carbon fibre. And it looks way cooler than ‘King’ Kenny’s carbon briefcase.