Frame flex is the black art of MotoGP chassis design. Here’s why chassis are getting softer, not stronger, despite ever-increasing speeds and horsepower 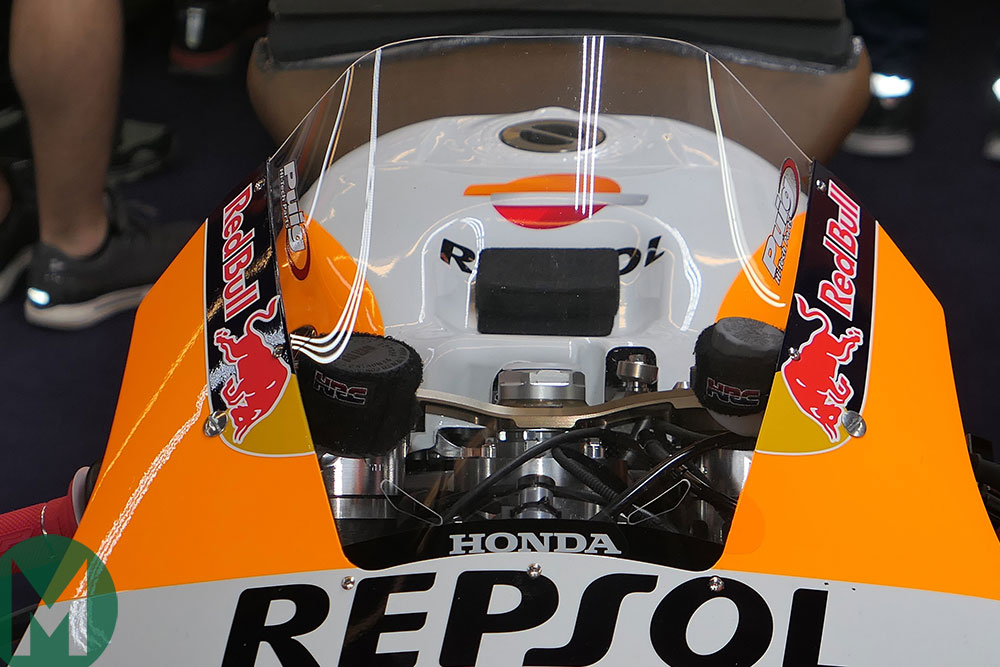 Study this photo of the front end of a Repsol Honda RC213V, particularly the upper triple clamp. Notice how the underside (between the two HRC logos on the left and right) has been scalloped out, so that much of the triple clamp can only be a few millimetres thick.

What does this tell us? That Honda, like everyone else, is making its MotoGP chassis softer and softer.

There are a few reasons for this, but most of all it’s because Michelin’s MotoGP tyres are of a softer construction than the Bridgestones, which the championship used from 2009 to 2015. If the tyres are softer, the chassis must be made softer to match, because both must work together in harmony.

“Historically speaking, the Bridgestone tyres had a much harder construction, so everything was much harder: the triple clamps, the chassis and many other parts,” says Takeo Yokoyama, HRC technical manager. “Since Michelin tyres were introduced we are going softer and softer, to get more feedback, to get more feeling and to make the bike turn better. We are still going in this direction.”

There have been other changes since the Michelins arrived. The stiffer Bridgestone slicks required a lot of load to make them work, so chassis became shorter to increase load transfer to the front tyre on the way into corners and to the rear tyre on the way out of corners. The Michelins need less load, so some factories have slightly increased wheelbase since 2015, while also raising the centre of gravity to ensure the bike still drops into corners nicely.

However, chassis stiffness is the most fascinating area of chassis design and it’s still as much a black art as a science. Engineers want the frame and ancillaries to offer excellent longitudinal stiffness, so the bike stays straight and stable while pulling 1.5g during braking, and they also want enough stiffness so the bike reacts to rider steering inputs.

But once the bike is on its side the chassis needs to flex laterally, because the front forks and rear shock don’t really work once they are past 45 degrees from the vertical. A few millimetres of lateral (sideways) flex provided by a softer frame, swingarm, triple clamps, forks and so on allows the bike to track bumps and ripples better, so the tyres grip the asphalt more effectively, which, of course, is what racing is all about.

More grip can deliver more corner speed, but it also delivers more turning. This is currently one of the engineer’s biggest jobs in MotoGP – helping Michelin’s front slick make the bike turn quicker.

Ducati still struggles in this area – remember Álex Rins riding around the outside of Andrea Dovizioso at Jerez and Valentino Rossi doing the same at Termas? – and Gigi Dall’Igna knows that too little flex in the right places is part of the problem.

Chassis stiffness isn’t an easy science, especially when you’ve got a 270 horsepower engine inside. It’s hazy and mysterious, because there are no exact answers when you are trying to harmonise longitudinal, lateral and torsional stiffness, plus bend points and twist lines that allow the frame and swingarm to flex where you want them to, but not where you don’t want them to.

If this wasn’t already complicated enough, the science is made many times more complex by the fact that every rider wants his frame, swingarm and triple clamps to flex in ways that give him the feeling he likes. For example, while Marc Márquez and Jorge Lorenzo use HRC’s super-thin upper triple clamp, Cal Crutchlow prefers a more rigid version. So there are no hard and fast answers.

Aprilia, which got its RS-GP chassis very wrong last year is on the comeback trail this season, with improved geometry and centre of mass, but its engineers are still going softer with the frame and swingarm.

“We are looking for more softness to see if we gain a bit of turning,” said Aleix Espargaró after testing a softer RS-GP frame at COTA and Jerez.

Swedish suspension company Öhlins – which supplies the entire grid apart from KTM – is obviously involved in this process. Its carbon-fibre oval fork outers offer excellent stiffness during braking, then flex sideways when the bike is in the corner. 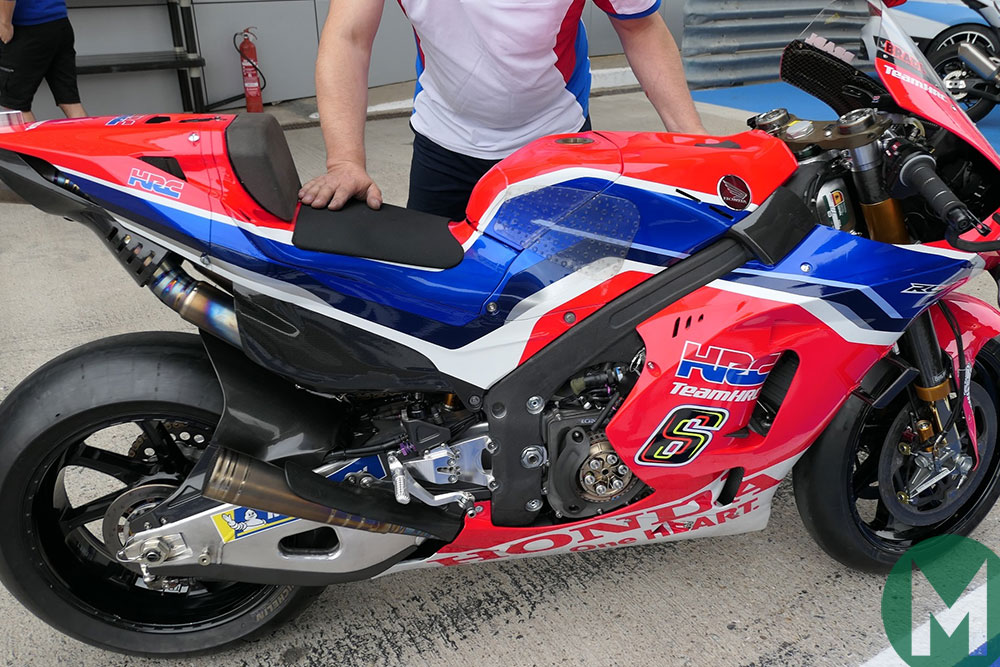 At Jerez Honda unveiled a revised RC213V frame covered with a carbon-fibre skin, raced by Stefan Bradl and tested by Márquez. The frame itself is different and (although I’m no engineer) looks like it’s been designed to retain longitudinal stiffness while increasing lateral flex. The skin is presumably there to alter the frame’s flex character, because when aluminium flexes it tends to return to its original shape too quickly, which gives a snappy feel. In other words, the skin doesn’t so much soften the frame as soften the way it reacts. This is all part of HRC’s efforts to create a more rider-friendly chassis.

Yamaha’s YZR-M1 has been MotoGP’s friendliest bike for many years, which possibly is why it hasn’t made its chassis much softer since the Michelins arrived, according to factory technicians. Others in pit lane believe that could be one reason why the factory is in the doldrums.

2019 MotoGP championship on the Database

Although Michelin’s tyres and ever-increasing lean angles are pushing MotoGP engineers to make their chassis softer and friendlier, the business of chassis flex is an age-old story.

HRC was already onto the science of moderating chassis stiffness in the 1980s: going too rigid, then too soft, then too rigid; starting the process of closing in on the ideal combination of flex types and flex points.

“It was already understood that you could make the bike work better on its side by reducing the stiffness, but reducing rigidity in all directions makes the bike slow to react, so it’s a balance,” says renowned engineer Erv Kanemoto, who helped Eddie Lawson win the 1989 500cc world title on Honda’s NSR500. “Since then we’ve seen the shape of frames and swingarms change, so that when the bike is on its side the rigidity is reduced, but when the bike is upright it’s very rigid.” 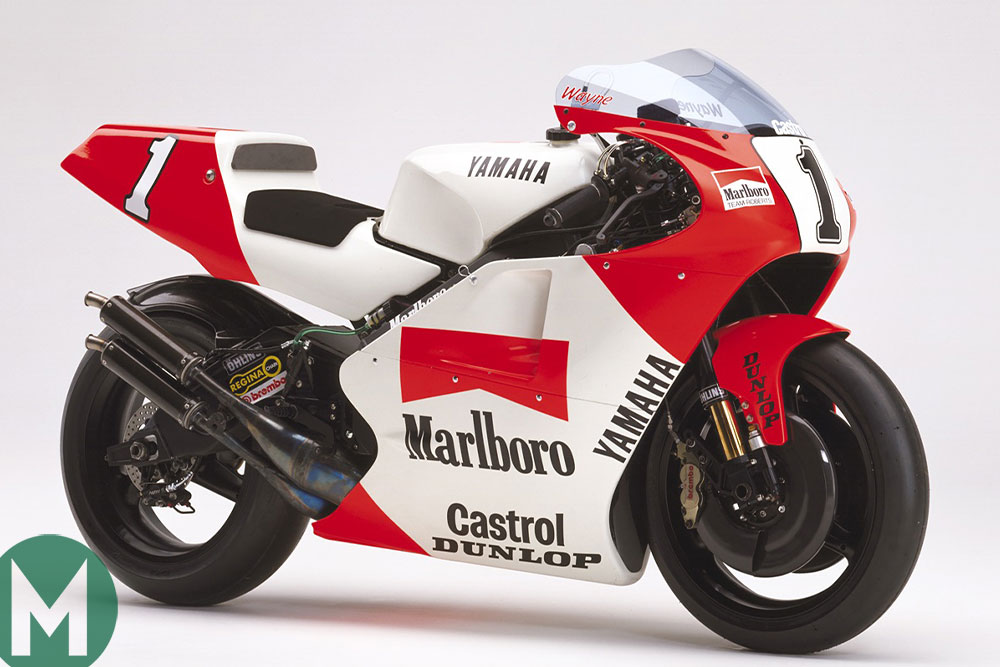 “In 1992 we thought our biggest weakness was that our chassis wasn’t stiff enough,” Rainey recalls. “So Yamaha ended up making the chassis way to stiff, which is why we really struggled in ’93.”

The 1993 YZR500 was constructed from extruded sections, with bigger wheel axles and bigger wheel bearing carriers, all designed to help Rainey go faster. But it did the opposite. “There was no flex at all, so the chassis put all the forces into the tyres,” he adds. “We really struggled until we used the [more conventional, French-made] ROC frame. I won first time out with the ROC, but by then the championship was already more than half done.”

Rainey’s crew chief Mike Sinclair tried everything to make the factory chassis work, even taking a drill and a hacksaw to the frame, trying to introduce flex, so that Rainey could get some feel and the frame would load the tyres in a better way. The bodge did work and taught Yamaha plenty, but not in time to prevent Rainey’s switch to the ROC.

There is probably more science than bodging in MotoGP chassis design now, but creating the right mix of stiffness and flex is still a major area of learning.