Ducati and Honda V4s have won the last 22 MotoGP races, so is it time for Yamaha to ditch its faithful inline-four engine? 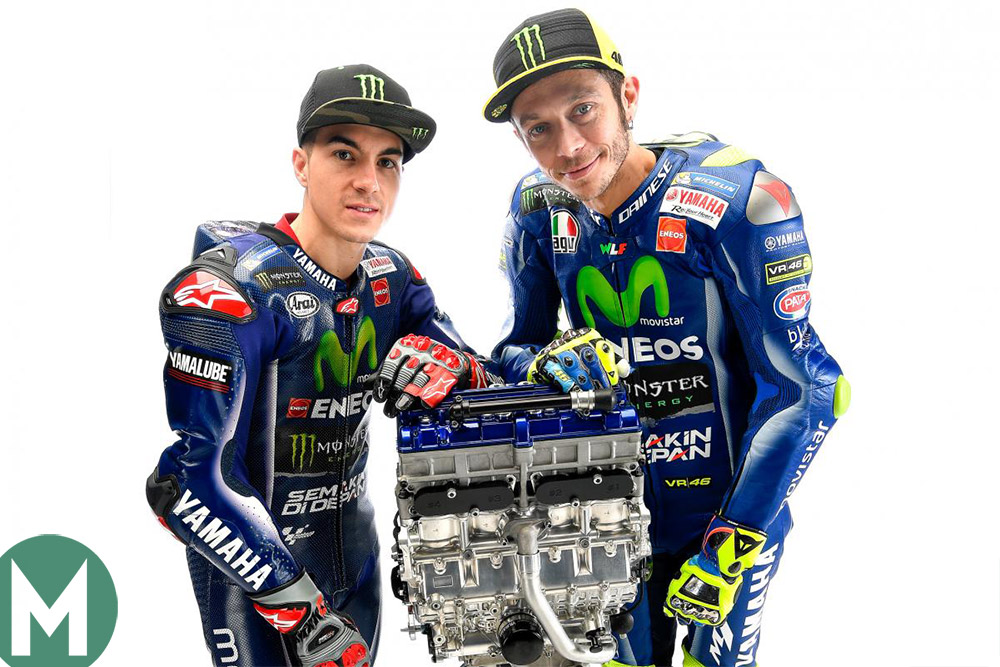 Valentino Rossi finally said it. After finishing a miserable seventh on Sunday in front of his adoring fans, the seven-time MotoGP champion wondered aloud: “Ducati and Honda have V4 engines; we have an inline four – maybe this is the problem…”

But would a V4 M1 really get Rossi and Yamaha back to their winning ways? In other words, is a V4 engine better than an inline-four engine?

It all depends on how you look at it. V4 engines have won the last 22 races, but does that prove beyond any reasonable doubt that a V4 is best, or is it simply a case of Ducati and Honda working more efficiently on their engine internals and electronics than Yamaha?

Most MotoGP engineers believe that V4s and inline fours are like swings and roundabouts: they’re both better in some ways and worse in others. Everything in racing is a compromise. It’s all about maximising your advantages and minimising your disadvantages.

An inline-four engine is more compact, so chassis engineers can move it fore and aft and up and down to find the ideal centre of mass and so on. This is why Yamaha’s M1 has been the best-handling MotoGP bike for the past decade and a half.

Only a few years ago, many wondered if the 90-degree V4, so beloved of Ducati, had had its day. The engine was too long, they said, which explained the Desmosedici’s woeful steering and handling problems, because engineers were unable to put the engine in the right place. Then Honda revealed that its RC213V also uses a 90-degree vee. The answer for both factories was to rotate the engine slightly backwards in the frame to create more space for the chassis designers to do their job, but still, there’s no doubt that the M1 can use more corner speed than its main rivals.

However, an inline-four engine is wider, which is probably its greatest weakness, especially considering MotoGP’s current technical rules.

A longer crankshaft should make the bike harder to turn, although Yamaha and Suzuki fix this issue by concentrating mass in the centre of the crank, around the middle cylinders.

The problem now is that MotoGP’s control software and Michelin tyres make it more complicated than ever to find braking stability, grip, turning and traction.

Might this be why Yamaha’s results have collapsed since the change of technical regulations in 2016? In 2015, the last year of high-tech factory software and Bridgestone tyres, Yamaha won 11 races. In the two and a half seasons since then, the company has won 10 races.

Since the middle of last season Rossi and Maverick Viñales have blamed the M1’s failure to win races on one performance factor: software set-up.

But last month in Austria, where Rossi came home a distant sixth he wondered, for the first time, if the engine itself was the culprit.

The next round was different. Rossi and Viñales were both very fast in British GP practice because Silverstone is a handling track, not a stop-and-go track like the Red Bull Ring or Misano, where the big thing is getting the engine and electronics to put the power to the ground when exiting low-speed corners.

Why have the current technical rules changed everything? For many reasons, but in this particular case, we’re going to examine the importance of crankshaft mass and inertia.

With braking stability, grip, turning and traction at a premium it is vital to have the correct crankshaft mass and inertia.

A heavier crank gives better traction, because it damps down the engine’s firing pulses, but the motorcycle won’t turn so well, because a crank spinning at 16,000rpm wants to go straight, not around a corner. A lighter crank makes the bike turn better and behave better on the brakes but won’t offer great corner-exit traction.

Over the past four seasons three major manufacturers have got their crankshaft mass/inertia wrong.

In 2015, Honda went too light on the RC213V’s crankshaft, presumably in search of more straightline speed, so the engine picked up revs too quickly, causing wheelspin. It also shut down too quickly on a closed throttle, causing corner-entry skids. With a better crankshaft, maybe Marc Márquez would’ve won the title (which would have saved a lot of bother!).

Yamaha is in a similar fix now, with the engine spinning up too quick, causing traction and therefore acceleration problems.

Suzuki had similar problems in both 2016 and 2017. In 2016, when Viñales won the British GP on the GSX-RR, the crankshaft was slightly too light, causing too much spin at tighter racetracks.

Last year Suzuki built a heavier crank, so the bike was unstable on the brakes and wouldn’t turn. When the factory allowed Andrea Iannone to try the 2016 engine during a midseason test, the Italian told them they might as well give up there and then. Suzuki had no concessions last year, so it couldn’t revert to its 2016 engine, because its seven engines per rider were all sealed at the start of the season, just like those of Honda, Ducati and Yamaha.

And here is the big deal: Over the past few seasons Dorna has worked very hard to make MotoGP closer and more exciting. Its revised technical regulations have worked wonders, creating the closest top 10 (at Brno) and the closest top 15 (at Assen) in 70 years of motorcycle Grand Prix racing.

But could Dorna’s engine-sealing regulations be changed to further improve the racing? The current system of making the leading manufacturers seal all their engines in Qatar can take a factory out of the championship fight for the whole season.

Currently, each rider is allowed seven pre-sealed engines for the full 19-race season, while the lesser factories with concessions can continue engine development during the championship and use nine. Could Dorna further improve the racing by allowing the leading factories to have one engine upgrade per season?

“To me, limiting the top factories to seven engines per rider is enough of a limit,” says Suzuki team manager Davide Brivio. “I think a good compromise would be one upgrade a year. Every factory makes mistakes – a few years ago it was Honda, last year it was Suzuki, this year it’s Yamaha.

“The big issue is that the factories have to build and seal all seven engines for the first race in mid-March, which means they have to order all the engine parts three months earlier, so effectively factories must decide their engine spec at the end of November, after the Jerez tests. So you have to make your decision after the tests at Jerez and Valencia, which are run on a cold track, maybe with some rain, so not in ideal conditions.”

Perhaps it’s no surprise that Suzuki and Yamaha believe one engine upgrade per season might be the way forward. And perhaps this is where we find the real advantage of a V4 in modern-day MotoGP, because it’s doubtful if there’s any other day-and-night advantage.

Ducati, Honda and KTM all use external flywheels on their V4 engines, so they can change flywheel mass and inertia to improve braking stability, grip, turning and traction without breaking their engine seals.

Neither Suzuki or Yamaha use external flywheels because they simply don’t have the room – their engines would be too wide, causing ground-clearance problems.

If Yamaha could have fixed its crankshaft mass/inertia problems with an upgrade after the first few Grands Prix, perhaps this year’s championship would be even better, with Rossi and Viñales in the mix. Because, right now, the punishment for getting your engine spec slightly wrong in the middle of winter is surely too much. You choose the wrong crankshaft mass in late November and you’re still paying for your mistake 11 and a half months later.

Perhaps Yamaha and Suzuki will switch to V4 engines (even though that would hurt their marketing campaigns with their R1 and GSX-R road bikes) so that they can play around with crankshaft mass. But it would be sad if MotoGP went all V4; the class is already too homogenised.

MotoGP technical chief Danny Aldridge has already indicated he would be happy to change the engine-sealing rule, so long as the MSMA agree. “It’s up to them,” he says.

As for the answer to the first question: would a V4 YZR-M1 make the difference for Yamaha? I don’t think so. The factory simply needs to learn from its recent mistakes.