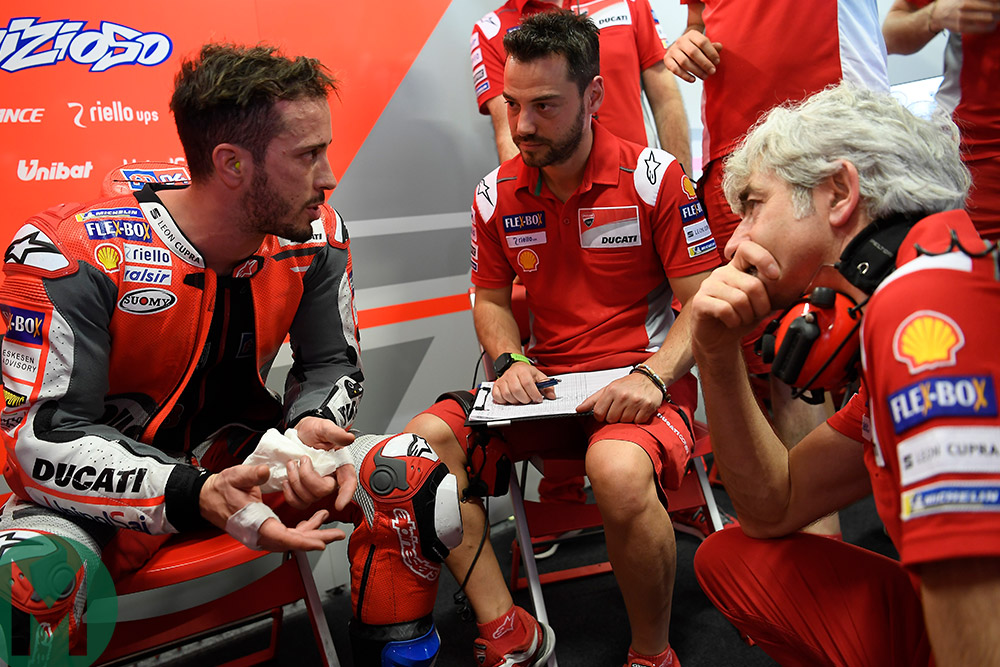 Since the summer break Andrea Dovizioso has been the strongest rider in MotoGP, with two wins and one third place finish. His Misano victory moved him into second overall. The title is a long shot but not entirely out of range for the Italian and his crew chief Alberto Giribuola (above with Ducati general manager Gigi Dall’Igna). Andrea and Alberto, who have worked together since 2016, comprise arguably the cleverest pitlane partnership in MotoGP. They challenged for last year’s title by understanding the bike/tyre combination better than most. This year it has taken them longer to build their challenge because a slight change in Michelin’s rear slick had them confused for the first half of the season.

I’ve loved bikes since I was six years old. When I was 10 we were on holiday on the Adriatic coast and I saw a minimoto track, so I had to have a go! From then my dream was to be a rider, but there was no opportunity to grow up as a rider around Turin. I wanted to do something like the Aprilia Challenge, but we didn’t have enough money, so my father said, ‘go study!’

To understand what your rider needs, you must be like him, think like him and understand his riding style. If you only use science you won’t find the best way.

What did you study to get into racing?

I did three years learning electronics at Turin University, the final two years focused on mechatronics. It’s a mixture of mechanics and electronics, so more and more people are studying it because most mechanical things are electronically controlled.

In my first years in racing I was a data engineer at Pramac with Niccolò Canepa, Aleix Espargaró and Randy de Puniet. My dream was to be a crew chief, so I moved to Ducati’s World Superbike programme working with Jakub Smrž. When Andrea arrived at Ducati at the end of 2012 his team needed a data engineer to work with his crew chief Christian Pupulin, so I worked with them in 2013 and 2014. When Gigi Dall’Igna arrived he moved me to Pramac, working as team technical coordinator. This helped increase my experience because I had to manage the set-up of both riders – Danilo Petrucci and Yonny Hernández – by helping their crew chiefs, while also looking after spare parts and so on. I learned a lot about everything, so by the time I became Andrea’s crew chief in 2016 I had done a bit of everything.

What’s it like being a crew chief in MotoGP?

There’s a big difference between being an electronics engineer and a crew chief. The electronics guy has a lot of exact numbers, so he tries to reach the right numbers for rear wheelspin and so on that give maximum performance, but the rider’s feeling may be completely different. To understand what your rider needs, you must be like him, think like him and understand his riding style. If you only use science you won’t find the best way. In car racing you can simulate everything, but with bikes it’s more about the sensation.

But your electronics background helps?

It’s good that I studied mechatronics because when we have problems I can speak with our electronics guys and understand. The thing is not to think of the bike and the electronics separately. For example, if Andrea says he has too much wheelie we can fit a longer swingarm and the electronics guys can take out some power, so we’ve made two steps in the same direction, which is wrong. So it’s step by step, 50/50, mechanics and electronics.

I often go to his house – he’s only 20km from me in Ravenna – have a coffee and watch the races and practice sessions. We look at everything. Sometimes I say, ‘you aren’t leaning off the bike enough!’ Many riders have changed their riding position in recent years but it’s not easy to change the way you’ve ridden all your life.

The rider/crew chief relationship grows up race by race. At the beginning, for sure, Andrea wasn’t sure I was a good crew chief because I was young. But from the first tests of 2016 we understood we could work together. We have similar minds and similar ages, which helps a lot. Now we are more similar compared to the first time we worked together, because I’ve become a bit like him and he’s become a bit like me. So it’s a bit like we are one brain!

Of course, this depends on each rider: some riders only want a working relationship but for Andrea it’s good to have a friend inside the box because if something goes wrong we can talk about it in a very relaxed way. Now he trusts me when I tell him he made a mistake. My job is probably 50 per cent psychological, because if I say we need to make a change to the bike he needs to trust me.

How do you prepare for each race?

After every race we check the data and understand something new. We try to have a normal programme of work at all the races. We adjust the bike track by track, depending on the problems, but I don’t like to make big changes between sessions because it’s easy to lose your way. The Ducati is very good in braking and acceleration, but the best improvement we made last year was discovering a good base setting that worked well at every circuit. This made it easy to get ready for each race. When you don’t have a good base setting you have to modify the bike at one track and then you can be completely wrong at the next track.

Andrea made his big breakthrough last year, how come?

Last year we discovered a good compromise from Jerez, so the bike stayed quite similar at other tracks. A good compromise for Andrea allows him to brake very hard and then lose the rear end in a controlled way, so he can enter the corner with the rear sliding a little to help him turn. Finding the way to enter the corner sliding the rear fixes the Ducati’s biggest problem, which is turning. We discovered we could gain a lot in the first part of the corner, which can make the difference.

In other words, his stop-and-go technique suits the Ducati?

Andrea’s style isn’t the best for corner speed, which is why tracks like Phillip Island and Termas aren’t good for him, but his style is good for tyre consumption because if you stay on the edge of the tyres for a long time then you consume the tyre. I think this is Yamaha’s biggest problem – they use long lines through the corner with a lot of lean, so they really use the tyres. 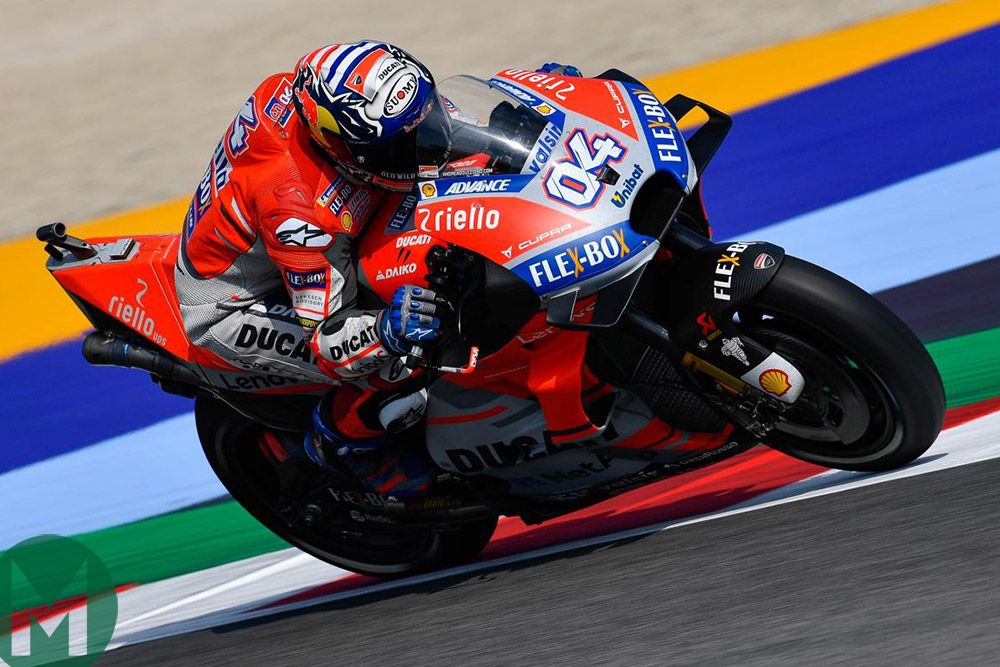 How do you manage the Michelins?

Everything has changed since MotoGP changed tyres. With Bridgestone you were always pretty sure what would happen and the riders could push 100 per cent from beginning to end, but with Michelins they cannot push all the way. Plus, the tyres change according to how the track and the temperature change during a race, so it’s very complicated.

With the Michelins you have to study the tyres a lot more over the weekend and you have to understand many things. Like in Austria last year we used a medium rear for qualifying and a soft for the race. Everyone thought we were crazy, but we understood that, with the temperature in qualifying, the medium would be better.

The situation was similar in Barcelona last year. Everyone had a big problem with tyre consumption. In qualifying we were one second off the pace, but after FP4 we understood that we had a chance to win the race because we had a setting that was good for the tyre, not so much for the lap time. We concentrated on saving the tyre for the whole race, so Andrea could be consistent every lap, but at other tracks where tyre life isn’t a problem you can concentrate on keeping maximum speed all through the race.

And the switch to control software has changed things?

Yes, a lot. Before the control software it was like PlayStation for the riders, but now they really have to play with the throttle. It’s good because a good rider can make the difference.

What are Andrea’s secrets to success?

Andrea is very controlled, but he really wants to win. The only difference between him and most of the others is that he just wants to be a normal guy. He doesn’t think he’s Superman; he just thinks he’s very good at riding bikes. He uses his brain a lot and doesn’t want to take too many risks when it’s not necessary.