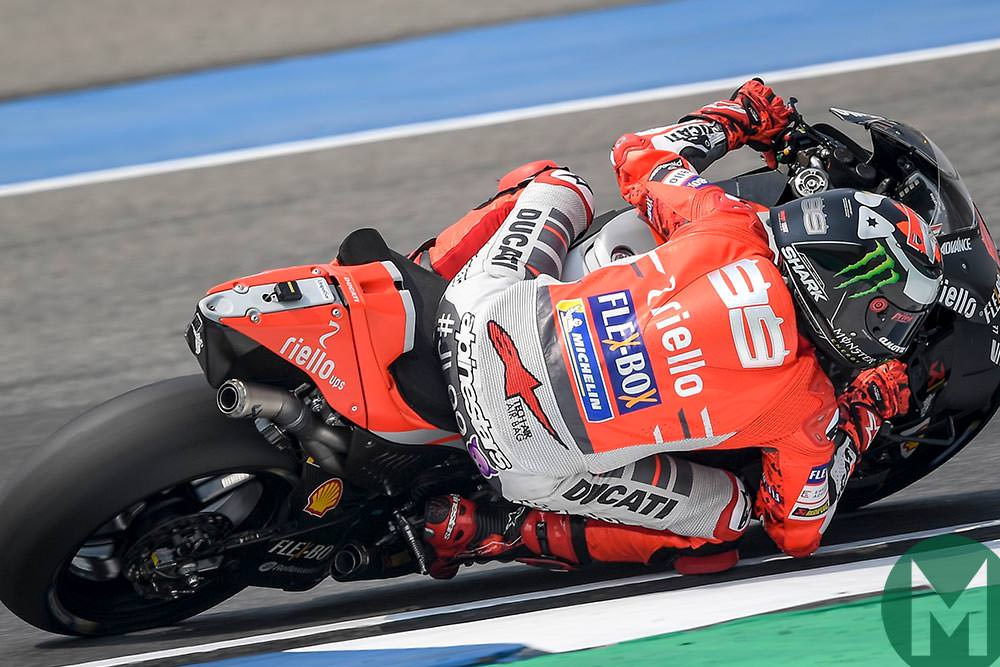 Look at this photo of Jorge Lorenzo riding through a right-hander during preseason testing. He’s at the apex, or thereabouts, with his knee on the asphalt and his elbow almost kissing the kerb. He is already looking out of the corner, working hard to turn the bike as quickly as possible, so he can segue into the acceleration phase. Now look at his left thumb: he’s at pretty much full lean, but the thumb is operating the rear brake via a custom-made thumb-brake lever.

Most of us would crash if we used the rear brake in the middle of a corner, but the brake is an essential cornering tool for most top racers, who use it in many ways that everyday motorcyclists don’t.

Ducati MotoGP riders use the rear brake more than anyone, so much so that the factory’s top riders – Lorenzo, Danilo Petrucci and championship leader Andrea Dovizioso – can operate the rear brake in two ways, via a thumb lever and a foot lever.

Many other MotoGP riders – Marc Márquez, Valentino Rossi, Maverick Viñales and others – have also experimented with a thumb-operated rear brake but currently race without. Obviously it’s a big ask to re-educate the brain into braking with the left thumb instead of the right foot; a bit like switching the throttle to the left handlebar.

It’s no coincidence that Ducati’s fastest riders have taken the time to re-educate themselves into using a thumb lever, because the Desmosedici needs all the help it can get to turn, but Dovizioso and the others can’t reach the foot lever when they’re riding through right-handers at 60deg of lean.

In fact Ducati riders use the rear brake all the way through a corner, during the braking, turning and acceleration phases, totalling more than two-thirds of each lap. And Lorenzo was using the brake so hard in Qatar that his GP18’s rear disc glowed in the dark.

This trick works on any motorcycle, but as Petrucci says, “without the rear brake it’s quite impossible to use the Ducati.”

It’s the same on the corner exit. Riders use the brake when they get on the gas to calm the rear end and prevent suspension pump. Then they use the brake to minimise wheelies during acceleration. Once again a thumb brake makes sense here, because the rider needs the balls of his feet on the footpegs to improve control, so his right foot can’t get to the brake lever.

Nowadays there’s another reason the thumb brake makes sense – most riders dangle a leg while braking into corners, so the right foot is nowhere near the foot lever entering right-handers.

It is almost exactly 25 years ago since Mick Doohan first used a thumb brake, which he had custom-made by Italian brake manufacturer Brembo, because he was unable to use the foot lever following the terrible right leg and ankle injuries he suffered in 1992. Doohan’s first race with the special brake was the Japanese Grand Prix at Suzuka on 18th April 1993. He continued using the system to win five consecutive 500cc world titles from 1994.

Other riders, like Àlex Crivillé and Simon Crafar, followed suit because they saw the advantages to be gained in right-handers. Dovizioso was the first of the modern riders to adopt the thumb brake, halfway through 2016.

Brembo, which now equips the entire MotoGP grid, has two main types of thumb-brake systems – series and parallel – with plenty of room for detail variation between the two.

Ducati uses the series system, in which the thumb master cylinder operates a two-piston brake caliper via the rear master cylinder, so the rider cannot use the thumb and foot levers at the same time.

When Rossi and Viñales use a thumb brake they use the parallel system, in which the thumb master cylinder directly operates two pistons of a four-piston caliper, while the foot lever directly operates the other two pistons. The advantage of this system is that riders can use both levers at the same time. The disadvantage is the extra weight of the four-piston caliper.

Obviously, there’s a big difference in the amount of brake power pressure that can be applied via each lever, which is why most riders prefer to keep both levers. A thumb brake applies 10 bar, a foot brake applies 50 bar.

“We are working to further develop the thumb system, because it can have many ergonomic advantages for riders, which is why more and more riders are asking to use this kind of brake,” says Brembo engineer Davide Acerbis. “Dovizioso was the first of these new guys to use the thumb brake, because it makes the bike turn easier. Marc also tried the system, but he is a very sensitive rider and until we can supply a thumb brake that gives him the exact same feeling as the foot brake, he won’t like it. He last tried the thumb brake during the Valencia tests last November and we are now refining the system some more. We have thumb master cylinders of 14mm, 13mm and 11mm diameter, but we are working on a bigger master cylinder, which will offer more power with less pressure and less stroke. Every rider uses the brakes in his own way, so they all need something different in their braking set-up.”

Thumb brakes are also popular in Moto3, but not in Moto2. Several World Superbike riders use them and they’ve been adopted by some motocross riders. John McGuinness also uses a thumb brake, because the sustained high speeds at races like the Isle of Man TT make it difficult to reach the foot lever with his foot. Inevitably, thumb brakes are also becoming popular with superbike riders on the street.