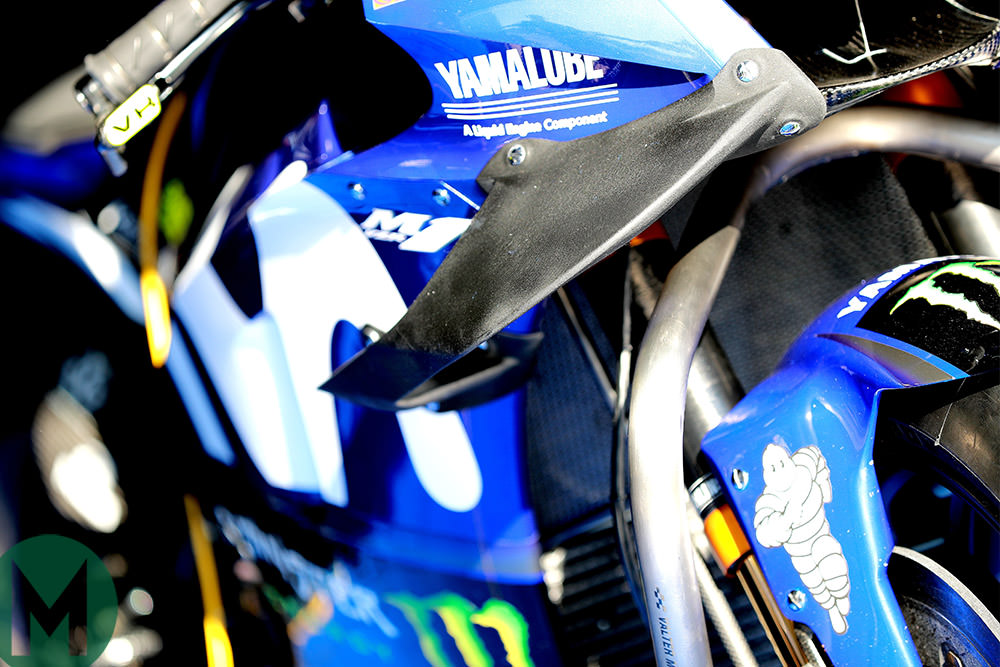 Aerodynamics has been MotoGP’s biggest tech talking point of the past few seasons, if only because it’s easier to spot a redesigned winglet or aero surface than a rewritten traction-control map.

Perhaps not for much longer. It seems that most of the factories have had enough of MotoGP’s new-age aero – mainly because they think they are spending too much money for too little gain.

There are currently two reports being compiled: one by Dorna’s technical staff and the other by the MSMA (the Motorcycle Sport Manufacturers Association). Both may offer the same conclusion: to ban aerodynamics in its current form and return to the conventional bodywork of a few years ago, before Ducati got clever with its winglets. The main concern is cost – a lot of money can be spent on aero development, which is still very much a nebulous science in motorcycle racing.

“There will be two concepts on the table,” says MotoGP’s director of technology Corrado Cecchinelli. “Our concept is to improve the present regulations, with better wording and less subjective criteria, so that everyone knows exactly what shapes and dimensions are allowed. We also want to stop the abuse of the modular concept, which allows the clever factories to have one design from which they can remove various parts, so in the end they have one aero design with 10 different possibilities. This is one area in which we have failed to achieve our goal of cost reduction.

“The other concept comes from the MSMA and is more radical – to return to conventional bodywork with none of the aerodynamic shapes that some teams currently use. This concept will be difficult to put into words, but my understanding is that this has the support of the majority of the manufacturers.”

Of course, there’s no need to guess which factory wants to keep aerodynamics. Ducati has always led the way: first with small winglets, then with larger winglets and then with multiple winglets. And when winglets were banned at the end of 2016, Ducati was the first factory to race with radical aero bodywork, at Brno last August. At that point it seemed like MotoGP was entering a new era, with bikes that looked like nothing we had seen before. Some people loved MotoGP’s new look, others hated it.

The idea of winglets and aero has always been the same: to increase front downforce, to reduce wheelies during acceleration, and increase front-end contact at high speeds and through fast corners.

The importance of the anti-wheelie aspect increased significantly at the start of 2016 when Dorna introduced its control software which features a much lower-tech anti-wheelie programme. The new electronics are unable to control wheelies without dramatically reducing torque and therefore acceleration, so factories use the new aero to do the job instead.

Contact between the front tyre and the track is also important because a motorcycle obviously handles and steers better when both tyres are gripping the asphalt. Many riders report much-improved stability with aero devices fitted. And the higher the speed, the more this holds true. MotoGP bikes have so much torque that even at 200mph the front wheel barely skims the asphalt. You can imagine that this can cause catastrophic problems when the rider grabs the front brake. Aero devotees therefore insist that the extra downforce created by aerodynamic bodywork is a vital safety factor.

However, Cecchinelli isn’t so sure. “We see all the time that bikes without a lot of aero can win races, like [Andrea] Dovizioso in Qatar, [Cal] Crutchlow in Argentina and [Marc] Márquez here at Austin,” he adds. “Whatever happens with the regulations will depend on the MSMA. It’s a tricky subject. I think they can reduce the present aero shapes, or they can ban everything with, some smart wording and a good faith agreement.”

“We are not so much interested in removing all aerodynamic devices, but rather in making the bikes safe and controlling costs. Our ideal goal is not so much to have no aero devices, but there may be reasons to get rid of all aero, because it’s a very complicated area of development, where if the rules are very free you can invest a lot of money with a lot of uncertainty about the result, so maybe the manufacturers will come to an agreement to ban them. It’s an area of development where it’s difficult to design and even more difficult to effectively test the designs. Some MotoGP bikes have a lot of aero, some have very little and some have none, so you realise there’s uncertainty about the results.

“My own personal view is that if I were a manufacturer I would want to ban aero devices, because I think it’s a waste of money which has no relevance to road bike development. So I would want to save that money and use it for something better.”

Aerodynamics can have huge cost implications – just ask Formula 1 car engineers, who spend a lot of time working with CFD (computational fluid dynamics) software and in wind tunnels. MotoGP is at the very beginning of this process, so it’s impossible to guess where this avenue of development will take the sport. Ducati is MotoGP’s aero leader, but even Ducati’s vehicle-dynamics engineers are only scratching the surface of aero development. When they wind-tunnel test the Desmosedici – usually with a mannequin on board – they only evaluate the effect of aero in straight lines or thereabouts. They have yet to seriously investigate the effects of aero when the bike is leaning through a corner, when the rider is moving his body around and scraping a leg on the track, which obviously transforms the aerodynamics of the motorcycle.

Some people are worried that higher-tech aerodynamics could take MotoGP down the F1 car route, where downforce is everything, overtaking is difficult and the racing therefore suffers. MotoGP downforce seems an unlikely concept, because a motorcycle leans through a corner and grips the track via two tiny tyre contact patches, which is very different to how a car drives through a corner.

But never underestimate a genius who can think his or her way around a problem like no one else. Renowned F1 engineer John Barnard, who created F1’s first carbon-fibre composite chassis and its first semi-automatic gearbox, worked for the Team Roberts MotoGP project a decade and a half ago, during which time he had plenty of clever ideas, none of which really worked, possibly due to budget constraints. But he was already thinking about how to gain an advantage through cornering aerodynamics.

“Aerodynamics at full lean is interesting,” he told me at the time. “Because when you are talking about 60 degrees of lean angle you have got a lot of fairing that’s close to the ground. So what’s that doing? Or, more to the point, what could it do?”

This is another reason Cecchinelli foresees an aero-free MotoGP future. Ever-increasing cornering performance and straight-line performance is unsustainable if MotoGP is to continue racing at many of its current venues. It is therefore Cecchinelli’s job to keep performance under control, which in the long term means keeping a lid on acceleration, top speed and cornering potential. If reducing or banning aero can achieve any of those goals, then it’s something he will have to consider.

Once Dorna and the MSMA have completed their reports a series of paddock meetings will be arranged that will surely be heated in the extreme. Ducati Corse MotoGP director Gigi Dall’Igna – the paddock’s prime aero advocate – is still smarting from the wings ban, which he believes was simply his rivals ganging up on Ducati to reduce the advantage that his engineers had worked so hard to gain.

It is hard to see how all six manufacturers will agree on this subject, so as usual there will be raised voices and most likely plenty of horse-trading: if you agree to this proposal, we’ll help you with that other proposal. It is therefore impossible to guess how the rules will be rewritten and how MotoGP bikes will look in the future.

But race car aerodynamicist and bike racer Ali Rowland-Rouse believes it will be a great shame if MotoGP takes refuge in the past, with old-school fairings and no radical aero,

“If the ban goes ahead it will be a shame, because aerodynamics is another differentiator from World Superbike,” he says. “They just need to regulate it like in F1, like limiting teams to a maximum five days in wind tunnels and limiting CFD cluster usage. It all sounds a bit naïve – the factories won’t unlearn the effects they’ve already learned, so they will just design another way around the regulations.”