The Frenchman was a revelation during his rookie MotoGP season in 2017 and finished top non-factory rider last season – so how does he do it? 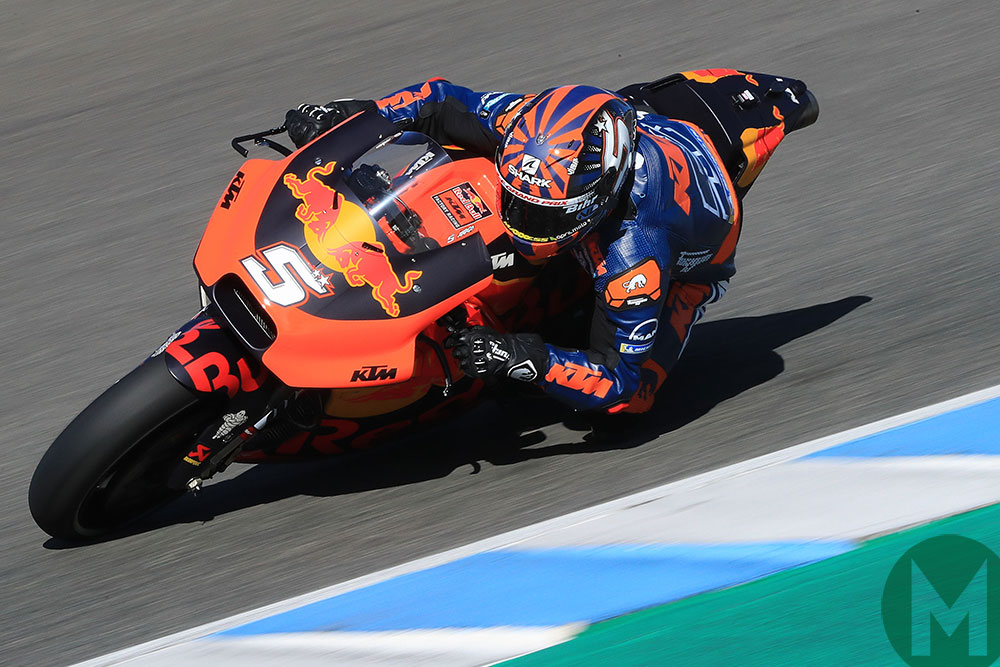 During 2017 and 2018 Johann Zarco made a habit of embarrassing factory riders aboard his second-hand Monster Tech 3 Yamaha YZR-M1.

The Frenchman seemed able to overcome technical deficiencies with a new way of riding which allowed him to get more performance out of his Michelin tyres. Last year he did drift into the doldrums after scoring two podiums from the first four races, then tumbling out of his home GP at Le Mans.

But he was back up to speed at the end of the season, taking a close third-place finish at Sepang, just behind factory riders Marc Márquez and Álex Rins.

This interview was conducted shortly after the two-time Moto2 world champion announced his move to KTM and therefore several months before his gruelling postseason debut on the Austrian V4.

Zarco talks well about riding a MotoGP bike, but he is one of those riders who doesn’t want to dig too deep, because he is worried that deconstructing his technique might leave him unable to put it back together when he’s on the bike.

You’ve said that Jorge Lorenzo has the perfect technique and you are very smooth on the motorcycle, so were you already thinking about MotoGP riding style when you were in Moto2?

Yes, I was watching MotoGP riders then, but I was also working on my feeling and comparing myself with other riders in Moto2. When I started riding a MotoGP bike I began to understand the category, the bike, the power, the electronics and the tyres, so I better understood how MotoGP riders can do the things they do, because sometimes when I was still doing Moto2 I saw them do things I wanted to do on a Moto2 bike, but you can’t do these things on a Moto2 bike.

It’s difficult because you are asking me things that I do naturally, so if I explain how I do it, maybe I cannot do it naturally anymore!

Why do you like to be smooth on the bike?

Your crew chief Guy Coulon says you use a different geometry and suspension set-up to Yamaha’s other riders, to make the bike pitch more and turn better…

I don’t know, I let my technician do this job. I ride the bike and I give my comments to Guy – maybe the bike isn’t turning as I want, maybe it’s difficult to stop or maybe I’m not getting good drive for acceleration. I give them that information, then they adjust the bike in a certain way and the more I say it’s better the more they see what I want from the bike.

Yes, first I try to feel confident with the front tyre, then once I’ve got full confidence there I start working on my drive out of the corner. 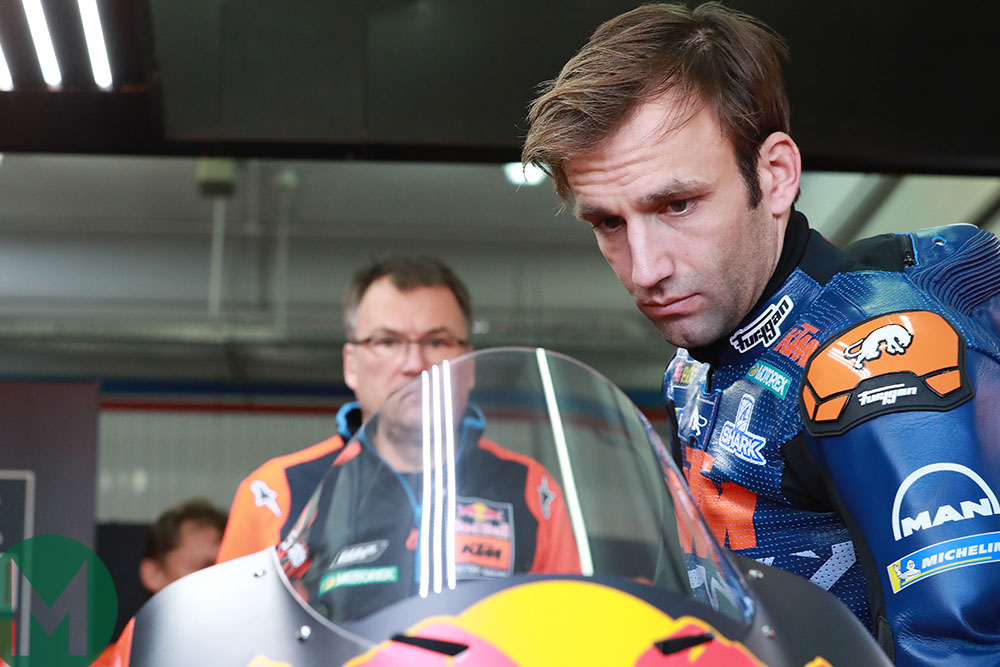 What kind of feedback do you get from the Michelin front and how much do you slide the front tyre?

What I like is when you slide the front tyre and you don’t crash. The tyre warns you before you crash, so if it’s warning you and you keep pushing then for sure you will crash, but if you slow down a bit and take some load off the tyre then you’re still on bike. The feedback from the tyre has changed since I first came to MotoGP. The feeling with the tyre is more constant now, so I slide less than before.

How often do you lose the front during a race?

It’s difficult to say. It can be many times, but usually it’s just a few times.

When you ride your supermoto bike what do you learn?

I’ve been training with a supermoto bike for two years.

I use a 16-inch Michelin front on the bike and I love this front tyre, it works so well on a supermoto bike. The tyre is quite soft, so you can’t do many laps with it, but during those few laps you get the closest feeling you can have to riding a MotoGP bike, so it’s good for learning.

I have to change the tyre many times, but at least I can push myself to the limit. You get great grip from the front, so you can get used to trying different lines to be faster and faster.

Is it an advantage that you never rode a MotoGP bike with Bridgestones and factory electronics?

For sure it’s an advantage. I hear riders saying things were better before, but for me what I have is the best I’ve ever had. So this is a huge help for the mind – to think that you have the best equipment.

How do you get the bike turning, because you don’t lean off a great deal?

I just use my style. I try to be clean with my lines and this helps me put the bike in the right direction. It’s difficult because you are asking me things that I do naturally, so if I explain how I do it, maybe I cannot do it naturally anymore!

So you’re worried about over-analysing the way you ride and breaking the spell?

Yes, I prefer to feel good on the bike and stay with that.

What’s the most critical point of the corner?

For me the exit is the most difficult part of the corner, to find the best grip and get good drive.

This is the area where I sometimes struggle the most, also because the rear tyre is the element of your motorcycle that changes the most during a race. The tyre drops from the start to 15 laps and from there to 25 laps. You don’t have the same feeling, the perfect feeling all the way through the race, so you must adapt. When you brake, enter the corner and use your corner speed, it’s almost the same feeling with new or used tyres, but still I need to adapt quicker when the rear tyre drops.

I need to understand what I need at that point and ask the team.

How do you pick up the bike for the exit – body weight, footpegs or what?

I use my body weight more to lift up the bike, but sometimes by doing that you are leaning off the bike too much and that makes the bike unstable. The best way is to pick up the bike quickly, but stay on the bike and use the weight of your body to keep the front tyre in contact with the ground.

Do you play with the throttle a lot?

How much do you use the rear brake?

So you turn the bike with corner speed, not with the rear brake…

Exactly. I don’t use the rear brake to turn the bike because it’s not where I’m losing time.

Do you think about saving the rear tyre from the first lap of a race?

The first thing I think about is going fast, much more than saving the tyre! Once you get the right feeling in practice that’s when you work at saving the tyre. My main problem is to be fast; it’s not saving the tyre, because I don’t usually heat the tyre too much, so if I can be fast I know I can have the chance to win.

Presumably it’s your smooth technique that stops the tyre overheating?

That’s maybe a reason. Otherwise I don’t know. Sometimes I have the feeling that I’m killing the tyre, but later my team tell me the tyre is still in good condition. Maybe it’s my style, the way I push on the footrests; it could be many things.

Do you look at [Valentino] Rossi’s and [Maverick] Viñales’ data?

I used to do that a lot, but not anymore; only if I have a big problem. We have our own base and we work on it, always thinking about the pace we need to win.

Presumably you watch the KTM and believe that it will work for you?

I hope so. My coach Laurent [Fellon, with whom he partially split shortly after this interview] stresses that they have a good bike and they can develop it a lot more. He trusts that if I get on the KTM I can push it to a good limit. I don’t think about it too much or analyse too much what they’re doing now and how their riders are on the bike. But I will see in November and maybe then I will get an answer.

Brad Binder: ‘I can’t ride a standard superbike — it’s got so many electronic aids’

Brad Binder talks riding technique – why MotoGP riders use less electronics, not more, how he locks the front tyre without crashing, why the leg dangle helps him tip into corners, why setting up a bike with downforce aero is so different and much more…