Marc Márquez’s Phillip Island victory was arguably his best so far; surviving that vicious six-rider brawl, then going on to win by almost two seconds. 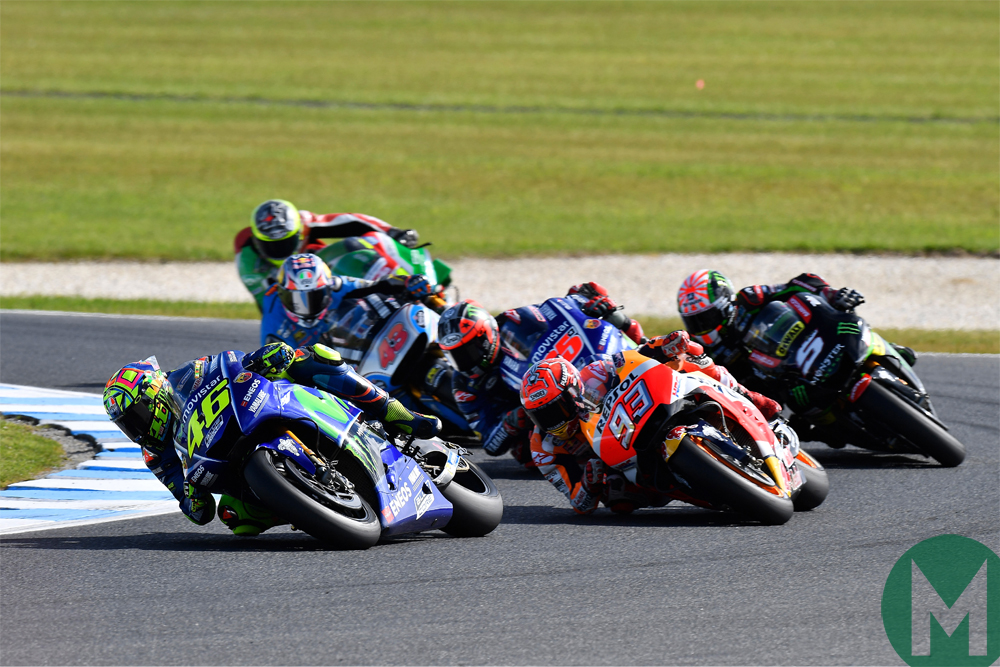 There must’ve been times in the early stages of that race when Marc Márquez must’ve thought he was waking up from a nightmare.

The previous weekend at Motegi he had fought wheel to wheel with Andrea Dovizioso, both men walking the line for five extra points. Situation normal: two rivals risking everything for the crown, each of them with as much to lose or gain as the other.

Phillip Island was the total opposite. For much of the race, Márquez found himself in the nightmarish position of being the only rider in the lead group with everything to lose, surrounded by rivals who mostly had nothing to lose. There’s no worse place to be if you’re chasing a title.

While Márquez absolutely needed to avoid an accident, Johann Zarco risked everything to get his first MotoGP win, Andrea Iannone tried for his first Suzuki podium by any means necessary, Jack Miller wanted a home MotoGP podium and Valentino Rossi wanted his first win since he broke his leg, or indeed as much as he ever wants a win. Maverick Viñales was the only other rider in the title fight, but only just, and he was out of it by the end of the race.

Márquez finished the 27 laps with the seat unit of his RC213V smashed by a divebombing Zarco and his leathers scuffed with rubber from rivals’ tyres. Whose rubber? Who knows? There was so much rubbing going on that the riders didn’t even know who had barged into them. They certainly didn’t have time to look back and check. Except Márquez, who several times looked over his shoulder, searching for Dovizioso.

This was MotoGP at its best and at its scariest. In recent decades huge efforts have been made to make all forms of motor sport safer, but motorcycle racing can never be made safe like car racing. Plenty of those collisions during Sunday’s race could’ve turned into huge accidents because Phillip Island is so fast, but the best riders in the world are just as good as getting themselves out of danger as they are at getting themselves into it.

Although I’d never argue for more danger, the races that make my heart beat fastest happen at those tracks where the riders are fully aware of the consequences of getting it wrong. Which means the fastest old-school tracks, like Phillip Island and Mugello. Places like Valencia and Misano never get my heart beating that fast. I want to see riders teetering on the brink through third- and fourth-gear corners, their bikes shimmering and shaking beneath them, not fiddling their way through chicanes and hairpins.

There was plenty of talk about danger, risk and aggressive riding in Sunday’s post-race press conference. And despite the numerous missile-like attacks undertaken by Iannone and Zarco, the winner and second-placed Rossi seemed happy enough; after all, they’ve both done a bit (okay, a lot) of divebombing themselves.

Related: “You release the brakes and believe”

Rossi, who has already criticised Zarco this season, admitted that the battle had at times been dangerous. “You can get angry but it doesn’t change anything,” he shrugged. “This is the game; it’s like this. It’s a bit dangerous, but this is the way. If not, you have to stay at home.” Can’t say fairer than that.

The race got so nasty at times that Marco Simoncelli’s words – “during the race you want to kill the other riders” – came to mind. You can be sure that all those involved will have little acts of revenge already planned for future use.

After the race, someone asked Márquez if he thought any of his rivals had overstepped the limit. The pot resisted the temptation to call the kettle black. “Today was normal,” he said. “It was aggressive, with some contacts, but this is racing. If we go down with the limits [make the rules tighter] then the racing will become like Formula 1. This is why MotoGP is getting bigger.”

There are those in car racing who think that Formula 1 doesn’t grab people the way it used to because it’s become too safe, including former F1 star Stirling Moss. “Motor racing should be dangerous!” says Moss, who spent the 1950s and 1960s happily risking his neck for all kinds of glamorous marques: Ferrari, Jaguar, Maserati, Aston Martin and Lotus. “You’re a young man and you want to show how brave you are.”

MotoGP has left behind many wonderful – and some very dangerous – racetracks, like Monza, Hockenheim and the Salzburgring. Phillip Island is now one of MotoGP’s last jewels in its crown. History has proven time and again that racetracks sketched out on the back of a napkin make for better racing that those laboriously configured on a computer.

I’ve only twice heard Márquez say he’s been worried while riding around on his Honda RC213V at 200 miles an hour. The first was at Silverstone a few years ago, when the combination of the track’s fast, bumpy corners and high winds had him a wee bit scared. The second was at Phillip Island last weekend, when he told us why the circuit is so special. “Because you’re riding with your balls up here!” he laughed, holding his throat.

Sunday’s win was arguably Márquez’s greatest so far, which is saying something for a man of 24 who isn’t far from surpassing the premier-class victory records of Mike Hailwood and Casey Stoner.

The youngster has it all: mountains of talent, an assassin’s aggression, the tactical nous of Napoleon and huge cojones. On Sunday he needed all those attributes turned up to 11. A few years ago it would’ve been Márquez doing the divebombing, this time he was probably the most controlled rider in the lead group, simultaneously attacking and defending, all the while saving something for later.

He didn’t get carried away in the early laps while his tyres got up to temperature, then he braved the storm while nursing his tyres and waiting for the right moment to make the break, because if he had gone too early he may not run out of tyre before the finish.

Márquez’s 35th win in the class of kings was a tactical masterpiece, not unlike Phillip Island two years ago. “I used the same strategy as 2015,” he said. “Try to be calm during the race, then attack at the end.”

And what of Dovizioso? Phillip Island is an awesome racetrack, dominated by gloriously fast, sweeping corners that make it a favourite of most riders. But on a cool spring day it can be an unpleasant place to play. Seven of its 12 corners are long, full-throttle lefts, which generate plenty of heat (often too much) in the left side of the tyres. But the right side of the tyres hardly get used, so in cool conditions the bike may feel iffy through right-handers. Of course, the rider can push harder through those corners to get some heat the tyres, but it’s so easy to overstep the mark.

Márquez and Dovizioso know all about that. Last year Márquez crashed out of the lead while braking into the turn four right-hander and in 2014 he crashed out of the lead while braking for the turn 10 right; which is exactly where Dovizioso went down on Saturday afternoon. The Italian isn’t someone who likes to push beyond the limit, so his confidence was gone. Braking into the turn-one right-hander on the second lap of the race he got it wrong again, ran wide and dropped from 11th to 20th.

Right-handers weren’t Dovizioso’s only problem. The ever-improving Ducati’s last major negative is mid-corner turning, which is magnified through Philip Island’s high-speed sweepers, costing him vitals hundredths in every corner.

Dovizioso isn’t yet out of the title race, but his mountain looks too high to climb. Whoever does win the crown will deserve it. If Márquez takes his fourth MotoGP title in five years there can be no doubt that he is the greatest rider in the world right now. If he stays healthy and keen over the next few years we may judge him as the greatest of all time.