Eighty-five riders raced at rain-lashed San Marino GP on Sunday, and there were 80 crashes. How does Márquez stay on, let alone win, in such conditions? 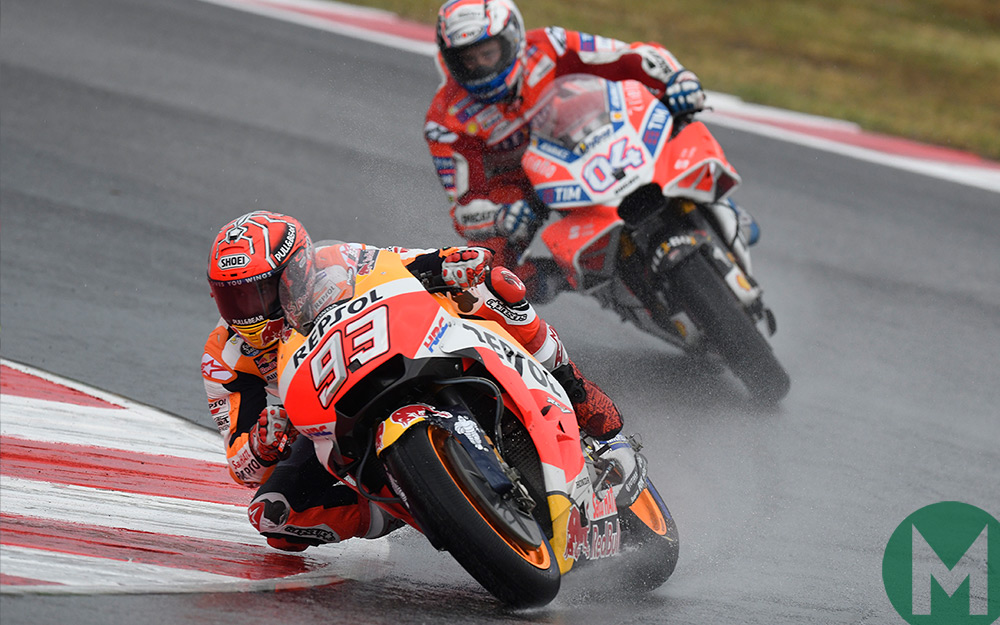 It was difficult to watch Sunday’s race without imagining a kind of Gollum conversation taking place inside Marc Márquez’s head between his risk-taking self and his risk-averse self (if he has such a thing).

However tiny Márquez’s risk-averse self might be, it was in charge for most of the 28 laps. He wisely decided to let Jorge Lorenzo go about his business and then just as wisely decided to stay behind Danilo Petrucci, allowing the Italian to set the pace. All this while his risk-taking inner beast was surely fighting to get out…

“No! Twenty points is better than none!”

“Let me out and let me at him! Twenty-five points is better than 20!”

This must have continued for at least half the race, because while Márquez knew he could not win the title on Sunday he certainly knew he could lose it. If he had crashed out he would be going to Aragón 29 points behind Andrea Dovizioso.

Nevertheless, Márquez’s inner beast did eventually get its way. The transformation was instant: the body language changed, his Repsol Honda started dancing around a bit more and Petrucci’s advantage shrank. Márquez had done the sums and he had decided it was worth walking the line for those five extra points.

It’s the kind of nerve-wracking situation in which most championship hopefuls find themselves: looking for that uncomfortable middle ground between risking too much and crashing out and risking too little and scoring too few points.

The risks are magnified many times in the rain and at Misano they were magnified many times more. The track was ridiculously slippery, claiming an all-time record of 80 victims on race day. In those conditions it’s very difficult to find the limit without tripping over it, which is why so many riders were on the ground before they even knew they’d done anything wrong.

Inevitably, Márquez had more moments than anyone. He saved several monster front-end slides that would’ve taken out most normal mortals, or at least had them shutting the throttle and cruising to the chequered flag. So why doesn’t Márquez heed such warnings?

He does, of course, but in a different way. Márquez always rides like this: on a dry track, on a wet track, even on a skating rink, like Sunday. It’s the consequence of a life spent scrambling for grip on dirt-track ovals. He needs the motorcycle moving around, so that he can have a conversation with it. Each time it flicks this way or that his machine is talking to him, telling him something important. Often it tells him: that’s the limit, right there. But he doesn’t usually back down. Instead he works out how to creep up on the limit from a slightly different angle.

All riders have conversations with their motorcycles. It’s what riding bikes and racing bikes is all about: feeling the machine respond to your input and then reacting to that reaction. It’s just that Márquez’s communication with his bike is on another level; almost like he speaks a different language. He can understand what the bike is telling him and make the appropriate response in a fraction of the time it takes others. And that’s what makes him so special.

Márquez is contesting his 10th season in Grands Prix, but many people still believe that he wins by riding out of control and surviving through luck. Someone asked Andrea Dovizioso this very question at the previous race in Britain: how does he get away with it?

Dovizioso sighed before answering, no doubt surprised that this still needs explaining. “People still say Marc is out of control, but did you ever see him ride in a different way? One of Marc’s strong points is this: he can play with the limit. Not many riders can. Most of the time he is past the limit and he makes mistakes, but he has won a lot of titles, which means he can manage this situation. For sure, it’s difficult for Marc not to play with the limit, for him it’s normal; in fact he has to do this.”

Márquez crashed three times during practice, qualifying and warm-up at Misano – more than anyone else. But he won the race, while many riders who hadn’t fallen in practice crashed out. So who’s the clever guy?

Of course, crashing can be dangerous, but modern tracks and modern riding gear have made it much less dangerous. Márquez fully understands what he’s doing – he locates the limit in practice or warm-up, so he knows how far he can go in the race. The statistics come out clearly in his favour: he may have crashed 76 times during his 85 MotoGP weekends but he has won 33 MotoGP races and three world championships in four years. And he’s still only 24 years old.

Misano was a great victory for various reasons: because the conditions were so treacherous, because there was so much to lose and because he still had the front and rear tyres squirming into the last corner. It may even have been his greatest success.

Márquez certainly knew he had done something special. “When I crossed the line it was good that I didn’t have a microphone inside the helmet!” he laughed.

Come the final race of the season there will be many key moments to look back upon, but it’s just possible that Márquez scored his most valuable win of the year on Sunday.