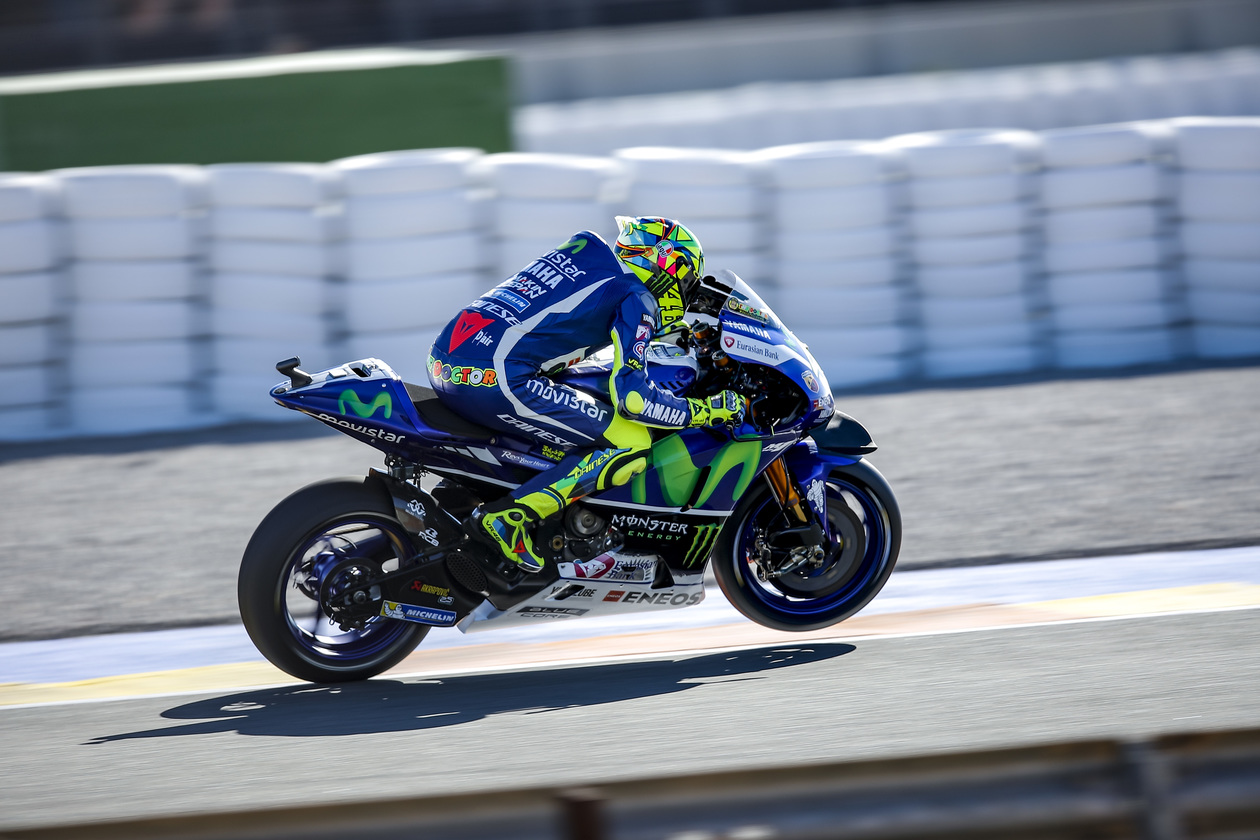 Why were winglets such a big deal during the 2016 MotoGP season? Because the anti-wheelie program in Dorna’s unified software is the weakest of all the rider aids, so the downforce created by the wings helped keep down the front wheel during acceleration.

MotoGP bikes have so much torque (engineers mostly speak of torque, rather than horsepower) that they can lift the front wheel in any gear. And if the wheel lifts too far or too fast the rider must close the throttle, which obviously hurts acceleration. In the pre-2016 days of tailor-made factory electronics the anti-wheelie (AW for short) was very high-tech – the program didn’t even wait for the front wheel to lift before going into anti-wheelie mode. Sensors measured factors like acceleration of the front-suspension stroke to predict a wheelie, which told the ECU to close one or more of the throttle bodies. When the anti-wheelie was set up correctly it reduced torque just enough to avoid a big wheelie, without compromising acceleration too much.

Dorna wanted to get away from that. The concept of their unified software is safety, not performance. Traction control is a major safety issue but wheelies aren’t so much. That’s why Dorna’s AW is quite basic, with no wheelie prediction capability. Riders now rely much more on throttle control to find the best balance between too much wheelie and too little acceleration. 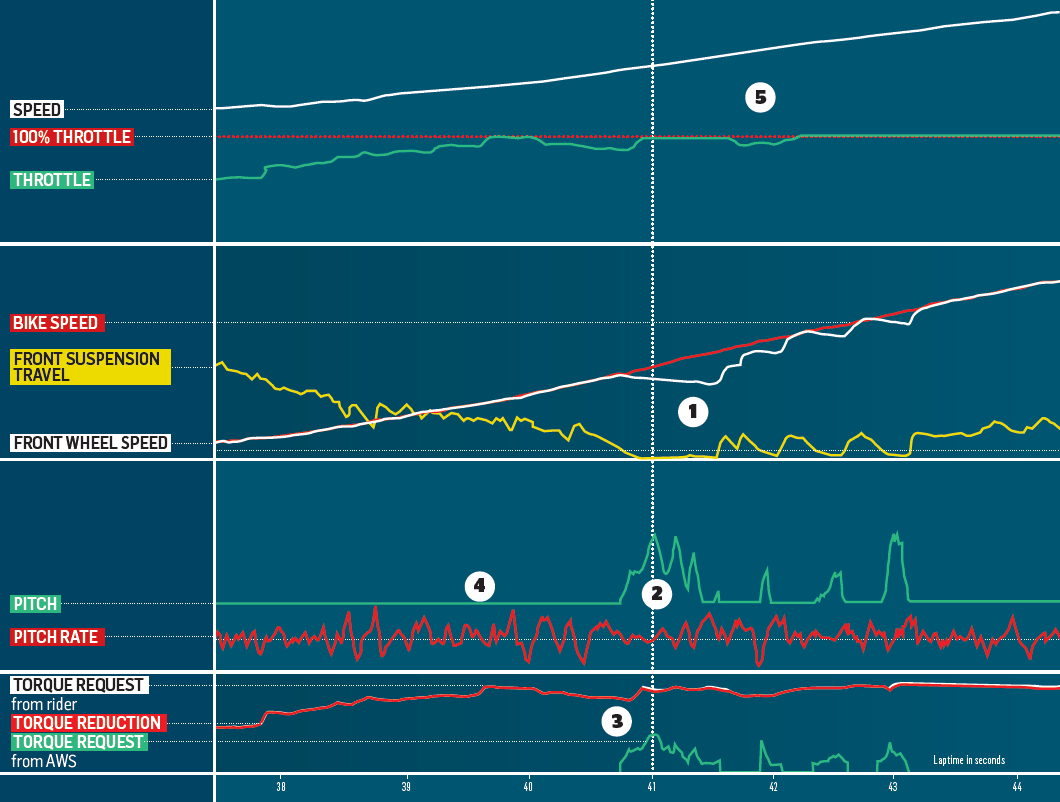 The above data graph shows a MotoGP rider (we don’t know who because that’s secret) accelerating out of Jerez’s turn five (Sito Pons corner), the third-gear right-hander that takes riders onto the back straight. Wheelies are a particular issue here because the track drops away quite suddenly.

The data marker (the white vertical dotted line, 41 seconds into the lap) is at the corner exit, with the rider already on full throttle and the front wheel is lifting off the ground. The anti-wheelie system is about to go to work.

To best understand the rainbow of squiggles, focus on the numbers, from one to five, and their accompanying captions below.

The bike is accelerating hard, shifting load to the rear and lifting the front wheel, which decelerates as it leaves the asphalt, so the white line drops below the red line. At the same time the front forks top out, making a zero value on the yellow line. These inputs tell the anti-wheelie system that the bike is in a wheelie situation. Here the difference between bike speed and front-wheel speed is about 20mph. On a longer wheelie the speed differential can reach 60mph.

Essentially, the anti-wheelie works in the same way as TCS to reduce torque delivery to the rear wheel. The white line shows the rider hard on the throttle as the front wheel lifts. The red line drops slightly beneath the white because the wheel-speed, fork-travel and pitch-rate sensors tell the AW to request less torque than the rider is requesting. The green line shows the reduction in torque as a result of the AW request.

Three smaller spikes in torque reduction follow over the next second and a half as the bike again lifts the front wheel, which is highlighted by the reduction in front-wheel speed (second section of graph) and the increase in pitch (third section).

AW reduces power much less than TCS because the bike is not in a danger situation. Exiting turn five the AW may take away 200 horsepower when the engine is producing 200.

Note that the pitch rate never remains at zero because the bike pitches and vibrates all the way around the racetrack.

The rider eases the throttle shut as a result of wheelspin and then the wheelie, which means he will lose time. This suggests that the rider’s electronics engineers haven’t got the program set up just right, so next time he’s in the garage his crew will put some new numbers into the AW map to reduce torque in this area, so he won’t need to close the throttle next time. 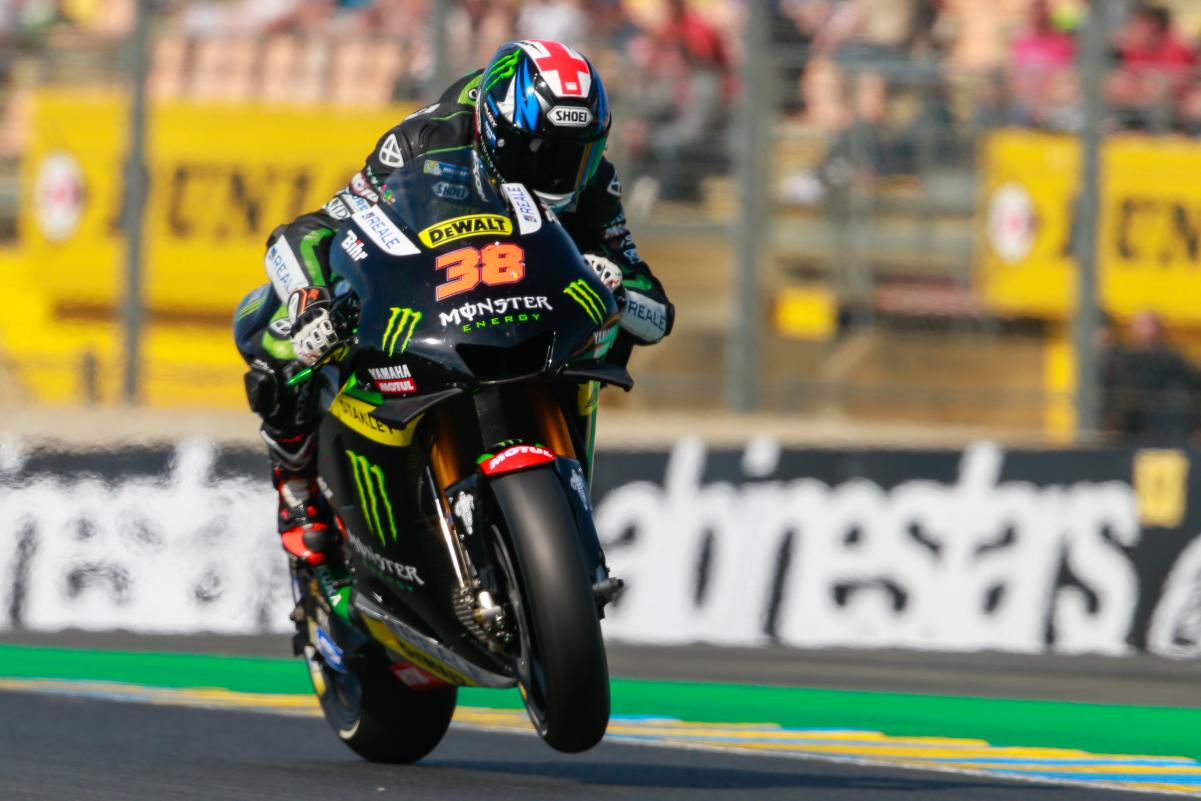 “The wheelie control is probably the biggest drop from 2015. Now it only works when we get to zero on fork travel. Before we could offset the wheelie control, so it would start working before the forks topped out. It knew the wheelie was coming, so it was a very progressive system and we had better hover with the front wheel. Now it waits for the forks to top out and then the butterflies cut all the power. In the end you have to roll off because the butterflies cut so much power, then open again and the front comes down and so on, so you’re better to hold it yourself with the throttle.

“What we can do to help the anti-wheelie is filter the power: we maybe start off with 60 per cent torque in third, then when I click fourth it goes to 75 per cent and so on, then when I get to a certain rpm it goes to full power.”