High-performance MotoGP engines create a lot of negative torque on the overrun. It is the EBC’s job to control how much gets to the rear wheel 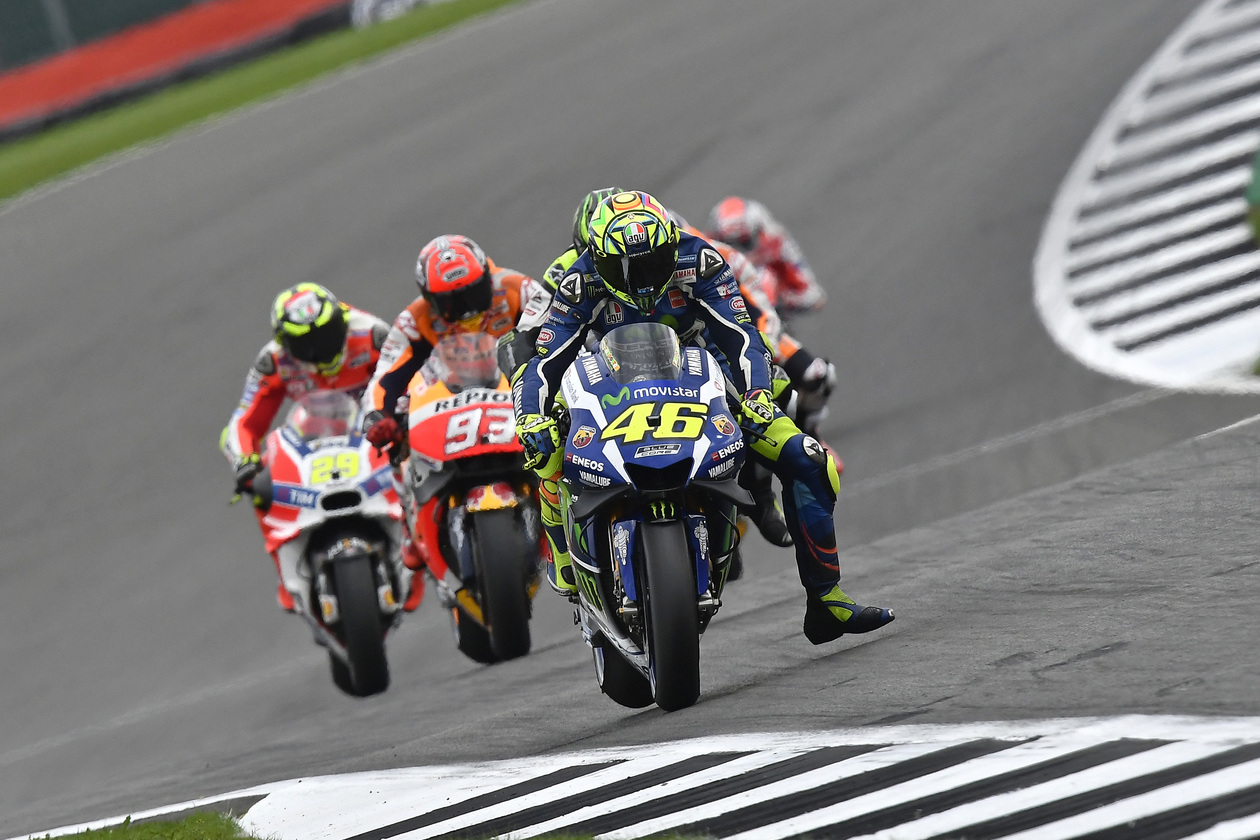 If you’ve been into MotoGP since the early days of 990cc four-strokes you will surely remember watching in delight as a rider braked hard with the rear wheel slewing this way and that, before flopping the bike into a corner.

These were the infant days of engine-braking control (EBC), when the hardware and software weren’t clever enough to reduce negative torque on the overrun, so the engine locked the rear wheel. The riders were left to cope with the consequences as best they could.

Over the next few years engine-braking control software improved dramatically, because generally the fastest way into a corner isn’t sideways, with the rear tyre hopping left and right – even if it looks great. All riders need some engine-braking to help them slow for a corner, but exactly how much depends on individual technique. Jorge Lorenzo likes to enter corners with both wheels perfectly in line, although someone like Marc Marquez prefers the rear wheel skewed just an inch or so out of line to aid turn-in. None of them want too much engine-braking for their riding style.

The toughest era for engine-braking control was a few years ago, when MotoGP regulations reduced fuel capacity to a ridiculously mean 20 litres. Engineers had to save fuel wherever they could to finish the race without having to reduce horsepower, so the obvious place to save fuel was during corner entry.

In their desperate efforts to save every last drop of fuel engineers often shut down too many cylinders, which might lock the rear wheel too aggressively and hurl the rider to the ground. Many bikes were trashed and many bones broken, all to save a few millilitres of fuel. Last year MotoGP fuel capacity was increased to 24 litres, so engineers no longer need worry so much about saving fuel. 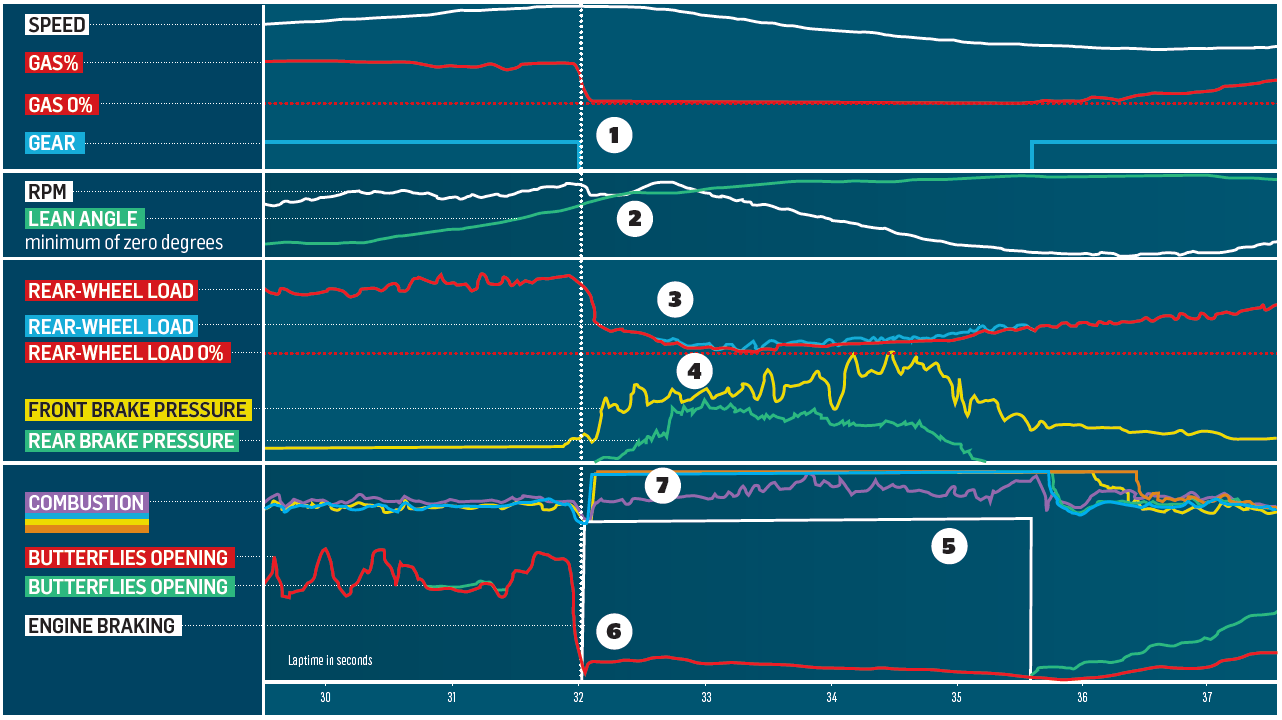 The above graph – definitely the maddest bunch of squiggles of all the MotoGP rider aids – shows a rider (we don’t know who) entering the turn five right-hander at Jerez (Sito Pons corner). The vertical data mark, 30 seconds into the lap, is the moment when the rider hits the brakes and shifts down to third gear, putting the ECU into engine-braking mode, using the engine to help slow the bike.

As always, try not to be fazed by the rainbow of squiggly lines. Focus on the numbers and related captions to make sense of it all.

The actions of the rider shutting the throttle and shifting down a gear puts the system into the engine-brake strategy.

The revs rise as the rider shifts from fourth to third, while lean angle reduces as the riders finishes the run out of the previous left-hander and lifts the bike upright for braking into turn five.

There are two lines showing load that have been filtered through the system in different ways. Most engineers take an average of the two, which in this case would be a minimum of around 30 kilos. Like everything, how much load is required on the rear wheel depends on the individual rider. For example, Marquez’s spectacular wheel-in-the-air braking technique obviously reduces load to zero at certain points during the braking phase.

The rider applies a lot of front brake, while using the rear brake more gradually. The spikiness of the lines is purely down to vibration, so the electronics engineer needs to take a smoother average curve from each line. Note that the rider is still using the front brake as the bike approaches full lean.

This horizontal line shows where the system enters EBC mode and then exits EBC mode as the rider reopens the throttle.

Red and green lines are each pair of throttle butterflies opening

The rider has fully shut the throttle and both pairs of throttle bodies have closed to provide negative torque to the amount calculated by rear-wheel load and other inputs. But although the rider has fully shut the throttle, neither pair of butterflies has fully closed, which keeps the rear wheel spinning to prevent it fully locking up. The butterflies close further as braking reduces and rear-wheel load increases until they are very nearly fully closed at the end of the EBC phase; all of this according to each rider’s preference. The throttle bodies on Marquez’s Honda probably close more than those on Lorenzo’s Yamaha, because Marquez likes to use the negative torque, possibly because that’s what he learned in Moto2 (which features no EBC), while Lorenzo likes to freewheel into turns, like he’s on a 250 two-stroke.

Red and green lines are the throttle butterflies. Yellow, blue, orange, purple lines are combustion on each cylinder

Throughout the EBC phase, three of the four lines showing individual Lambda rates (the combustion efficiency of each cylinder via air-fuel ratio) unite on fully lean. In other words, those three cylinders are receiving no fuel, so they’ve stopped firing, so the engine is almost stopped to provide negative torque. One cylinder keeps firing to prevent the rear wheel from locking, but the combustion of that cylinder gets leaner (and therefore weaker) as rear-wheel load increases to further increase engine braking. Once the rider reopens the throttle, each of the three ‘dead’ cylinders wakes up in turn, because if they all woke up together they would deliver too much of a hit to the rear tyre. 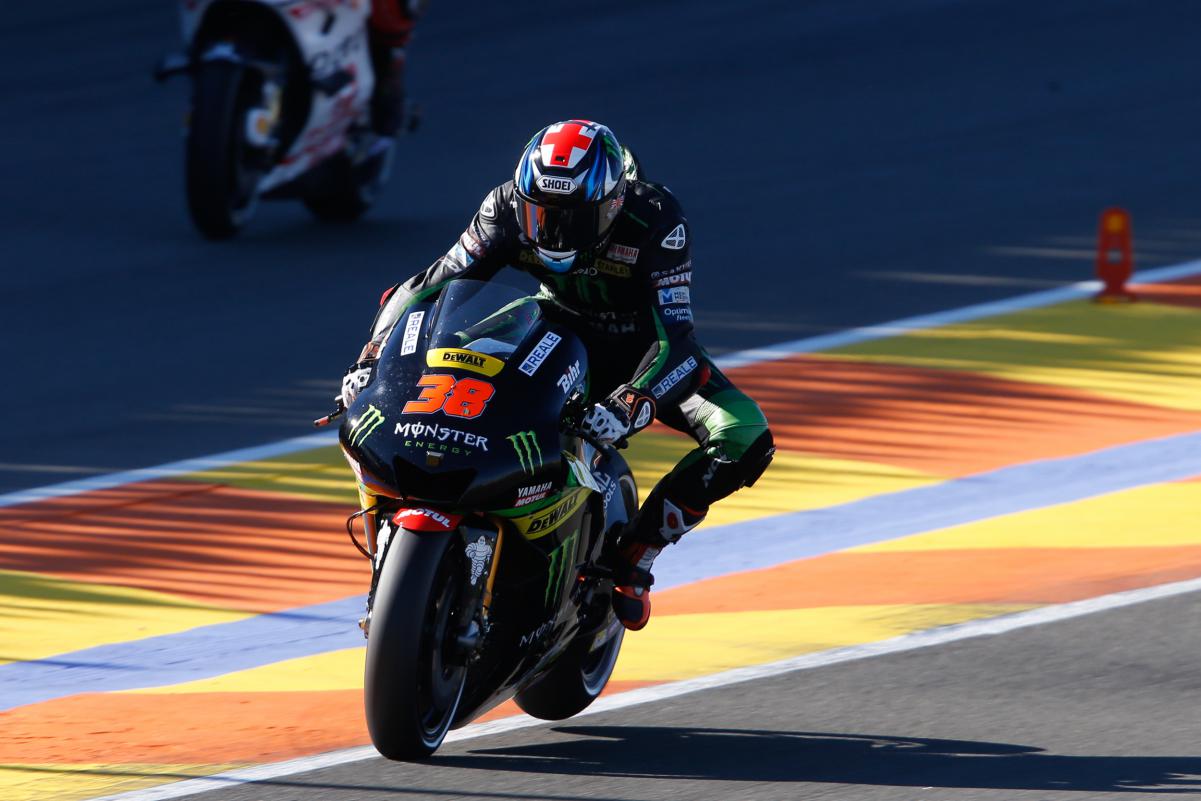 “Before the unified software we could change all kinds of variables – we had control over each of the four butterflies, so we could limit how each individual butterfly shut by putting numbers into the programme for every downshift, from sixth to second. With the unified software we have two and two – one pair of butterflies and the other – and we have to go off a much simpler formula of numbers, so we don’t have the same finesse of controlling the bike with engine-braking. So it’s a bit like everything else really – the rider now has to play around with the bike a lot more.”