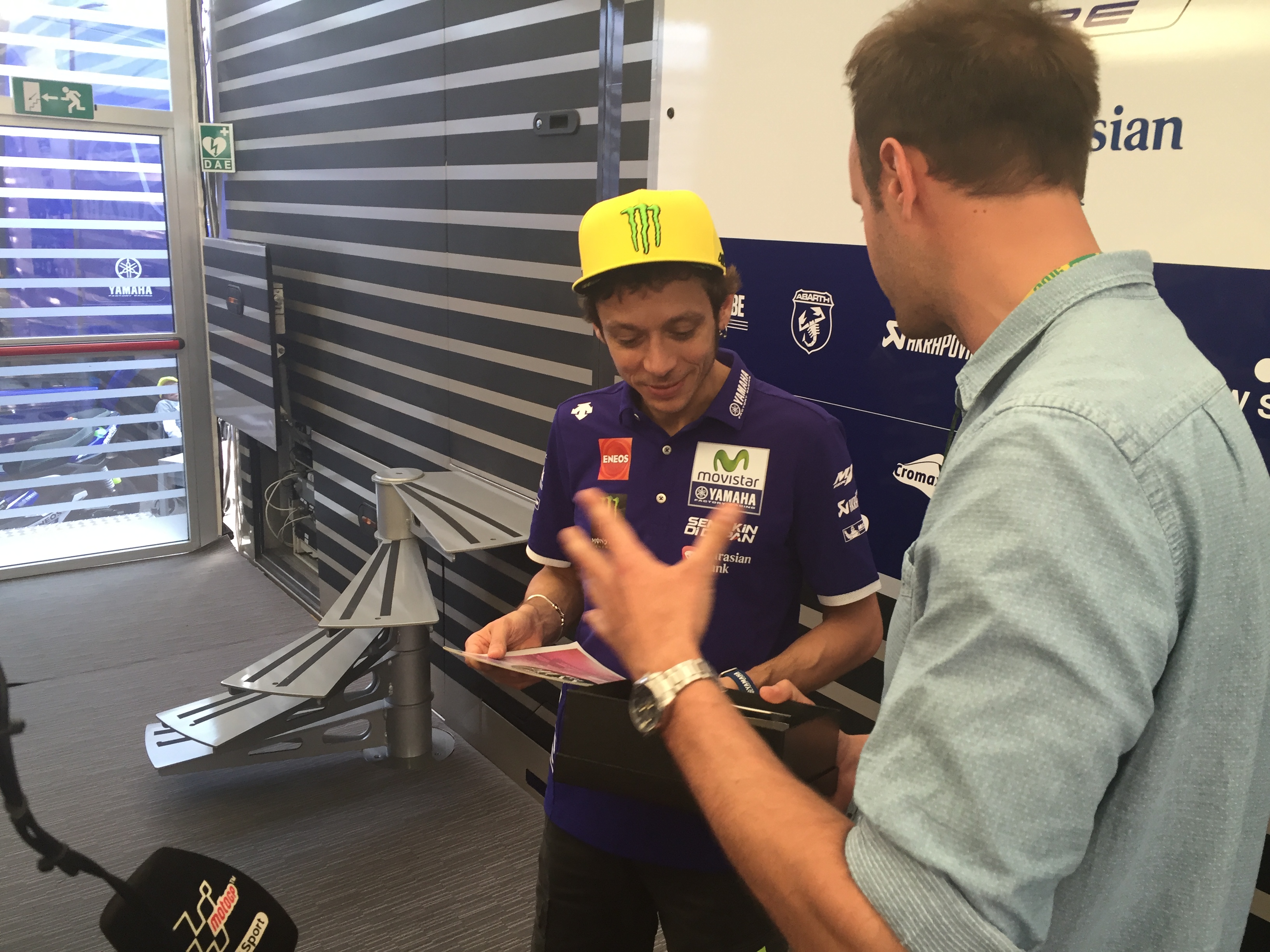 You want an interview with a nine-time Le Mans winner? No problem. How about a current Grand Prix driver? Slightly more difficult but not impossible. OK, can I present an award to Valentino Rossi? Umm… Good luck.

The final two words were the ones left lingering in the air when Damien Smith asked me to set up the Hall of Fame presentation to the nine-time champion. He couldn’t make the event on May 31 so it was off to a MotoGP event to film him accepting the award. Honestly, how hard could it be?

First of all you need to find a gap in Rossi’s diary. This is no ordinary diary. While most people have spare time dotted through a race weekend – especially if someone wants to present you with an award – Rossi does not. His free time is short. And expensive. While finding out the best way to pin him down we heard rumours of seven-figure sums in exchange for a few hours of work being turned down. The words used by the Yamaha press department to describe his schedule were “dramatically hectic”. Suffice to say, we weren’t hopeful.

First stop: Yamaha. Rossi is Yamaha’s Golden Goose and, unsurprisingly, it doesn’t want to tire the goose out to such an extent that it stops laying. How many new Yamahas are sold because of Valentino Rossi? I suggest few sportsmen/women have ever had such a bearing on what the public buys, especially when you look at the Italian market which, in 2012, sold 260,000 new motorcycles…

Some PRs are rubbish at replying to emails. Yamaha is usually very helpful, but this time it took a while to get anything out of them. No surprise, really, because while we were trying to book Rossi for five minutes Jorge Lorenzo decided it was a good idea to announce that he was moving to Ducati in 2017. Perfect timing, thanks Jorge.

The next challenge was how to film the presentation. ‘Take a camera!’ I hear you say. Of course, it could never be that easy. Because the MotoGP footage rights within the circuit confines are owned by Dorna we’d need their permission. We’d also need an accredited camera crew – enter BT Sport.

After an email conversation with Yamaha we finally nailed down a time at the Spanish Grand Prix in Jerez after Rossi’s media debrief on Friday evening. Bear in mind that this was received on April 20, the day before our (already-booked) flight left. Meanwhile negotiations were still on going with BT Sport and Dorna. Mat Oxley had greased all the wheels he could, but we’d need to wait and see what they said at the circuit on Friday morning. Mat knows the teams better than most, he’s also written Rossi’s biography (available here). If anyone could secure everything we needed it was him.

After getting to the circuit we organised a time to meet Dorna. Equipped with copies of the magazine and our most polite rhetoric we explained what we wanted to do. Dorna was more than understanding, said yes and even offered us some footage of Rossi’s 2015 season to play at the Hall of Fame. Thank you Dorna. 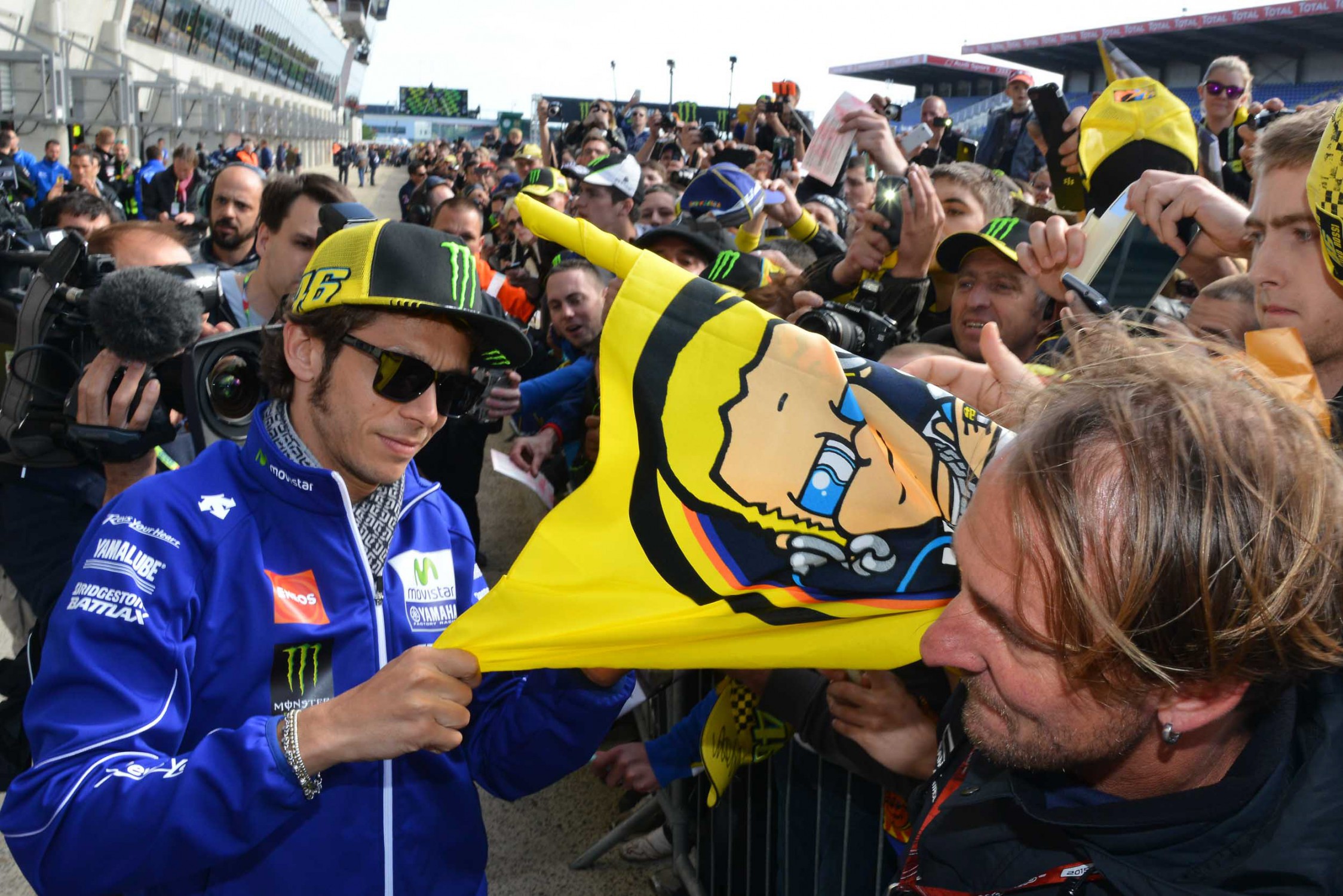 Our next appointment was with BT Sport, who we were going to meet at Marquez’s media debrief at 4pm. If they said no, we had no back-up plan. We eventually tracked down the TV trucks – when they didn’t show at Marquez’s debrief – and asked. “Absolutely,” was the reply. Thank you BT Sport. “Have you got permission from Dorna?”

“Umm… Well, we were given permission, but we don’t have anything written down.” Understandably BT Sport didn’t want to film something they weren’t allowed to, but we persuaded them to call Dorna and confirm. “If we don’t turn up,” they replied, “then you know why”. Great.

Rossi’s debrief was about to start and Yamaha asked if we could keep our interview afterwards to only three questions. “But you said we had 10 minutes?”

“OK, you can have four minutes…”

BT Sport did arrive, as promised, and the hour slowly approached. “Valentino likes to take a coffee after his debrief. Once he has done that you can present him with the award.”  Valentino’s coffee taking took quite some time. Soon we started to wonder if he was ever going to emerge from behind the hospitality unit’s temporary walls. Then suddenly “OK, OK, he is ready. Are you ready?”

Then nothing. More waiting. Three minutes later: “OK, he is ready. Are you ready?”

“Yes…” He does then emerge, all smiles, media hat on. I explain what we need and he immediately launches into his acceptance speech, no preparation, and no notes. One take later we follow him and the Yamaha PR team into the lorry to have our four-minute chat (below). This all goes according to plan, but at four minutes 19 seconds the Yamaha PR team steps in to try and stop things. You’ll hear Rossi say “Si, si…” as he indicates he’s good to continue. This has happened before and doesn’t come as a huge surprise. 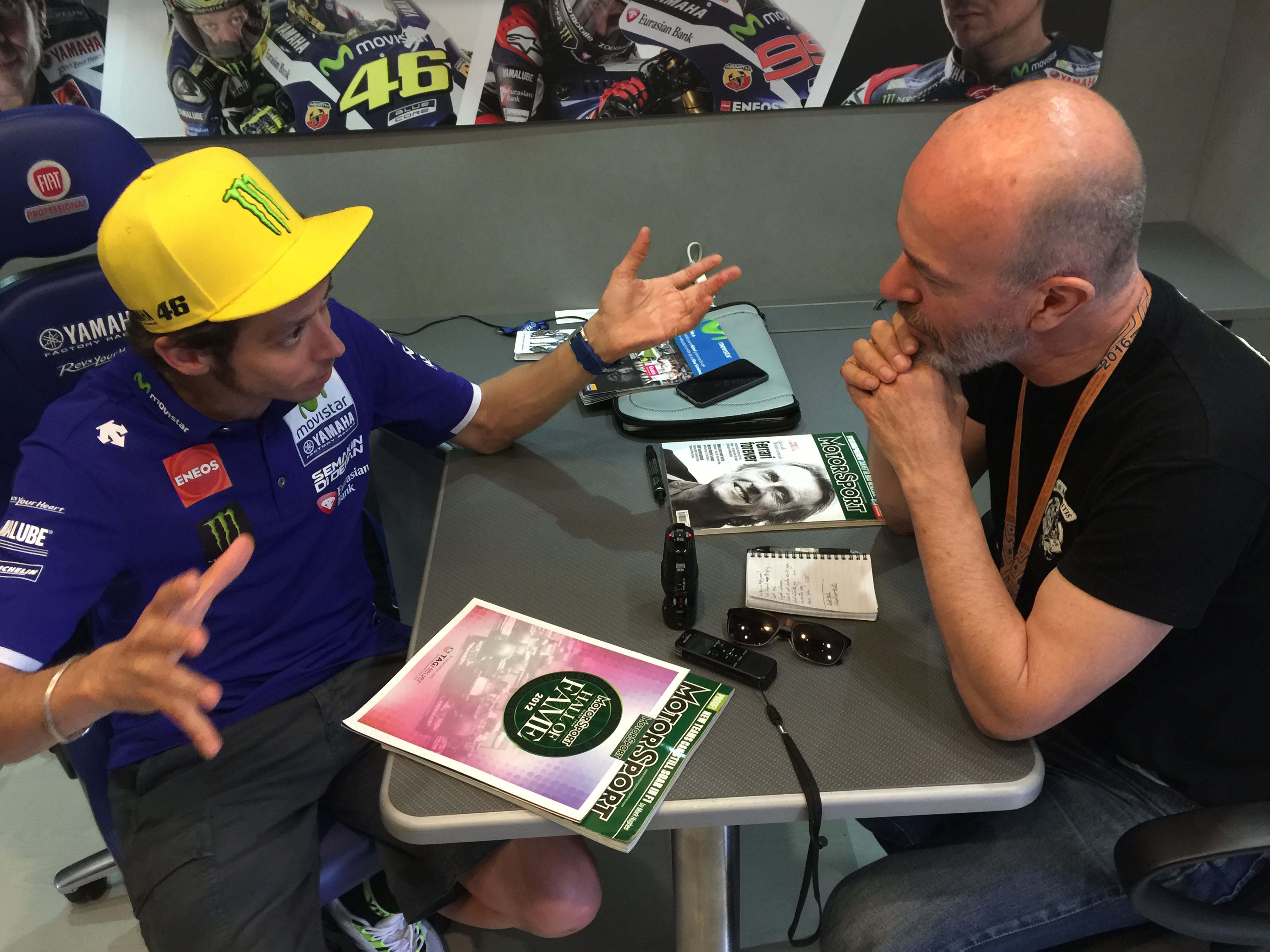 By 6pm we’re back out in the paddock and Rossi has already left for another engagement. We’d show you the video of his career highlights, but because of the TV rights we only had permission to play it once at the Hall of Fame. This is standard procedure in the modern, monetised world of sport. Indeed, we’ve had dealing with another major racing championship that wouldn’t think of offering a few seconds of footage without combining it with an invoice for several thousand quid. Dorna didn’t charge us a bean.

Rossi’s induction into the Motor Sport Hall of Fame is long overdue. It didn’t come without its hurdles, though.