Marc Márquez rewrote the history books this year, with big smears of smoking, molten rubber on the asphalt 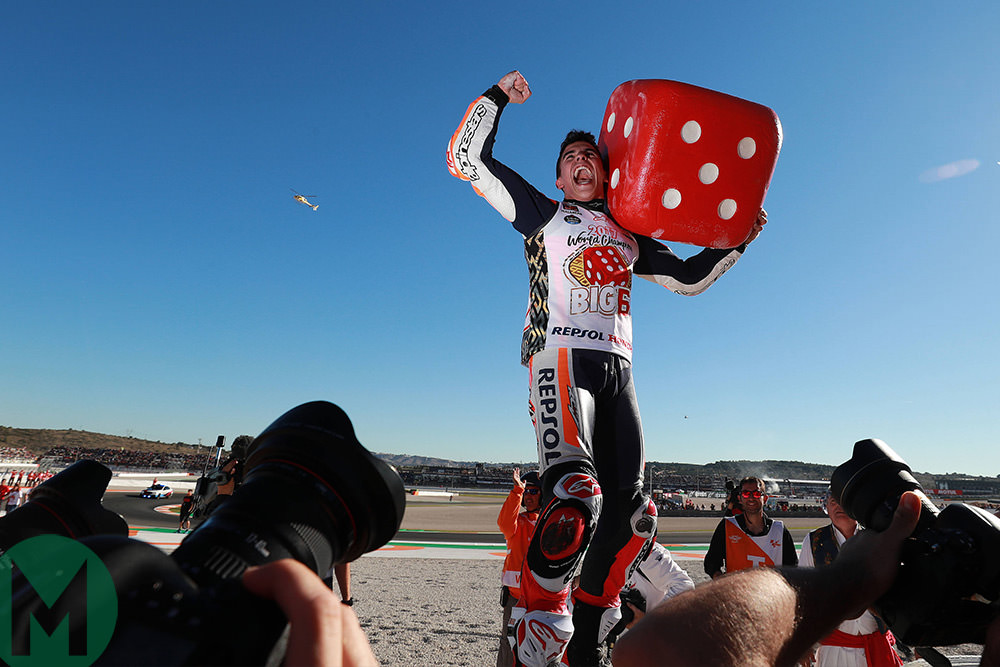 First, to the stats, to put things in perspective. Yesterday Marc Márquez won his sixth world championship in eight years, but possibly more importantly he rewrote two significant records, both previously owned by the riders most often considered to be the greatest of all time: Valentino Rossi and Mike Hailwood.

Even more incredible, Márquez is the first rider in 69 years of GP racing to win at least five GPs every season over eight years and three different classes.

He secured the title yesterday in mind-boggling style. You just know that there’s not a top rider on this planet who hasn’t been rewinding and reanalysing Márquez’s monumental Turn-1 moment during the Valencia race, while shaking their heads in disbelief and mumbling, “How? But… He’s crashed… The front tyre is tucked… There’s smoke pouring off the tyre. His left leg’s up in the air. He’s crashed… But… How does he do that? How can I learn to do that?” And they would’ve been doing the same a couple of weeks ago when he lost the front during Malaysian GP practice.

That Turn-1 Sepang moment, at perhaps 40 miles an hour, was special enough. The front had been tucked for perhaps 10 metres, laying a dead-straight smear of rubber, his Honda RC213V unable to even commence turning into the corner. Then the bike fell right over. He had crashed. But he didn’t crash. It looked like he was throwing himself between the track and the bike to break up a fight. And it worked. Márquez saved that moment like he was riding a minimoto bike, not a 150-kilo, 260-horsepower MotoGP bike. Then 20 minutes later he was back out in qualifying, etching more rubber in the Turn-1 asphalt, this time with the rear tyre.

My all-time favourite comedian Bill Hicks, who died some years ago, explained Márquez’s otherworldly talent perfectly. He wasn’t talking about motorcycle racers, but about people who live on the edge, specifically Rolling Stone Keith Richard, who spent his younger life living on the rock-and-roll edge.

“Keith went over the edge, then everyone looked down and there was an edge and he’s landed on it,” joked Hicks, referring to Richards’ ability to take things to the limit like no one else. “There’s a ledge beyond the edge, who knew? Keith found that ledge – what an explorer, what a bold man!”

“This is the only guy in the world who can save that crash!”

We’ve seen Marc Márquez do special things on a bike, this save is up there… pic.twitter.com/q4vi7x8bRr

Márquez is an explorer in the way he rides a motorcycle, just like Kenny Roberts, who introduced the art of rear-wheel-steering to a gobsmacked Grand Prix grid in the late 1970s. Rivals gazed in awe at ‘King’ Kenny’s ability to spin the rear, just as they gaze in awe at Márquez’s ability to scrub the front.

Roberts and Márquez both took things to the next level. It took several years for everyone to catch up with the American and it will most likely take a while before everyone catches up with Márquez.

Sunday’s save was his most jaw-dropping yet – this wasn’t a 40 mph hairpin, it was a 90 mph sweeper. Front-grip was sketchy in the race, which is why there were nine crashes, more than at any other dry-weather race this year. Márquez rode relatively conservatively for most of the 30 laps, until he finally decided that Andrea Dovizioso wasn’t going to get the win he needed to take the title, so he started pushing for victory, which is why he so nearly became the 10th crasher.

“First of all, when I arrived at the end of the straight I felt like another bike was very close to me and then I braked too late,” he said. “This was the first mistake. Then I went into the corner too fast and suddenly I had some chatter, which we had struggled with all weekend. And then I lost the front. But when I lost the front, I said, ‘OK, I will be with my bike until the end. I don’t know if we will finish in the gravel, in the wall, or… I don’t know, but I will be with her’. I knew I had lost the front, but the rear was still there, so I was able to save the crash with my elbow. I started pushing with my elbow and my knee 100 per cent. I think the main reason I saved the crash was because of the tension of the race. I was too stiff on the bike but I was also really sensitive all the time. Then when I pulled up the bike, maybe I could have leant the bike again and stayed on the asphalt, but… oooph, I preferred to go into the gravel.”

Márquez regained the track in fifth place, but was promoted to third when first Jorge Lorenzo fell and then Dovizioso.

Márquez crashed 27 times last season – compare that to Dovizioso’s six offs – which is another all-time record, for a championship winner. In fact after the race he joked that he’d had 27 and a half crashes, as well as perhaps another 50 near-misses.

“It’s too much,” he added, laughing. “Also, I was lucky not to be injured, but I saw that this was the way to fight for the championship this year: pushing from FP1. I go out, then on the second or third lap I’m already on record pace. If you are always pushing at the limit, it gives you a better feeling with the bike and helps you give better information to the mechanics. Then in the race, I think: I had a warning in practice at this corner or that corner, so I try to be calm. I take a lot of risks but for me it’s the way.”

This is the method to Márquez’s madness. Some people argue that riders crash because they don’t know what they’re doing, but when Márquez crashes he knows exactly what he’s doing. He is absolutely, definitively confirming the location of the limit, all the while absorbing and processing information. Many riders say they can’t go faster because they’re on the limit, on the edge. But how do they really know without pushing a bit further? As Bill Hicks said, there’s a ledge beyond the edge, where it’s possible to survive if you’re bold enough. That’s where Márquez exists: on the ledge beyond the edge. And so far, no one else has found this ledge.

The greatest motorcycle racers don’t only have fast right wrists, they also have fast brains. Probably the brightest two I’ve interviewed are Márquez and Rossi. They both talk in their second language but they are perfectly articulate. And you just know that they are thinking about other more important things while they’re chatting to you. That’s how they do what they do on the race track: they have that mental bandwidth to simultaneously think about riding technique, race strategy, bike set-up and everything else, while (to use a little racer slang) chewing the screen.

Neither should we forget that Márquez won his fourth MotoGP title in five years while developing a new engine. Honda’s big-bang engine may make its RC213V slightly easier to ride over race distance, but its torque and power characteristics change everything on the bike, from gear ratios to suspension set-up and electronics settings. This is why Márquez scored only one victory from the first eight rounds of 2017 and five from the last 10.

Márquez is also the first rider since Mick Doohan in 1998 to win the premier-class title despite three DNFs. He crashed out of two of the first five races, which told him that he needed to be cleverer with the front tyre, just like he was yesterday.

Who knows who is the greatest bike racer of all time, but any top rider will tell you that there has never been another like Márquez; a rider who happily dances along the precipice, trips over, legs dangling in the abyss, then rescues himself with his fingertips, grabbing that ledge beyond the edge.