Race insight: what happened and why during the 2019 Aragon MotoGP race? 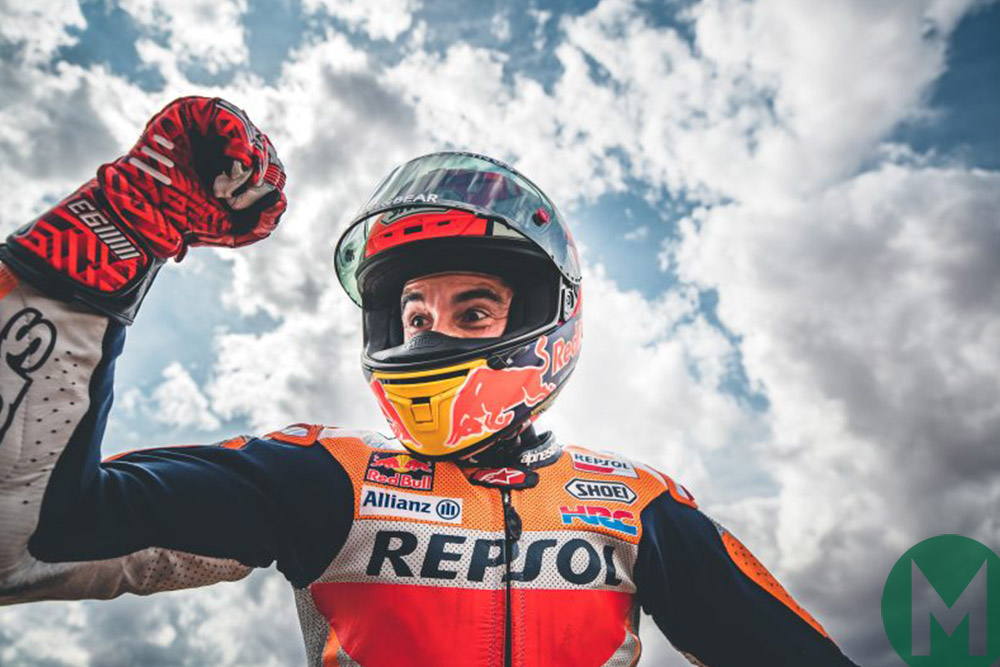 Aragon was Marc Márquez’s 200th GP start, so there was lots of talk about the 26-year-old, even before he ran away with the race.

On Saturday I sat down with a highly respected MotoGP technician – who’s worked with Wayne Rainey, Valentino Rossi and everyone else in between – to ask him what makes the reigning world champion so special.

I almost fell off my chair when he answered.

“It was all high fives from the boys. Then I looked at the screens and I saw I was two seconds off [Márquez]”

“The main thing is that Marc wants it more than anyone else,” he said. “Marc needs it, he craves it. He’s so focused, the other guys are like spoiled little brats…”

Wow. I won’t reveal this technician’s identity because he may find he’s a wee bit unpopular with the other 21 riders on the grid.

Márquez rides a Repsol Honda RC213V, but he also drives a steamroller, crushing the opposition and smashing records. He competes in by far the most competitive era of Grand Prix racing but he’s pretty much untouchable: eight victories and five second-place defeats (four of them by less than a second) so far this year.

I’ve never known top riders hold a rival in such awe since the days of Mick Doohan’s domination during the 1990s. And this is the truest way to understand the talent of riders – not through the eyes of team managers, journalists or fans – but through the eyes of the people who share the racetrack with other riders and see exactly what they can do on a motorcycle.

Márquez’s rivals struggle to explain why he’s so fast. They just look dazed and confused when you ask them why he’s so good at controlling front-tyre slides, which is his killer talent that no one else has fully mastered. Yet. 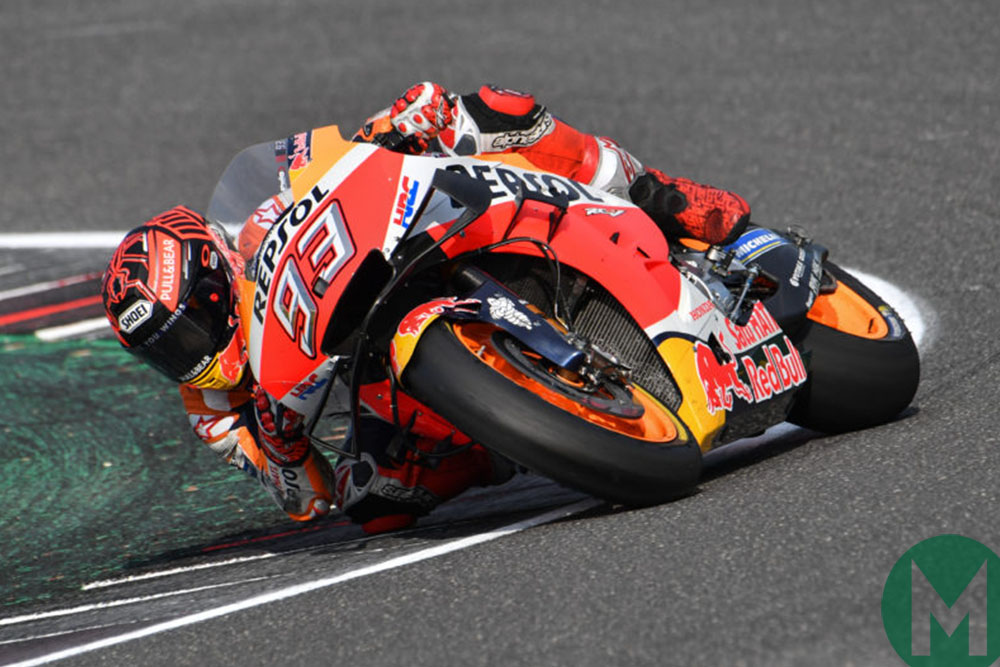 On Friday morning at Aragon, Márquez set the mood for the weekend by ending FP1 1.6 seconds ahead of everyone else – a ridiculous gap.

“I came in at the end of the session,” said Jack Miller, who finished Sunday’s race in third place, behind fellow Ducati rider Andrea Dovizioso. “It was all high fives from the boys – they were like, good session, mate! Then I looked at the screens and I saw I was f**king two seconds off. Good? That’s good? F**king hell, it hurts, it hurts.”

So how does Márquez do it? Miller shrugs his shoulders and lets out a big sigh. “Marc’s Marc,” he added. “He’s a different beast.”

After three races in which the MotoGP king looked anything but unbeatable, he wanted to prove a point at Aragon. At one stage he led the race by almost seven seconds, then eased off to take the flag 4.8 seconds in front of Dovizioso. No doubt he could’ve won the race by more than that; like in Argentina, where he disappeared over the horizon to win by 9.8 seconds. But maybe his success at Termas de Rio Hondo went to his head a little bit, because next time out at Austin in the USA, he built a four-second lead in just eight laps, then slid off.

“My main target here was to be focused, to be patient and not to push too much,” he said on Sunday. “The experience of Austin was always in my head, so I just kept going, trying to manage the gap, because what I learned in Austin is that it doesn’t matter if you win by 12 seconds, four seconds, or one second. Most important is the 25 points.

“In today’s race I was saving the rear tyre and also the front, because with the medium [front] I struggled a bit in left corners.”

Márquez’s fourth consecutive victory at anti-clockwise Aragon – there’s nothing more he loves than turning left – may have seemed like a forgone conclusion, but there’s no such thing as a foregone conclusion in motorcycle Grand Prix racing. No one ever gets to win a MotoGP race without skating on the edge of oblivion, no matter how easy they make it look.

Márquez’s rivals know he has taken another step forward this year – “he’s on another level now… he’s on another planet” – and some of this comes down to changes to the RC213V, which have yet to help his fellow Honda riders.

“We changed the balance of the bike for this year, so now I can race with the medium front, which is good because the hard front can be too much risk,” he explained. “Also, we have more engine this year. Now I can find the lap time in two or three different ways and this is most important thing.”

So the former 125cc and Moto2 champ has more straightline speed and he can feel the front tyre better when it starts to skid away from him.

Márquez did crash once last weekend – when he lost the front in the steeply downhill Turn Eight – while, surprise, surprise, giving the hard front tyre a try-out.

Apart from that, he didn’t put a wheel wrong – so what happened behind him was in some ways more interesting. Yamaha had a disastrous day and so did Suzuki, after Álex Rins centre-punched Franco Morbidelli on lap one, while Ducati had its best race following miserable outings at Silverstone and Misano.

How come Ducati went so well? (Apart from the fact that Dovizioso’s GP19 was the fastest bike at 214.9mph (346.1km/h), 3.7mph (5.9km/h) better than Márquez’s RC213V.) Aragon is mostly long corners, not usually a strong point for the Desmosedici. Bikes spend a lot of time at high lean angles, which can burn the tyres. And this may be why Dovizioso was so strong – like last year – because he is the king of looking after his tyres.

The Italian won ten races in 2017 and 2018, largely because he is so good at working the throttle to minimise wheelspin, so he has more rubber left than his rivals for the crucial final laps. The reason he has only won two races so far this year is largely because Michelin’s 2019 rear slicks are stronger, so they last longer, which has negated his tyre-saving skills. However, these skills were once again useful at Aragon.

During the weekend most teams substantially reduced torque in the first three gears to help the rear tyre, but tyre life was still mostly in the hands of the rider.

Like Márquez, Dovizioso and Miller chose the soft rear slick, which might seem a daft choice at a fast, grippy track with long corners. But most riders and teams now know how the Michelins work. The soft rear has better grip, so it spins less. In theory, the hard rear should last longer, but it has less grip, so it spins more, so it doesn’t last as long. Track dependent, of course.

“Michelin bring their compounds to every race and we get the paperwork that says which tyre works in which thermal range,” said Miller. “In my experience, if we run the soft we have better grip, so long as you don’t over-spin the tyre and you use it in the correct way – don’t upset it too much and don’t put too much force into it.” 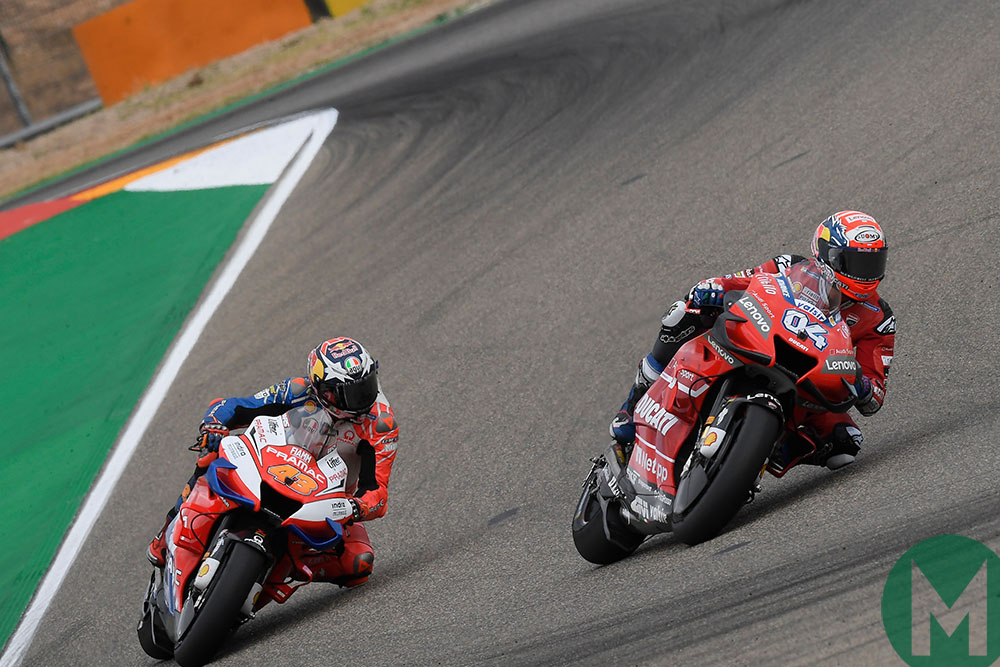 Miller spent the last nine laps of the race behind Dovizioso, during which he learned plenty.

“Andrea was a little tighter than me in a few corners and getting better acceleration,” said the Aussie. “Whereas, typical me, I was going into corners too fast, running wide and opening the throttle a little too early. Once he came past me I understood what to do, especially at the top of the hill – Turns Four, Five and Six – where he was really hugging the kerb, getting a lot more grip than me coming out and using a heap less torque and a lot less metres.”

Miller learned even more by witnessing Yamaha’s race fall apart. He spent more than half the race close to Viñales, who ran the hard rear slick, just like the other three Yamaha riders: Fabio Quartararo, Rossi and Morbidelli. This was a bizarre decision. The Yamaha riders tried the soft rear on Saturday, but found its grip dropped too rapidly; hence the decision to race with the hard. But Sunday was considerably cooler than Saturday, so surely the soft would’ve been a better option?

“When Maverick passed me, he had a lot of spin and a lot of smoke,” Miller added. “With the hard that can be great – you can do that for a few laps, but the tyre is missing grip. So to keep up with us Maverick started to spin the tyre more and at the end of the race he had no rubber left on the left side.” 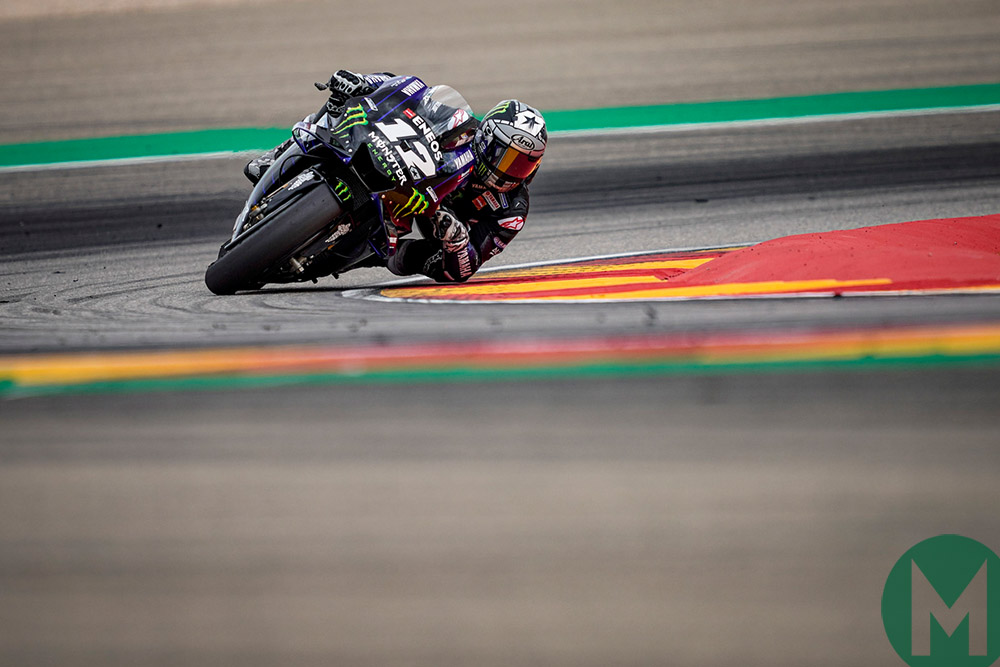 Rossi was in much more trouble, slipping to eighth, behind Aprilia’s Aleix Espargaró, arguably the hero of the race.

“I had a big, big drop from the rear after five laps, so I had to slow down,” Rossi explained. “I don’t think it was a tyre problem, it was more a setting problem. I was sliding very much and when you slide on the edge of the tyre you damage the tyre more, so we need to find a solution.”

Buriram in Thailand next, where Márquez could wrap up his sixth title in seven years and the Yamaha riders may not suffer so badly. Michelin takes a special harder-construction to the ultra-demanding track, which is why Vinales and Rossi fought for victory last October, finishing 0.3 seconds and 1.5 seconds behind winner Marquez. At Aragon Rossi finished 23 seconds behind Márquez.

Yamaha has improved this year but has much further to go. More on the factory’s next breakthrough tomorrow…