The first in an occasional series of chats with MotoGP’s top crew chiefs – this week it’s Santi Hernández, right-hand man to Marc Márquez 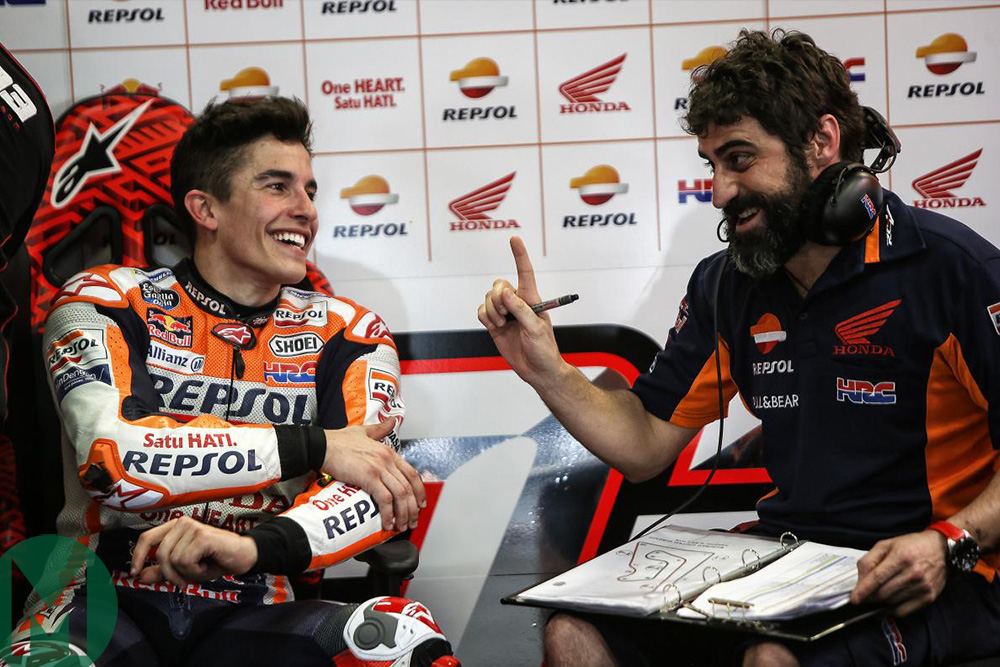 My father was a race-bike mechanic and my brother raced in the Spanish championship at the same time as Alex Crivillé, in the early 1980s. At that time I was very young, so we’d go to the circuits, with me sleeping in the van, between the bikes. There were always bikes around the house, but I didn’t like bikes, I was focused on soccer.

Then my father gave me the opportunity to ride bikes. I raced in the Catalunya scooter championship and went to technical college, studying mechanics. In 1996 Juan Martinez [who now works for Spanish TV] and Antonio Jimenez [now a Moto2 crew chief] got me a job with them at Showa. I started working as suspension engineer with HRC in 1999, with Crivillé, then Sete Gibernau, Colin Edwards, Marco Melandri, Valentino Rossi and Max Biaggi. When Alberto Puig created his first world championship team from the MotoGP Academy he gave me my first job as crew chief, with Bradley Smith, then I worked with Randy Krummenacher, Sete at Ducati and Jules Cluzel at Forward. When Emilio Alzamora started building his Moto2 team for Marc in 2011 he gave me the job of working with Marc.

How do you work with Marc each weekend, what’s your programme?

Everyone has their own system. When we get to the track we have a meeting with Marc on Thursday to make a global picture for the weekend. We make a summary of the last GP or test to remember what happened, to understand what we’ve analysed at home since then and to make clear the positives and negatives, always to help the rider understand.

We try to cover all the possibilities about how to manage practice: we look at the tyres, the set-ups we will use with both bikes and the weather situation, because things aren’t the same when you have unstable weather. You never know what will happen, so the more things you are ready for, the easier practice will be. I always like to think in a negative way, not in a positive way, because if you think in a positive way you think everything will be OK, so you just put petrol and tyres in the bike!

The big positive of Marc is that he never gives up

You have to ask many questions: will the problems be this or this or this? And how can we manage these situations and find the right answers? Of course, you don’t always have the answers, because problems come along that you aren’t prepared for. But at least you try to be ready. It’s important to have a plan so the rider understands. You can’t just say, we will start the weekend and see how things go. The rider needs to concentrate on his own work, so you need to give him stability across the whole weekend.

Do you start the weekend with Marc’s bikes the same or different?

The way we prepare for each race depends on many things. If we are at a circuit where it’s clear which way to go with set-up then we prepare both bikes the same and concentrate on tyre choice, so the rider gets the chance to ride thinking only about his riding. But this isn’t normally the case, because the bike is rarely perfect and you always want to improve, so we prepare both bikes in different directions.

In 2014 the bike worked well at every circuit. We were a step ahead of the others, so we only needed to make small settings changes from one circuit to another, so it was easier. But over the last three seasons we have struggled quite a lot, because in 2016, 2017 and also this year we have always had a new type of engine, so we needed to understand how to manage the engine and how to set up the bike with the engine. This is especially true at the first races, so you set up both bikes in completely different ways to try and find a base setting. If you find a base that works at five different circuits, then you can say, okay we have a good base. After that we set up both bikes with the same geometry, then make small adjustments to the suspension, electronics and gearbox.

How would you describe Marc’s ideal bike set-up?

Marc likes to have very good confidence in the front because he used the front tyre so much. As soon as he loses confidence in the front then he struggles. Especially now he must manage the tyre well because it’s important to have good front-tyre life. He’s also working on his riding style to help this. Most riders always want more power and more rear grip, but Marc really needs the front. 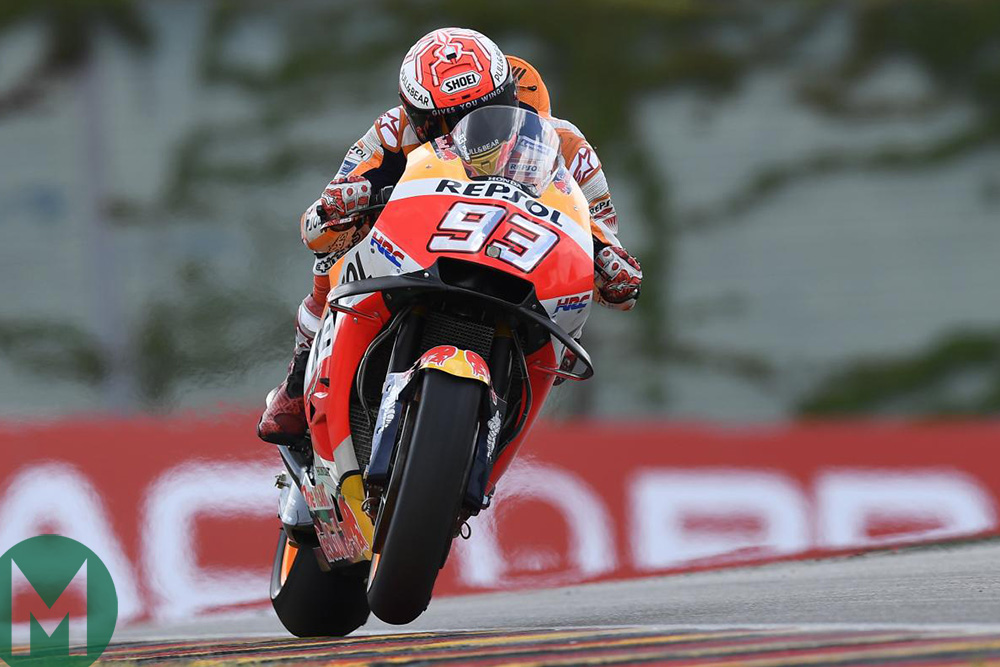 The RC213V was designed around the Bridgestone front, so how did the change to Michelin affect Marc?

When we changed to Michelin we needed to understand many things, especially geometry, set-up and chassis stiffness. After three years the way we set up the bike and the way we understand what Marc needs are completely different. Also, the change to Magneti Marelli electronics really changed things. Before that, we used Honda electronics, which helped us a lot. At first, the Magneti software was very difficult for us to understand, it wasn’t helping. Now we can better manage the electronics, the engine and especially the tyres.

Tell us about Marc’s use of the rear brake…

Marc uses the rear brake all the time, especially in corner entry because he likes to slide the bike to prepare his entry, which came from Moto2. Now we understand how to help with this, with bike set-up and especially with engine-braking settings.

As a technician, you must be careful because sometimes you can focus so much on a problem that you forget the simple things. If the bike doesn’t turn in the middle of the corner then you focus on this, but you mustn’t forget that perhaps the problem comes from how the rider brakes and enters the corner, instead of what he does in the middle of the corner. So you need to be careful with the rider’s comments, you need to check all the possibilities.

It’s the same with wheelies. The bike wheelies on the corner exit, so you focus on what’s happening there, but maybe the real problem is that the rider isn’t entering the corner correctly, so his corner speed isn’t high enough, which could be the real cause of the wheelie [because the rider needs to accelerate harder]. It’s not always easy to understand the answer to a problem!

Marc uses more corner speed now. In the last few seasons we struggled a lot with acceleration and top speed, so we focused a lot on braking, so he could recover what he lost on the straights. This year our engine is better, so we don’t need to sacrifice so much for the braking area, so he can use more corner speed.

The big positive of Marc is that he never gives up. Even when the bike isn’t perfect he will try to make the difference anyway. He’s smart enough to understand when he doesn’t have the best set-up for the race, so he tries to find a way to ride around the problems to get the maximum out of the bike. In 2016 and 2017 we didn’t have the best bike, but in the end, he managed the situation and knew where he could make difference.

Is Marc good with his feedback?

The first time I worked with Marc was when we started Moto2 testing [at the end of 2010]. I was very surprised how a 17-year-old with no experience of a big bike could explain to me what was happening. It’s easy to work with him because the way he explains problems gives you the answer about what to do to the bike. This is the most important thing. It’s like going to the doctor and telling him you have a headache, but you don’t tell him anything more, so, maybe in a few months, you’ll know the answer to your headaches. But if tell him you get headaches when you do this or that, maybe he can make an instant remedy. Some riders are fast but are unable to say what’s happening with the bike, but Marc is very fast and can explain what’s happening.

Do you debrief in Spanish or in English?

We always do our debriefs in English. When we started in Moto2 we were a Spanish team, but Emilio said we must prepare Marc for MotoGP, so we must speak in English, because once you are in MotoGP you have many technicians from different companies. Marc is very clever. At our first MotoGP tests HRC put a diagram on the triple clamp, which explained the electronics buttons. But he asked them to remove the sticker. He said he needed his thoughts to be automatic.

How is Marc in the pits?

One of the most amazing things about Marc is that when he comes into the pits I never know if the bike is working well or badly! He always uses the same procedure: he sits in his chair, checks his notes and doesn’t show any positive or negative feelings while you are waiting for him to speak. This is important because it makes sure the technicians don’t get nervous or feel too much pressure. If I have an idea, something to try, Marc always wants to give it a go, but some riders aren’t like this, they don’t always want to listen to your suggestions. If it’s positive, we keep it, if it’s not, we go back. I like that in Marc’s style. And he never gets angry.

Do you meet between races to discuss the bike?

We used to, but now he is too busy, doing events with sponsors, training and so on. But every week we speak on the phone a few times, or sometimes I meet him in Cervera when he’s doing dirt track or motocross. Or sometimes he sends me a WhatsApp message: hey, Santi, could we try this at the next race?