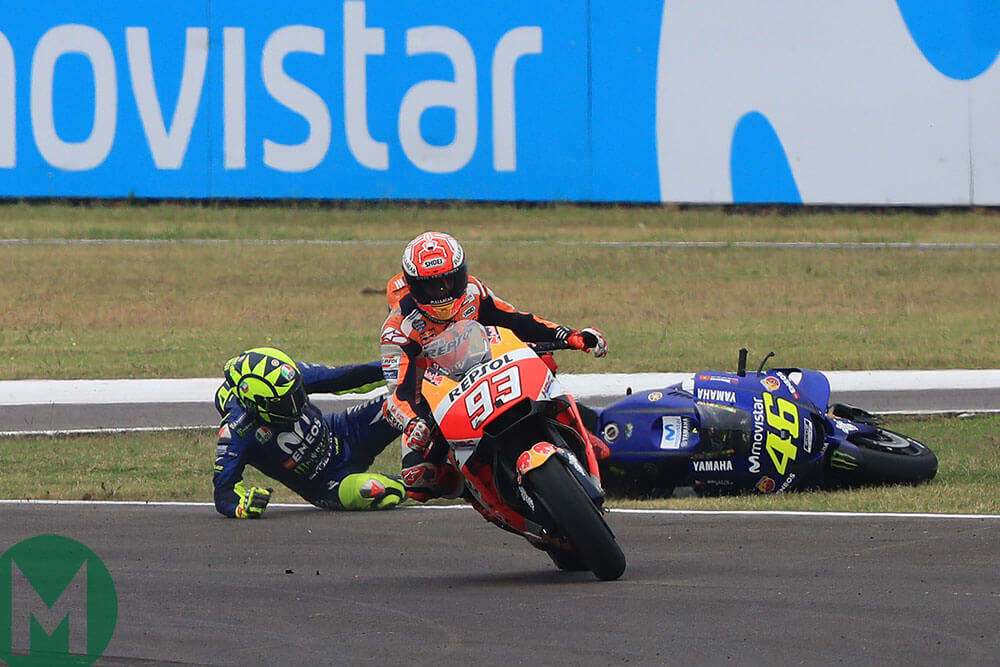 First, I have a confession to make: I like a bit of chaos. Few things are more over-organised than modern sport, which mostly runs like a well-oiled machine, so sometimes it’s good to see a spanner thrown in the works.

It’s not unusual for this to happen in South America. Some years ago during the Brazilian GP in Rio de Janeiro, practice had to be stopped because the circuit had a power outage. The owners hadn’t paid their electricity bill, so the electricity company waited for the perfect moment, then pulled the plug. Practice continued once they’d got their money.

This sort of thing rarely happens nowadays. Like I said, everything is too well organised, there are too many rules and very often there is too much health and safety. So I hugely enjoyed Sunday’s action, with a few obvious exceptions. To me, one of the joys of motorcycle racing is that it is a kind of chaos, even when it’s not particularly chaotic. I don’t think any other sport better fits George Orwell’s famous words, written in December 1945, when his mind was already working towards writing 1984.

“Serious sport has nothing to do with fair play. It is bound up with hatred, jealousy, boastfulness, disregard of all rules and sadistic pleasure in witnessing violence: in other words it is war minus the shooting.”

Thirty years later, the writer who created the movie Rollerball had similar ideas. “When I look at the film now, I feel like a prophet,” said William Harrison. “In Roman times they had death sports in the Coliseum and the Circus Maximus. They’ve been toned down now into NFL and other sports but they’re still there. When I wrote Rollerball, sports were becoming dark and violent. There was a general nastiness, which I picked up on.”

The disregard for the rules started before Sunday’s race had started, the general nastiness later. Okay, the mass walkout from the grid wasn’t against the regulations, but 23 of 24 riders sauntering back into pit lane to switch to their spare bikes equipped with dry settings looked like a copout, especially if you were sat where Jack Miler was sitting.

At this point race direction seemed to forget there is a rule specifically designed to deal with this instance, introduced following a similar occurrence at the Sachsenring in 2014, when most of the grid started the race from pit lane, elbow to elbow, handlebar to handlebar. That was scary to behold; thrilling too. I enjoy a bit of chaos – did I already say that?

And then there was Marc Márquez, stalling and bump-starting his bike, then committing the cardinal sin of riding the track in the wrong direction. It was obviously an illegal manoeuvre, given a hint of comedy by IRTA’s Tony Congram chasing the world champion around the grid like a copper trying to apprehend a joyrider.

And then there was Márquez during the race, from first to 19th to fifth to 18th. I know, I know, it was too much. Yes, yes, he took it too far. But, wow, just, wow. When do you get to see a rider lapping up to a second faster than anyone else, making the best riders in the world look slow?

It was like watching local hero Diego Maradona lay waste to a rival team’s defence. It was pure poetry, his RC213V juddering this way and that, making all kinds of shapes as he danced across the wet patches, which most of his rivals treated like ice. Damn him all you want, but his talent for riding a motorcycle way beyond the limit is otherworldly. I’ve never liked the term ‘alien’, but on Sunday Márquez really did look like he had come from another solar system and was subject to a different law of gravity.

It was a shame he had to spoil it. In the end, he was Maradona driving a hot hatch like he stole it, with the throttle hand of god.

Was he punished severely enough? The ride-through for his grid indiscretion fitted the crime. And so did the time penalty for barging into Valentino Rossi, because the 30-second sanction was imposed specifically to drop him out of the points, with the same effect as a black flag or a disqualification. But Race Direction should have either black-flagged or disqualified the world champion, to send a stronger warning.

What about the episode with Aleix Espargaró? This was the worst thing Márquez did all day – because it happened at a high-speed corner – but he got away with the sanction of dropping one position. On the other hand, Espargaró received a bigger wallop from Danilo Petrucci, albeit at a slower corner, and Petrucci wasn’t punished. And neither was Johann Zarco penalised for nudging Dani Pedrosa on the first lap, which led to the Spaniard crashing out. Let it not be forgotten that they are all sinners.

Márquez’s greatest sin on Sunday was the multitude of his sins. He seemed intoxicated by his blinding speed, which had him rushing up on rivals like they were backmarkers. He was too hasty in his attacks, too willing to park his RC213V on the inside of rivals when there was no room. He must cool his head and take more care, because, after all, he is on the same planet as his rivals. Before COTA, race direction will surely tell him that he is on a final warning and must contest the rest of the season with the Sword of Damocles hanging over him.

Should race direction impose further penalties on Márquez, even though he was punished for each of his crimes on Sunday? I don’t think so. I certainly wouldn’t judge any of his crimes as harshly as I would judge what Aron Canet did during Friday’s Moto3 practice. The important factor here is intent. As far I could see, Canet took out Makar Yurchenko intentionally, for getting in his way earlier in the lap. This is a very different matter, whatever the outcome. I have no doubt that race direction made the wrong call on Canet.

What about the winner? Right after the race, Cal Crutchlow complained that the media were more interested in chasing the Márquez/Rossi story than in finding out how he had made history by winning Honda’s 750th Grand Prix victory. But this is humanity and it has always been thus.

Crutchlow’s ride was brilliant. He judged the race perfectly, hanging around at the rear of the lead group to look after his tyres, only pushing forward when it mattered.

The 32-year-old gets a lot of criticism from some people, for crashing too much, for being too outspoken, but he’s won three races over the past one and a half seasons. And he’s not even in a factory team. Yes, he’s now an HRC rider with a factory bike, but he doesn’t have the retinue of engineers, data technicians, assistants and gofers with which factory riders are blessed. In other words he is at a disadvantage to his factory rivals. To win three MotoGP races is a major achievement for anyone, for an independent-team rider it is quite exceptional.

Crutchlow is the same as he ever was; “a gritty little boxer type,” according to former racer Ian Newton, who runs the Aprilia Superteens championship which Crutchlow contested in 2000 and 2001. “Cal was what he is now: a determined little git and quite cocky,” Newton adds.

Many top racers opine that most of the world’s fastest have a similar talent to ride a motorcycle; so what sets them apart is commitment and determination. Crutchlow has towering mountains of commitment and raging rivers of determination, which explain his ability to crash heavily, then go even faster, as well as his cockiness, which is more of a racing weapon than a character flaw.