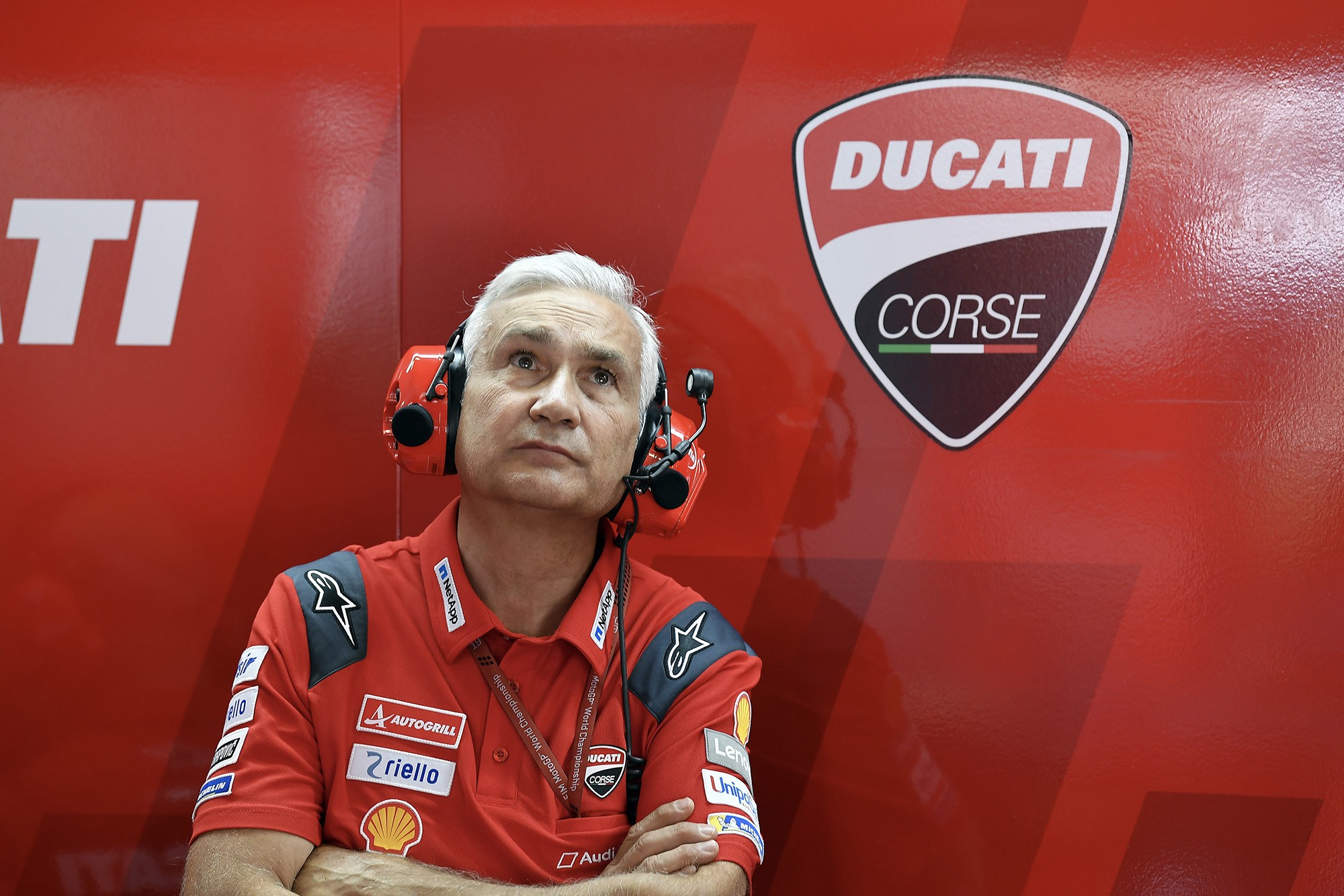 Andrea Dovizioso has finished second in the MotoGP riders’ championship for the past three years, while Ducati is fighting to be runner-up in the MotoGP constructors’ championship for the second consecutive year; currently just one point in front of Yamaha. We asked factory team manager and former World Superbike rider Davide Tardozzi about what the Bolognese are doing to beat the Japanese in 2020.

How would you judge your 2019 season?
It’s obvious that our bike has some very good points and at least one weak point – the turning – which we are working on. We haven’t found the right solution yet, but we have a good bike and for the third year in a row we have taken second place in the championship behind a fantastic rider like Marc Márquez, which in some way is a result. We don’t go racing for second place. We are just facing the reality that we are fighting against a rider who is making the history of this sport. Marc is causing a lot of problems for everyone!

What’s on your wish list for 2020?
My strong wish is that we find something that will suit the requirements of our riders, because I think if we make another step we can really fight for the championship.

There is no such thing as the perfect bike. Every bike has good points and bad points, so you must focus on your weak points. We think our MotoGP is a very good bike that in some way doesn’t properly suit every racetrack. We know this and we are working on it. My wish is that we solve this problem.

You’ve had one frame update during this season – after Barcelona – how did that help the turning?
It helps in the last part of braking – when the rider is entering the corner and releasing the brake the bike turns much better. Our main problem now is the exit of the corner – turning from mid-corner to the exit.

Now I see Jack more focused on the important things, whereas before he was focused on enjoying the slides out of the corners!

How are you working to fix that problem?
Our chassis department is working on several areas of frame development. There are hundreds of things that can make the frame work one way or another.

We do not have the experience with aluminium frames that the Japanese have. So we are still learning from our mistakes and we are still improving from one frame to the other, so I think we will find the way sooner or later. I hope we will do it for next year, but it’s a very wide-ranging work.

Perhaps you should steal a Yamaha chassis guy?
We are happy to say that we don’t steal technicians from other factories.

Apart from Gigi Dall’Igna from Aprilia! Recently KTM’s Pit Beirer said recently that he doesn’t believe you can win MotoGP with an easy-riding inline-four, that you need a more powerful V4…
I agree – I don’t think that an easy bike can win the championship because in MotoGP you don’t only need easy torque and soft electronics, you also need a lot of horsepower. Honda is winning with a bike that isn’t an easy bike, but it’s the winning bike. Okay, so Marc is riding it, but in the end it’s still the winning bike. Power is always the main goal of this sport, then you have to follow that with everything else. 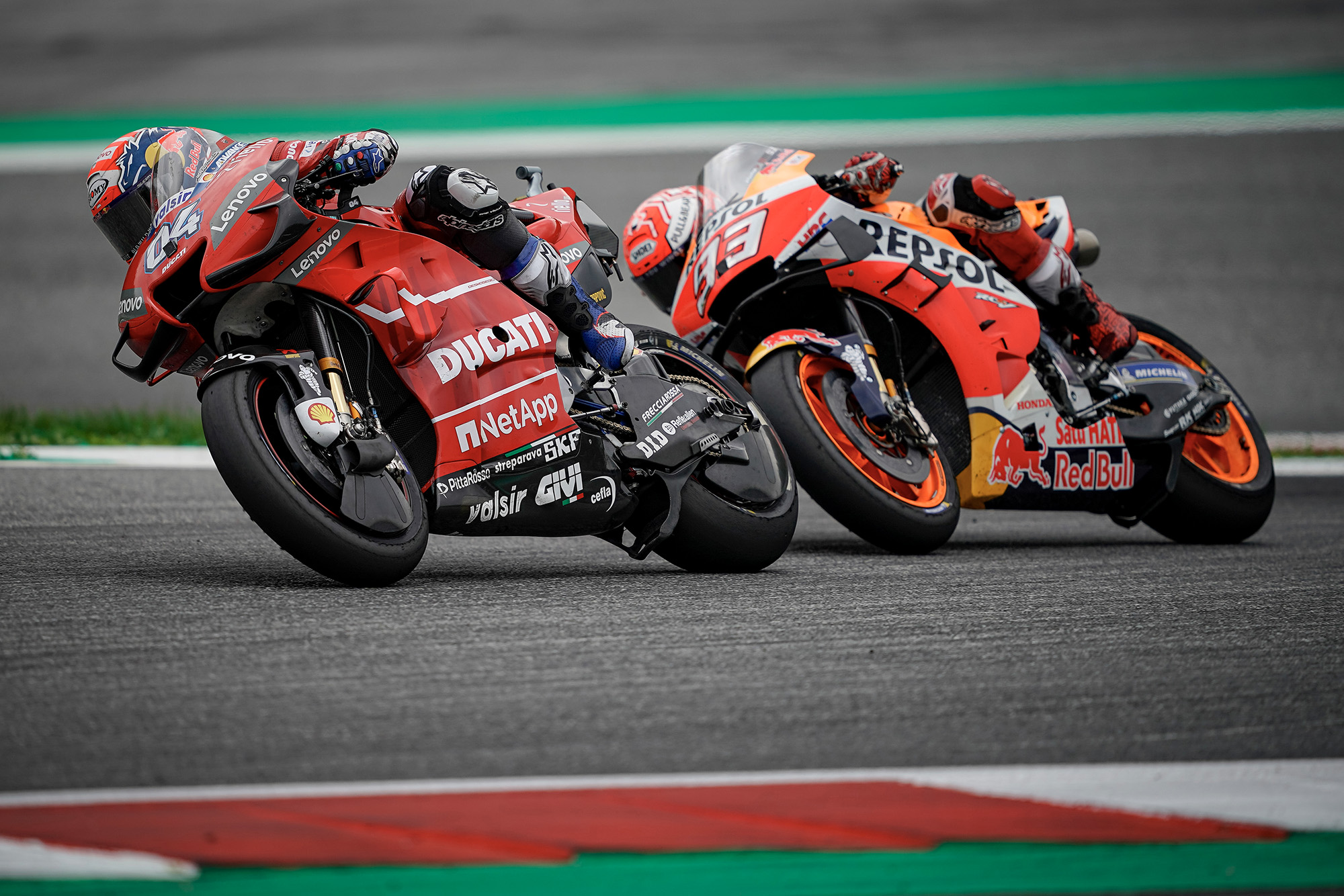 Do you think you need fighting riders more now, because they no longer have tailor-made factory electronics to help them control the bikes?
I think the mental attitude of the rider is one of the main issues in race results. I guess Marc opened a new era of riding and [Fabio] Quartararo is following him. And you know what, even though Álex Rins doesn’t seem so aggressive on the bike, he is. I think we have a rider like this in Jack [Miller], and when he finds his own way he will make another step and he will soon be with the top riders. I expect a lot from Jack next year.

Did he lose his advantage this season because Michelin’s 2019 rear slicks are stronger?
Yes, Andrea is the master of managing the tyres, so when there’s no problem with tyre life the other riders that are more aggressive with their tyres can reduce his advantage

You must be impressed by Miller’s recent results…
Jack made a small step mid-season. Now I see him more focused on the important things, whereas before he was focused on enjoying the slides out of the corners! Now he is thinking more and he has become more professional, so I think he is very close to making the next step. In the Pramac team we always have riders that are Ducati’s future. 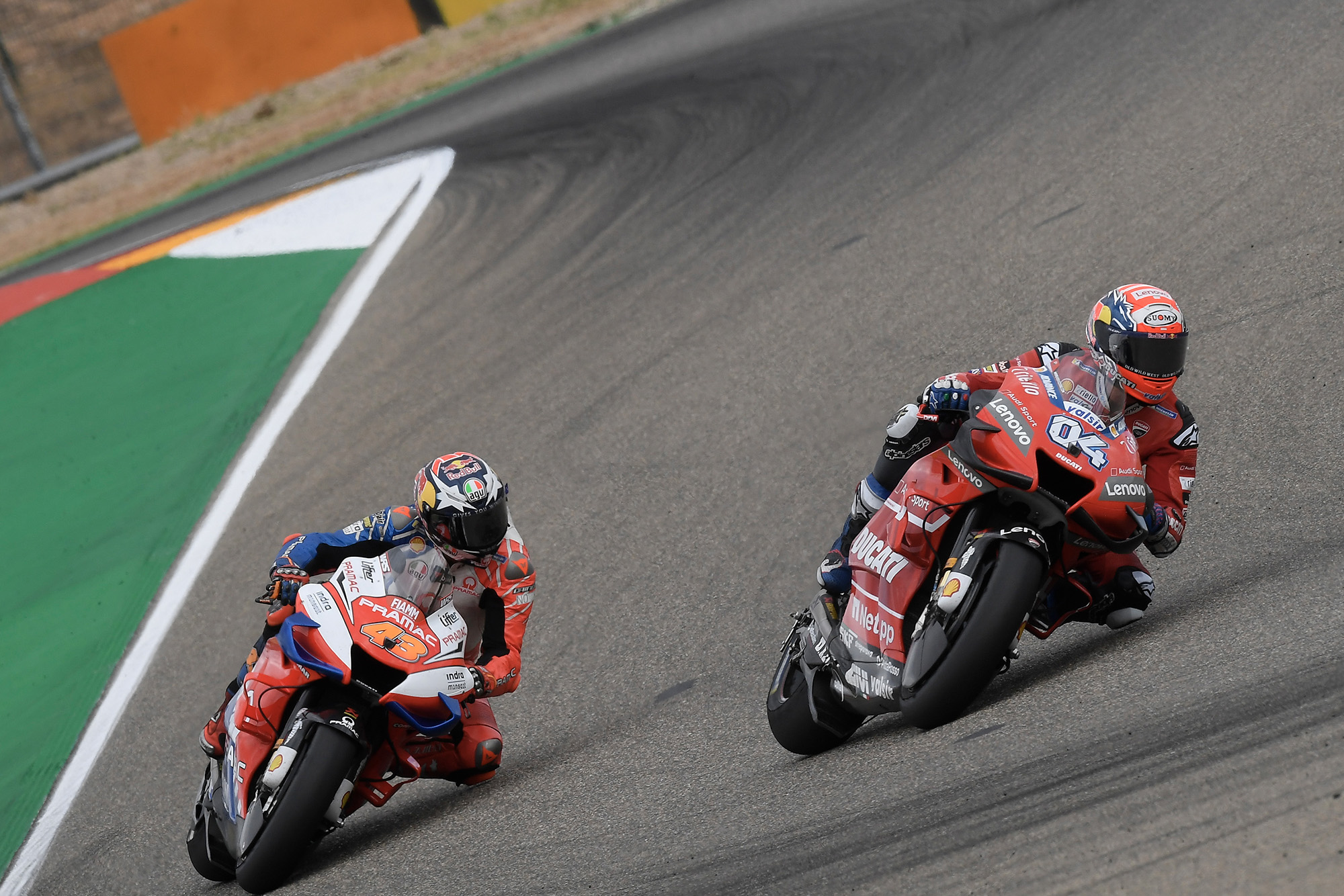 Will Miller get more direct factory support in 2020?
Jack has a Ducati contract, he has a factory bike and he has a race engineer and electronics engineer from Ducati, so he is in the Pramac team but under the Ducati umbrella. Gigi follows him very closely, even though Jack isn’t in the red garage.

The main difference of being in the factory team is that you have more support from behind the garage wall, where the electronics guys work to tell the race engineers what they see when they analyse the data.

Also, everything that a factory team rider tells his race engineer and all his problems are split between four people behind the garage wall, which helps the race engineer to solve problems more quickly. That’s the main difference between being in the factory team and the Pramac team.

How many tyre analysts do you have?
We have one person here at the track and a few at the factory who work on tyre data for all four of our riders in the factory and Pramac teams. Each tyre is individually checked via data, then during our meeting at the end of each day our tyre person shares all the information with our race engineers.

What about something like Silverstone, where Miller’s rear tyre performed very differently in the race?
That’s another story. If one tyre doesn’t perform like another tyre with the same number then it’s something we do not know and I guess that it’s something that even Michelin doesn’t know.” 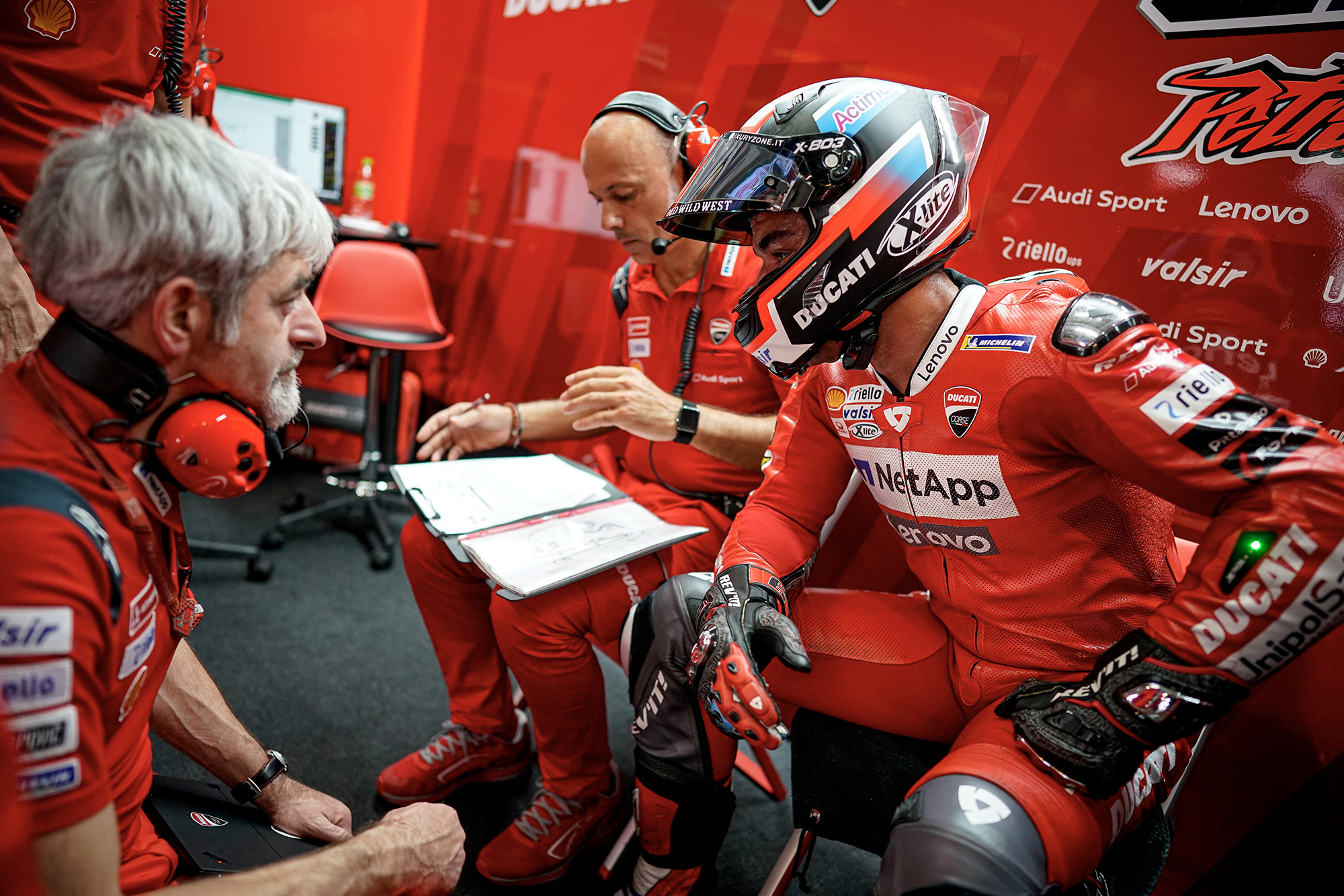 Petrucci in the Ducati garage with Dall’Igna Photo: Ducati

How do you explain Danilo Petrucci’s recent slump in form?
I think it’s a mixture of things – a psychological thing together with some problems we face at some tracks that don’t suit his ride style and our bike so well. Danilo was the first to mention the psychological issue.

Do you think his size and weight are an issue?
His weight wasn’t a problem during winter testing when he was always in the top three on fastest lap times and was always the fastest on average lap times.