Another race, another victory, so what exactly is Marc Márquez’s big secret? 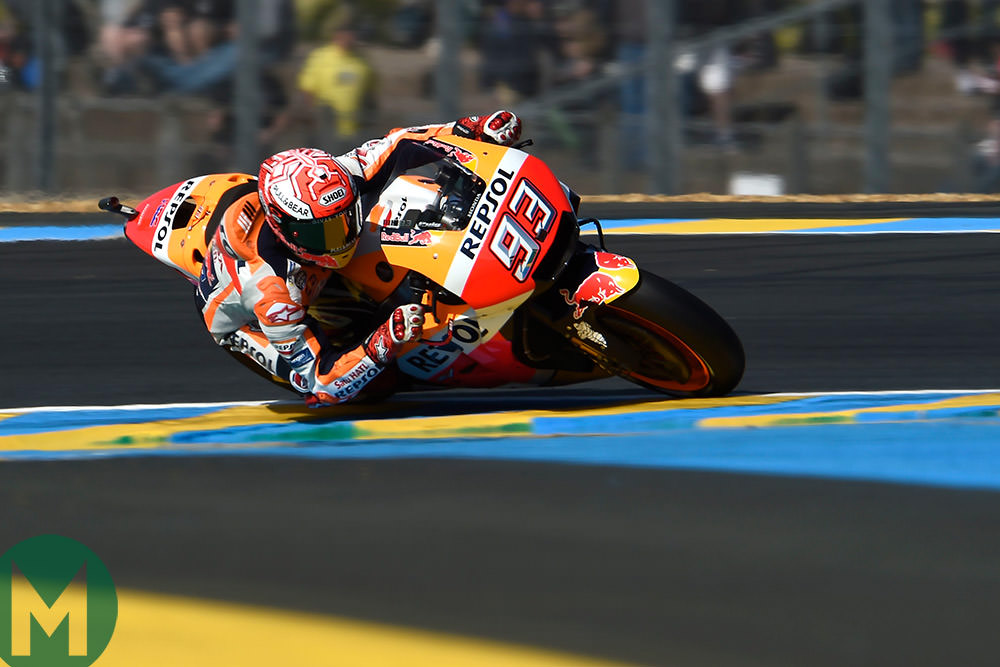 I’m stood in the Le Mans pitlane, chatting with a venerable MotoGP engineer, trying to eke from him the relative merits of every bike on the grid.

“The holy grail of motorcycle racing has always been to come up with a device that can save front-end slides, and now Honda has one…” he says, pausing for effect. “He’s called Marc Márquez.”

And that there is the story of MotoGP right now. Love him or loathe him, Márquez is on another level to everyone else. He has an ability that none of the others possess. That doesn’t mean he’s unbeatable, because he’s not always the fastest man out there, but it’s this unique talent that helps him to make the difference.

Most people only notice Márquez sliding the front tyre when he’s saving a slide, or not quite saving a slide. But his uncanny ability to play with the front tyre isn’t merely about trying to save crashes; it’s about using the front-tyre slide as a performance tool, to help pivot the bike at the apex of the corner to tighten his line and therefore cut faster lap times.

His almost supernatural ability to save front slides was especially noticeable at Le Mans, where there were no less than 109 crashes over the three days, more than twice the total at Jerez a fortnight earlier.

Márquez was one of those fallers. On Saturday morning he was, as always exploring deep into the unknown when he tipped into the Turn 3 left-hander, lost the front at 56 degrees of lean and crashed his Repsol Honda RC213V. But the crash was a long-time coming, especially in super-slow-mo. The front tyre folded to the left a few degrees, the handlebars swung the same way by a few degrees and the bike stayed like that for what seemed like an eon, as he fought to stay in control, by digging his left elbow into the kerb, by digging his left knee into the asphalt, by adjusting his body position and by gently opening the throttle take load off the front tyre. Throughout these few seconds the tyre had already lost grip, it was merely skating across the asphalt, while Márquez scrambled to remove some load, slow the skid and give the rubber a chance to regain traction.

Finally the battle was lost, the handlebars swung to full lock and he was down: scraping the bodywork, breaking the aero and snapping a footrest. Márquez got straight to his feet, picked the bike out of the gravel, bumped-started the engine and carried on like nothing had happened, upping his pace over the next few laps to go second quickest in the session, even though the RCV’s lopsided aero made the bike pull to the right whenever he hit the brakes.

There is a reason why riders crash at Turn 3 (Le Mans’ first left-hander). The left side of the front tyre hasn’t touched the asphalt since Turn 12 of the previous lap and has been cooling down ever since, so by the time the rider arrives at Turn 3 the front tyre may have reached a critically low temperature. This is something that all riders must deal with at Le Mans. I remember watching at the same corner on Saturday morning in 2012, when four MotoGP riders ended up in the gravel because their front tyre had cooled down too much on the start/finish straight. Imagine the psychology of dealing with that as you hurtle through the 150mph turns one and two, then brake into the next corner…

During Sunday morning warm-up, Tito Rabat had the exact same crash at the exact same place as Márquez 24 hours earlier. It was interesting to compare the two accidents in super-slow-mo. Rabat’s front tyre folded and the handlebars swung to the left, just like Márquez. And that was that. Rabat was down. Sure, the 2015 Moto2 world champion isn’t Valentino Rossi or Jorge Lorenzo, but his inability to play with the skating front tyre to bring it back from the brink was a perfect illustration of the difference between Márquez and everyone else, including Rossi and Lorenzo.

Then Márquez did same again during the race, except this time he didn’t fall off. The front folded as he swept into Turn 3, soon after he had taken the lead, and it stayed folded for a millisecond or three before Márquez dug his left elbow into the track to rescue the situation, no doubt utilising the lessons learned the previous morning. In other words, if his third victory in a row looked like a walk in the park, it wasn’t.

Riders had two realistic Michelin front options for Sunday: the medium or soft. Most knew they would have to race the medium, even if the tyre was tricky, because many riders had crashed in practice while trying it out.

Zarco blamed his crash on carrying a fraction too much speed into a downhill corner, with a full fuel load. Dovizioso’s explanation was a bit more complicated. “That was the first time I had used the front tyre to the limit. I braked a little late and went a little wide, so I tried to slide the rear to help the bike turn and remove some weight from the front, but I had two movements from the bike and when it came back I lost the front. I had also lost the front in practice; the reason I crashed in the race is because there is always less grip in the race.”

Fourth-placed Jack Miller raced with the soft front after the medium had given him a few scares in practice. “I think the soft was the right option, looking at what Dovizioso did with the medium,” he said. “Race day was hot, but with all the Moto2 and Moto3 rubber down, we needed the edge grip the soft had.”

Miller spent much of the race chasing runner-up Danilo Petrucci, the highest finisher with the soft front, and third-placed Valentino Rossi, who chose the medium. “I knew the soft tyre was a risk,” added the Aussie. “I got a lot of squishing and made a few little mistakes at Turn 8. A couple of times I went in there and had the front tyre collapse [deflect too much], so I had to release the brake and go again. Valentino made the same mistakes, so I knew it would be like that.”

Márquez walked the same line as everyone else but stayed on and won the race. It’s also worth noting that he was the only rider on the grid to choose the hard-option rear slick; so he had made brave but risky choices at both ends.

“Marc is a freak!” says fellow Honda rider Cal Crutchlow, who isn’t the only rival who holds the reigning MotoGP king in awe. “He saves a bike at 60 degrees of lean 15 times a weekend. That doesn’t happen with anyone else.”

The 25-year-old isn’t the first bike racer to rule the world by controlling front-end slides, which is probably a hundred times more difficult than controlling a rear-end slide. The man who first brought this dazzling skill to the sport was ‘Fast’ Freddie Spencer, winner of the 1983 and 1985 500cc world championships.

It says something that it’s taken 30 years before someone else has come along and done the same thing, albeit much more spectacularly, thanks to much-improved tyre performance. Spencer also employed the front-end pivot, just like Márquez does now, to help beat everyone else. The only reason both men can do that is because they have the talent to delicately skate on super-thin ice, lap after lap.

Many people call this a natural talent. But mostly it isn’t. Such skills come from a lifetime spent on bikes, going round and round in circles for thousands and thousands of hours, mostly on dirt bikes, to hardwire that information into your brain and your body.

How long before someone learns to emulate Márquez’s front-tyre skills? Nobody knows: it could be next week, next year, next decade or maybe never. So just enjoy it while you can.