Over the past three decades I’ve seen many amazing riders do many amazing things. All kinds of moments jump out, from before Kevin Schwantz to after Casey Stoner – way too many to go into now, but here are three.

It’s September 1985, the season-ending San Marino GP at Misano, way before anyone had even dreamed of traction control. Randy Mamola is chasing Ron Haslam during practice, both of them aboard Honda’s superbly rider-friendly NS500 triple. The American is accelerating out of a left-hander when his rear tyre smears sideways and then grips. Suddenly the bike isn’t so rider-friendly and flicks him skywards like an ejector seat. When Mamola re-enters orbit his head just about thumps the front mudguard and both his legs land to the right of the bike as he runs off the track. He is now skating through the grass with both feet, his hands hanging onto the handlebars for dear life, while he waits for the bike to slow, because he knows he will crash if he tries to use the front brake.

Twenty-three years later and we’re at Phillip Island. Valentino Rossi is doing what he often did in those earlier, easier days: he has made an average start and is carving his way through the pack.

On lap four he’s chasing Colin Edwards and Shinya Nakano down the 200mph start/finish straight. Rossi swerves to the right, ready to do them on the brakes into Turn One. At this very moment he decides the front brake needs adjusting, which it does most laps at Phillip Island. As the brake heats up and cools down at various parts of the circuit, the hydraulic fluid does the same, which affects brake-lever position; hence the need for constant adjustment.

As Rossi levels with Nakano and Edwards his bike gets buffeted by the draft and his M1 breaks into a speed wobble. No worries; he takes his left hand off the handlebar and winds the remote brake adjuster knob a half turn or so, then sweeps past both of them. By the end of the race only Stoner lies ahead of him.

Rossi’s long-time crew-chief Jeremy Burgess explained Rossi’s ability to do such things thus, “Valentino’s reflexes and motor neurons are quicker than those of the other guys.”

JB never worked with Marquez, but I’m sure he would say exactly the same thing about him, but maybe more so.

As Cal Crutchlow once said, “Marc is like a cat that always lands on his feet.” And never more so than at Assen a few weeks ago.

Perhaps I’ve forgotten other miraculous MotoGP moments, but I’d rate Marquez’s save while braking into Turn One during Dutch TT practice as the greatest escape I’ve ever witnessed. I’ve never seen anyone lock the front like that and escape a purling, lacerating crash. 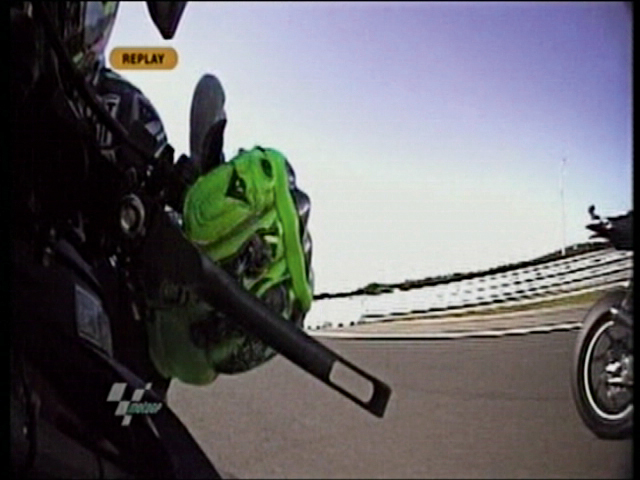 Any motorcyclist with experience and skill can lock the rear tyre without a care in the world, but locking the front and surviving to tell the tale without going home via hospital is very different. In the thick of my racing career I could squeal a road-bike front tyre for a good few yards, but that skill evaporated after I’d retired, resulting in a collision with a truck and a compound fracture of my right femur.

Marquez was rocking on for 180mph in fifth gear as he approached the first corner during Assen’s Saturday morning FP3 session. The very moment he hit the brakes the front tyre locked, creating so much smoke that some onlookers thought he had blown his engine.

In a millisecond the bike had flicked 45 degrees to the right and turned perhaps 40 degrees from the vertical. When the skidding front tyre finally gripped again, Marquez was kicked out of the seat, like a front-end highside. He landed back in the seat, both feet off the footpegs and somehow managed to keep it all together. Then he ran into the Turn One gravel trap, from which he extricated himself with a few big handfuls of throttle. A few hours later he referred to the moment as “as little bit scary”, as you or I might when we get a bit of a wobble on while crossing the centre line at the wrong moment.

I don’t think anyone else in MotoGP would’ve stayed on two wheels in that situation. Marquez did so because he lives on his wits. When he’s on a race bike he is constantly on the edge of disaster: overdoing it this way and correcting it, overdoing it that way and correcting it; always asking too much of the machine and then dealing with the consequences. I hope he never changes, because there’s nothing better than watching him dancing around on the edge of that precipice.

But why did his front tyre lock up like that? For a few different reasons.

Probably most importantly, today’s MotoGP bikes make so much torque that the front tyre barely skims along the track surface, even in fifth and sixth gears. Therefore there can be almost zero load on the tyre when the rider first squeezes the brake lever, so the tyre locks. It’s possible that the introduction of MotoGP’s unified software, with its more basic anti-wheelie system, exacerbates this problem.

Second, several riders have described how they can skid Michelin’s front slick on the brakes, which is something they never talked about during the Bridgestone era.

Third, the track seems to undulate in the turn-one brake zone, so it’s possible that the tyre unloaded across a crest, which is what happened two years ago when Marquez crashed at 209mph after crossing the brow towards the end of Mugello’s start/finish straight.

How to fix the problem? Michelin’s front tyre has already come a long, long way this season, but they need to look into this. Magneti Marelli also need to look at their anti-wheelie programme, which is currently the Achilles Heel of the control electronics.

Finally, and ironically, considering that the incident occurred on the very weekend Dorna announced wings will soon be banned, the factories need to do increase front downforce. Most factories had already worked on this issue before the advent of the current wings craze, by redesigning the fairing nose, so they will need to work more in this direction. Much will depend on how MotoGP writes the aero regulations for 2017 and beyond. Given the problem of front-tyre contact at high speed, the rules will need to be worded to allow some front downforce, but without the huge protuberances currently used by Ducati.