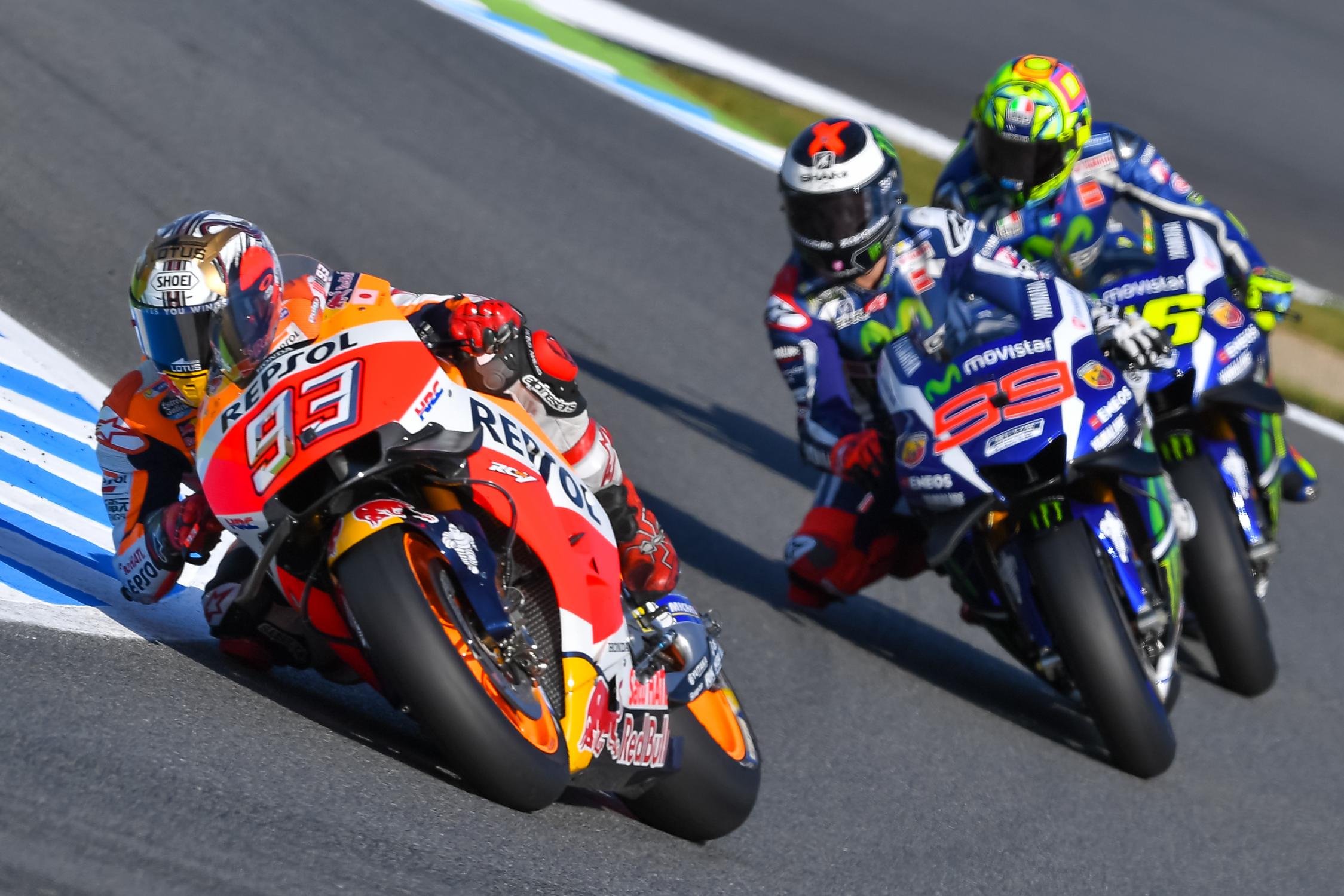 You would think that Marc Marquez will be under no pressure this weekend. The 23-year-old wrapped up his third MotoGP title in Japan last month, so presumably this Sunday’s season-ending Valencia Grand Prix will be a heroic homecoming, a chance to glad-hand his Spanish fans and enjoy himself, free of any real concerns.

Not quite. Marquez will be under some serious pressure from Honda, because while he may have won his title, he hasn’t yet won Honda its prize. Honda currently leads Yamaha by 21 points in the constructors’ world championship, so it’s not over yet.

The MotoGP constructors’ title is much less famous than its equivalent in Formula 1, but you don’t need to be Einstein to understand why it’s a much bigger deal to the manufacturers than it is to most fans. Unlike Formula 1, MotoGP doesn’t follow a fully metered payment system to the teams so the difference between first and second in the teams’ championship is probably zero. The money passed down by Dorna is also pittance in comparison, but it’s not about that, it’s about the competition…

Despite its relatively low-key status, motorcycling’s constructors’ prize has as rich a history as its riders’ prize.

This is how the FICM (forerunner of the FIM) announced the birth of world championship Grand Prix racing shortly after the end of the Second World War. “Commencing in 1949 the FICM will award the title of WORLD CHAMPION to the most successful driver (sic) and to the most successful manufacturer.” In other words, from the very beginning the sport offered equal-status awards to the top rider and the top manufacturer.

Since 1949 Honda has won more 500cc/MotoGP constructors’ championships than anyone else: 21 titles, compared to the 14 won by Yamaha, who is yet to match MV Agusta’s 16 titles, the last of which the Italian marque won way back in 1973.

The constructors’ points-scoring system is different to the riders championship system. The numbers are the same: 25 points for a win, 20 points for second place, 16 for third and so on, but only the first bike home of each manufacturer scores any points. Thus at Sepang two weeks ago, Ducati scored 25 points for winning the race, Yamaha took 20 for Valentino Rossi’s second place and Honda got eight points for Jack Miller’s eighth place, making Honda the lowest-scoring manufacturer of the day, behind Aprilia (Alvaro Bautista in seventh) and Suzuki (Maverick Vinales in sixth). 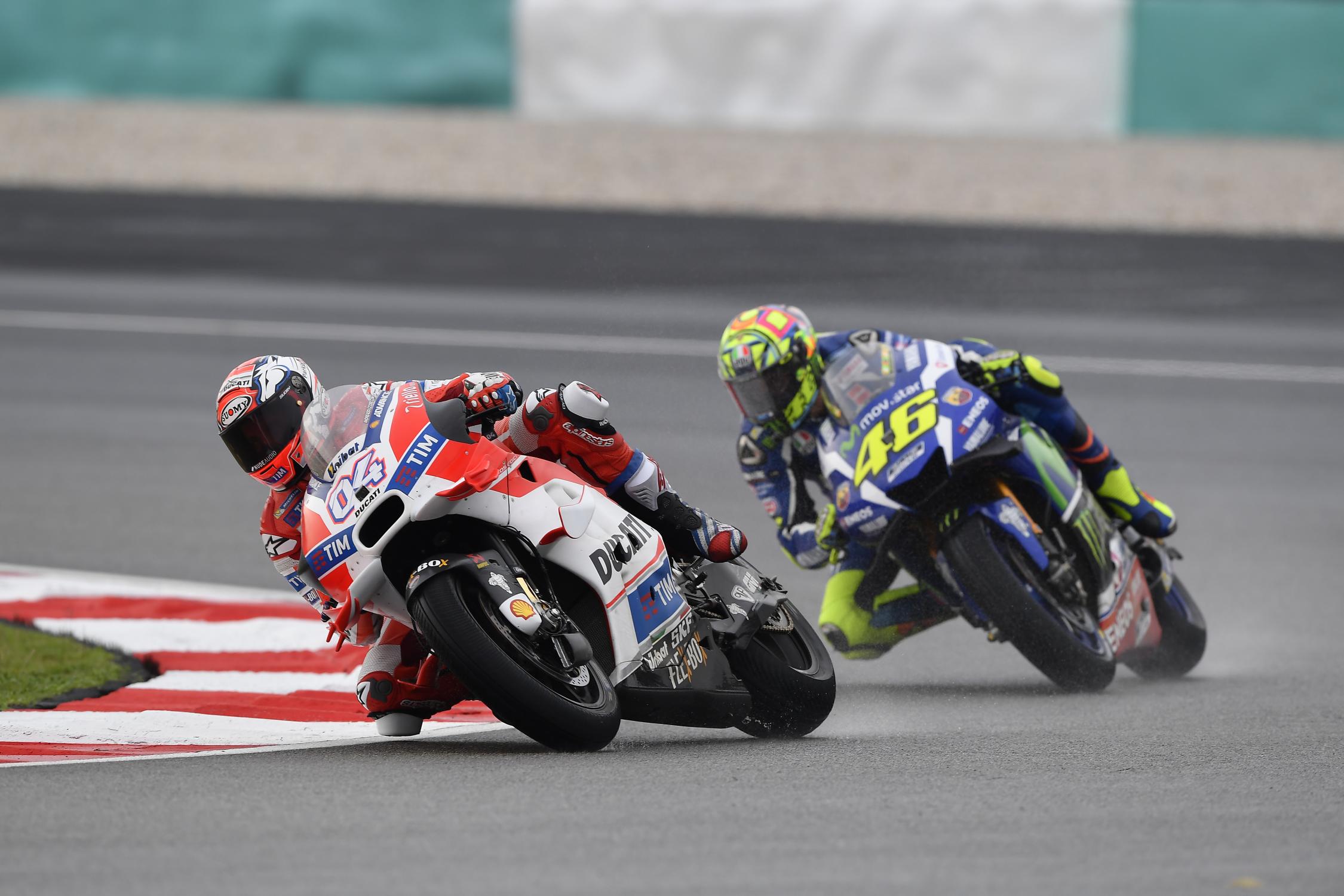 Now perhaps you can understand why Marquez and the gentlemen from the Honda Racing Corporation will be a wee bit twitchy at Valencia. Honda is favourite to win its 22nd constructors’ title, because it will take an even worse race than Sepang for Yamaha to move ahead, but the title would already be Honda’s if Marquez had finished in the top four last time out. Thus there will plenty of pressure on the youngster: he may have won the riders title in Japan but then he crashed in Australia and Malaysia, so he needs to make up for those mistakes.

It’s not only the constructors’ title that’s at stake this weekend. Repsol Honda had led the teams’ championship for much of the season, putting Honda in line for MotoGP’s cherished triple crown. But Marquez’s accidents and Dani Pedrosa’s absence (after he broke his right collarbone and left leg at Motegi) have allowed the Movistar Yamaha team to sneak ahead. Repsol Honda is now 10 points behind the factory Yamaha squad, so Marquez needs to win on Sunday if his team is to have a realistic chance of taking the championship. The teams’ title may not mean much to you, but it means a lot to the team.

And there’s more. If Marquez (or anyone else not riding a YZR-M1) wins the season finale, then Yamaha will have gone 11 Grands Prix without winning a race. The last time the company did that was in 2014, so there’s plenty at stake this weekend for both Honda and Yamaha.

Of course, if Honda does secure its 22nd constructors’ championship it won’t be all Marquez’s work. If it wasn’t for Cal Crutchlow’s two wins at Brno and Phillip Island and Pedrosa’s Misano victory, all of which left Rossi in second place, Honda would be in a much more precarious position. It should be noted that Miller’s Assen win doesn’t count for the constructors’ title because Marquez finished second, so Honda would’ve taken the 25 points anyway. 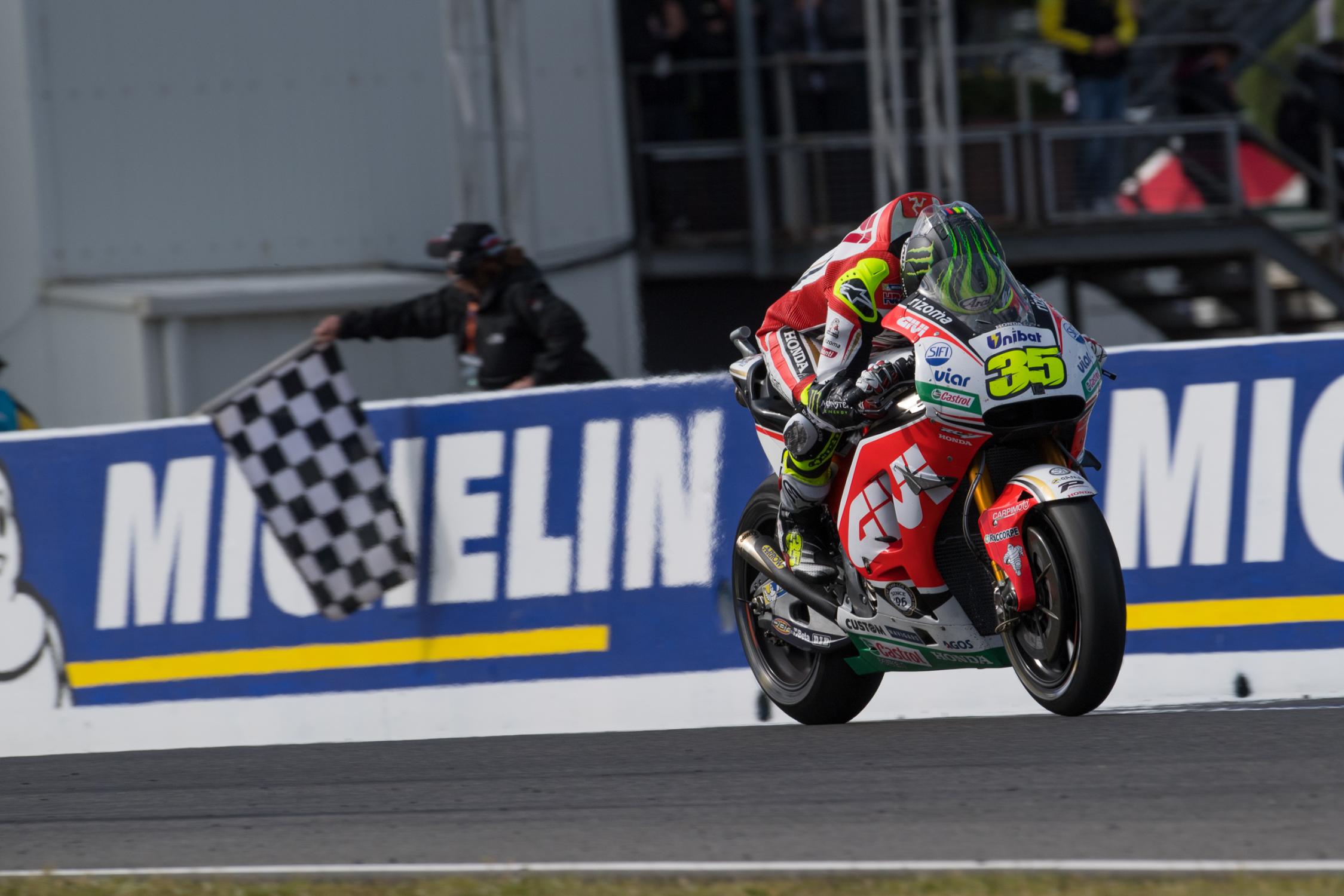 What Crutchlow’s 50 constructors points prove is that a manufacturer needs strength in depth, so that when its prize fighters fall, there’s someone else to pick up the pieces. It’s no surprise that some of Honda’s strongest seasons in the premier-class constructors’ series came during those years when the NSR500 two-stroke and the RC211V four-stroke dominated the grid, so that whatever happened in a race there was always another Honda up front.

Suzuki’s lack of strength in depth proves the same point. Since the late 1980s the factory has only put two bikes on the grid, so even though Kevin Schwantz won the riders’ title in 1993 and Kenny Roberts Jr in 2000, Suzuki hasn’t won the constructors’ title since 1982, when its RG500 two-stroke dominated the grid.

The inaugural 1949 constructors’ crown was won by British company AJS, with its E90S Porcupine, the only twin-cylinder winner to have won the riders or constructors’ championships.

The Porcupine was created during the war by British engineers working in their spare time, as a distraction from armaments work. They designed the engine to be supercharged, because the fastest pre-war machines (BMW’s twin and Gilera’s four) were supercharged.

Supercharging gives more power, which means more heat, hence the mass of spiky cooling fins that gave the Porcupine its nickname. AJS even considered casting the cylinder head in silver, for maximum heat dissipation. But after the war the FICM banned supercharging, partly for cost reasons and partly due to the lack of high-octane fuel necessary for supercharging. The ban is still in place today.

AJS should have scrapped its engine and started again from scratch but they didn’t want to spend the money (a recurrent theme in the Britain’s post-war motorcycle industry), so its engineers were given the nightmare task of converting an engine designed to be low-revving, low-compression and high-boost into a normally aspirated engine, with higher compression and more revs. 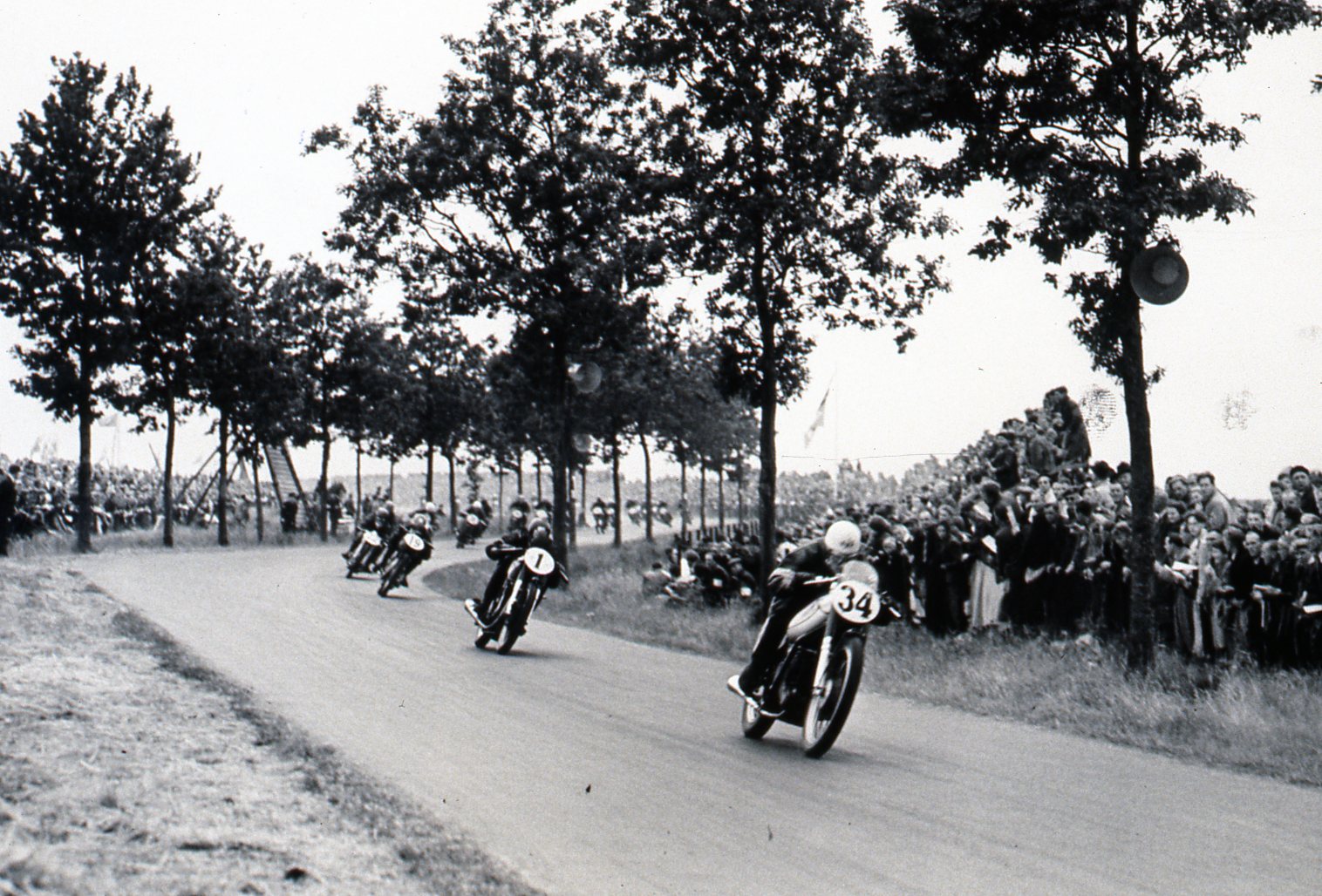 The first converted Porcupine engine (a sow’s ear from a silk purse) made a rather pathetic 29 horsepower, but by 1949 it had 49 horsepower, enough to help former RAF bomber pilot Les Graham win the riders title and AJS to take the constructors’ prize, thanks to Graham and team-mate Bill Doran winning three of the six Grands Prix.

AJS beat Gilera – who also used an unblown version of a previously blown engine – to the title by just one point. It should be noted that Gilera’s transverse four was the blueprint for all transverse fours, including Yamaha’s M1 and Suzuki’s GSX-RR.

Neither Graham or Doran had happy endings to their race careers. Graham lost his life during the 1953 Senior TT, when he crashed his ill-handling MV Agusta at the bottom of Bray Hill, while Doran suffered career-ending head injuries two months later at the French Grand Prix at Rouen. The previous summer Doran had broken a leg when he crashed at a fast left-hander on the Isle of Man. The corner was subsequently named Doran’s Bend.