How much does it cost to get into Grand Prix racing? If you need to ask, you probably can’t afford it

I assume Jack Miller’s post-Assen party is just about over now and that he’s back down the gym, pumping iron like a good lad. 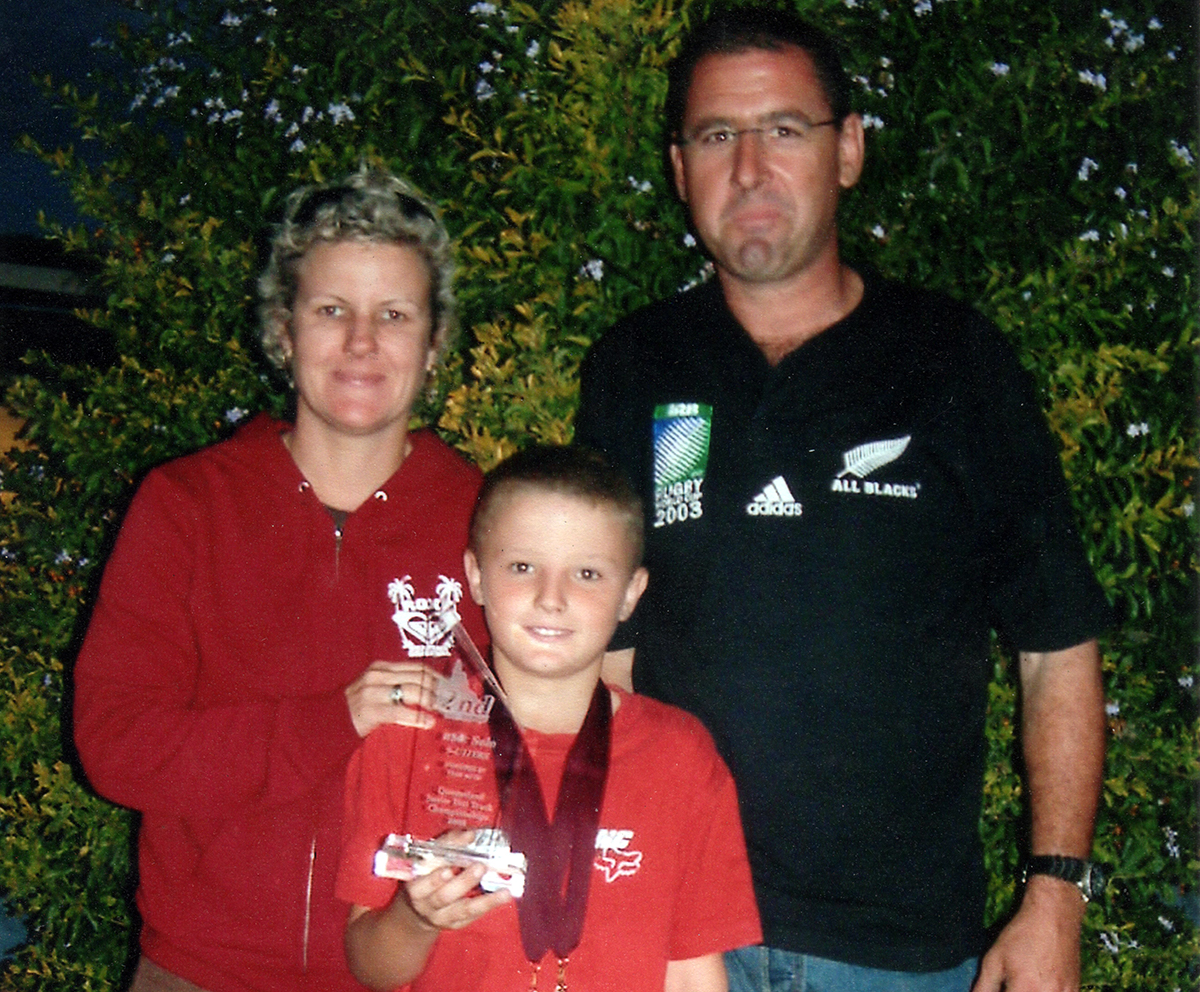 Miller, like many other Aussie battlers before him, has the knack of burning the candle at both ends: working hard and playing hard. And you may have noticed that whenever he has a good day at work he likes to thank his parents for what they’ve done for him.

The amount of money spent by the Miller family to get their son into the lower reaches of Grand Prix racing is eye-watering. The same goes for Wayne Gardner, the former 500cc world champion, who reckons he’s spent £1.5 million on the careers of sons Remy and Luca.

Miller’s parents Sonya and Peter mortgaged their house more than once to fund Jack’s big adventure, which started when the former dirt tracker and motocrosser arrived in Europe in 2010, after just a few races back home on a Honda RS125.

“Dad built a trailer that slotted exactly into a 40-foot sea-freight container,” recalls Miller, who was 15 at the time. “We packed my two Hondas, a toolbox and all our living stuff, then when we got to Europe we bought a motorhome and hooked up the trailer. We lived in caravan parks and spent a lot of time living at racetracks – Cartagena for a while, then Almeria. We had one bike set up as a race bike – fresh pistons and tyres – and the other as a test bike, with second-hand pistons and tyres. I’d only done 1800km on a roadrace bike, so I’d ride every other day, paying 50 bucks to join track days. It was cool, diving through all these guys on streetbikes! But that year was fucking dear – moving house and everything cost us at least 220,000 Aussie dollars.” 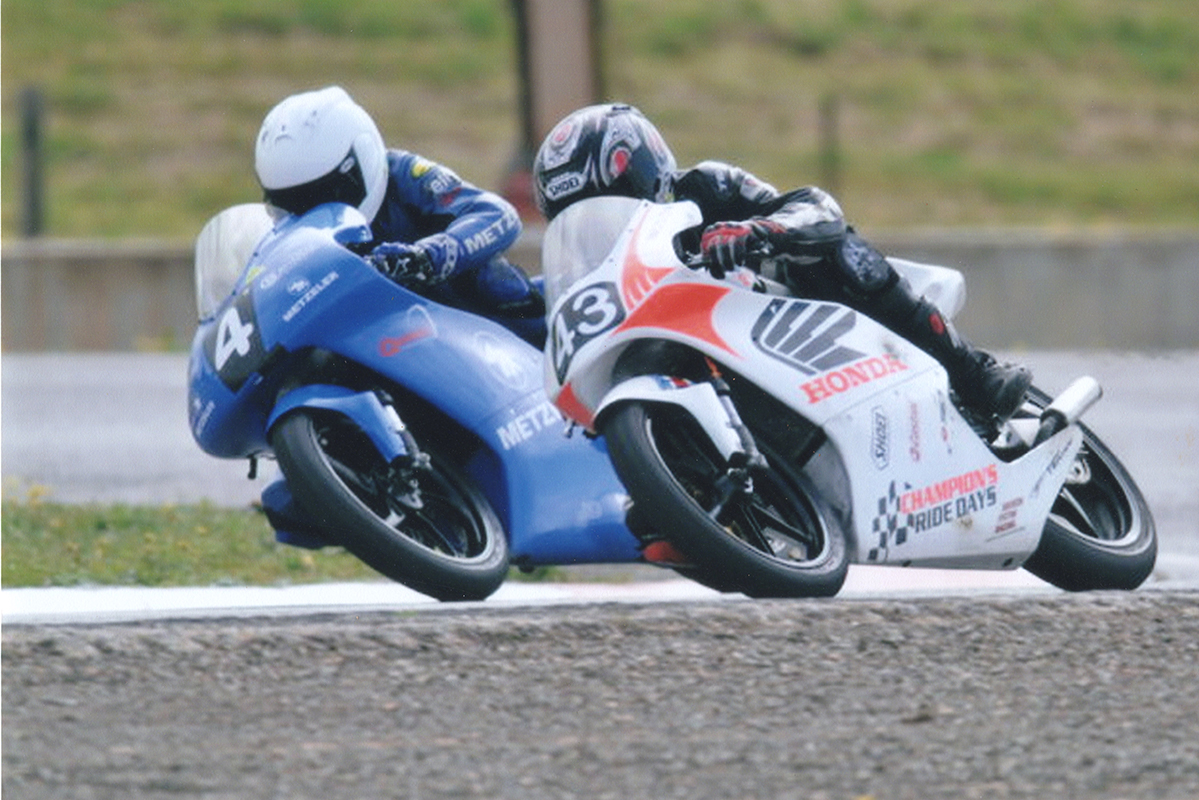 The Millers travelled the length and breadth of Europe like gypsies, just as their Aussie forebears had done in the 1950s, 1960s and 1970s. From Spain to Germany and the Czech Republic they learned along the way and made friends at every turn. It was only a matter of time before someone noticed Miller’s talent. That finally happened towards the end of his first season in Europe when a German team asked him to contest the last two rounds of the Spanish CEV (Campionato Espagnolo Velocità) series.

“We had to pay for that, of course. We stayed with the same team for 2011, which cost us around 70,000 Euros [£59,000], doing the CEV and IDM [German championship]. I won the German championship and got a call from the Caretta Technology team to ride the last few 125 GPs of the season.

“That was about 7000 Euros [£5900] a race, which was fucking expensive for the shit bike we were on. We got conned into going with them the next year, the first year of Moto3. So we signed a deal and we went with the Honda, but then everyone else changed to the FTR chassis. We were promised the world by the team and we paid through the arse; 250,000 Euros (£210,000), which was the biggest waste of money ever. My parents mortgaged the house for that – so I knew that was my one shot. The bike wasn’t what we wanted and my dad was ready to strangle the team owners. It was a shit year and by the end of 2012 I thought it was all over.

“Then Dirk [Heidolf, former GP rider and owner of the RTG team] offered us a ride for 2013 – a little cheaper and his Honda was better. Dorna and IRTA chipped in, so we paid about 175,000 Euros [£147,000]. My dad mortgaged the house again and by the end of the season we had ran out of money, so my aunties and uncles were chipping in. What we did that year was enough to get us the KTM deal with Aki Ajo, which was my first free ride!” 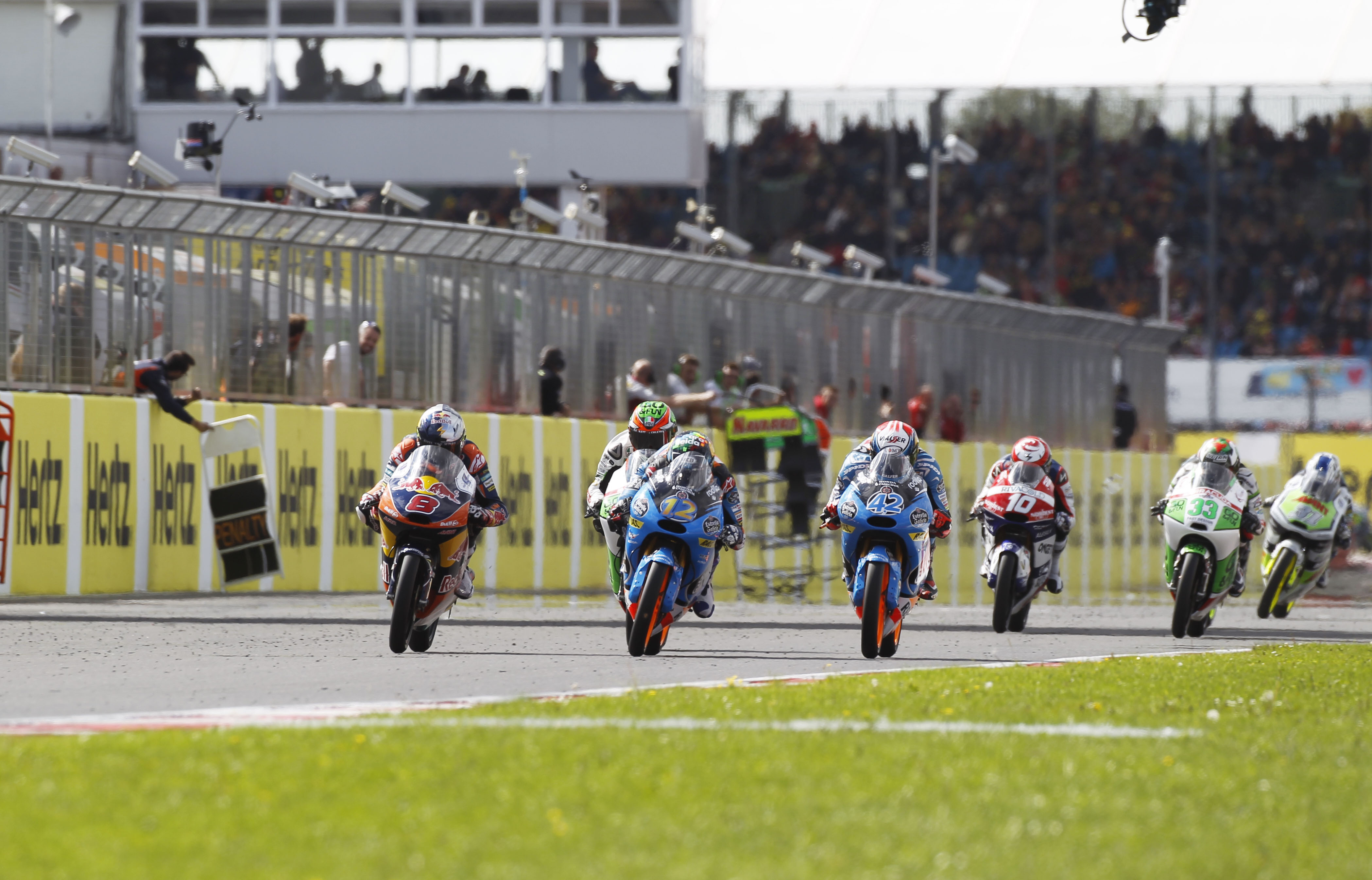 Miller led the 2014 Moto3 series, only to miss out on the title at the last round by two points. Honda’s Shuhei Nakamoto and Livio Suppo had already spotted his talent while he was riding the little Honda in 2013, so in May 2014 they signed him for an unprecedented three-year MotoGP deal. So, after spending towards a million Euros it all turned out well for Jackass. But what about the next generation of Americans and Aussies, how does Miller think they can make their way into the big time?

“For Australians the only way you can do it is by getting out of Australia,” he says. “Okay, they’re trying to build up the Australian championship and do the right thing, but the competition there isn’t like it is here. I’d won a few races in Australia on the Honda, then my parents said what’s the point of spending the money here, just so we can say we’re Aussie champions, when we could spend quite a bit more and be a small fish in a big pond and actually learn stuff?

“Now I’m here I know how hard it is. The only way is to get to know people and be willing to spend money. The thing is there’s some great guys, like Mark Keen of KRP in England, who we met on our travels. If we’d known him before we came over, that would’ve made it a lot easier. We did it our own way because we didn’t know anyone. Wayne [Gardner] has done it differently with his kids because he had a foot in door.”

Gardner became the first Australian to win the 500cc title in 1987. He arrived in Europe at the beginning of that decade when racing was very different.

“I bought a plane ticket and came over with a thousand dollars in my pocket,” he says. “You jumped on a plane, dragged a bag along, slept on people’s floors and hitchhiked around to meet people and plead and beg and crawl to get on bikes to show your skills. But those days have gone…

“The whole show has changed since those days; in some ways for the better and in some ways it’s not so good. The costs have escalated by five or six times. Trying to find sponsors to keep up with that is difficult. A lot of teams can’t find the sponsorship so they’re asking riders to bring sponsors or they’re asking parents to pay. The amount of money it takes is just astronomical; you’re talking 250,000 Euros [£210,000] for a half-decent Moto3 ride in the CEV championship! And it costs a hell of a lot just getting to that level.” 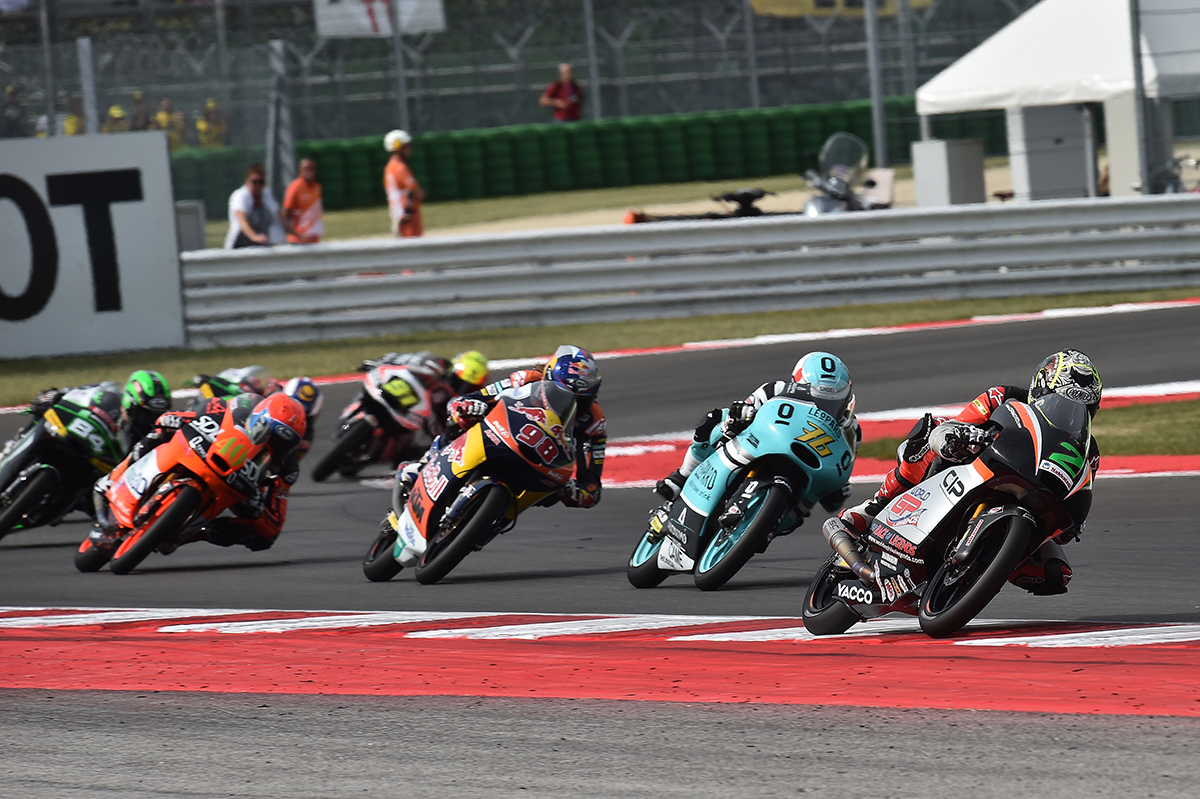 Gardner realised some years ago that the only way to give sons Remy and Luca a chance of making it to the top was to leave Australia and set up home in Spain, the cauldron of modern racing talent.

“You can’t do it like I did anymore,” he adds. “You can’t drop into Europe at 18 or 19 – you’ve got to start at a young age. Casey Stoner left Australia because he couldn’t roadrace until he was 14. I realised all that, so I came to Europe to have a look and I was, like, Jeez, look at what they’re doing here. If an Australian comes here now they’re five or six seconds off the pace, as Remy was to start with, so you’ve got to come here early to build your pace before you get to the point where you’re ready for CEV. I think I just made it with Remy, though we should’ve come over a year or two earlier.

“Luckily Remy has worked at it and he’s on the money now, but Jesus, it’s taken a lot of hard work and a lot of money, because you’ve got to feed these teams with money or sponsors, you’ve got to keep pumping the money in. Kenny [Roberts, three-time 500cc World Champion] told me you’re going to spend two million dollars. I said, no way, but he was right.

“Let’s say you’re an eight- or nine-year-old kid in Australia showing some ability – you’ve already missed a few years compared to the kids in Spain, and then how do you find the money to come to Europe because you’ve got the cost of uprooting the family, plus the parents will probably have to give up their jobs? So you’ve got to cover all that, plus four or five years of racing at 250,000 Euros a season, plus all the family’s living costs, before you even get to GPs.”

Last month Miller won his first MotoGP race and Remy Gardner rode his first Moto2 Grand Prix. Combined cost of getting them both to where they are now? Over £2 million. So start saving…