The much-hyped Márquez/Viñales title fight is turning out to be the weirdest in GP history. Here’s why… 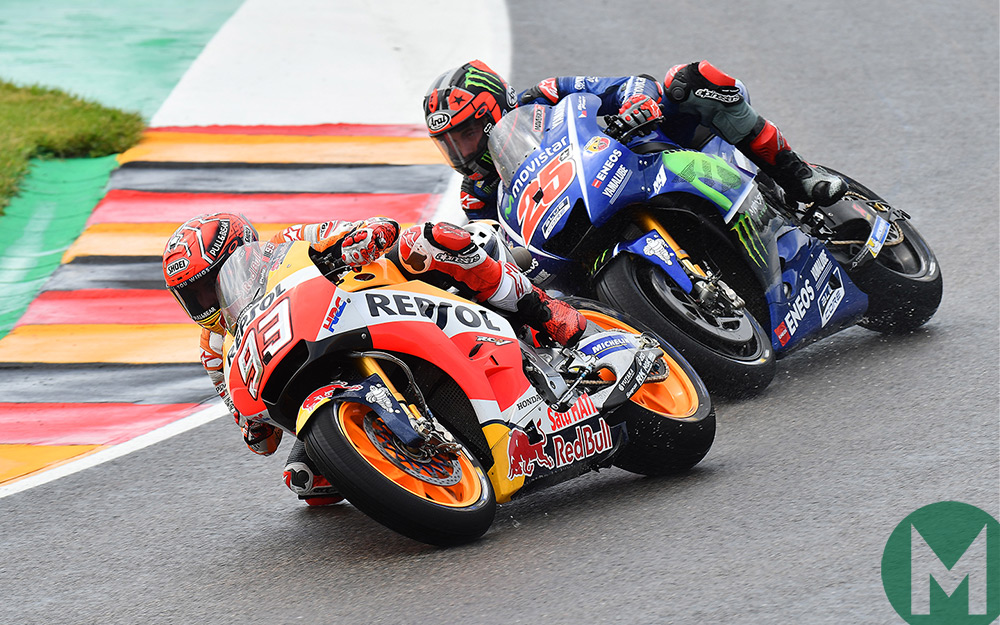 Remember all that preseason hype? This was going to be the year of a new duel, a new rivalry to follow Marc Márquez versus Jorge Lorenzo and Valentino Rossi versus Casey Stoner.

Márquez and Maverick Viñales were the new duellists, battling for the 2017 MotoGP title from start to finish.

And they’ve hardly been on track together – not once have they fought for victory. About the closest they’ve been all year was during qualifying on Saturday when they had a little coming-together (above). They had seen so little of each other recently that they took the opportunity to have a little wave at one another.

All this proves is that 2017 is the topsy-turviest championship in years, perhaps ever. And the man who best copes with the confusion will be the 69th premier-class world champion.

At the start of the season it looked like Viñales might walk it. He won the first two races but then crashed at COTA, and struggled to sixth and 10th at Jerez and Barcelona, floundering around with no grip. And then he crashed again at Assen.

By the time we got to Germany, a few days after his Assen tumble, Viñales seemed a changed man. Usually he is quiet, polite and entirely at ease in the hubbub of the paddock, even if there’s a hint of the Casey Stoner about him, that he would rather do without all the fuss. Last weekend he looked rattled and frustrated.

He didn’t handle his press debriefs so well; smiling all the way but refusing to answer questions about which frame he was using on his Yamaha YZR-M1. Then he had a few words with a Magneti Marelli electronics technician and later suggested he might take revenge for the Márquez collision.

Viñales has been distracted by the introduction of Yamaha’s new frame, which is an amalgam of the 2015 frame (which Rossi and Jorge Lorenzo used last year) and the better points of the 2017 frame. Rossi prefers this new unit, while Viñales prefers the old. But because Yamaha haven’t had time to fabricate two new frames, Viñales and Rossi have one of each. This greatly complicates the job of set-up, because riders can’t make back-to-back comparisons. It has also muddied the atmosphere between the two riders. 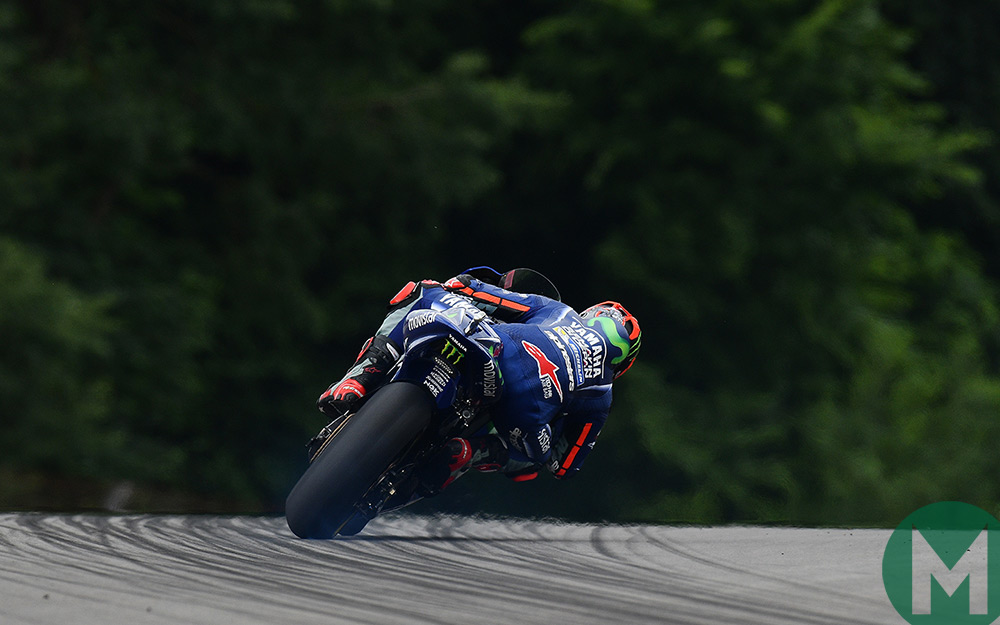 One wonders why Rossi doesn’t get both new frames while Viñales keeps both old frames, “the one I built for my style”. Anyway, by Brno next month both riders should have both their bikes fitted with whichever frame they prefer.

After Sunday’s race Viñales told us he wasn’t allowed to reveal which frame he used, so I asked Yamaha’s MotoGP managing director Lin Jarvis, who told me he raced the new frame. But Jarvis spoke with a wry smile, which may have been a hint that he wasn’t telling the truth. Japanese factory culture demands that new is always better, so they never like to admit that their latest creation isn’t an improvement. Confused? We all are.

All good racers are control freaks – from which tyre they want to race to which pair of gloves they want to wear – so when they can’t control what’s happening they get mad.

In Germany Viñales was again destabilised by the grip issues that have haunted him on and off since the start of the season. This problem, which depends on rubber compounds, track layout and the weather, has exacerbated problems with electronics set-up. When he runs out of traction his electronics engineers try to reduce wheelspin by turning up the traction control, which reduces torque, so he gets killed on acceleration.

The big thing, of course, is that this is the first time Viñales has been in the MotoGP championship pressure-cooker.

I thought Viñales would be cool enough to compartmentalise all the conflicting demands, allowing him to meet and greet sponsors and deal with idiot journalists, while keeping his mind focused on getting everything in place for the race.

I hope that right now he is sat on a plane, jetting away for a few weeks of R&R that will allow him to disengage, think and reset his brain in time for Brno. He needs to understand that this is a very complicated season when you don’t always get what you want, let alone what you deserve.

Viñales’ composure in Germany contrasted dramatically with Márquez’s. While Viñales came out fighting at the start of the year, Márquez had a miserable first two races: off the podium in Qatar and in the gravel in Argentina. 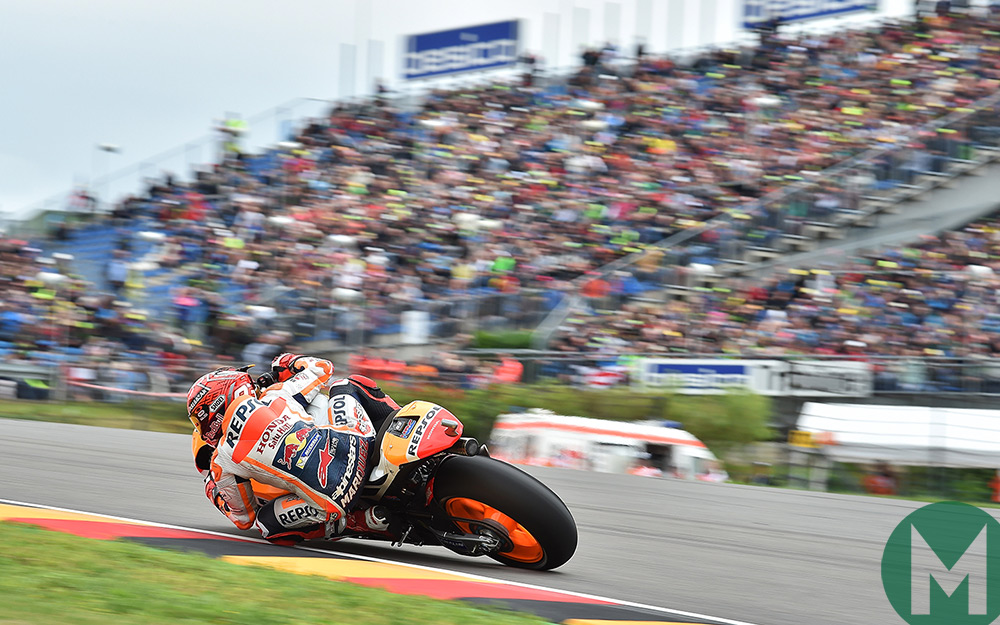 But unlike Viñales, Márquez has been here before. He may only be two years older but this is his fifth season of MotoGP and he has experienced the highest of highs and the lowest of lows. In 2013 he won his rookie campaign, the first since ‘King’ Kenny Roberts. The following year he won 10 consecutive races, a feat achieved only by Mick Doohan, Mike Hailwood, John Surtees and Giacomo Agostini. On the other hand, he has crashed 69 times, including that 209mph get-off at Mugello, and has suffered the horror of the that end-of-2015 nonsense.

Márquez has pretty much seen it all. Viñales has crashed out of two races and still seems perplexed and annoyed. Márquez has also crashed out twice, but quickly put both accidents behind him.

The 24-year-old knows better than most that this is what you must do with the Michelins. When you’re not getting the right feeling from the front you back off a fraction and bring the bike home, settling for a third, fourth or fifth-place finish. But when the front feels right, you make the most of it and take home 25 points.

Márquez rarely stops laughing, both in public and when he’s with his team. His attitude – learned the hard way – is to enjoy himself. He admits that last year the pressure was almost intolerable. He had lost the 2015 title due to his own mistakes and he wanted to make amends with Honda by winning the 2016 crown. He has the same pressure this year but he deals with it by maintaining a more light-hearted attitude. It was the same on Saturday. When Viñales expressed anger about their collision, Márquez laughed it off.

Then again, Márquez had good reason to be happy in Germany. Whenever he arrives at an anti-clockwise track he knows he’s one step ahead. He loves turning left, which is why he’s unbeaten on his last eight visits to the Sachsenring, across the 125cc, Moto2 and MotoGP classes. He has a similar record at other anti-clockwise tracks like COTA and Indianapolis, where he has won his last 10 races, and at Laguna Seca, where he is the only rider to have won on his first visit.

Márquez likes going left because he spends more time on dirt-track bikes, grinding out anti-clockwise grooves, than he does riding MotoGP bikes.

More important right now is Márquez’s attitude to take everything as it comes: accept a lowly result with a smile and wait for a better day. That’s what Viñales needs to do if he is to keep his title bid alive.