Next year MotoGP gets its first new world-class championship in more than half a century, but the electric MotoE series must sound great 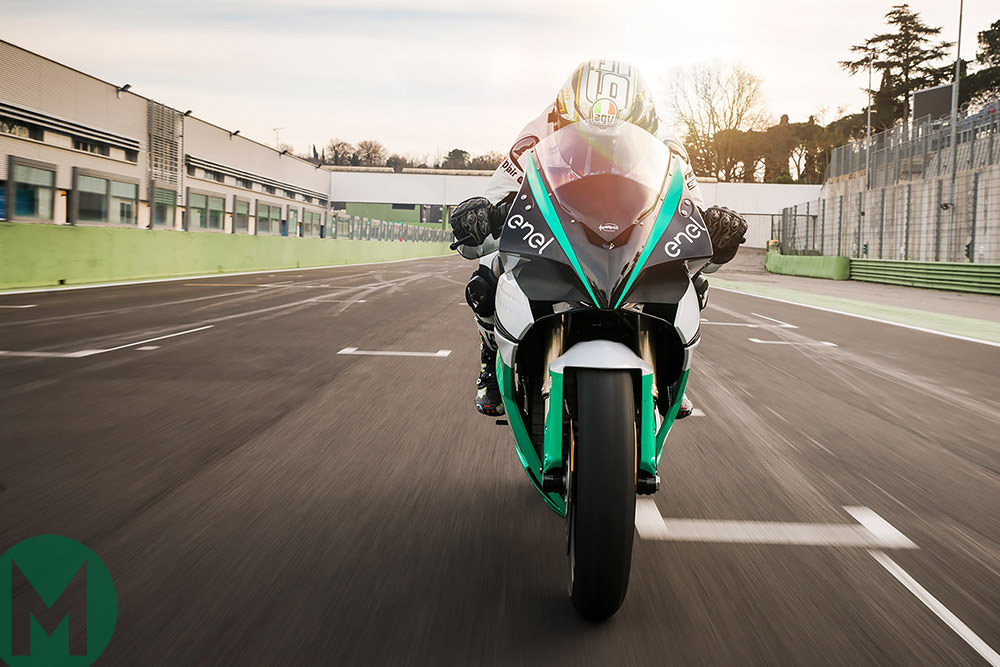 Within the next few months MotoGP fans will see a MotoE machine ride a few demo laps at a Continental Grand Prix: perhaps Jerez, Le Mans, or most likely Mugello, because both MotoE’s Energica motorcycle and the series sponsors Enel are Italian.

So far the MotoE World Cup hasn’t got fans agog with excitement, mainly because an electric motorcycle race doesn’t involve a quarter of million earth-shaking petroleum explosions. In other words, MotoE is too damn quiet, for the moment, at least.

But the championship is hugely significant in all kinds of ways. MotoE is Grand Prix motorcycling’s first completely new world-class category since the 50cc class born in 1962.

It also an important pointer to the future: governments across the world are calling time on the internal combustion engine. These announcements cause much wailing and gnashing of teeth among purists, but nothing is forever. Once gas-powered bikes leave the roads, how much longer before they disappear from world-class meetings to find sanctuary at classic events, where oldies like you and I will go to sniff the petrol fumes, just like today’s oldies romance about the whiff of Castrol R?

MotoE had its official launch in Rome last week, but I think a trick was missed. Dorna could have nicely linked the future with the past by staging the launch a few miles further down the River Tiber at the Circus Maximus, where two thousand years ago the Romans raced four-horsepower chariots around a 600-metre course in front of 150,000 spectators.

Many petrolheads hate the very idea of electric racing, firstly because the bikes don’t make enough noise and secondly because they’re not fast enough. They are wrong on the second point: the fastest electric race bikes make well over 200 horsepower. Indeed MotoGP’s director of technology Corrado Cecchinelli believes that a top-of-the-range electric race bike could already beat a MotoGP bike over a single lap, using a short-life battery.

Perhaps the most exciting thing about electric race bikes is their dramatically upward curve of performance. The only electric bike race worth talking about – the Isle of Man’s Zero TT – got underway in 2009 with a lap record of 87.4mph. The lap record now stands at 118.4mph, thanks to multiple winners Mugen, the go-ahead company owned by Soichiro Honda’s son. If superbikes had improved at the same rate, the outright TT lap record would now stand at 189mph. 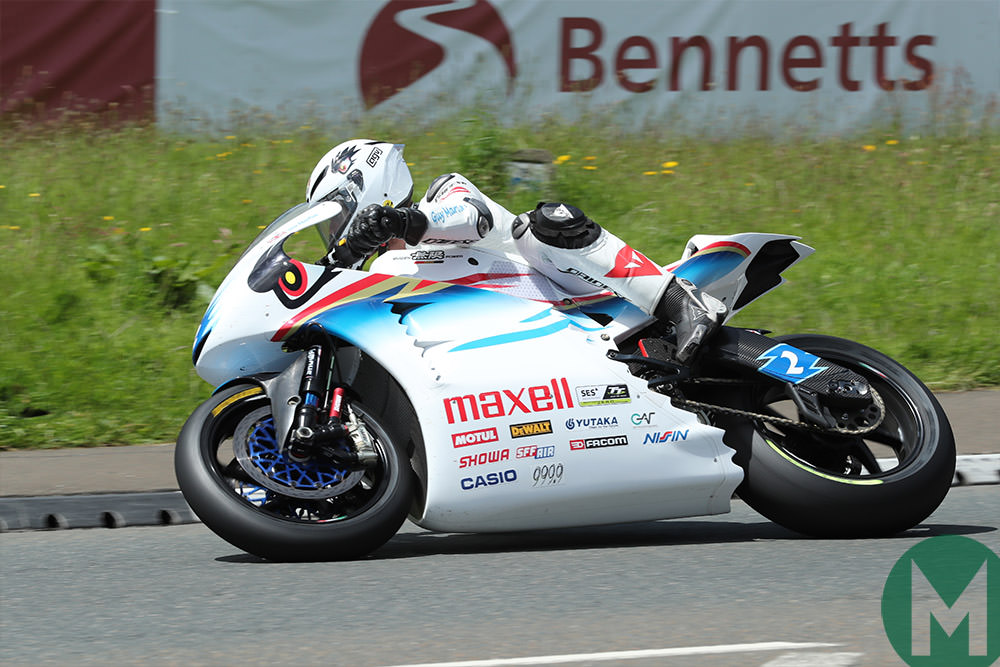 In other words, electric race bikes are improving as rapidly as internal combustion engine race bikes were a hundred years ago. Except this time it’s not the motor that needs improving, but the fuel, or rather the way the fuel is packaged. Battery weight and performance are the main areas of development.

However, an electric bike is already many times more fuel efficient than a conventionally powered bike, which doesn’t only waste energy through its reciprocating engine, gearbox and so on, but also through the transport and refining of the fuel, which is pumped out of the ground thousands of miles away, shipped halfway round the world, trucked around the country, put back in the ground and then pumped back out again.

But this isn’t getting you excited, is it? Practicality isn’t really what racing is all about; it’s about drama and noise.

I think noise is the biggest concern for MotoE. Dorna and Energica seem to have decided that the soundtrack of the championship should be the electronic zing of their racer, which is halfway between a kitchen whisk and a Light Cycle from the movie Tron. They say that 18 of these bikes will make a fascinating, intriguing noise.

This may be true, but I’m not sure how fascinating and intriguing this noise will be to a crowd of one hundred thousand MotoGP fans, of which 99,999 will crave the fumes and resulting commotion.

Noise – and lots of it – is a huge part of motor sport. That’s why Dorna increased the maximum noise limit several times during the early years of MotoGP. Fans want race bikes to sound big and scary, so I think Dorna might be making a grave mistake launching an electric bike series that will sound anything but big and scary.

Perhaps each bike should beat out a favourite bassline: Kashmir by Led Zeppelin, Rapper’s Delight by the Sugar Hill Gang or Power to the People by Public Enemy.

Even better would be to map the sound of the world’s greatest race bikes into the MotoE machines – everything from Manx Nortons and MV Agustas to Yamaha TZ750s and Honda RVF750s, gear changes included; so you’re magically combining the future and the past. That’s my idea and Dorna can have it for free.

I think it’s too soon to go with the electric zing and nothing else. Perhaps a Tron Light Cycle noise would work at some time in the future, but right now people want race bikes to make some noise. This is surely one reason why earlier attempts at creating an electric world championship failed. In 2013 the FIM organised a nine-round eRoad-Racing World Cup. No one was interested, so the series didn’t even last the season.

Dorna needs to make sure that MotoE doesn’t turn off current MotoGP fans, so the company needs to get this right first time.

Dorna has been working towards MotoE for a while. Former world champion Loris Capirossi tested several electric bikes last season: the American Lightning at COTA before April’s Americas GP, the Belgian Sarolea before the Aragon GP and so on. Dorna also approached Mugen, but Mugen’s Shinden race bike costs far too much. Dorna drove a hard bargain with MotoE: it wanted a full grid of bikes for three seasons, for nothing. The Energica/Enel tie-up presumably provides the economic viability that none of the other companies could manage. 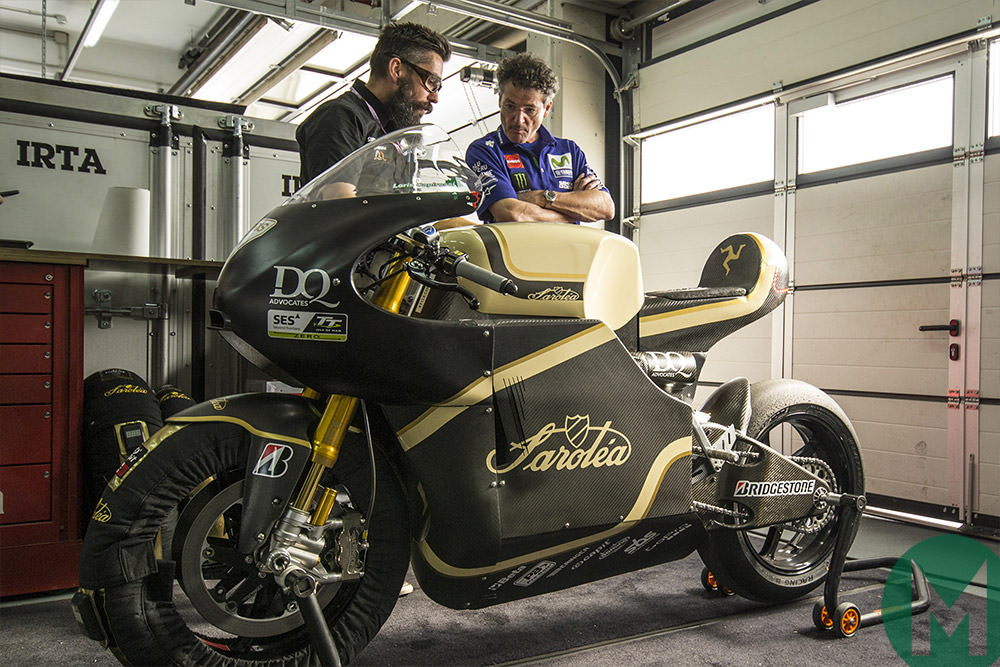 Dorna had various other stipulations on performance: power, speed and weight. The Energica makes 147 horsepower and can do 155mph (250km/h), which is a good starting point, but its weight is a concern. Dorna originally wanted its MotoE bikes to weigh less than 200 kilos, but the Energica will weigh closer to 250 kilos because batteries are heavy. There’s a safety issue here. We all know that the greatest danger in MotoGP is being hit by another motorcycle. Having a MotoE bike land on top of you will feel like having three Moto3 bikes land on top of you.

But you have to start somewhere. Performance should increase and weight decrease as Energica get to grips with the project. Dorna hopes to charge the bikes on site, via solar panels, which will most likely charge batteries that dump-charge the bikes. All this will get better and better.

Electric bikes are already great. I recently borrowed a Zero DSR, just to get a feel for this different kind of power. The Zero is excellent, especially around town, where the constant torque from the first touch of the throttle and the lack of gear changes transform city riding. When you shut the throttle of any motorcycle, the bike drops over; when you open the throttle, the bike picks up. We are all used to riding with internal combustion engines, so we sub-consciously make allowances for the way these engines build torque. We open the throttle in a certain way to compensate for the shape of the torque curve. No need to do that with an electric motor – all the torque is there immediately – which gives you much better control.

The American-made Zero has two performance maps: standard and sport, although you can add custom maps. First time I switched to sport mode and accelerated away from a traffic light I clicked the right scaphoid bone I broke 25 years ago. That made me wince, but the acceleration combined with the lack of noise and gear changes made me laugh: I felt like I was in a sci-fi movie. 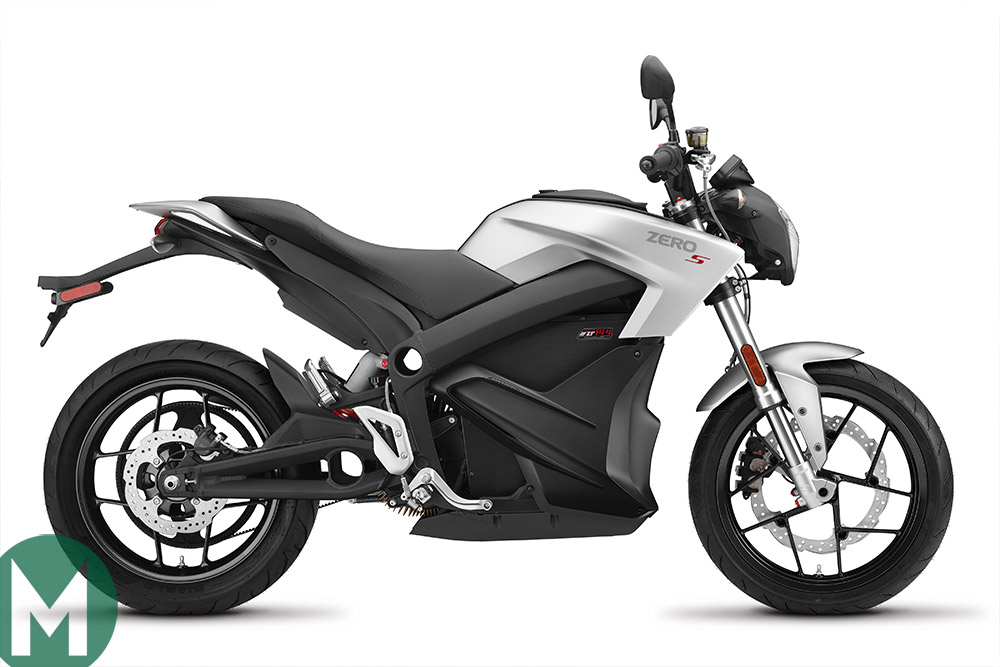 Alta electric motocross bikes – also made in America – are already winning supercross against gas-powered bikes, largely because they get into the first turn before everything else.

Electric bikes have all kinds of advantages. Their lack of noise will become increasingly important as expanding towns and cities threaten the existence of more and more racetracks. This has already made them popular in shooting movies, where they are used as camera bikes: no noise, no gear changes to upset the camera angle and they can be used indoors, thanks to the lack of local emissions. They are also taking over from conventional camera bikes in sports competitions like the Tour de France: much better to pedal up a mountain behind an electric bike than a Kawasaki GTR1400.

There will be 18 bikes on the 2019 Moto2 grid: seven indie MotoGP teams will get two bikes each and four Moto2 and Moto3 teams will get one bike each. The races will take place before the Moto3 race and will be short, less than ten laps at most tracks because both time and battery life will be limited.

It is the future. Some of us might not like it, but we may have to get used to it and it may not be so bad after all. Just make sure that MotoE bikes sound great, so that the MotoE race doesn’t become the time when fans queue up for their burgers.

MotoGP’s new safety officer and likely new permanent steward are the nephew and his partner of the Dorna CEO, whose children already play leading roles in the championship. There’s a simple word for running a business like this…