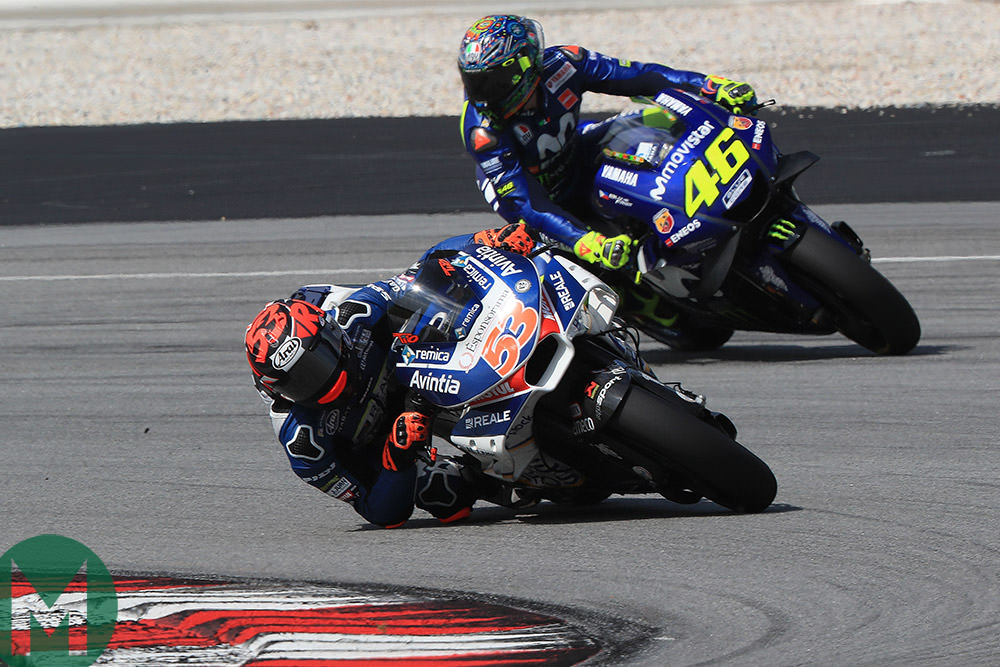 Motorcycle racing has always been about walking a tightrope. For the riders, at least. Now in MotoGP it’s the same for the engineers.

MotoGP’s new tech reality, ushered in by control software and Michelin control tyres, has narrowed the set-up window to little more than those arrow-slits you see in castle walls. Engineers must work harder than ever to unlock the secret to going fast, by getting the motorcycle within that narrow range, then asking the rider to find his way around any remaining imperfections.

This is true across all areas of MotoGP engineering, but none more so than in the category’s holy grail of tech: mid-corner turning.

Getting the motorcycle turned in the middle of the corner is currently the biggest factor in faster lap times. This is for two reasons.

First, if the rider can turn the bike quickly mid-corner he minimises the time he must rely on Michelin’s front slick, which doesn’t have the grip or the turning of the old Bridgestone front.

Second, if he can turn quickly he doesn’t have to stay on the side of the tyres to keep turning, so he can point the bike out of the corner and lift it onto the fatter, grippier part of the rear tyre. This allows him to open the throttle wider and faster, without exceeding the mechanical grip of the tyre or the anti-spin capabilities of Dorna’s lower-tech traction control.

He, therefore, gets through the corner faster and more safely, while stressing the tyres less, so it’s a win-win-win.

There are all kinds of ways of making a motorcycle turn faster, most obviously with revised chassis geometry. Johann Zarco, for example, runs unusual settings on his Yamaha M1 to get the bike turned super-quick. But as the factories dig ever deeper into engine and chassis dynamics, there are two areas of development that are particularly interesting.

Engineers have designed flex into chassis for decades. A certain amount of lateral flex in the frame and swingarm helps the bike track the asphalt at high angles of lean, when the front forks and rear shock are almost useless. A little lateral flex in the swingarm also makes the bike less snappy when the rear tyre is spinning or sliding.

Chassis flex can also be used as a tool for better turning in the mid-corner phase. To exaggerate for effect, let’s say that the correct amount of lateral flex makes the chassis bend like a banana between the front and rear contact patches, which helps the bike to turn, because a curving line goes around a corner better than a straight line. The amounts of flex are tiny – one or two millimetres – but that’s enough to help turn the bike better while stressing the front tyre less; another win-win.

Engineering this flex into a chassis isn’t easy because the flex must be spread equally across the entire wheelbase, which involves numerous different components. This explains why Ducati’s MotoGP engineers gave up their trademark arrangement of using the engine as part of the chassis. It may also explain why Honda is experimenting with carbon-fibre swingarms, because carbon-fibre allows engineers to minutely adjust flex in every area, by changing the fibres, the lay-up and the direction of the fibres.

MotoGP’s narrow window for optimum turning and traction has also made crankshaft mass an increasingly important factor in chasing faster lap times. For many years it’s been known that changing crankshaft mass affects various areas of engine and chassis performance.

Once upon a time, factories could adjust crankshaft mass to improve turning or traction by fitting different weights to the flywheels, but today’s sealed engine regulations have spoiled that game, so engineers must get their calculations right or suffer the consequences throughout the season.

Suzuki discovered this to its great cost last year. In 2016 the factory built its engine for better turning. In 2017 the GSX-RR’s crankshaft mass was increased to improve traction, but engineers went too far, so the bike didn’t turn as sweetly as before. That was bad enough, but Suzuki’s technical manager Ken Kawauchi found to his dismay that his calculated improvement in traction was more than cancelled out by the turning issue. Because the riders couldn’t get the bike turned quickly, they were still on the edge of the tyre when they wanted to start accelerating, so the contact patch wasn’t big enough to handle a lot of throttle. This year’s GSX-RR has a crankshaft mass in between the 2016 and 2017 specs, with the hope of getting the compromise just right.


Obviously, all these factors are complicated by the direction of crankshaft rotation and engine configuration, inline-four or V4. Currently all factories apart from KTM use reverse-rotating cranks. The effect of crankshaft inertia depends on crankshaft mass, but also on crankshaft width. Riders of inline-four engines have a wider crankshaft to turn into corners, which requires more effort and energy, which isn’t a good thing. However, MotoGP’s only inline-four brands Suzuki and Yamaha design their crankshafts to concentrate mass at the centre, on the inner flywheels of the second and third cylinders, to minimise the negatives of a wider crankshaft.

Some people believe that because V4s won 14 of last year’s 18 races the V4 configuration has an advantage within the current technical regulations, but most pit-lane engineers don’t go with that. (The dominance of Ducati and Honda is better explained by their lead in number-crunching Dorna’s software.) MotoGP engineers say that each engine configuration has its positives and negatives. Their job is to find the best compromise by maximising the positives and minimising the negatives of each and every part of the motorcycle. Then it’s the rider’s job to make the best of what he’s got…