Rossi’s COTA penalty came from MotoGP’s ever-growing rulebook, so is there a chance that micromanagement could ruin MotoGP? 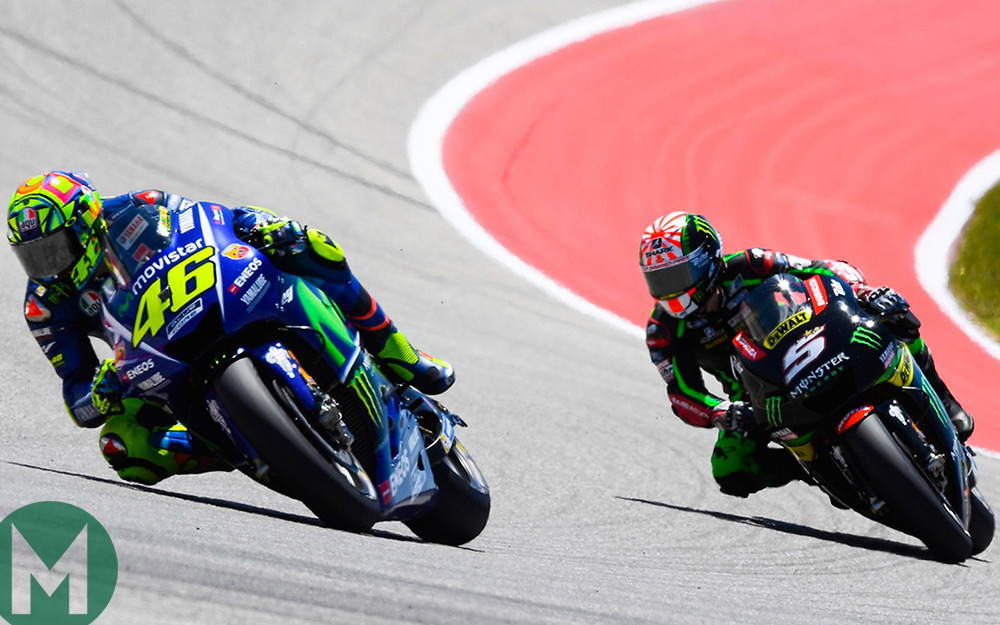 And so to Jerez, the place where MotoGP’s modern era of gladiatorial combat began at 2.45pm on Sunday, April 10, 2005.

Bumping and barging have been going on ever since people started racing motorcycles, but Valentino Rossi’s last-corner attack on Sete Gibernau at Jerez 2005 was probably the start of the tactics we now know so well.

In case you don’t remember, Rossi shadowed Gibernau throughout the race, then dived up the inside at the final the hairpin, colliding with Gibernau. Rossi crossed the finish line while his rival extricated himself from the gravel trap. No penalty was issued.

We have seen Marc Márquez do the same to Jorge Lorenzo and many years ago Lorenzo do the same to a rival at the same place. Some people think this kind of riding is okay, others don’t, but motorcycle racing is a rough sport, always has been. It’s a battle and a ballet (quasi-anagram, see), which is surely its greatest allure.

Wayne Rainey, three-time 500cc world champion, says that racing was like “going out to fight”, 2008 250cc champion Marco Simoncelli said “during the race you want to kill the other riders”. He was talking metaphorically, of course, conveying the intense feelings involved in racing bikes. The emotions are truly savage, so don’t let MotoGP’s snazzy paintjobs and hip hairdos deceive you: motorcycle racing is a vicious business.

There’s not a rider on the MotoGP grid who hasn’t made a nasty pass or three. In Texas it was rookie star Johann Zarco who divebombed Rossi, forcing the Italian onto the asphalt run-off. In the old days Rossi would not have re-joined the track; he would have careered into the gravel trap and probably had an almighty crash. That’s why asphalt run-off is there: it is (usually) safer.

Asphalt run-off may save broken bones during races but it can make things rather complicated afterwards. Rossi used the runoff as intended but he returned to the track at full throttle to reduce his gap to Márquez from 10 bike lengths to two. That’s why the FIM Stewards gave him the 0.3sec penalty.

Some thought the sanction a bad idea, others thought it was reasonable, even Rossi. “For sure I did gain an advantage, so 0.3 is okay,” he said.

But what would’ve happened if Rossi had beaten Márquez over the finish line by two tenths? Yamaha would have protested the decision, so we would now be awaiting answers from various lawyers and the Court of Arbitration for Sport, who know nothing of bike racing. We would be back to November 2015 – sport turned into farce.

For some, this is the worry: that MotoGP is being micromanaged to the point where riders are expected to behave like perfectly programmed robots. And, even worse, the penalty, appeal and counter-appeal procedures will one day have lawyers outnumbering mechanics.

On the other hand, MotoGP is a big sport, with big money and big reputations on the line, so surely every incident must be tackled, especially because the latest camera coverage and timing allow everything to be analysed in detail.

The lucky man in charge of all this is race director Mike Webb, who’s been involved in racing most of his life. He attributes MotoGP’s new world of rules and regulations to modern technology.

“It’s the scrutiny everyone is under, the fact that everyone can see everything all the time,” says the New Zealander. “Also, there’s another factor. Years ago I worked for Ginger Molloy, who finished second to Giacomo Agostini in the 1970 500cc world championship. Most races he finished two minutes behind Ago, but now everyone is fighting over every inch of space on every lap, so tenths and hundredths become important. 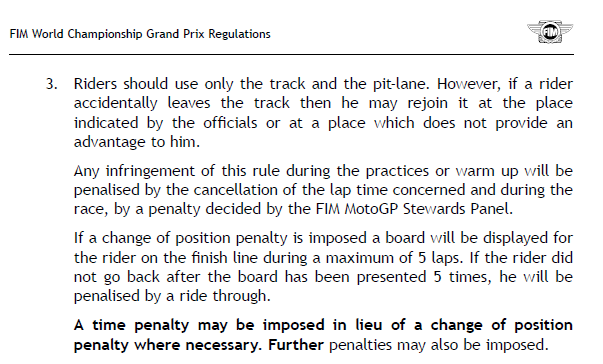 Webb sits on the FIM MotoGP Stewards Panel with FIM permanent steward Bill Cumbow and one other FIM steward, changing race by race. It is interesting that Dorna has removed itself from the penalties process, following the 2015 furore. Presumably Dorna staff want to be out of the firing line, although it’s hard to imagine them not wanting a very loud say in what happens when the stewards deliberate.

“Tiny, tiny things count, so we have to be seen to be fair,” adds Webb. “Yamaha sent us a message during the race, saying they wanted to protest the penalty because Valentino had been forced off-track. But what would Honda’s position have been? They probably would’ve said: hey, Valentino gained several tenths on Marc. Valentino running off track clearly wasn’t his fault, but when he came back he gained quite a bit of time on Marc. The three tenths wasn’t a penalty, it was an adjustment.

“All this has been an evolving thing. In 2014 the rule book stated that a change of position was the only penalty available, no matter what the rider did. That was clearly not fair, so it evolved from there: what other penalties can we propose? Last year the stewards and I concluded that the best thing was to evaluate the time gained and impose a suitable time penalty

“At Silverstone last year Aleix Espargaro got a one-second penalty and Tito Rabat a half-second penalty for running off and gaining time. At Misano, Scott Redding got half a second for a shortcut and Maverick Viñales got a change of position for the same thing. It all depends on the time gained.”

Some riders are aware that they can avoid penalties in such circumstances. Last year Márquez took to the asphalt run-off at Silverstone to avoid a collision with Rossi. As he rode across the runoff he rolled off and re-joined the circuit having gained nothing on the rider ahead.

“Marc knew exactly what to expect, so he put his hand up to say, ‘hey, I know what I’ve done’,” Webb recalls. “Clearly he made sure he gained no advantage. But funnily enough there were some riders at the next Safety Commission meeting who wanted any rider who runs off-track to be penalised. Their argument goes like this: if there had been gravel there he would’ve crashed or lost 30 seconds, so that should be the penalty. Casey Stoner used to say the same thing. These guys do have a point, but I’m not a fan of it; we race in the environment we’ve got and that environment is asphalt run-off. I’m not going to start making artificial penalties that assume there would’ve been gravel there.”

More common are penalties for time gained by exceeding track limits on corner exits – running across the kerbs and back onto the track.

“Dealing with track limits makes our lives a nightmare,” says Webb. “It was a non-issue in the past because if you ran over the kerb you would be on the grass; no advantage gained. Now we have two or three people watching every session and race to pick up riders exceeding track limits. We have many, many views from different cameras that aren’t part of the international TV feed.”

We know where those eyes, and many millions more, will be watching most intently this weekend: at the Jerez hairpin, AKA Jorge Lorenzo corner. Because whenever circuit designers put a hairpin at the end of a lap they create a magnificent last-gasp overtaking opportunity, otherwise known as an accident blackspot. 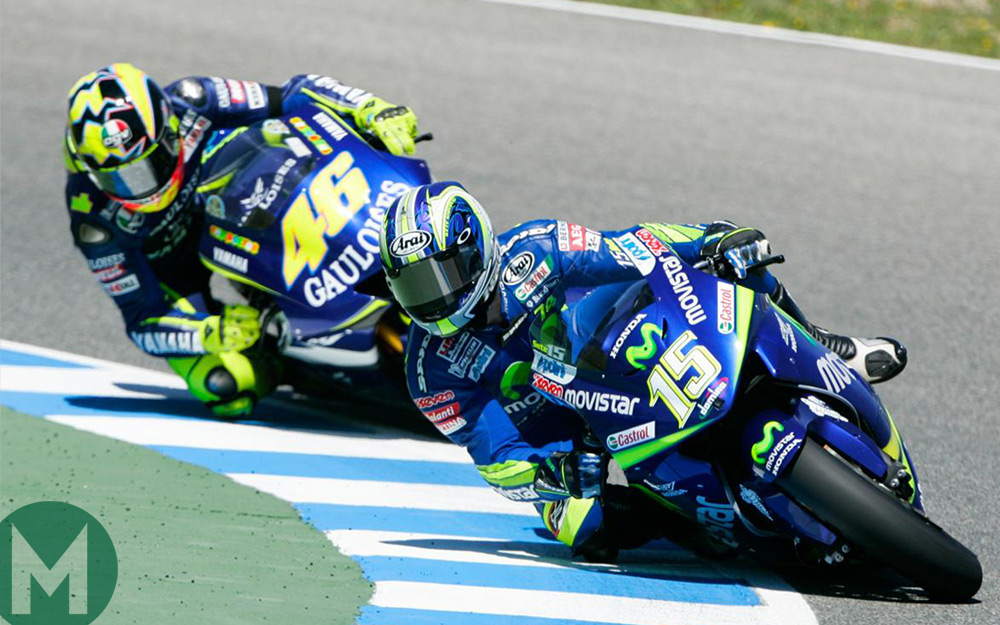 So what would Webb have done if he had been Race Director at Jerez 2005?

“I’ve said that in the current environment I would’ve penalised for that,” he says. “I’m not sure I would’ve changed the position, but I think now we’d be in penalty territory of some sort.”

Webb was Race Director when Marquez snatched second place from Lorenzo in 2013, but followed the precedent of the Rossi decision, so no penalty was applied. However, that doesn’t mean that things will stay that way.

“Things change over the years, what’s okay and what isn’t,” he concludes.

This is what worries me: that outside pressures will begin to squeeze the madness out of motorcycle racing. Dangerous riding is a bad thing, but close racing is a good thing, even if riders tangle knees and elbows every now and again. I want to see a battle as well as a ballet.