What the hell is going on? The MotoGP World Championship seems to have shifted on its axis and nothing seems to be quite the same anymore. 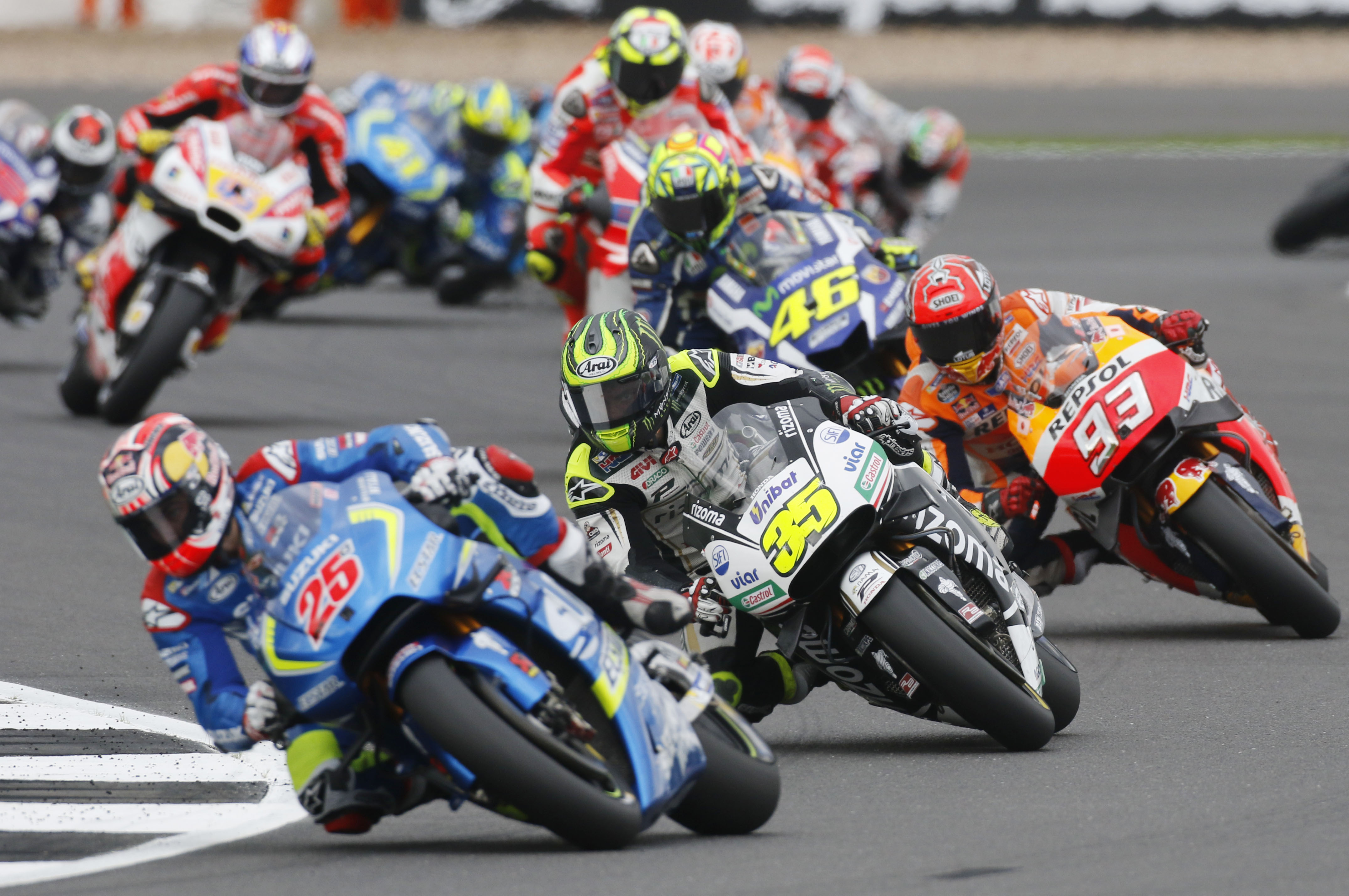 And then there’s been the Brits covering themselves in glory, at last. There have been two British winners and two British pole men in the last two races. The last time two Britons won Grands Prix on the same day was at COTA last year, with Sam Lowes and Danny Kent, the time before that was at Anderstorp in 1977, with Barry Sheene and Mick Grant. Cal Crutchlow, John McPhee, Lowes and Kent weren’t even born.

MotoGP’s record books aren’t just being rewritten this year, they’re being thrown on the bonfire. So, what exactly is behind this convulsion? It cannot be mere coincidence, can it? 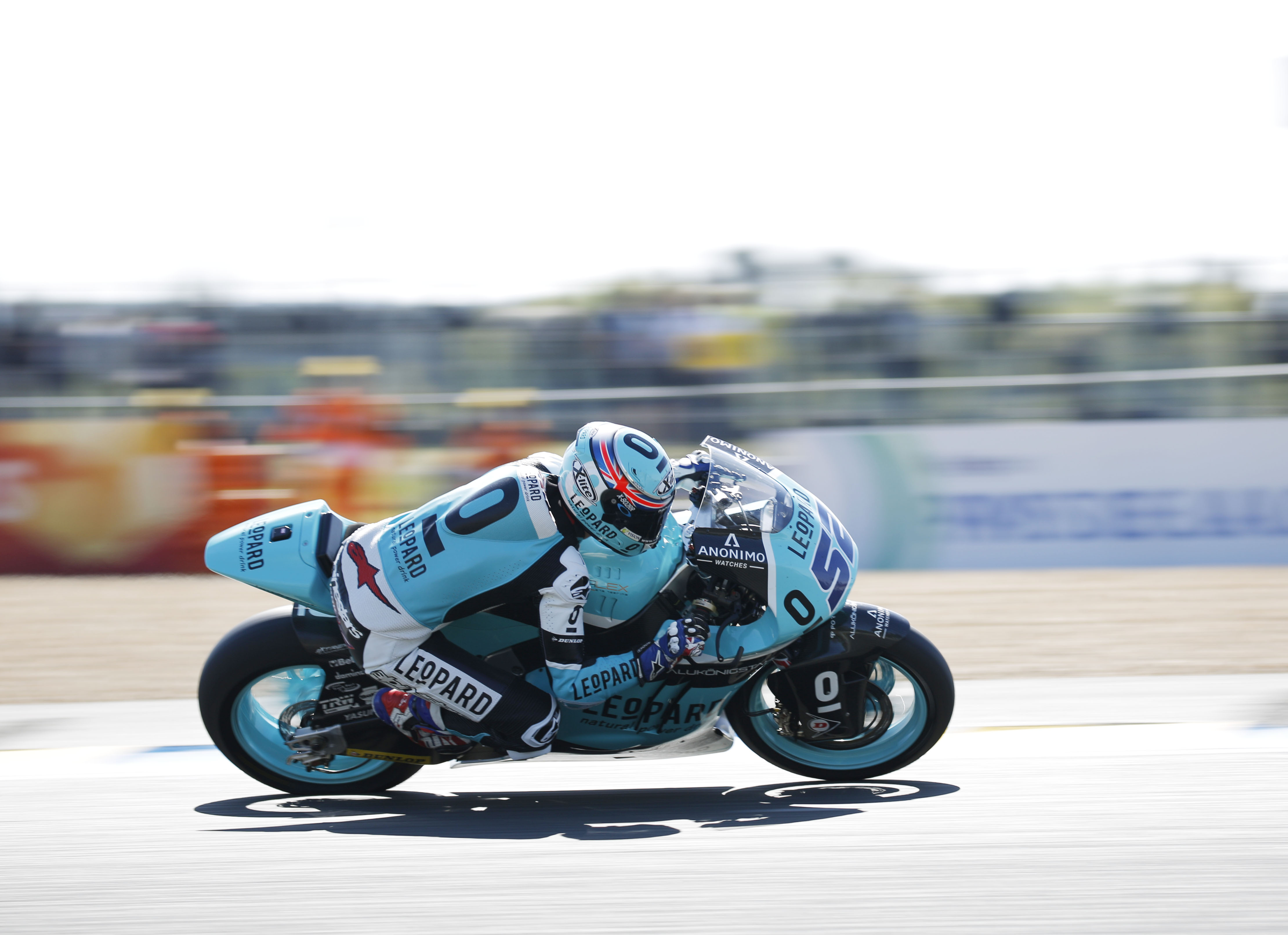 There are several main reasons for this wholesale trashing of the MotoGP status quo.

MotoGP riders and teams are still adjusting to the new-for-2016 Michelin tyres. They don’t know French rubber as well as they knew the Bridgestones, so there’s often an element of guesswork on Sundays, especially since Michelin’s compound allocations provide a greater range of potential race tyres than Bridgestone’s allocations.

Riders and teams are also getting used to the same-for-all Magneti software, which has substantially reduced the performance the gap behind the dominant Honda and Yamaha factories, which previously enjoyed a major advantage with their cutting-edge traction control, anti-wheelie, engine-braking control and launch control. Suddenly, Suzuki and Ducati can beat Honda and Yamaha.

Also, the unified software is much less sophisticated than the previous tailor-made factory kit, so riders have to work much harder to control the bikes, using their talent and throttle control, rather than the factory-made rider aids doing much of the work for them.

This year’s changeable weather has also played a major part in recent weeks, especially in and Crutchlow’s Brno victory and Jack Miller’s Assen win. Wet races and wet/dry races are always more of a gamble, where fortune favours the brave and the brainy.

The same was true at Silverstone, where race day was dry but both days of practice had been rainy, so none of the teams had been able to complete race-distance runs in FP3 and FP4 to help them make calculated decisions on tyre choice. So the usually dominant teams weren’t able to maximise their performance for Sunday. 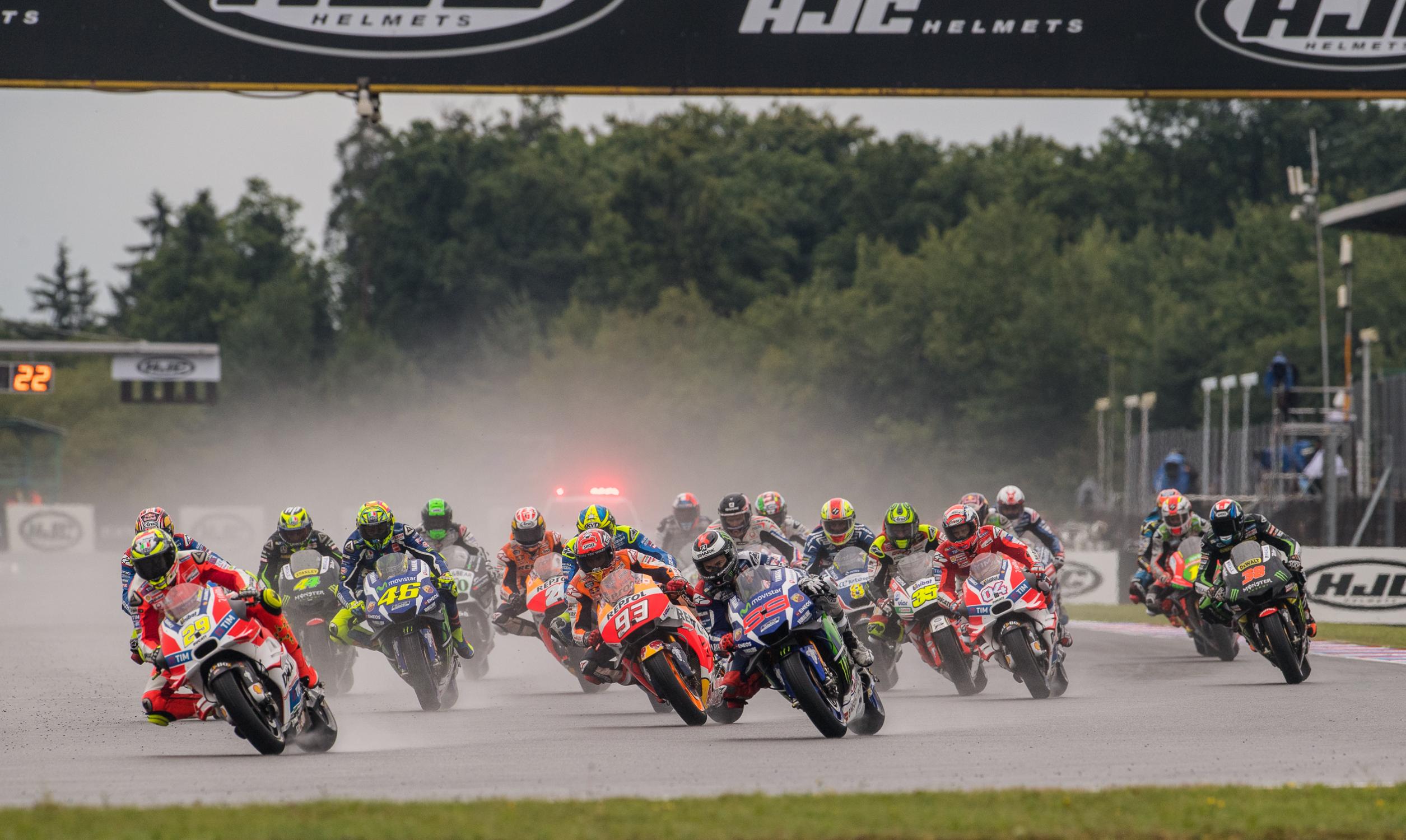 This is taking nothing away from Suzuki. The factory’s GSX-RR inline-four was a better bike than the factory’s old GSV-R V4 from the moment it rolled out for the 2015 season. Suzuki had struggled with its GSV-R for 10 years, gaining just a single victory at a rain-lashed Le Mans in 2007. From the very beginning of last season Suzuki riders gave the GSX-RR the ultimate accolade: it handles and steers like a 250.

The reasons for such a variety of winners in Moto2 and Moto3 is simple: the machinery in the intermediate and junior categories is closer than it’s ever been; thanks to Dorna’s efforts to reduce the gap between the rich teams and the small teams.

What about Britain’s new breed of Grand Prix heroes? Why are Brits winning GPs after decades of mostly miserable results?

Britain dominated Grand Prix racing through its first three decades from 1949. British riders won 138 of the 300 premier-class races staged between the inaugural world round and Barry Sheene’s final win 1981. Since then there have been 534 premier-class GPs with just one British winner.

How so? In the first years of GP racing, the British motorcycle industry mostly ruled the world and British companies usually signed British riders. Barry Sheene came in at the end of all this. By then the British industry was dying as the Japanese came fully on song, building engines that made ridiculous amounts of horsepower. The machines – their chassis utterly overpowered by their engines – needed special riders to ride them; riders who were used to riding out of control. Enter the Americans and Australians, brought up sideways on dirt tracks. This was racing’s only era when regional riding talent, rather than regional industry and finance made the difference. 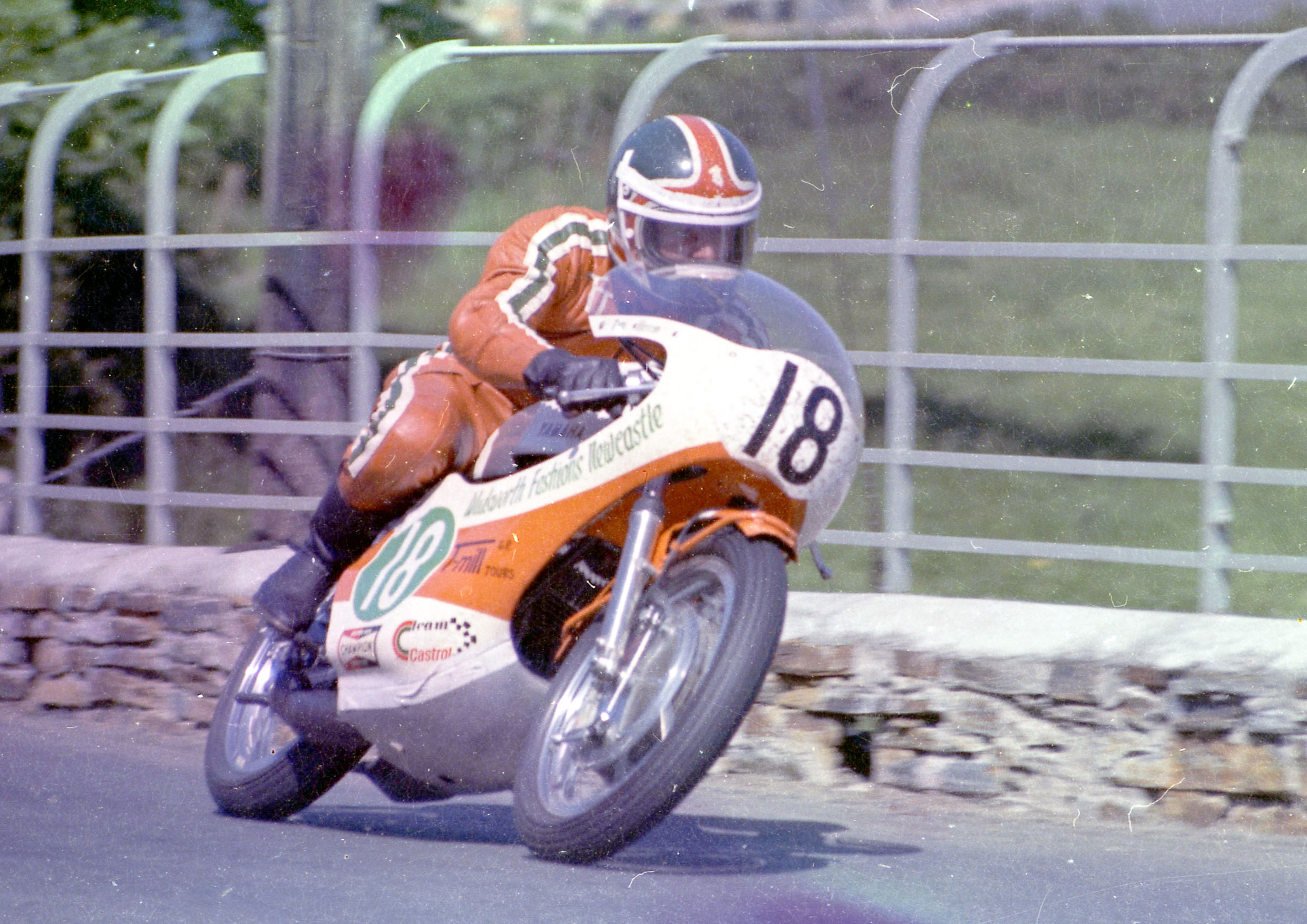 Soon after King Kenny Roberts began the dirt trackers’ reign as Grand Prix overlords, Britain entered the disastrous recession of the early 1980s. Suddenly, British riders were on the dole and British sponsors were going bankrupt. They couldn’t afford to run expensive 250cc and 500cc GP-spec two-strokes, so in 1985 race promoter Bruce Cox invented the Superstock series for stock (ish) street bikes. Superstock immediately became the number-one British championship, supported by bog-stock production racing championships for 600cc, 750cc and 1300cc machines. At the same time, British teams were still spending far too much money and effort on the Isle of Man TT.

Britain had found a cheap and comfy byway, away from the exotic, high-speed highway of GP racing, where Americans and Australians ruled the fast lane. Racer-turned-commentator Keith Huewen was an arch-exponent of this new era of British racing: he went from running a gorgeous, state-of-the-art 500 GP bike, which very nearly bankrupted him, to winning the Superstock title on an FZ750 donated by a friendly Yamaha dealer.

Three years after the birth of Superstock, American former racer Steve McLaughlin created the World Superbike series. And thus this new breed of British rider bred on streetbikes now had a world-class arena; a bit like the First Division, running alongside the Grand Prix Premier League.

Most other countries rightly thought Britain was crazy: why were British riders wobbling around on streetbikes when the Continentals were charging about on cutting-edge Grand Prix two-strokes? 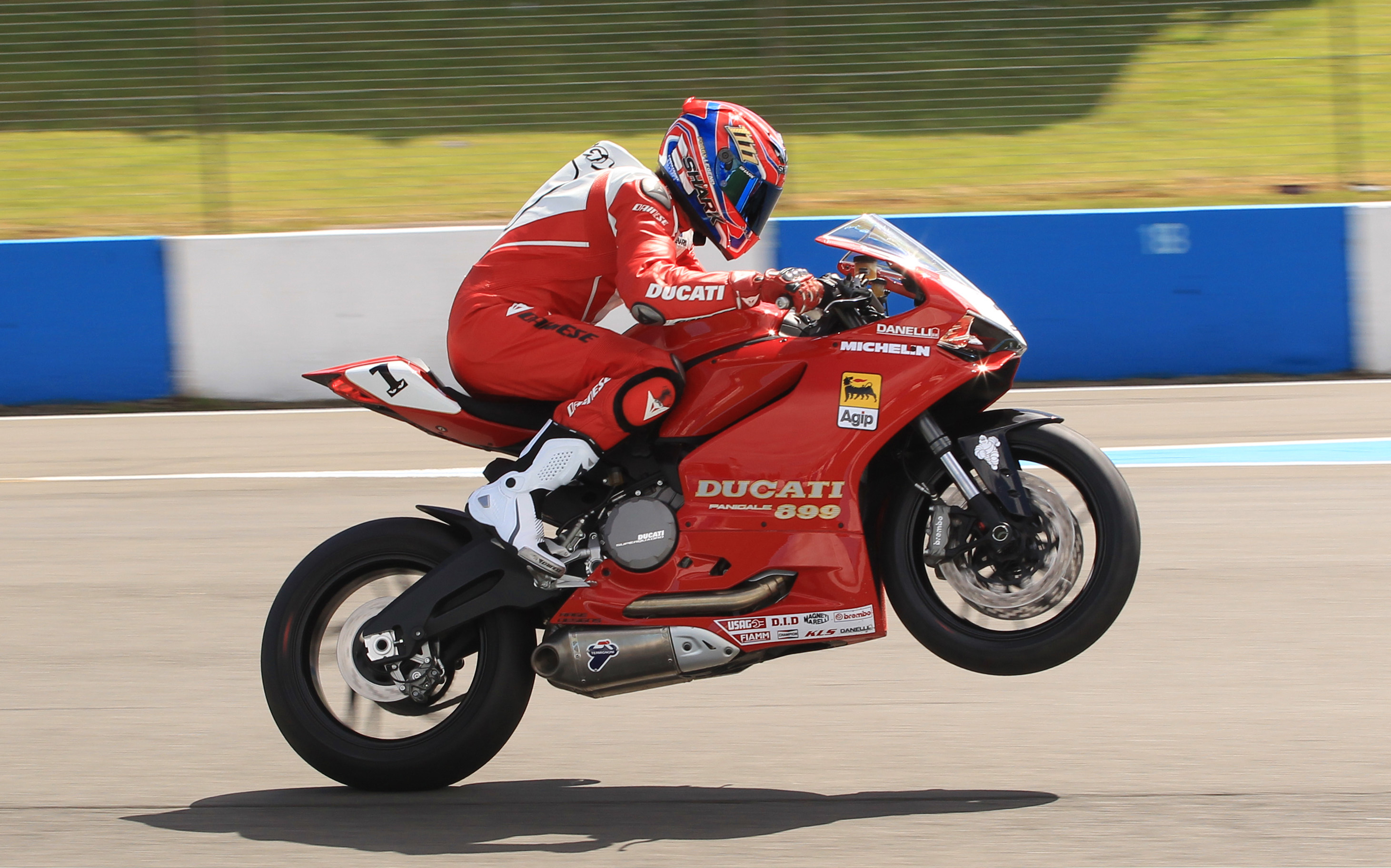 But most Brits weren’t worried because Carl Fogarty and others were waving the flag in World Superbike. So the country had its heroes, never mind that they were winning First Division crowns, not Premier League championships.

Occasionally a British World Superbike star would climb off a nice, ride-friendly superbike and onto a mean, nasty GP 500cc two-stroke. Inevitably, he would soon limp away, returning to his WSB comfort zone.

The people who did start worrying were Dorna. The MotoGP rights-holders were making plenty of money selling TV rights to Spain and Italy but that was the limit of their income; what they needed were stars from Britain, Germany and everywhere else, so they could sell TV rights to countries across the globe. So they started talent-hunting young Brits – they even sent spotter Alberto Puig to Snetterton. Dorna backed young Britons that Puig rated, like Chaz Davies, then Bradley Smith, Scott Redding and others, finding them homes in low-budget Italian or Spanish GP teams, where they mostly struggled.

But the process had been started. Others were chosen by Dorna to learn their trade in Spanish races: Davies, Redding and Smith were followed by Kent, McPhee and the rest. These riders soon graduated to the MotoGP paddock and, bit by bit, the results came.

At about the same time, it turned out that Britain had in fact been correct to spurn two-stroke GP bikes in favour of four-strokes. In 2002 MotoGP went four-stroke, in 2010 Moto2 replaced 250s and in 2012 Moto3 took over from 125s.

The world had come full circle. In the old days, if Lowes had come from World Supersport to 250s he might never have made it to the top – the change from a 600 streetbike to a 250 blade can be just too big and too complex. But jumping off a Supersport 600 onto a Moto2 bike is entirely doable. 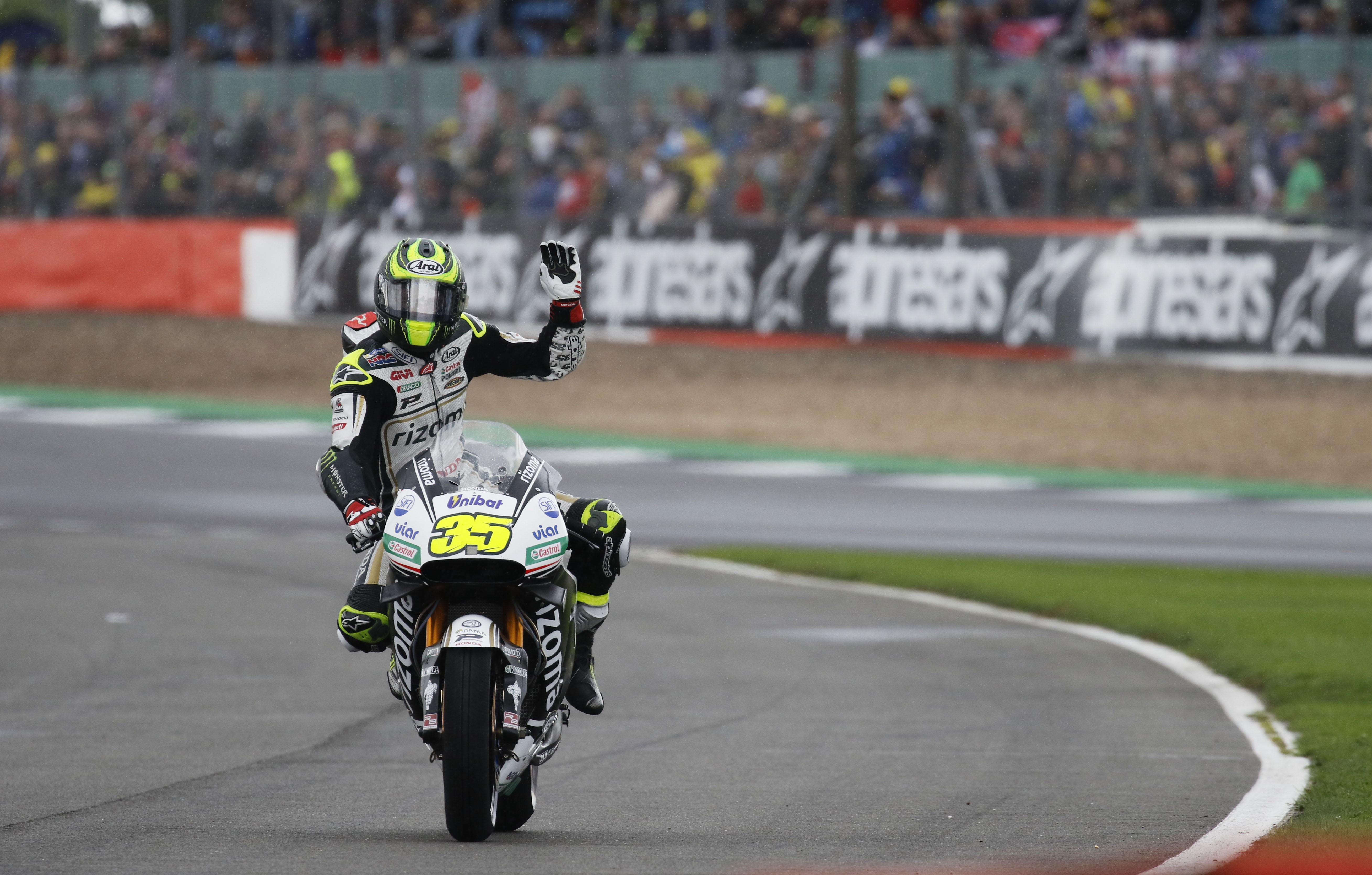 Twice WSB champ James Toseland stayed in World Superbikes too long before switching to MotoGP, so he never quite got the hang of a MotoGP bike. Crutchlow, on the other hand, was incredibly brave to turn his back on a well-paid factory WSB ride after just one season. He could’ve stayed in WSB on a good earner for years, but he decided to risk it all and go for Premier League success.

It worked and Britain’s GP points began to stack up. In 2012, when Crutchlow was in MotoGP, Redding and Smith were in Moto2 and Kent in 125s, British riders amassed 644 points. Last year the total was 928, 34 times more than a decade and a half earlier.

British fans still moan about some Britons not getting the best rides with foreign teams. They complain, quite rightly, that Eugene Laverty deserves a better Ducati from Jorge Martinez’s Valencia-based squad, instead of a hand-me-down model. But did Norton ever offer Angel Nieto a factory ride in the 1960s or did they offer Tarquinio Provini a factory contract in the 1950s? Of course they didn’t. Factories and sponsors prefer riders from their own countries. That’s just the way it is.

British riders have never lost their talent; they were simply brought up badly by a racing system that side-lined them into the Isle of Man TT and then into Word Supersport and World Superbike. Now hopefully that tide has changed, thanks to Crutchlow, McPhee, Lowes, Redding, Smith and the rest, and Dorna, of course.