The Qatar GP very nearly didn’t happen on Sunday. Might it be time to admit that Losail’s floodlit folly is no more than a dazzling definition of more money than sense? 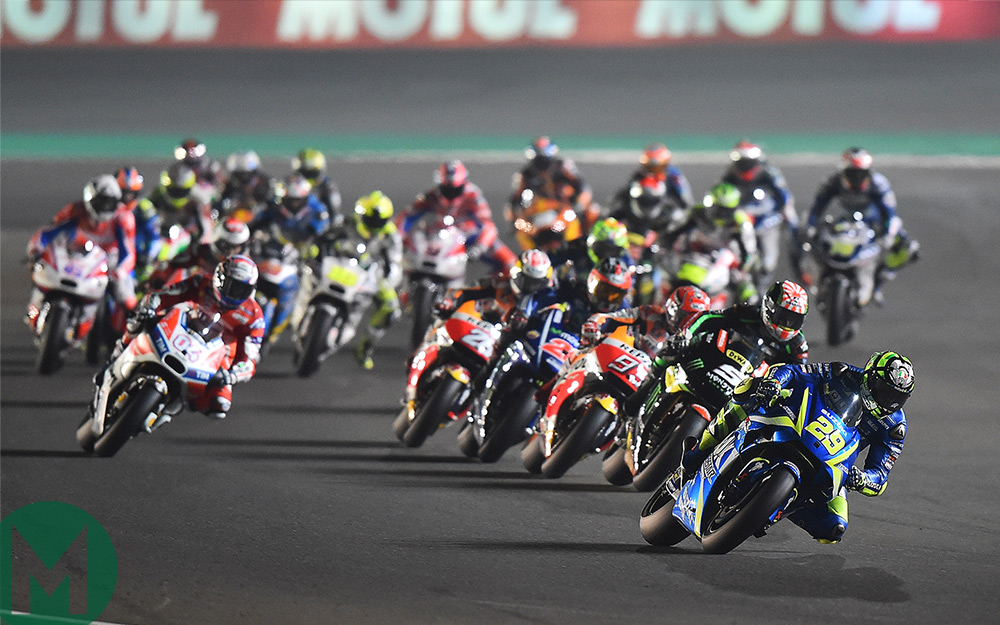 Man makes his plans and the gods laugh. All the way through the four days and nights of the Qatar Grand Prix you could look to the heavens and see the weather gods sitting atop their clouds, laughing loudly as several thousand frail little human beings rushed hither and thither around a paddock thrown into disarray by one biblical downpour after another.

The weekend schedule melted to nothing in the rain and remained fluid throughout. No one knew what was happening, except the rain gods, who spent the weekend puncturing the hubris of the billionaires and their floodlit vanity project. It had cost these megalomaniacs – who live above the world’s largest gas supplies – 44 diesel generators at 30,000 euros each, 500 kilometres of electrical cable and 3000 tonnes of concrete to turn night into electrical day. Surely they had defeated nature?

No they hadn’t. When the humans wanted a dry track, the gods hurled forth another rainstorm. And when the humans wanted a wet track, so riders might assess the dazzling effect of a 5.4-million-watt lighting rig on a rain-soaked visor at 210mph, the rain gods blew a mighty wind that dried the asphalt, so the session didn’t go ahead. That’s a new one: practice cancelled due to a dry track.

The chaos was reminiscent of the 1992 Brazilian GP, when we travelled to Sao Paulo’s Interlagos Formula 1 track, for the first and last time. The riders – Kevin Schwantz, Mick Doohan, Wayne Rainey, Eddie Lawson and the rest – weren’t convinced the track was safe. They had watched Brazilian Formula 1 races on TV and didn’t like the look of the huge wall that borders the final corner – a high-speed, full-throttle blast where a highside would fly its victim halfway to Rio de Janeiro.

The riders therefore sent their safety rep, GP winner Didier de Radigues, to check the circuit and report back. De Radigues flew to Brazil, had a look around and returned to Europe. The track is just fine, he said.

When Schwantz and the others arrived at Interlagos they looked at the wall and wondered where de Radigues had been looking. They didn’t want to race, so they convened a meeting. After much angry debate, the reliably cantankerous Lawson lost patience and stormed out. “Whatever you guys do, I’m going to do the opposite,” he swore.

Friday morning dawned dark and wet. Pitlane remained utterly silent, until a single 500 crackled into life. Lawson rode out of the Cagiva garage, stopped outside Rainey’s pit, blipped the throttle angrily, then took off down pit lane. The event went ahead. 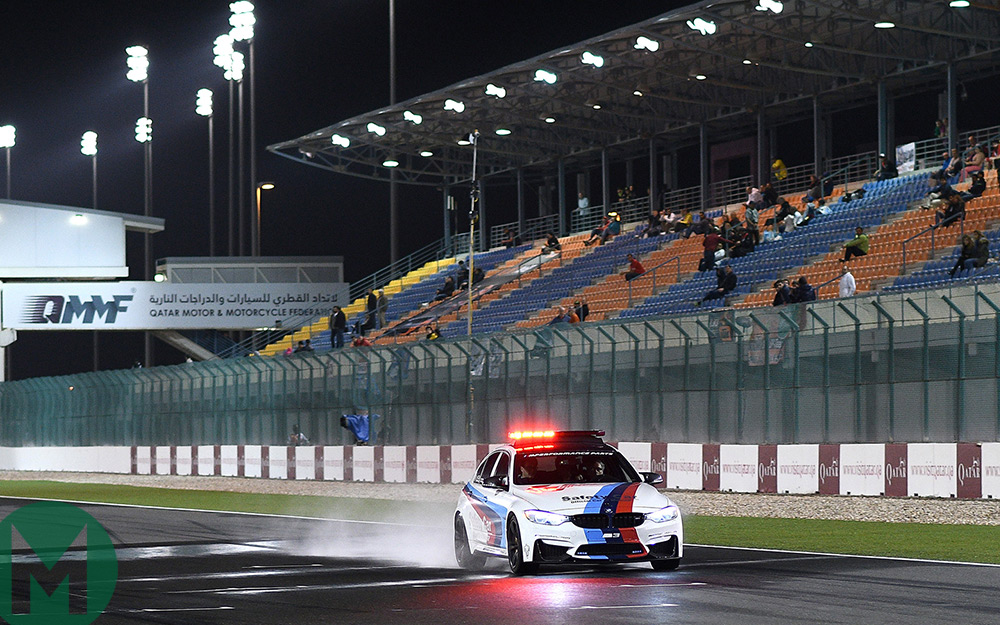 Saturday’s entire qualifying programme was cancelled due to another cloudburst that transformed the track’s runoff areas into lakes. On Sunday morning satellite images showed more rain on the way: race night became a game of Arabian roulette.

As Moto3 and Moto2 went racing the storm clouds gathered. Then, just as the first MotoGP bikes barked into life, the rain gods amused themselves some more by sending down a sprinkling of rain, just enough to delay the start, twice. Perhaps the race would have to wait until Monday, as it had in 2009, when a torrent of rain flooded the grid.

Now Race Direction faced another problem. As the night air cools, dew forms on the track, catastrophically reducing grip. The so-called dew point is usually marked by a ruinously expensive cacophony of carbon-fibre on asphalt.

Dorna, Race Direction and IRTA may have been forgiven for suffering a collective nervous breakdown at this point, but they kept their heads to keep the Qatari vanity project on track. What the billionaire wants, the billionaire gets.

As each minute passed the situation became more desperate, so Race Direction announced the result would stand even if the race lasted only three laps before the red flags came out. This would’ve made the 2017 Qatar GP the shortest race in 69 years of world championship racing, 45 miles short of the required minimum.

Even the lowliest club race lasts more than three laps. And perhaps that’s what MotoGP’s several hundred million TV viewers thought they were watching as the shambles unfolded.

But money talks. The Losail promoters pay Dorna handsomely for the honour of hosting a unique event: the season-opening Grand Prix under floodlights. The fee for this one event probably keeps half the Moto2 and Moto3 grid going for the season. That’s why the race must go ahead under floodlights, even though the daytime temperature in March is a pleasant 25deg C.

The night race idea was originally conceived after the first two Qatar GPs, run in October 2004 and 2005, when the temperature reached a brain-frying 48deg C. No problem, said the promoters, we will build the world’s biggest floodlight system that burns enough energy to illuminate a road from Doha to Moscow. But what about the dew? No problem, they said, we can install under-track heating. Seriously. 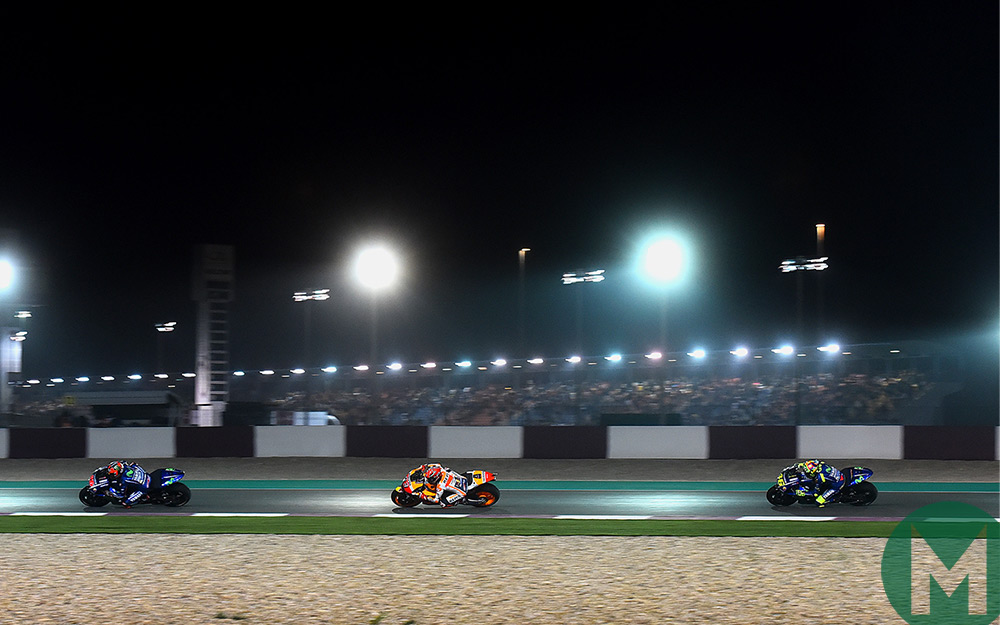 It is in humanity’s nature to forget the bad and remember the good, so when the MotoGP grid finally charged towards the first corner 45 minutes late, all the hoo-ha was forgotten.

Well, perhaps not by the riders. Losail offers sketchy grip at best, so much of the grid took the first few laps (relatively) cautiously, but not rookie Johann Zarco.

Zarco was great to watch, throwing caution to the wind in his first MotoGP race. Fast throughout practice, he risked everything in those first few laps. Anyone who can pull a second on Marquez is obvious playing fast and loose with the limit. Finally he ran off the grippy line into turn two, Losail’s accident black spot, and down he went.

Scott Redding had fallen at the same place in practice. “I was greedy somewhere I shouldn’t have been,” said Redding after his tumble. Zarco’s greed cost him dear, the chance to become only the third rider to win on his premier-class debut, after Max Biaggi in 1998 and Jarno Saarinen in 1973.

Yamaha’s new man Maverick Viñales had the most to lose and might have been forgiven for taking fright. His preseason pace had marked him out as championship favourite and in that position he could do nothing worse but crash out of the first race. Instead he rode a race of perfection: playing it cool in the early laps, allowing the others to take risks, then once he felt confident he moved relentlessly forward. The 22-year-old’s second MotoGP victory gave Yamaha a Losail hat-trick and confirmed him as the man most likely to win the 2017 crown.

Ducati’s Andrea Dovizioso was so close yet so far once again: this was the third time in a row he had ridden to a close second-place finish behind a Yamaha at Losail, behind Rossi in 2015, behind Jorge Lorenzo in 2016 and now behind Viñales.

Valentino Rossi’s Lazarus-like comeback from a grim preseason and a troubled first two days of practice was typical of the man. He had seemed in all kinds of trouble on Thursday and Friday, way down on the fourth row of the grid, but when the lights out he became a different man. Part of his genius is that he knows how to make a race work for him.

Few riders cut a more desultory figure after the race than Dovizioso’s new team-mate Jorge Lorenzo. The Spaniard went into the weekend with a real hope of becoming only the second rider after Rossi to win back-to-back premier-class races with different manufacturers. He had won three of the previous five Qatar GPs and the Desmosedici has enough rear traction to overcome Losail’s iffy grip. But the rain gods weren’t on his side. The loss of qualifying left him at the back of the fourth row, which was why he ran off track as he hurried to make up positions. His gloomy face told the story: it may be a while before he gets to another track where the Ducati works so well. 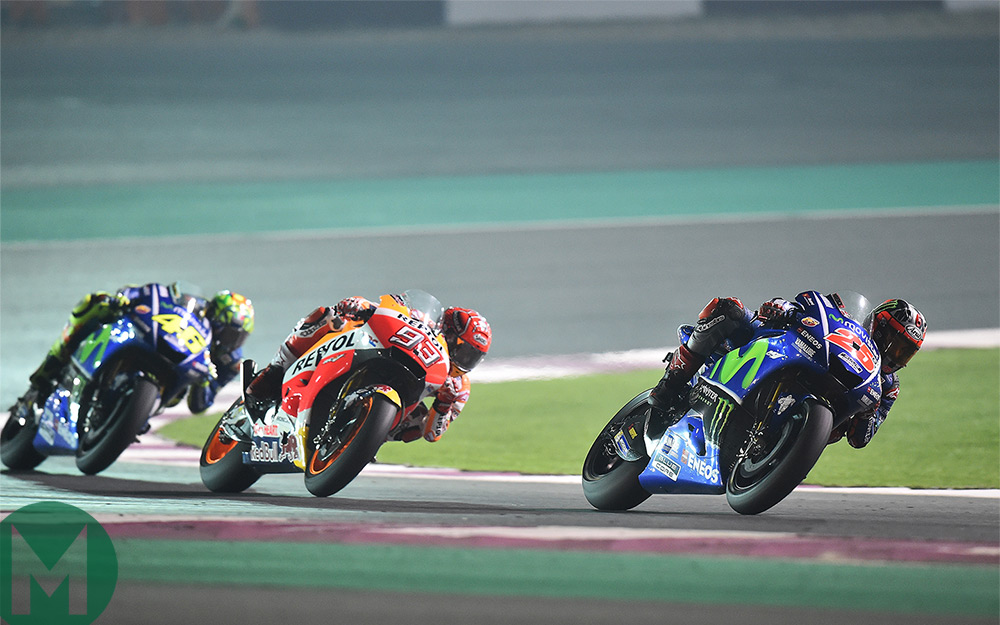 Honda never has an easy time at Losail. The RC213V was conceived to take advantage of the stunning braking performance of Bridgestone’s front slick. But Losail isn’t a braking track; the only real braking zone is into the first corner. And anyway, Michelin’s front doesn’t have the Bridgestone’s braking grip. Nevertheless, the RCV still needs a hard-compound front tyre to maximise corner entry, but the cooling conditions had Marquez, Dani Pedrosa and Cal Crutchlow switch to medium fronts. Marquez’s aggressive style destroyed his front tyre in a few laps. Crutchlow’s front got too hot, causing him to crash. Pedrosa, a lighter, smoother rider, suffered less and by the finish he was right behind Marquez.

Another few laps and both Repsol Hondas may have fallen victim to the man of the race: Aleix Espargaro on the Aprilia. Riders who know they’re not in the title hunt do have an advantage in sketchy conditions. They can risk it all, knowing that they will reap the reward if their gamble works. And if they overdo it and crash, no big deal.

Either way, Espargaro was inspired, just as he had been on several occasions when he rode Aprilia’s CRT bike. The Spaniard – for too long in the shadow of younger brother Pol – is one of those riders who takes joy in a risky ride. That was plain to see on Sunday night.

As Viñales climbed the podium the gods had their last laugh: the heavens opened once again. It was almost beyond belief: after the merry dance of the weekend, the gods had allowed MotoGP the slimmest of windows to get the job done.

Perhaps this was the rain gods’ way of thanking us for having so much fun at our expense. Or was it the gods at all? Over the past year or so the United Arab Emirates has created record rainfall via cloud seeding; the process of planes firing salt crystals into clouds to increase condensation and trigger rain. This time next year the Qataris need to talk to the UAE and all will be well.