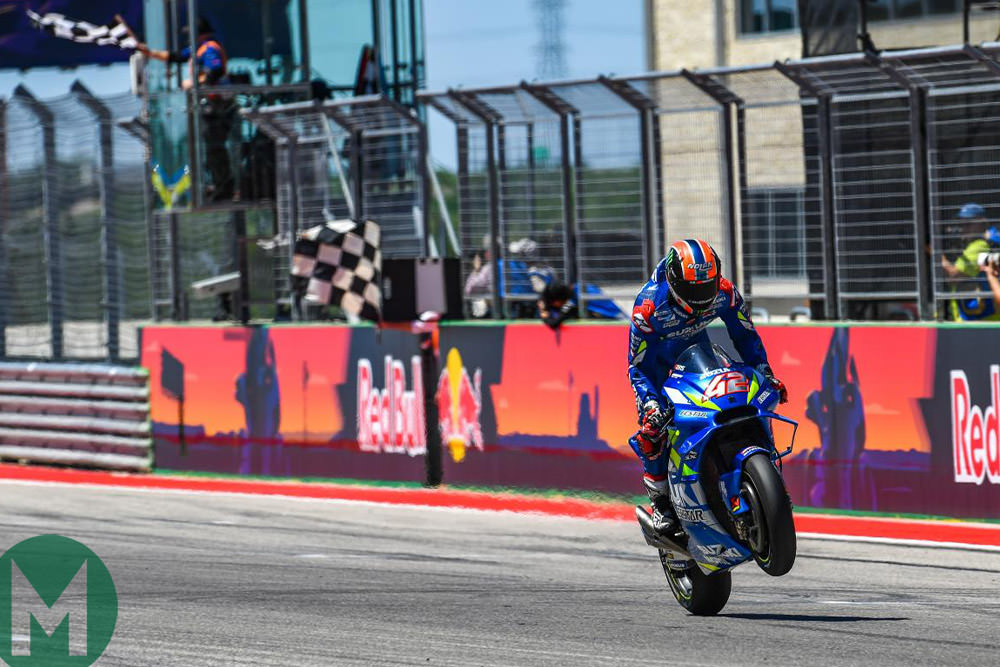 Suzuki has finally created a motorcycle that can win the MotoGP world championship for the first time since Kevin Schwantz and his RGV500 won the 500cc title in 1993, more than a quarter of a century ago.

But hang on a moment, you say: Kenny Roberts Jr won the 500 crown in 2000 with an RGV500. Yes, but the bike he raced that year wasn’t exactly a Suzuki. When KRJR joined the Hamamatsu factory the previous year his father ‘King’ Kenny Roberts insisted that genius Team Roberts engineer Warren Willing went with him.

“Kevin had ended up with so many injuries because he overrode the Suzuki for so long, so Kenny [Roberts] Sr was much happier if I went to Suzuki with Jr because he was concerned he would end up getting injured on the Suzuki,” said Willing, who succumbed to cancer four years ago.

The RGV500 that Kenny Roberts Jr rode to the 2000 title was essentially a Team Roberts motorcycle. The chassis was designed on the jig at the Team Roberts workshop in Banbury, Britain, while the engine cylinders and expansion chambers – the beating heart of a two-stroke – were made good by their long-time tuner Bud Aksland, on his dyno in California.

“We won the title in 2000 despite Suzuki, not because of them,” said Willing.

Suzuki’s first efforts in the new four-stroke MotoGP world championship were similarly flawed. Most famously KRJR and team-mate John Hopkins collided and crashed at Mugello in 2003 due to the GSV-R’s ride-by-wire throttle, which didn’t always slow the motorcycle when the rider closed the throttle. Worrying, to say the least.

Suzuki has come a long way since then. And this time by itself. The GSV-R V4 project was shut down at the end of 2011 and the factory returned to MotoGP in 2015 with a 100 per cent different motorcycle: the inline-four GSX-RR1000.

Right away the GSX-RR was something special. Suzuki’s new signing Aleix Espargaró gave the bike the ultimate compliment when he said it steered like a 250. Since then Suzuki – the smallest Japanese effort in MotoGP – has steadily and cleverly chipped away; maximising the bike’s strong points and minimising its weak points.

For the past year at least the GSX-RR has been the best balanced, neutral bike on the grid, thanks largely to Suzuki technical manager Ken Kawauchi, the chief architect of the project. All the bike needed to fight the Ducati and Honda was a bit more peak power, better braking stability and a more experienced rider. Now it has all those things – hence Álex Rins’ superb victory at the Circuit of The Americas on Sunday. Yes, Marc Márquez crashed out of the lead, but to finish first, first you must finish.

It wasn’t mere coincidence that COTA was the scene of Suzuki’s first MotoGP victory since Maverick Viñales won at Silverstone in 2016. COTA and Silverstone are both bumpy, twisty and with a great variety of corners; the kind of racetrack where a balanced, neutral motorcycle can make better time than a faster machine that needs more manhandling. 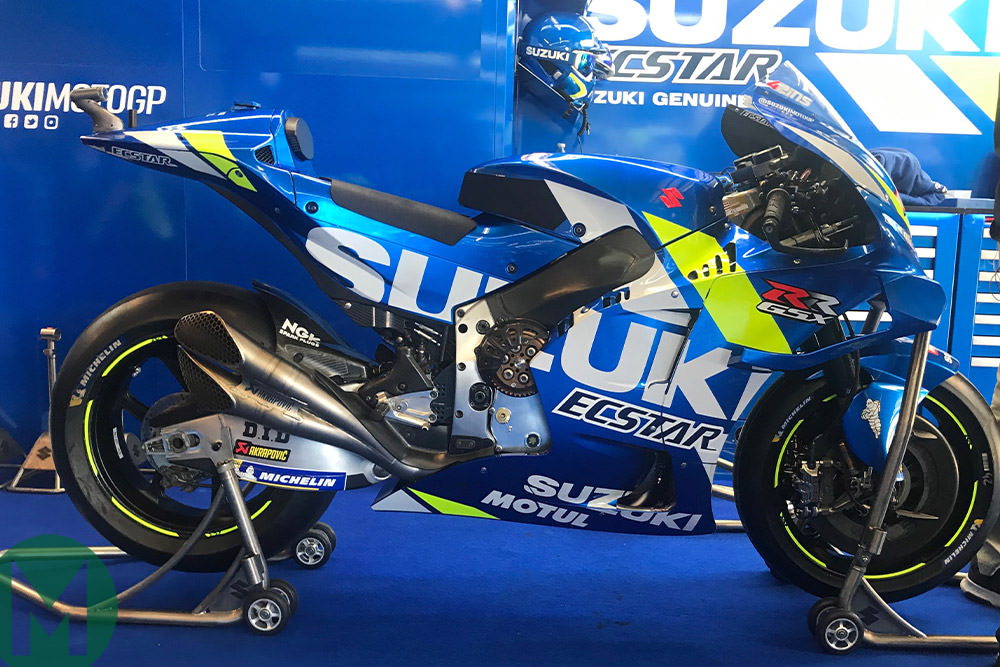 Suzuki did well to junk its GSV-R V4. There’s not much point in fighting Ducati and Honda with the same kind of weapon – much better to go your own way and build your own battle sword, which can find chinks in the armour of the V4s.

An inline-four MotoGP bike allows its designers to create a better-balanced motorcycle because the engine is more compact, so the engineers don’t have to compromise the chassis design so much. This is one reason why the GSX-RR and Yamaha’s YZR-M1 are MotoGP’s most rider-friendly bikes that can ride through corners faster than Honda’s RC213V and Ducati’s Desmosedici.

Was it coincidence that two inline-four machines topped the podium at COTA? Probably not. The last time two inline-fours finished first and second was last October at Phillip Island, another track where devastating corner speed more than compensates for not-so-dazzling top speed.

It is easier to get more horsepower from a V4, but peak power isn’t everything around a racetrack, especially if a rider can use his superior corner speed to exit corners faster and find more miles per hour that way. The Suzuki has always lacked a bit of top speed, but as Valentino Rossi’s former crew chief Jeremy Burgess used to say, you only use top speed once a lap.

Nonetheless, Suzuki has worked hard to eke more power and rpm out of the GSX-RR. Its engineers have also worked to improve corner-exit traction, so the rider can get on the throttle sooner and harder, which once again, compensates for any missing horsepower.

This arms Rins with a useful weapon: he can use corner speed when he has a clear track ahead, or he can stop the bike and use the drive grip when he’s got rivals in his way.

Rins’ corner-exit advantage over Rossi at COTA on Sunday was easy to see. And it was this that helped him hunt down the veteran.

Last season Suzuki also made significant steps with braking stability, so just as its riders could reduce their horsepower deficit by opening the throttle earlier, they could also win back some metres at the end of straights by hitting the brakes later.

Just as important, the GSX-RR is the best bike in that crucial corner-entry phase when the rider releases the brake, because it finds the front grip to turn, rather than go straight.

The Suzuki became fully competitive after last year’s midseason break. At the Red Bull Ring, the factory introduced a new aluminium/carbon-fibre composite frame that refined turning and reduced wheelspin. Then, during the winter, Rins got a new engine, which gave him enough speed to just about hold his own with the fastest bikes.

Last year, crankshaft inertia was just right; all that was required was a bit more top-end. 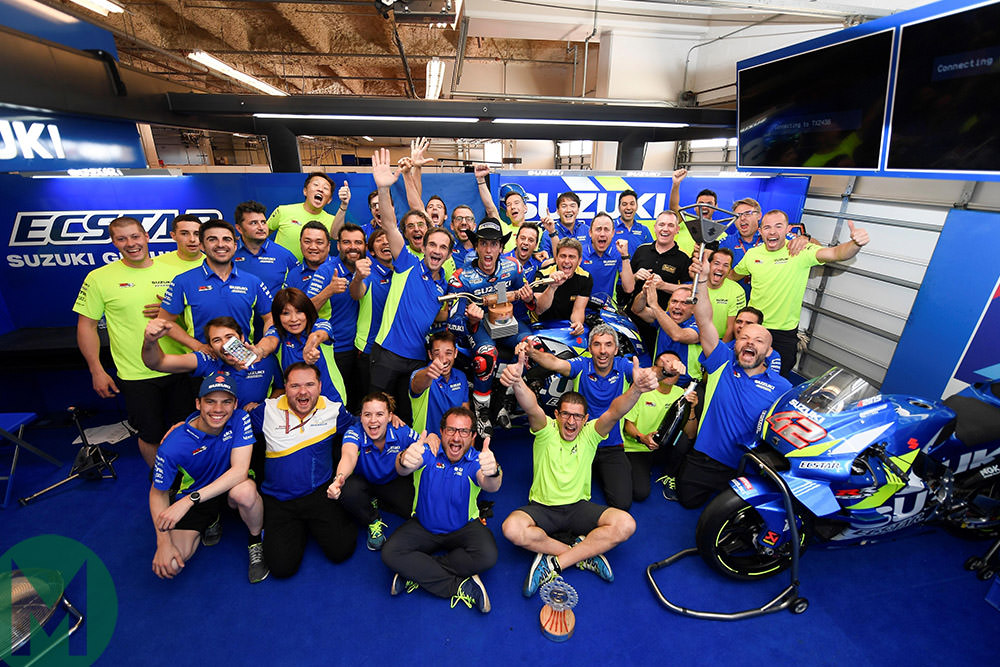 The Spaniard came to MotoGP in 2017 and apart from a few crashes and injuries he has quietly got faster and faster and faster. Rins is so smooth and unruffled on a motorcycle that you barely notice he’s there. He is like a stealth rider – he doesn’t pull maniac moves on the track and he doesn’t make headlines off the track.

He’s very clever. He is very easy on the bike and gentle with the throttle, so he doesn’t overstress the tyres, even when he’s riding at race-winning pace. His smoothness helps in other ways too. He likes his bike to feel nicely balanced, so he uses less aggressive chassis geometry, so the bike doesn’t pitch too much in and out of corners, which again reduces tyre stress.

Rins is also very calm, so over the past two-and-a-bit seasons he has learned step by step, never trying to run before he can walk. And the closer he’s got to the front, the more he’s been able to learn from the fastest riders. He learned a huge amount last month in Qatar, where he battled with Andrea Dovizioso, Márquez, Cal Crutchlow and others. All that knowledge played a part in his success on Sunday.

There is one other factor in Suzuki’s success. The factory established its first official European test team last year. Former full-time MotoGP rider and 2014 World Superbike champion Sylvain Guintoli does the riding, while Tom O’Kane is his crew chief. O’Kane has worked in grands prix since the late 1980s, when he created the first serious datalogging kit for Marlboro Team Roberts Yamaha.

No doubt O’Kane has played an important role in getting the most out of MotoGP’s control software. The Irishman and Guintoli also helped Suzuki close the gap last summer with that aluminium/carbon-fibre frame and during the winter with a new engine spec that gives the perfect blend of torque and horsepower.

Rins’ COTA victory won’t be his last – all of a sudden MotoGP has four winning motorcycles. And all those people who suggest that you need a V4 to win in MotoGP should understand that racing is all about compromise: there’s no such thing as a motorcycle that can do everything better than any other motorcycle.