Why Rossi could win the championship and why Ducati, Honda and Yamaha had very different weekends at COTA 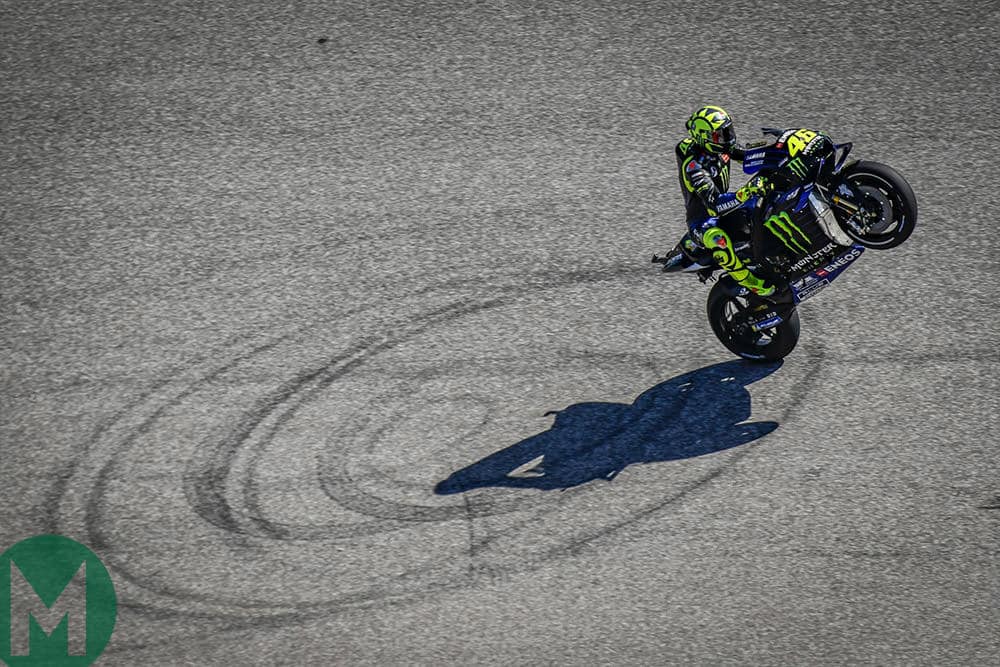 Rossi: maybe he really can win a 10th world title

Two months ago only fully anointed members of the VR46 tribe would have bet on their hero winning a 10th world title this year. But after three races Valentino Rossi is in the hunt – riding a subtly improved YZR-M1 and riding as well as ever, maybe even better than ever. And the winner of Sunday’s race was young enough to be his son.

A close-run fifth in Qatar, a battling second in Argentina and a happy but disappointed second in the USA put him second in the championship, three points down on Andrea Dovizioso. Three races may not mean much in a 19-race season, but there’s no doubt that Rossi and the M1 are stronger than they’ve been since the start of 2017, when Yamaha had that false dawn with Rossi leading the championship after the first three races and new team-mate Maverick Viñales winning three of the first five races.

So how come is Rossi so fast again? Because the M1 doesn’t look any different from last year, apart from its black paintjob.

Even last season, when Yamaha seemed totally lost, it wasn’t a million miles off. Its actual results were poor, but its race times weren’t always so bad. Its difficulties were usually amplified by MotoGP’s ridiculously close racing. For example, Rossi’s fourth-place finish in Thailand was another failed effort to climb the podium, but he crossed the line 1.5 seconds behind winner Marc Márquez, a disadvantage of 0.06sec per lap.

In fact Thailand was perhaps the beginning of the end of Yamaha’s longest victory drought since it entered the premier class in 1973. Viñales pretty much turned his set-up upside down at Buriram, shifting dynamic load to the rear of his M1, which allows him to use the grip of Michelin’s rear slick to stop and turn the bike. A few weeks later Viñales won his first race in over a year.

Since then Rossi has also shifted bike balance in this direction, because it’s better to use Michelin’s rear slick to go fast than the front.

Of course, that’s not everything. Last summer Yamaha expanded and strengthened its electronics group to unlock the secrets of the Magneti Marelli software that had made Ducati and Honda so fast. And the M1’s 2019 engine most likely features a slightly higher crankshaft mass to help during corner entries and exits.

In other words, it’s tiny improvements throughout the motorcycles, not a major redesign.

“We’ve worked on the electronics side to improve acceleration, because we always have problems exiting corners,” said Rossi after the COTA race. “We have also found a better bike balance compared to last year, so the bike works better.

“Also, we work on engine-braking, on acceleration and on the smoothness of the engine. We need time because there are still some areas where we have to improve, but it looks like we are following the right way. We have a good group in the box – for sure the challenge is difficult, but we are improving.”

Inevitably, people are already asking the 40-year-old if he can win a tenth world championship, which would take him past Mike Hailwood, rated by many as the greatest motorcycle racer of all time.

“It’s too early to say,” he added. “There are positives – last year I got only once second-place finish; this year I already have two. And in all three races I was competitive, so we need to continue like this.

“On the other hand, it depends very much on what happens during the season because everyone is always working to improve their bikes. After Austin in 2017 I was first in the championship, but after we arrived in Europe, Honda and Ducati improved and the second half of the season was a disaster for us. So we need to stay concentrated and keep pushing Yamaha to improve the bike, because usually in the second half of the season everybody makes a step.”

Rossi’s current speed suggests he will win a race this year and his refusal to take crazy risks at COTA suggests that his main focus is amassing points to win the championship.

His back-to-back podiums at Termas and COTA made history – he is the first rider in his forties to score two consecutive premier-class since Aussie “Happy” Jack Ahearn rode his Manx Norton to second-place finishes in the 1966 Belgian and East German 500cc GPs.

Ahearn was a tough, grisly star of the Continental Circus who had to resort to all kinds of tricks to survive financially. He stole petrol to get to races and he took no nonsense from corrupt promoters who tried to defraud him of his start money and prize money.

“Always, if you didn’t watch the promoters, they’d try to dud you,” said Ahearn, who finished second in the 1964 500 championship at the age of 40. “They used to divide us into first-class and second-class riders. I was always classed with the top blokes, but at this Swiss meeting the bloody secretary wouldn’t give me the £100 first-class money.

“He wanted to give me bloody half that for second class. I said no bloody way, but he wouldn’t pay, so I hung him out of the window. I think we were on the second floor. I was banned from Switzerland after that.”

Honda’s speed at the first two races suggested that this year’s RC213V is the best bike on the grid, with Márquez running rampant in Argentina. He was on another mission at COTA, 3.6sec in front after eight laps, and then he crashed.

Fellow HRC rider Cal Crutchlow had slid off three laps earlier and then two laps later the luckless Jorge Lorenzo stopped with a mystery technical problem, most likely an electrical glitch. That was all three 2019 RC213V riders out of the race in just five laps.

Both Márquez and Crutchlow lost the front in the first half of the race. Coincidence? The world champion went down at the Turn 12 hairpin, which is preceded by MotoGP’s biggest braking zone, where riders scrub off 170mph/270kmh in six seconds. Márquez was at a loss to explain his tumble.

Third-place finisher Jack Miller suggested that Márquez might have overheated his front tyre at that pace, but the Spaniard said he had no such problem.

“We checked the data and it was very similar to other laps,” said Márquez. “I didn’t do anything stupid – I wasn’t over my limit, I was riding very smoothly, trying to save the front tyre. Mistakes happen, we are human. The most important thing is to learn and to be stronger at Jerez.”

Crutchlow fell at the preceding Turn 11 hairpin, while chasing second-placed Rossi. The rear end got unsettled in the braking zone – possibly on one of COTA’s many bumps – and down he went.

“I made a mistake,” explained the Briton. “But when we follow someone the bike doesn’t decelerate enough, so we have to squeeze the brake harder and longer. And at the moment our bike is unstable in braking. It snaps around in the braking zone, then when it re-grips you can’t keep control of the brake lever. “

Honda’s top finisher was therefore eighth-placed Takaaki Nakagami. It was the Japanese rider’s third consecutive top-10 finish on his 2018 RC213V. Nakagami loves the bike, not only because it’s got a lot more power than the 2017 version he rode last year, but also because it’s equipped with carbon-fibre forks, which give him much more feel in corner entry.

A lousy weekend and Dovizioso leads the championship

Possibly the most surprised rider on Sunday evening was Dovizioso: his lowliest grid position in more than a year, his first finish off the podium since last November and yet he headed back to Europe leading the championship.

COTA has never been a happy hunting ground for Ducati – the Desmosedici needs its brakes to turn and there are too many corners at the Texan track that are attacked without brakes, so it’s difficult to get the bike through those corners at a good speed.

On Friday Dovizioso was 11th fastest, eight tenths slower than Márquez, and still losing the front much more often than he would’ve liked. And he had no chance of redemption on Saturday morning, because stormy weather forced the cancellation of FP3, so the 33-year-old had to qualify from Q1 and failed to graduate to Q2. That left him 13th fastest, his worst grid position since Argentina 2017, when his fate was also decided by foul weather.

His saviour on race day was Gigi Dall’Igna’s holeshot gadget, which rocketed him into eighth at the first corner. By the chequered flag he was fourth, less than a tenth behind Jack Miller’s GP19.

“There are positives and negatives from the weekend,” said Dovizioso. “Our bike is difficult here – it’s a bit more balanced than last year but it still has the same DNA.

“Marc showed he doesn’t always have everything under control, which is a positive for us. From Jerez we can be more competitive. The negative is that the championship is different now.